The first time I went to Belgium was with co-workers in 2013 (recap here) and from that trip (which included stops at the Chimay brewery, Brussels and Bruges), I really wanted to go back with John. I knew that he would like Bruges – so when my mom came to visit in 2015, a plan was hatched – a long weekend in Belgium before John went home and my mom and I continued on to Paris. We then returned to Bruges in 2018 with a group of friends for the Bruges Beer Festival (I don’t care what anyone says – Belgium beer is the best).

Entering into Belgium from Germany.

When: July 2015
Hotel: B-Apartment Hotel
Why Belgium: When my mom comes to visit, I try to plan an itinerary that is packed to see as much as we can while she is here. I really wanted to go back to Belgium because I think it is a bit underrated, so it was a really natural segway to open the trip in Bruges and Brussels before taking the train to Paris.

The Trip: Brussels, capital of Belgium and the European Union, is not a large city, and is perfect for a long weekend (with day trips thrown in), and honestly – you only need about 24 hours to see everything Brussels has to offer. This is why it is smart to combine Bruges and Belgium. because neither are particularly large. Because my mom and I were going to take the train to Paris, it seemed smarter to stay in Brussels versus Bruges for the ease of traveling.

The first full day of the weekend was going to be spent in Bruges, which is an easy train ride from Brussels. (Except – it was one of the hottest summers in European history, and the train car we were in had no air conditioning. Thankfully it’s not a long ride, but it was hot!!) The train station is about 2 kms from the historic town centre, but the walk is really nice. Bruges is not large at all and is easy to explore in a day. Our plan was to hit the following: Grote Markt (the market square), The Church of our Lady (with Michaelangelo sculpture), Begijnhof (neighborhood with white houses),  and the Basilica of the Holy Blood. Rounding out the plan was making sure to see Bruges from the Rozenhoedkaai, where you get that postcard perfect shot of the canals, swans and boats. 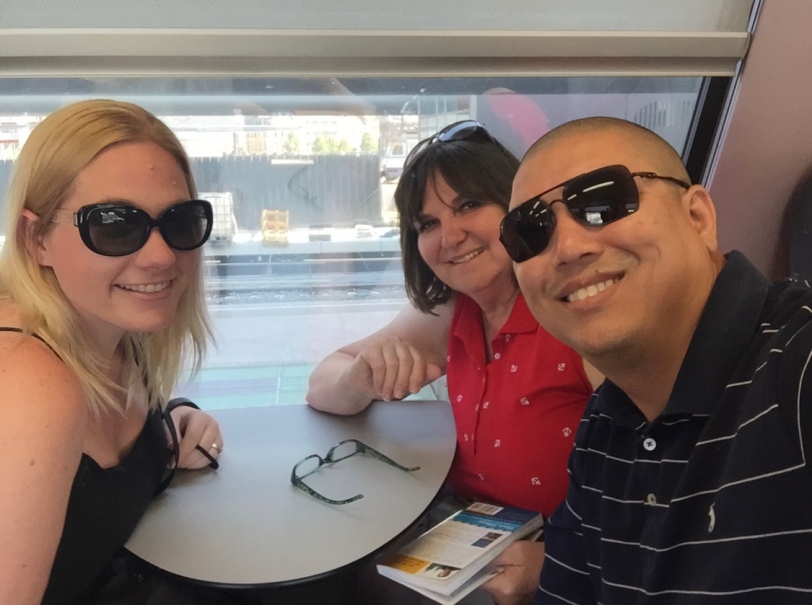 Group shot on the way to Bruges!

If you don’t enjoy as many waffles, fries, chocolate and beer while in Belgium, you’re doing it wrong. 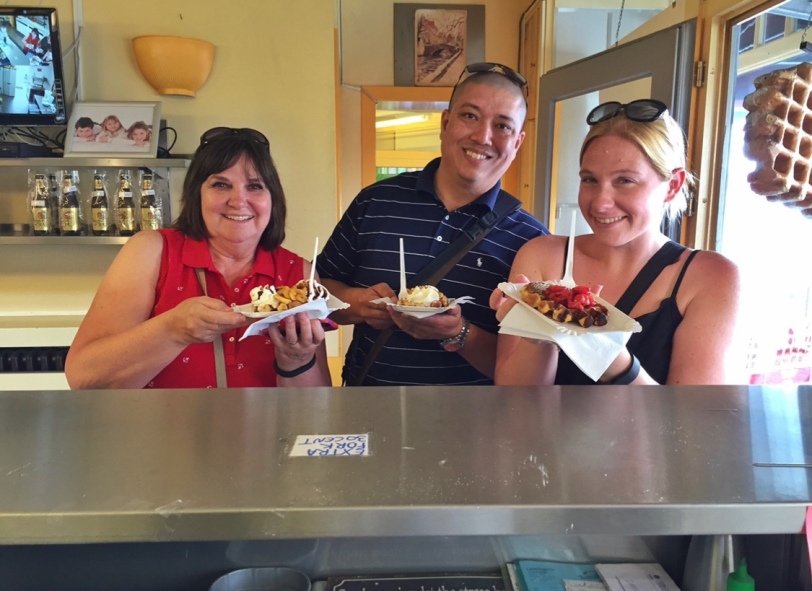 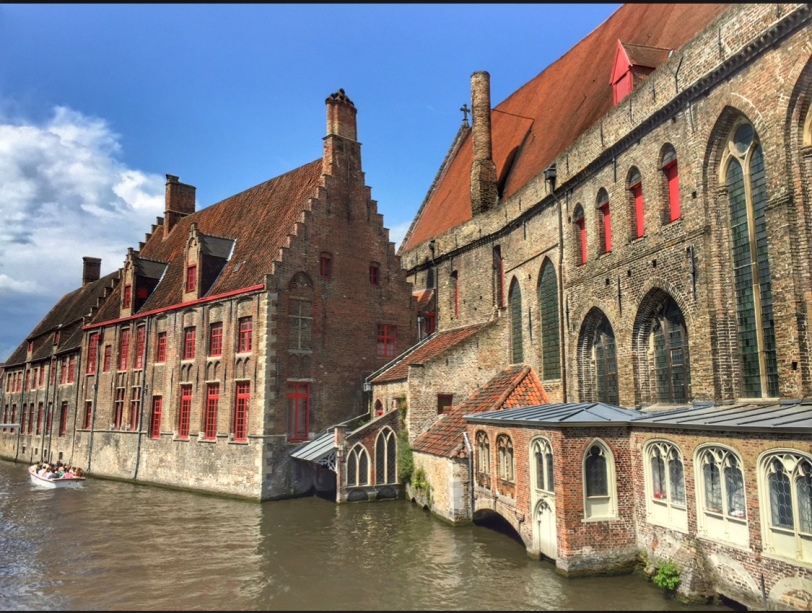 Bruges has so many picturesque places.

Perfect Bruges photo with the canal and swans.

Happy to get to explore this with him too!

Walking in the main pedestrian area. 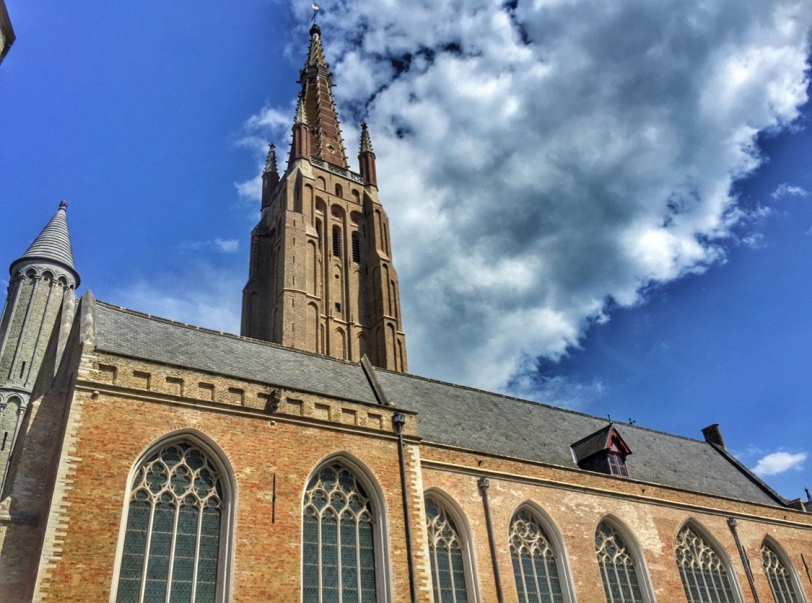 The Church of Our Lady 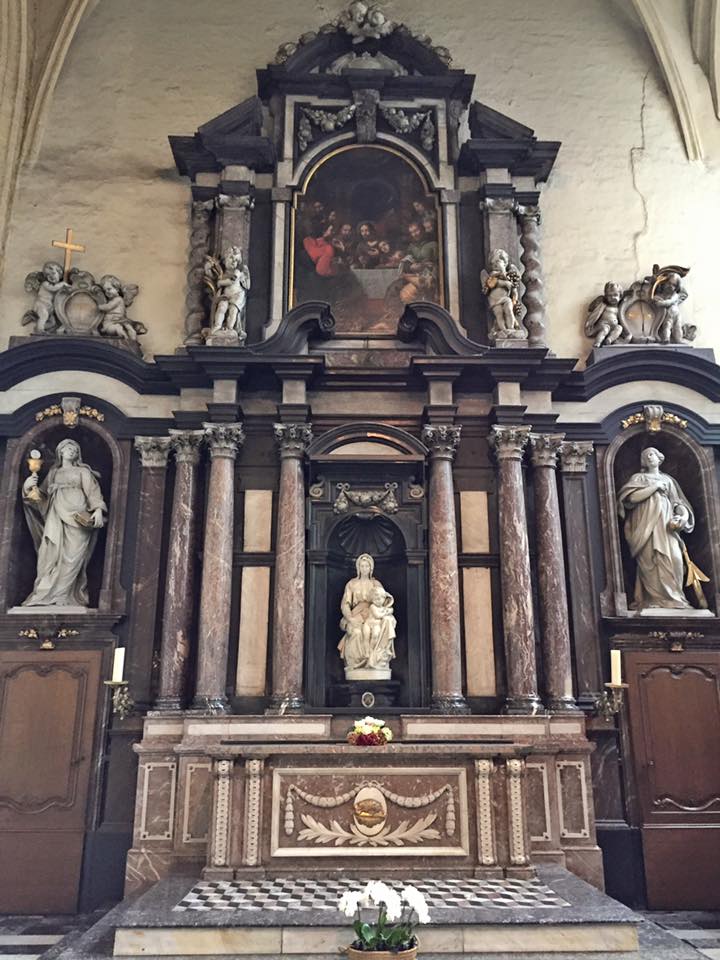 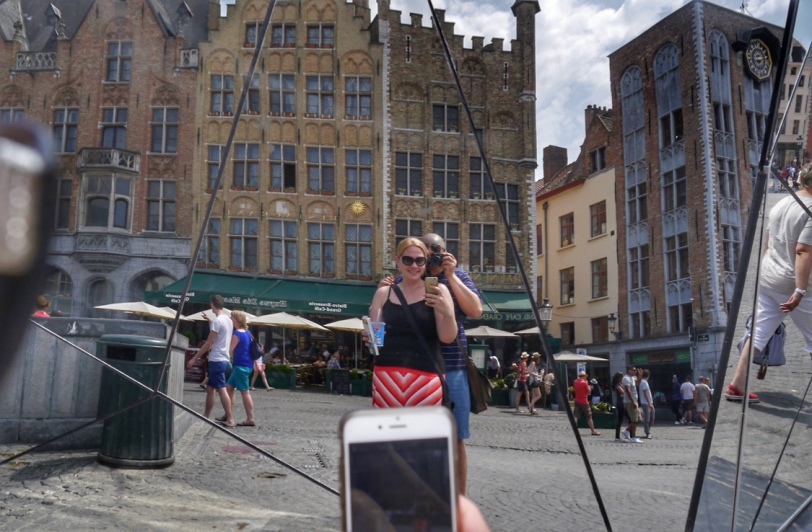 Silliness in the main square 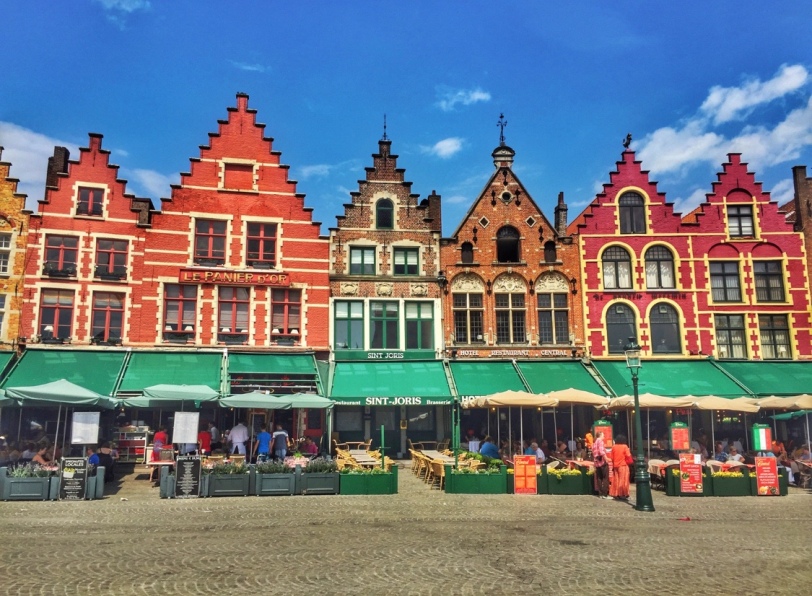 My favorite part of the market square.

You have to have beer in Bruges – even my mom, who doesn’t drink beer, tried the cherry beer!

Basilica of the Holy Blood – it is really almost plain on the outside, tucked in a corner. 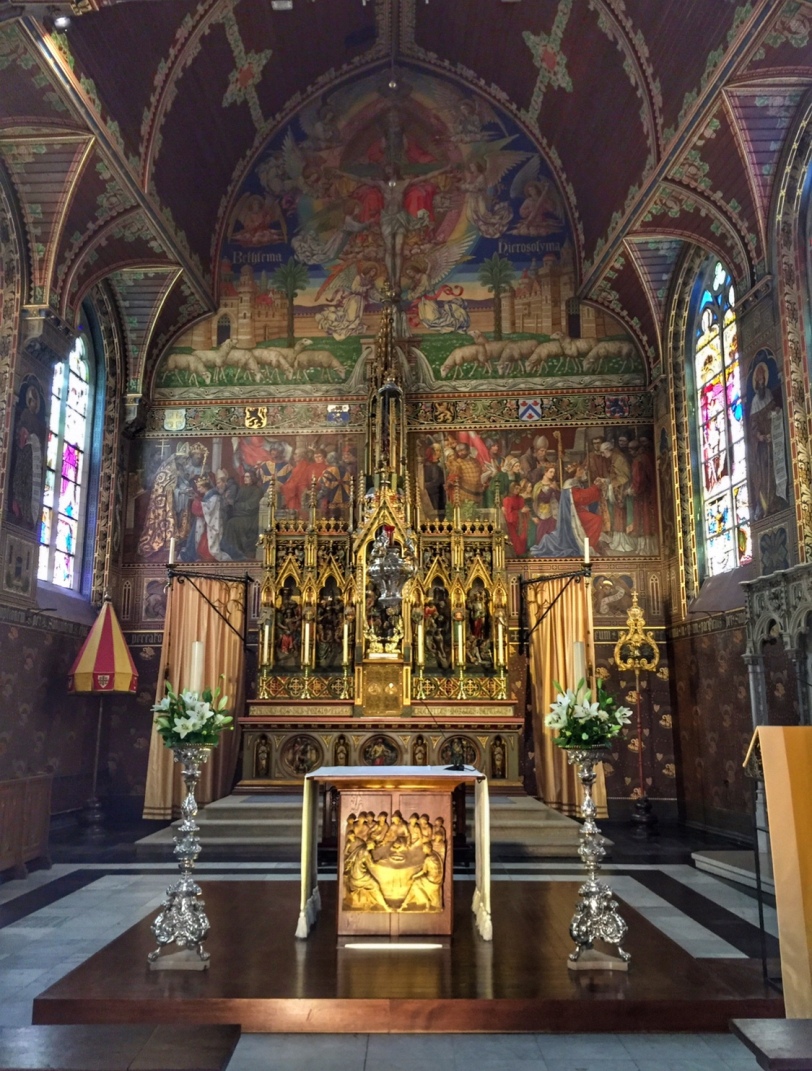 Basilica of the Holy Blood 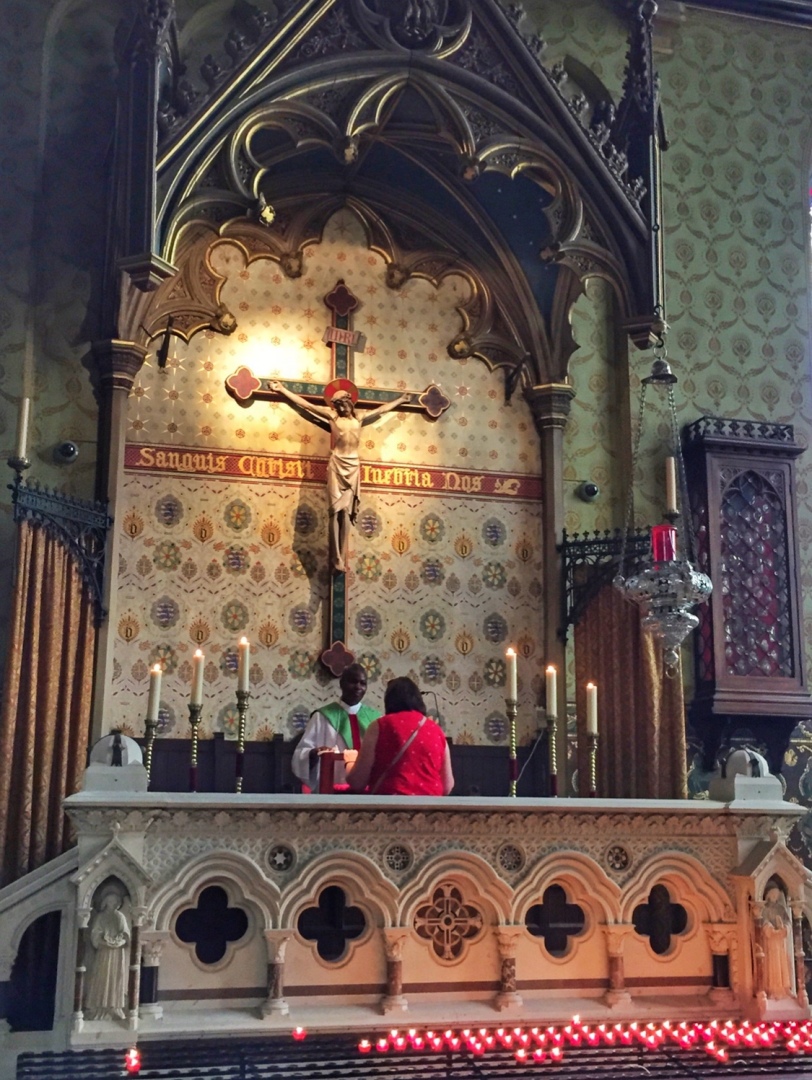 Mom at the alter in the Basilica of the Holy Blood – it is said to be Jesus’ blood.

Walking into another main square.

The buildings are gorgeous.

The next day was all about Brussels – starting with the beautiful Grand Place, arguably one of the prettiest main squares in all of Europe. We were going to find Manneken Pis, see the comics made famous in Brussels, wander through the Galeries Royales Saint-Hubert, and once again find all of the waffles, beer and French fries we could.

Our hotel was only a couple of doors down from this, and one of the mornings I went for a run, there was a race going through it, which was fun! 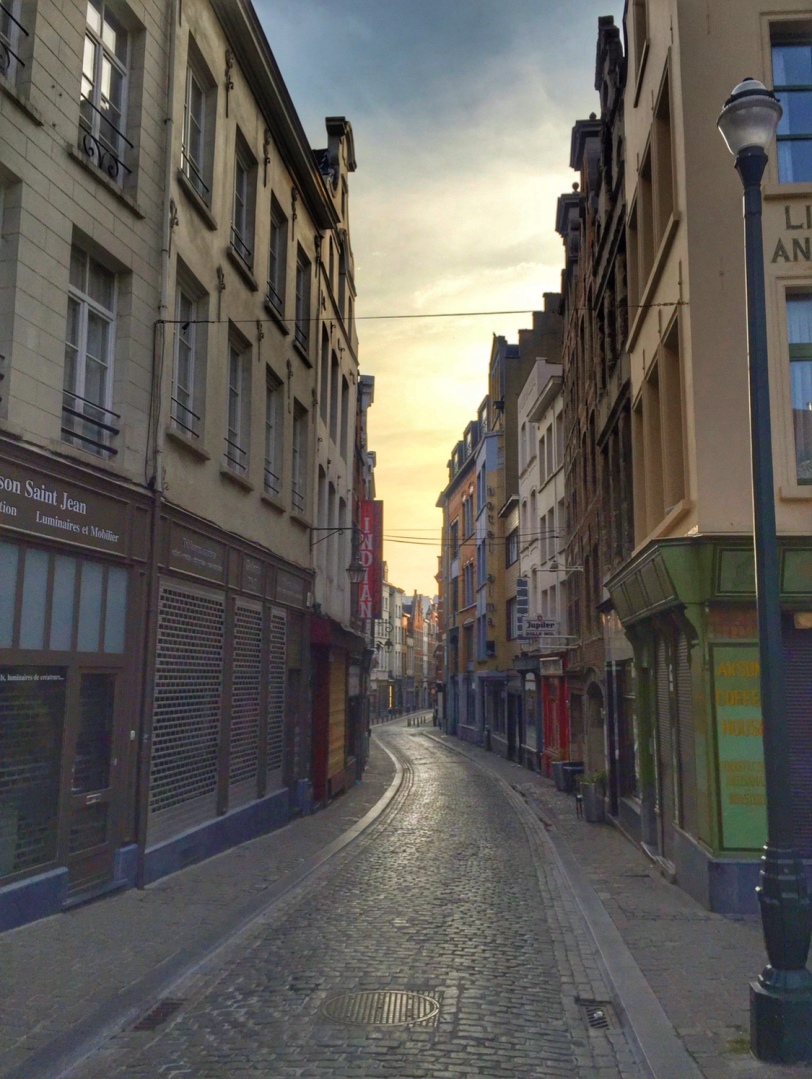 Brussels is an interesting contrast – the main pedestrian area is super cute, but get on the outside, and it is not so nice. 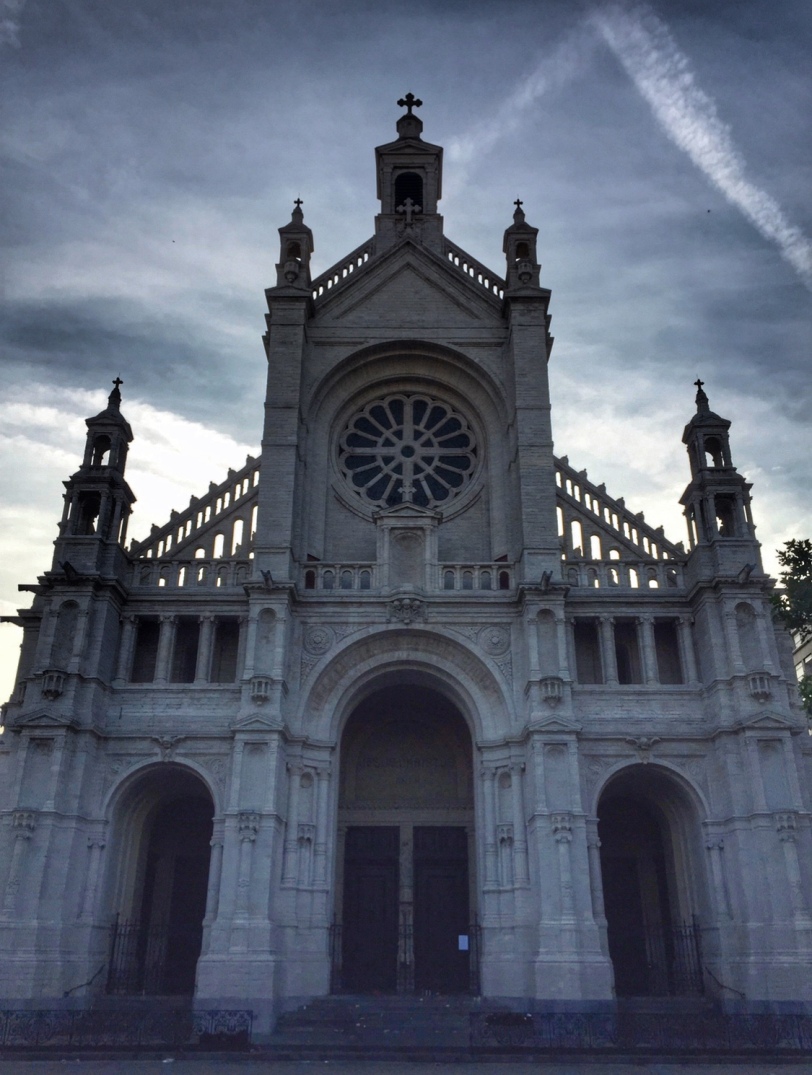 A pretty church in town!

Entry to the Grand Place 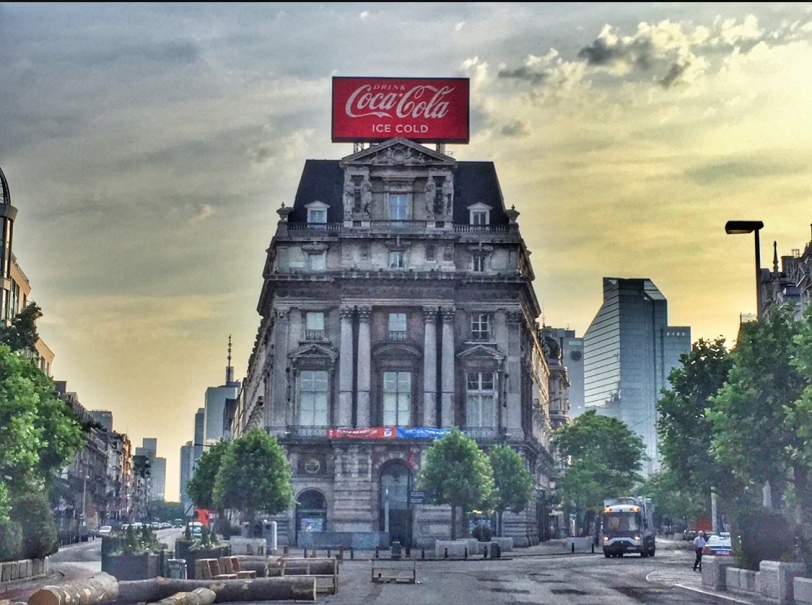 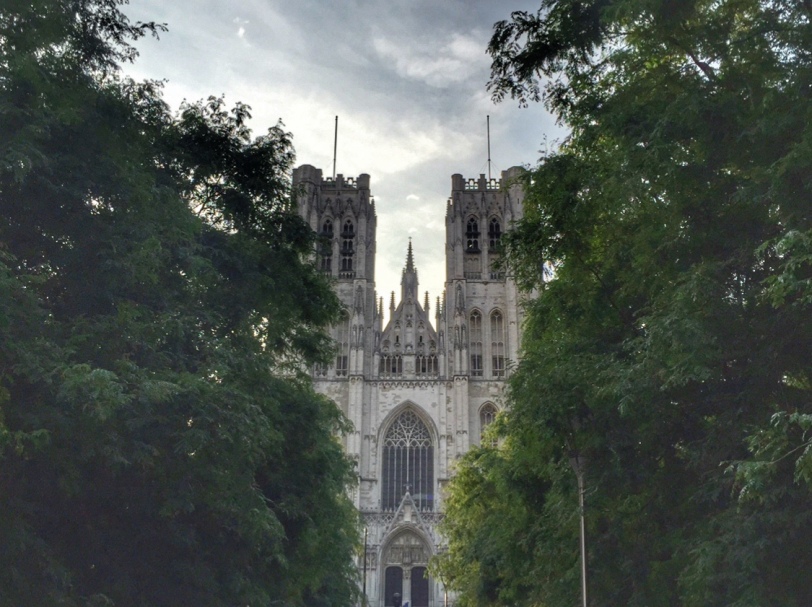 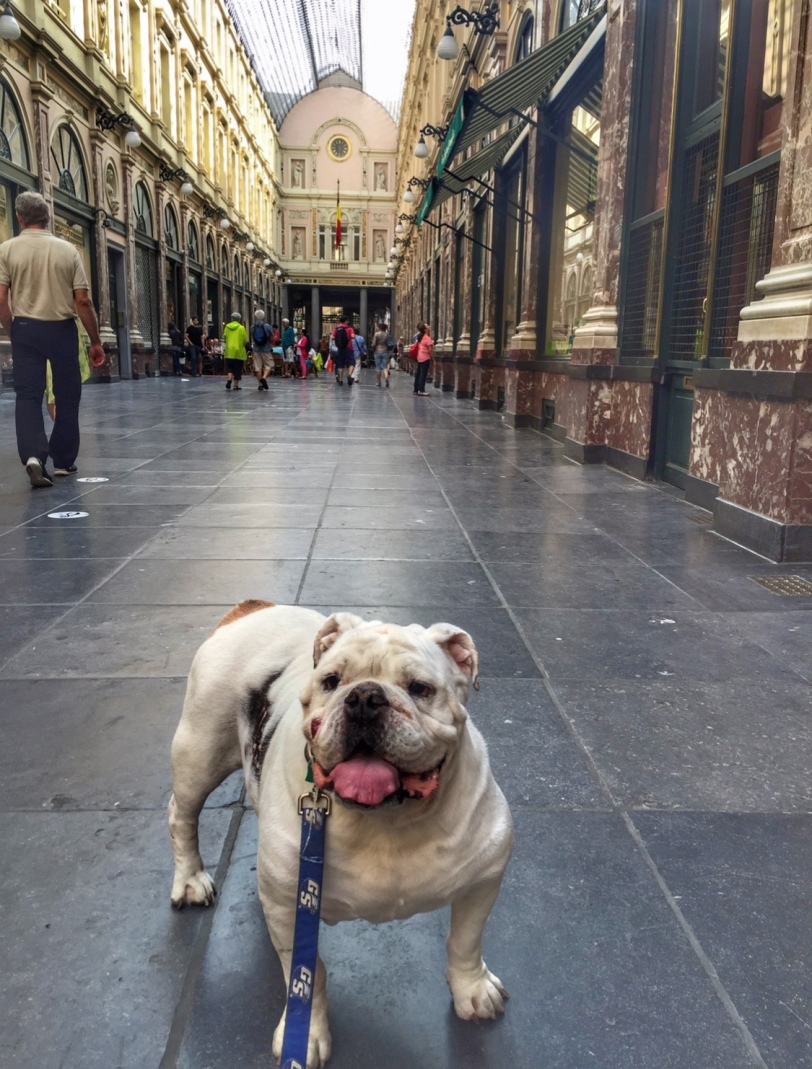 Caesar was a rockstar in Brussels…by the third day, people were recognizing him and calling out to him…he was loving it. 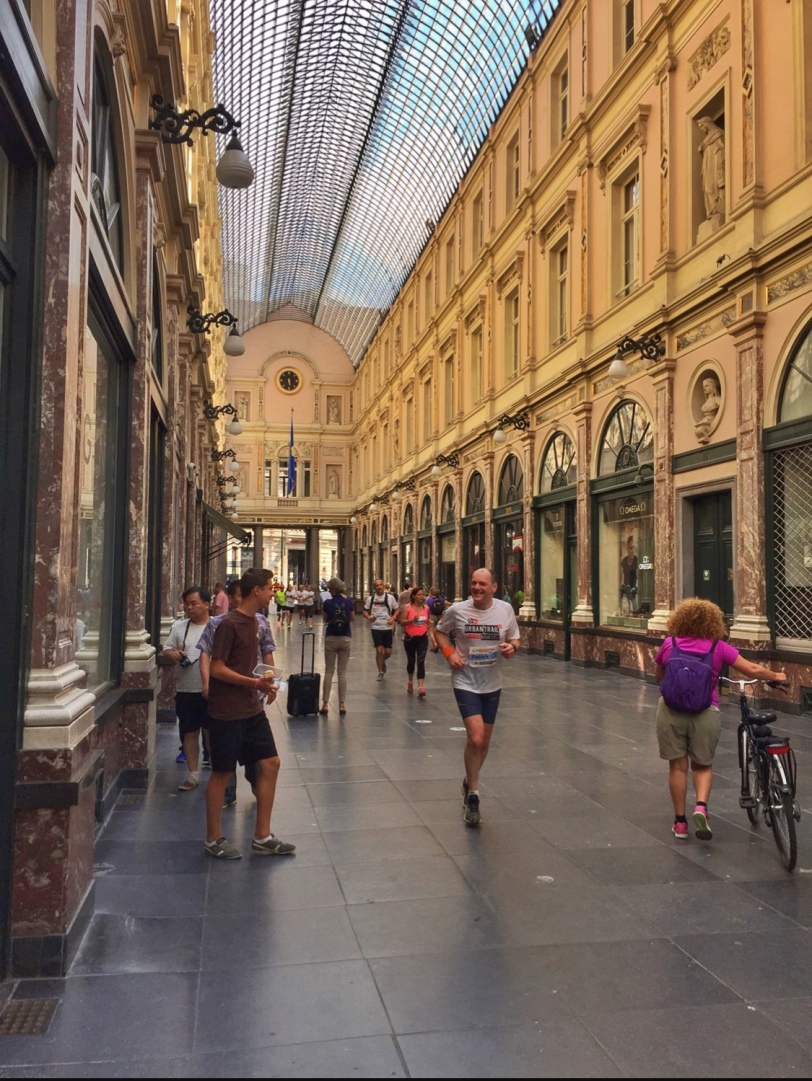 The race through the Galeries 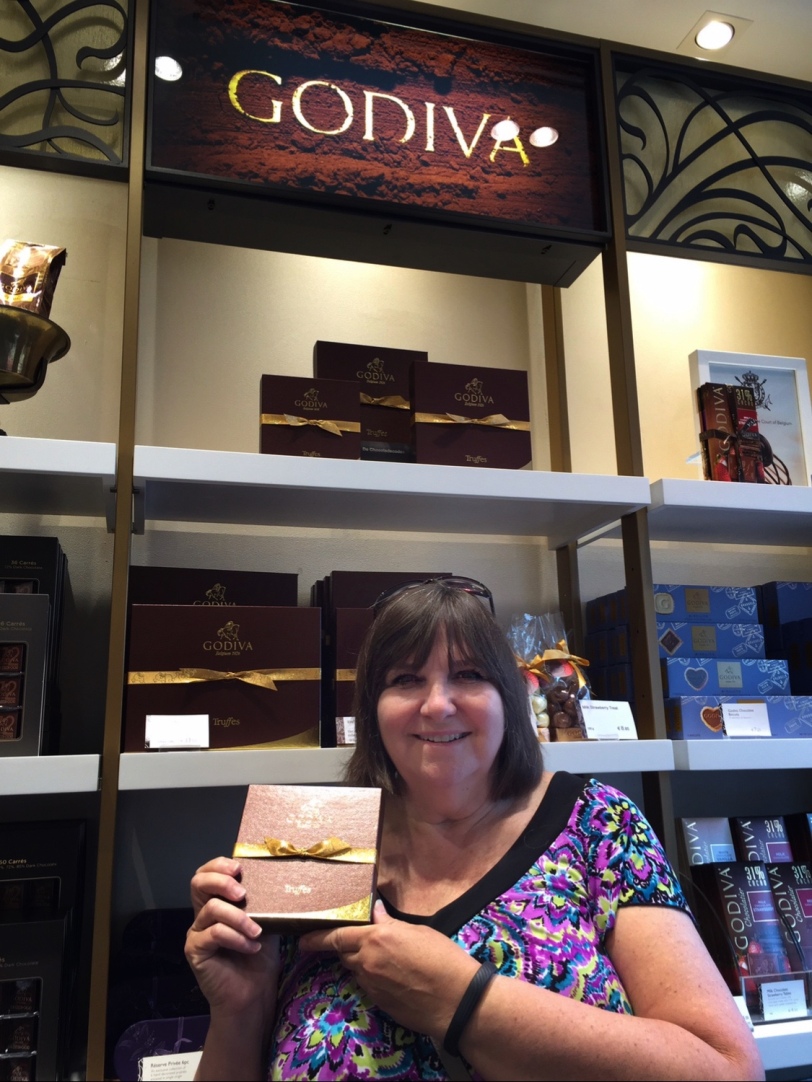 There was some kind of tournament going on when we were there.

Look at these buildings! 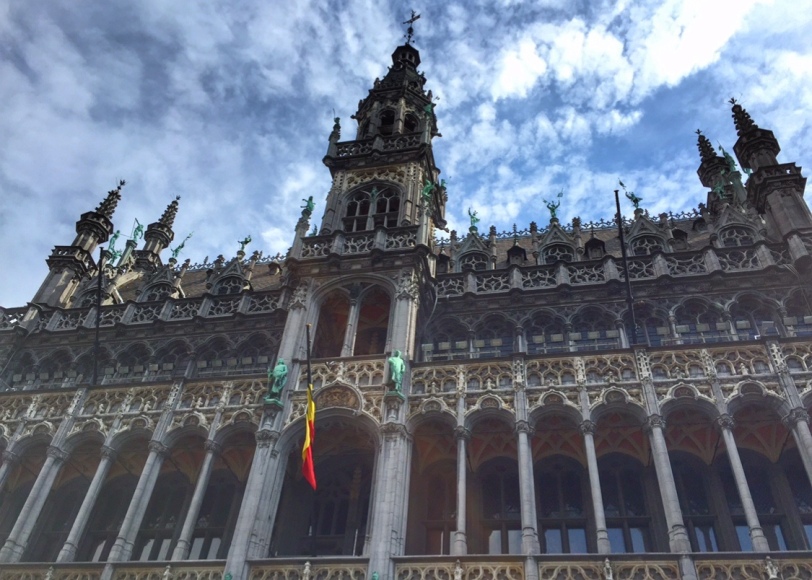 I love how ornate the buildings are!

Selfie in the Grand Place.

Manneken Pis – small, but legendary statue. There are multiple legends surrounding it, but the one I heard first is that a little boy went missing and when they found him, he was urinating.

We had to try it, because it was so weird…I don’t actually remember if it was good or not! 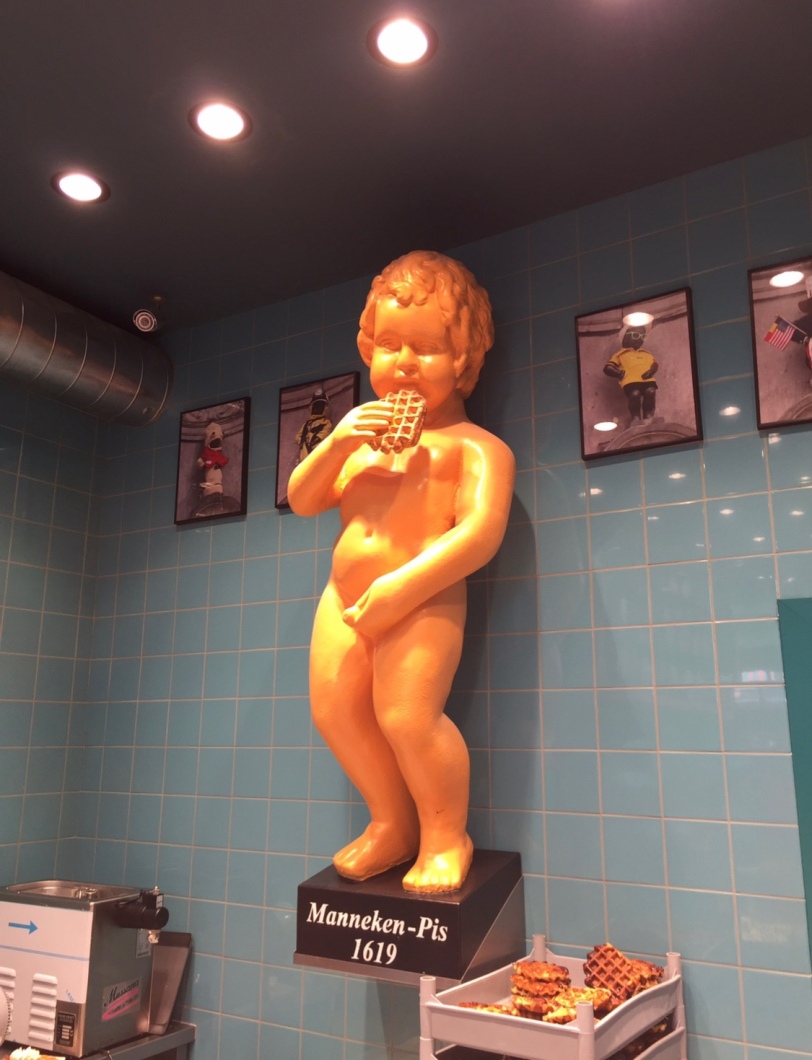 In addition to the real statue, there are replicas all through the city.

When in Belgium…look at those!

So many fun restaurants and bars (and home to the Delirium Bar! 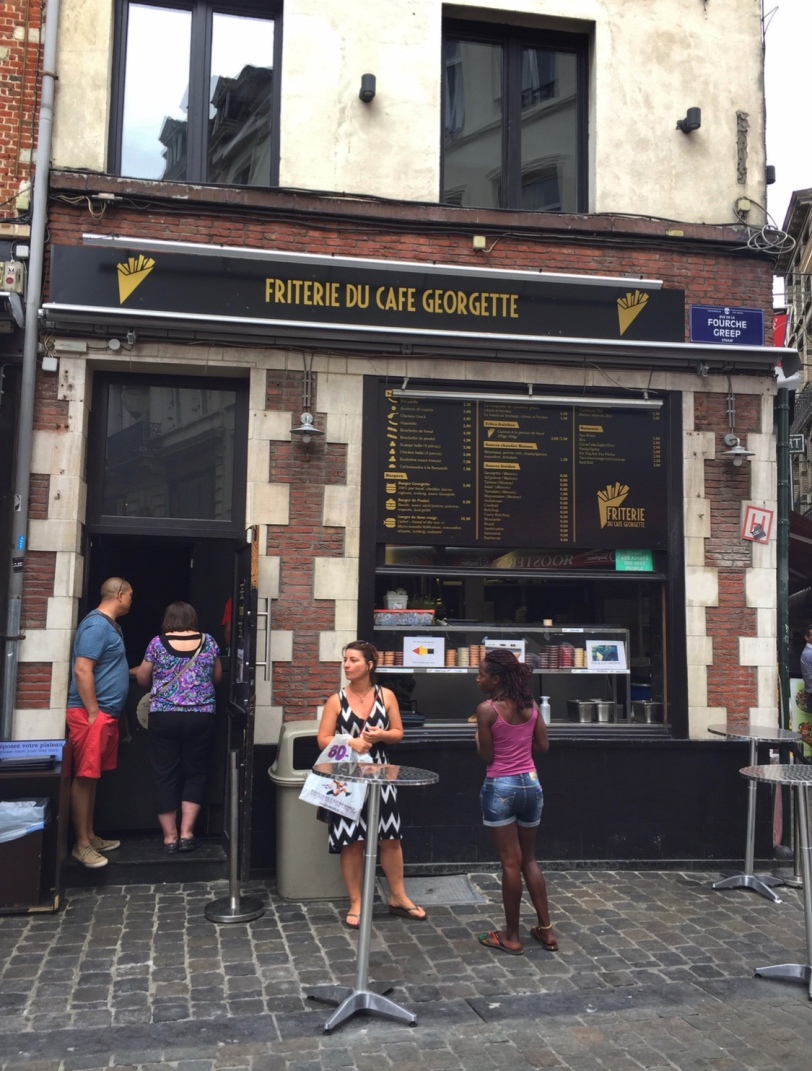 If you want good Belgian fries with LOTS of sauces – this is the place! 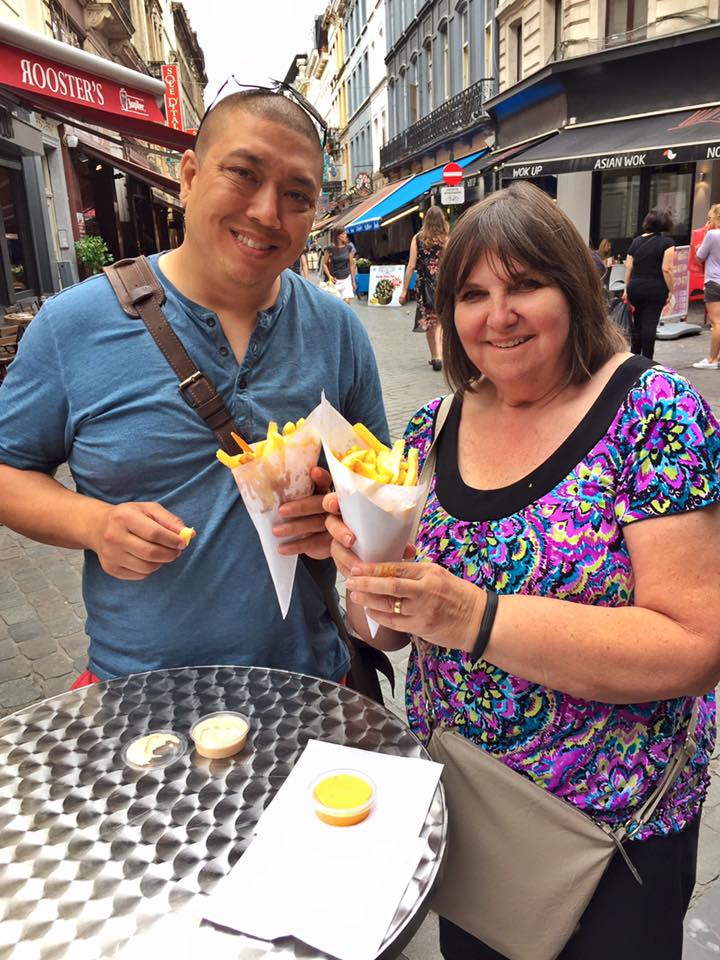 This is the Times Square of Brussels – they had the street blocked off and lots of fun games set up. 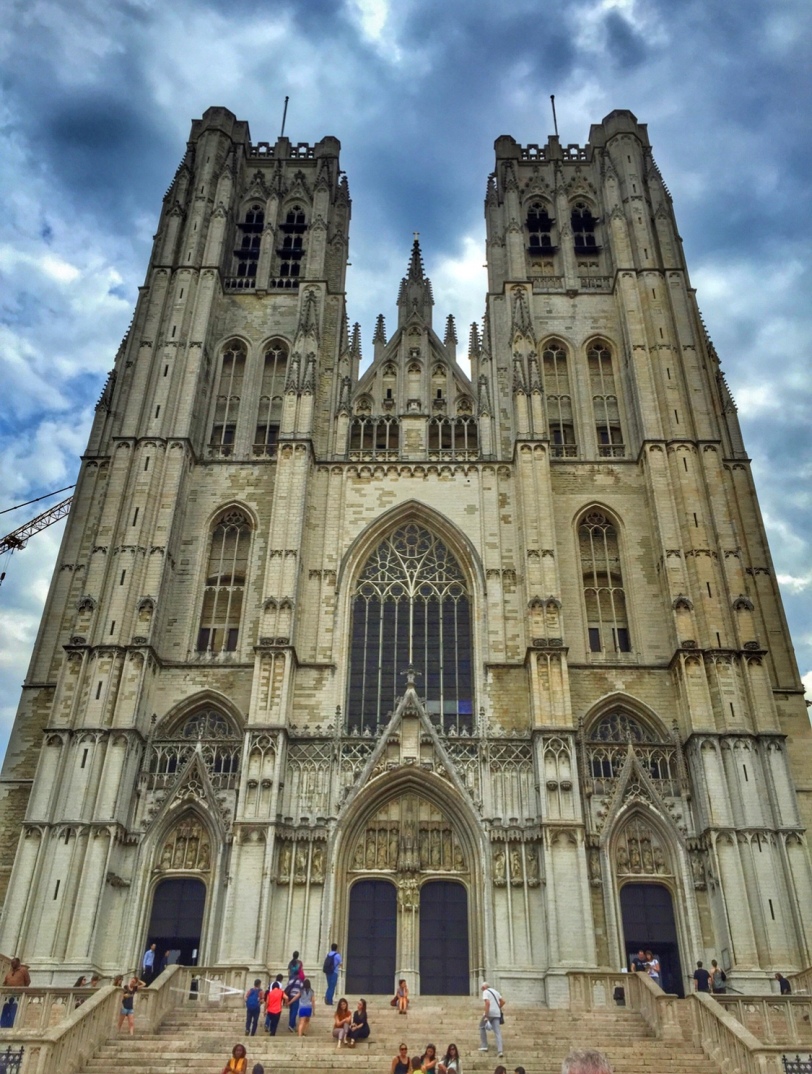 Must visit the Comic Museum when in Brussels!

Lots of Comic Statues in this area of town.

If you go to a grocery store and your cart doesn’t look like this – you are doing it wrong!

Final Impressions: The next day, John was on his way back home, and mom and I were on our way to Paris for a few more days. Bruges was as charming as I remembered, and the Brussels Grand Place was as beautiful as I remembered. I do think that a trip to Europe should definitely include a stop in Belgium – it often gets overlooked when it really shouldn’t.

When: February 2018
Hotel:Hotel Portinari
Why Bruges: It’s hard to find friends that you travel well with, but we were so lucky that we had a large group that got along (and still gets along – we all met up for New Years in Edinburgh this year, and will again this year) while traveling together. We all like Belgian Beer, and over dinner one night, a plan to go to the Bruges Beer Fest was born! 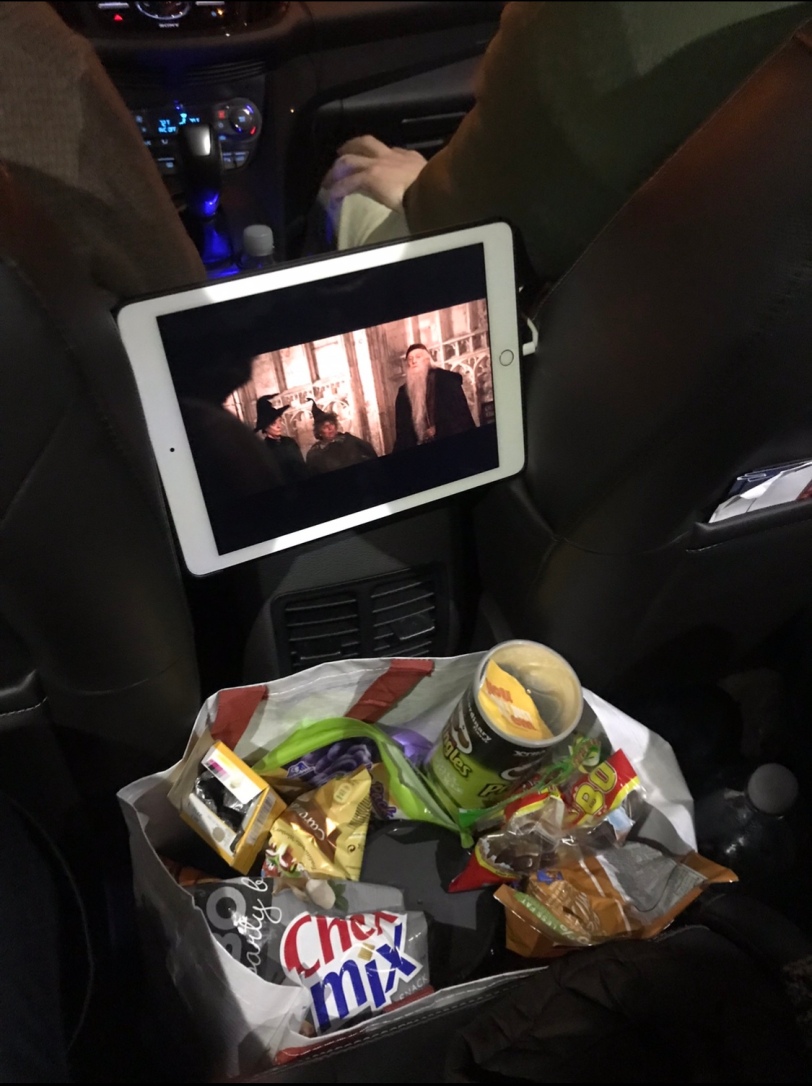 If you’ve ever road tripped with my husband, you know that he will keep you in snacks and Harry Potter!

The Trip: The Bruges Beer Festival is often touted as one of the best beer fests in all of Europe. More than 80 Belgian breweries participate and there are more than 300 types of Belgian beer available. When you buy the package, it comes with a beer festival glass, a thick guidebook outlining all of the participants and their beer, plus five tokens that equalled five tastings. It was held in the famed Belfry (made notorious in the movie In Bruges), as well as in large heated tents in the middle of the market square. All I needed to see was that there was a stand offering the elusive Westvleteren beer, and I didn’t need to try anything else. (You can only get the beer at their monastery, and you first have to make an appointment with the time you will be there, as well as the make of your car and your license plate number – the beer is so worth it, though!) 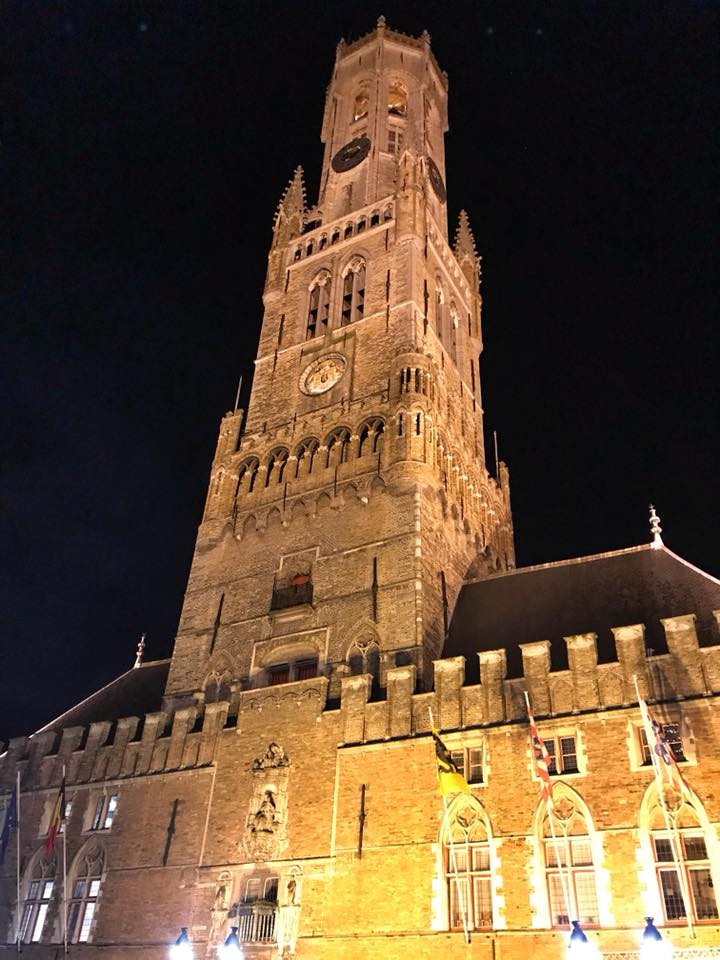 My favorite part of Bruges!

I love all these girls so much – traveling with them together and individually is so much fun!

John and I spent a night in Tongeron, where this is made – an equally delicious beer!

The next morning waking to the festival!

Just a reminder of how cute Bruges is!

Johnny and me and a cute, cobblestone square

We made it to the beer fest!

Of course we had to try the local beer!

With the local beer!

We took a break and explored Bruges…finding out way to the beer museum! 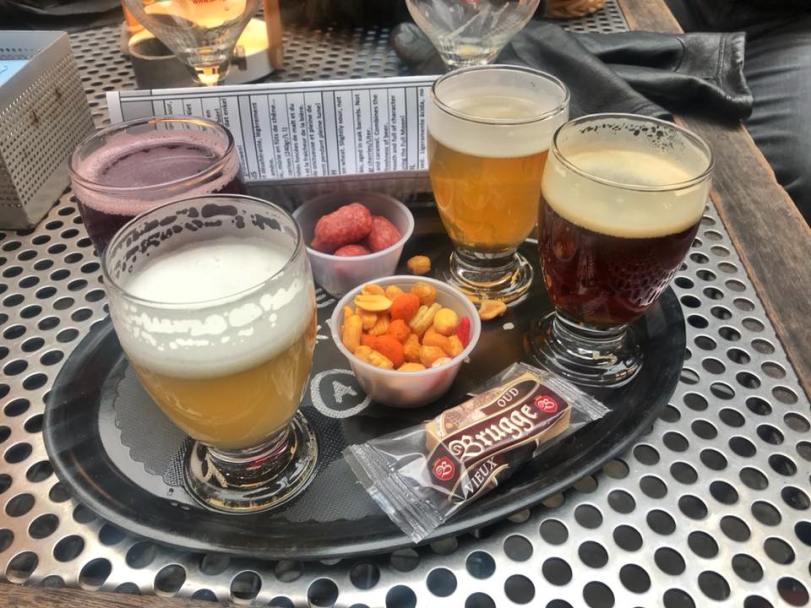 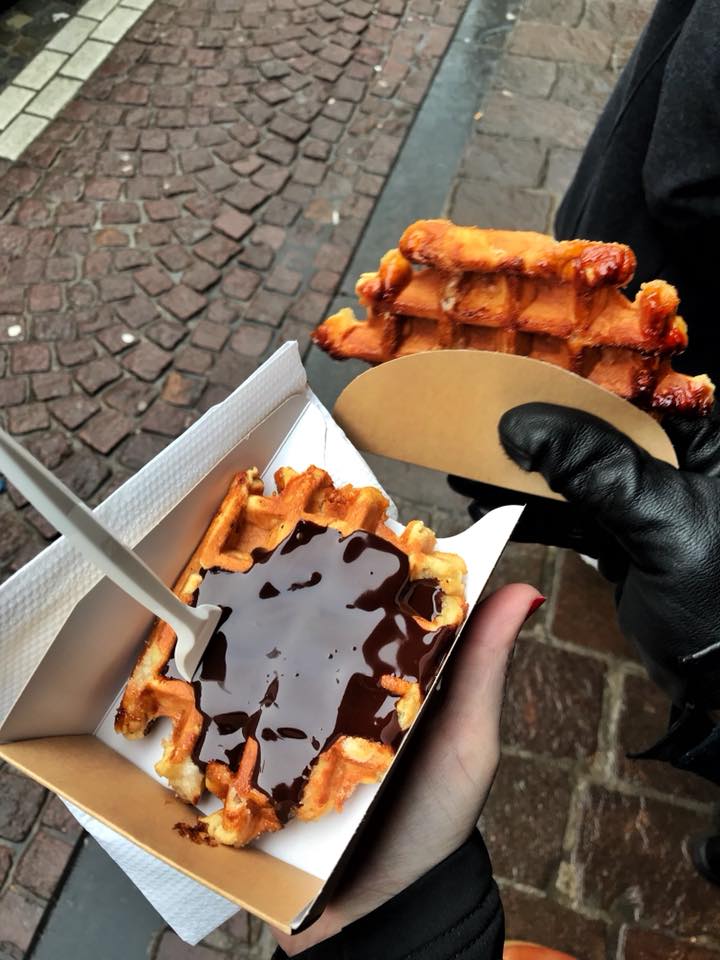 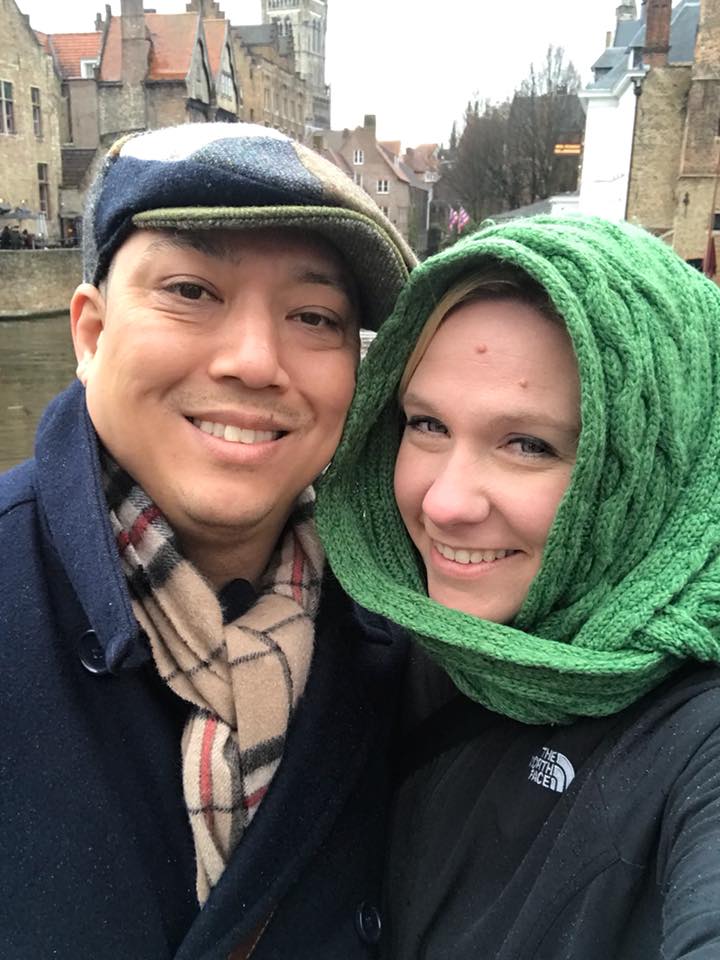 It was rainy – my scarf came in handy!

Even on a gloomy, rainy day – this is so pretty! 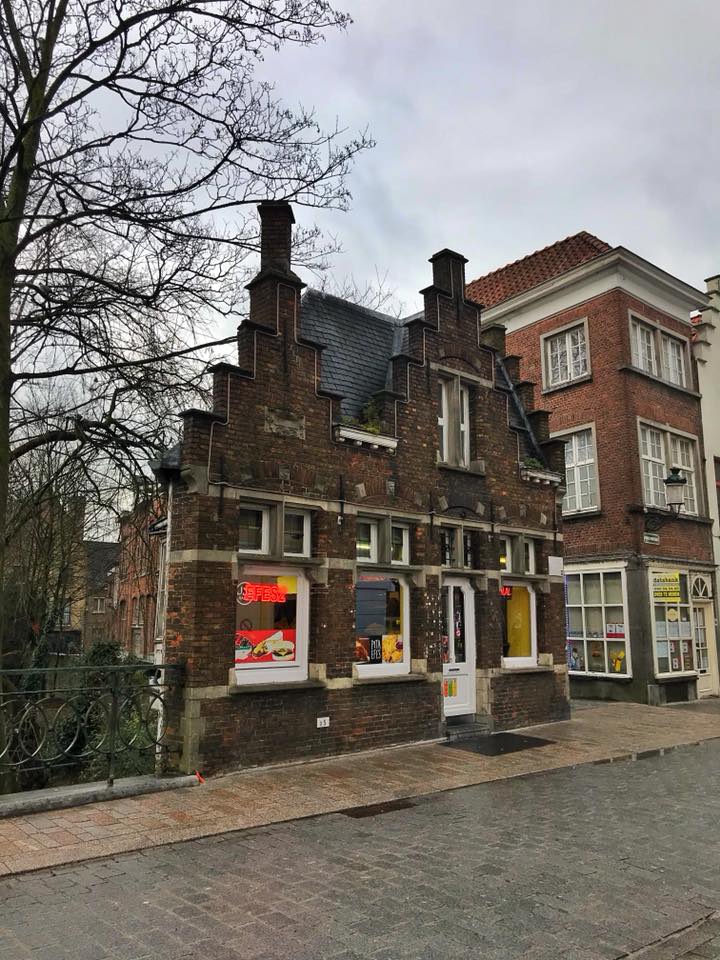 This cute building is a sandwich shop! 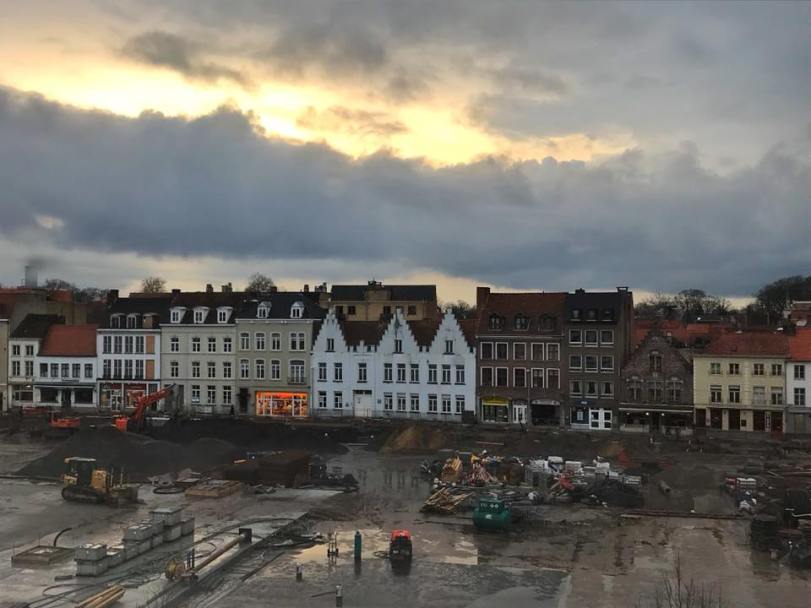 Sunset from our hotel.

This is an absolutely adorable restaurant in Bruges – it’s so cute!

The next day, we left Bruges and headed to Brussels to pick up some beer before heading home, and we needed to stop here!

Of course we stopped here (But find a supermarket to buy beer! The touristy beer shops are so overpriced!)

Cheers to our friend Brian for this picture! 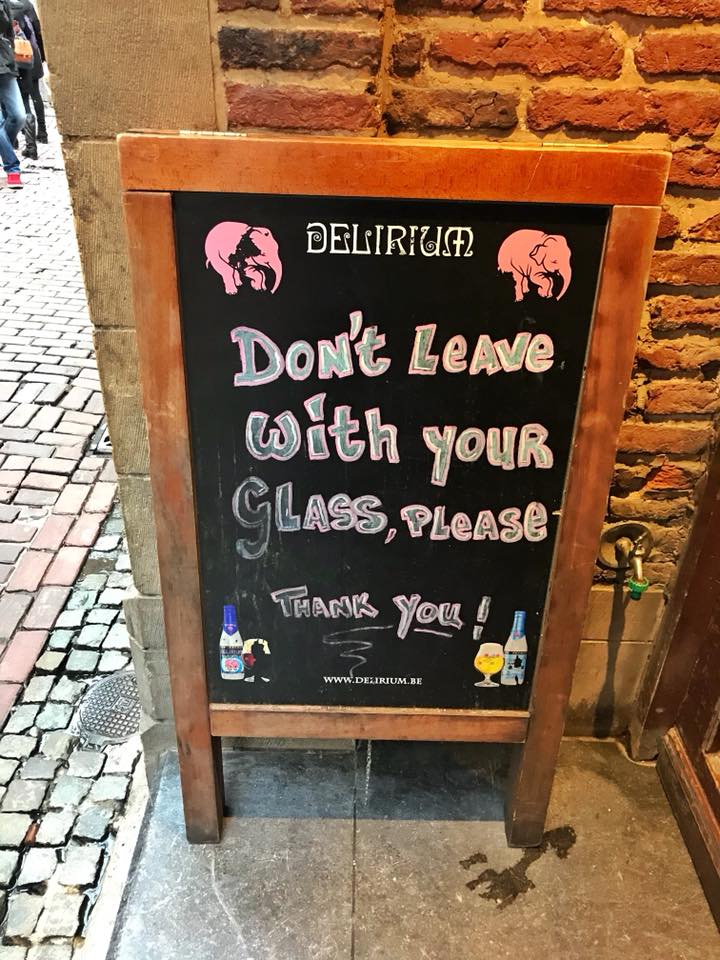 The girl version of Mannekin Pis.

Final Impressions: Bruges is great place for a group trip, with or without a beer fest because there are so many fun bars and places to sit and hang out. Just another fun reason to visit the cute city!