Where: Edinburgh, Scotland
When: October 2014
Hotel: Old Waverley Inn
Why Edinburgh: I wanted to surprise John with a trip for his 40th birthday, but couldn’t pick a place to go that he possibly wouldn’t guess. (However, as I am awful at keeping secrets, this was a silly thing to be worried about…I told him a month before we left!) But, John likes Scotch, the Harry Potter books and Edinburgh was on his places to visit list, so I thought it would work perfectly.

The view of Old Town Edinburgh from our hotel room.

The Trip: So, the trip got off to a little bit of a rough start thanks to my slight miscalculation. Since travel is so cheap within Europe, there is always a better deal (or so I thought), which is why I booked us out of Munich to Edinburgh because of the great airfare deal. But the two-hour trip turned into a 3.5 hour ordeal, and we were exhausted before we even flew out! Note to self – just fly from Stuttgart and pay a little bit extra. It is worth it!

That wasn’t the end of our excitement, however. When we got to the hotel, there were suspicious blood-like stains on the walls and sheets. Yikes! After being moved to a clean, blood-free room – we were just ready to get our Edinburgh adventure going. One note – Edinburgh is on the pound, which has a ridiculous conversion rate for the dollar (almost double!), so finding good, inexpensive accommodations can be hard. I had to sway a bit from my normal Booking.com requirements (Very good or higher rating) to find a reasonable hotel rate in a good location. While I was nervous about the Old Waverley Inn, I was pleasantly surprised…until the bloodstains. Still, they reacted immediately, gave us a discount and put us in a good room with a great view. Not ideal – but the remainder of the stay was quite pleasant.

Edinburgh is not a huge city and could easily be done in 1-2 days (more if you are big into museums), so I worked out a plan for us that was actually leisurely while hitting most of the highlights. One of my new favorite ways to work out a trip plan is to use Google maps to work out a sight-seeing route. Day one looked like this:

With our late start the next morning, and an obligatory stop at Starbucks pre-walk, we had to skip the first stop on our plan – walk up Carlton Hill – to work our way to the start of the Royal Mile and Holyrood Palace (Queen Elizabeth’s summer home). There are amazing views of Edinburgh pretty much all around you. (For those with the time, Arthur’s Seat on the outskirts offers both a challenging hike and apparently, pretty views. We opted out of climbing it.) 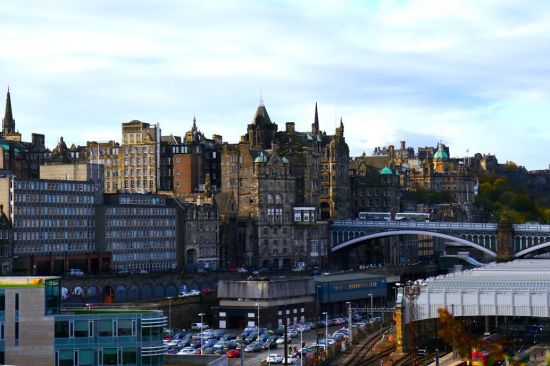 Looking back on Old Town as we walked to Holyrood Castle.

The Queen’s home…I want crowns on the outside of my house like she has!

The Royal Mile stretches from Holyrood to the Edinburgh Castle, and is an adorable cobble lane street with the Closes (alley ways) serving as side streets for pedestrians. 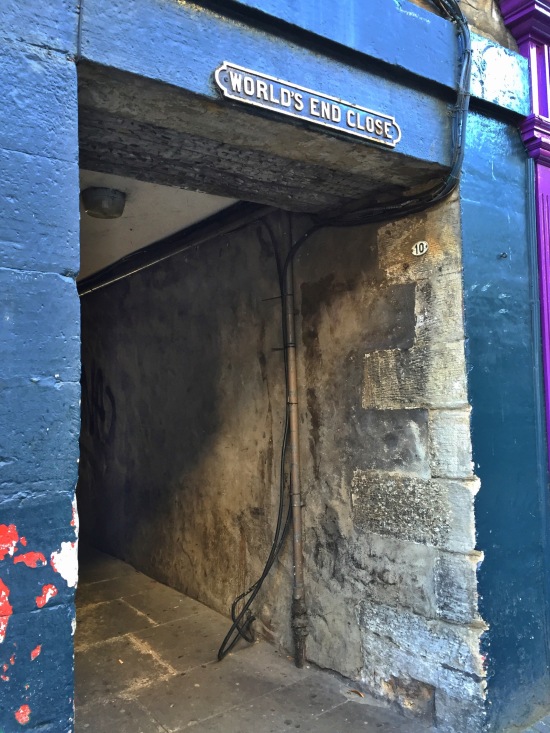 We didn’t go down this Close.

You could see how JK Rowling got her inspiration for Harry Potter in Edinburgh. Walking up the Royal Mile was like walking through a movie set – it was like no where I had ever been before. The storefronts were so colorful but the buildings themselves had a gloomy, medieval and enchanting feel about them.

John did quite well being the statue!

We would have taken even longer that first day wandering and shopping, but we had a destination…the Scotch Whisky Experience! (Buy your tickets online so you can walk right in!) You can choose from several tours, and I opted for the Gold tour, which included a tasting of four Single Malts from the four whisky regions, whisky tasting glass, and additional tastings after the tour. The entire tour lasts about an hour, and starts you out with a ride in a whisky barrel as you learn about the history of scotch whisky. Silly but fun!

Ready to try some scotch whisky!

I’m not a huge fan of scotch, but if you are – this is the tour for you! It seemed like we kept getting tastings as we moved room to room. And I actually learned something on this tour as far as which region created what kind of whisky. The Islay whisky? Two big thumbs down! 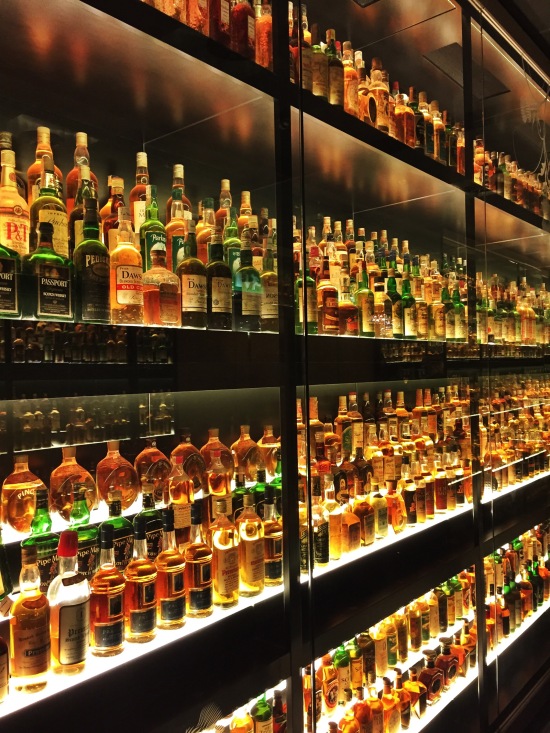 Coolest room ever…I want one in our next house!

Full disclosure – I had a sip, but John finished these glasses!

He’s so educated on Scotch now!

After all of that scotch, John and I figured we should probably find some food before heading into the Edinburgh Castle. We made our way down one of the Closes to Victoria Street and found the most amazing pulled pork sandwich restaurant (it was seriously that good – we ate there twice) for lunch. Not only was the food good, but Victoria Street was another fun street to walk up and window shop! 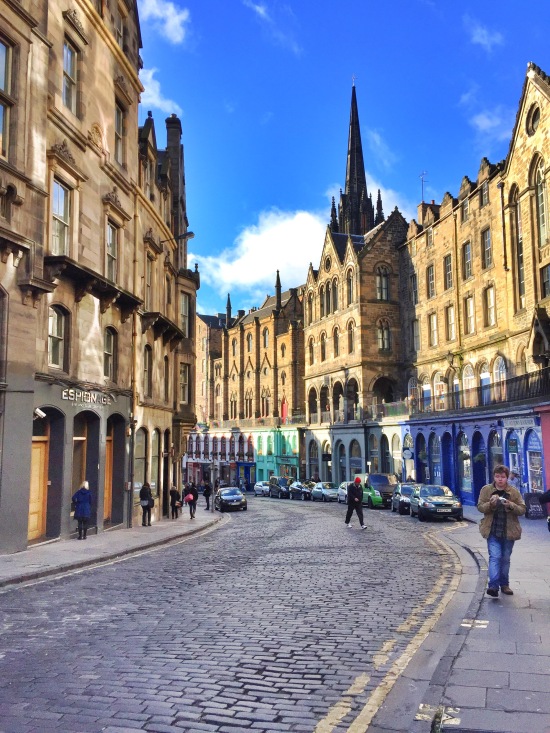 Oink…the line was out the door, and for good reason. The best pulled pork sandwich I have had…and I lived in Georgia for 10 years!

After Oink, we worked our way back to the Royal Mile to make the (slight) trek up to Castle Hill. This is where we discovered the craziness that is the wind in Edinburgh. I have never experienced wind like that…so strong it was pushing both John and me! (Subsequently, none of the pictures of myself that day turned out…I look crazy with my hair sticking in all directions! We made a stop that night so I could buy headbands for the rest of the trip!) However, a guide at the castle just laughed and said, “Welcome to Edinburgh.” I would buy solid hold hair spray by the dozen if I lived there year-round.

Well marked – in case you get lost!

The views from the Castle were beautiful. This is looking at Old Town, with Arthur’s Seat in the background.

That building in the background is the George Herriot school, which JK Rowling used as inspiration for Hogwarts!

The entrance into the castle – with the William Wallace memorial on one side.

The one good picture from the Castle…the rest were crazy-hair disaster photos!

The view of Edinburgh’s “New Town,” and the ocean behind it.

It was getting late, so we headed back to the hotel for a brief break before heading out for dinner. Our travel has definitely changed in this regard as well – we are much more likely now to take breaks instead of powering through to exhaustion, and this has made all of our trips since much more enjoyable.

Of course – the walk back took some time, thanks to multiple much-needed picture breaks! 🙂

The Scott Monument, directly outside our front door. 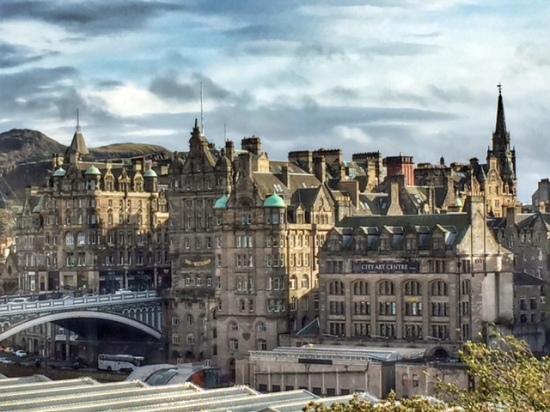 Another look at the Old Town.

Day one ended with a bit of excitement. During dinner, we heard the non-stop buzz of a helicopter and on our night walk, noticed one of the main roads was blocked off and police in riot gear were all over the place. Being nosy, and aided in the multiple Closes, John and I made our way down to the center of excitement – apparently, a man with a gun (unheard of in Edinburgh) was running from the police and was on top of the roofs. We waited with the crowd for some conclusion but 90 minutes later, we gave up. (A good thing too, because apparently the guy was not caught until the early am…I was not waiting in the cold that long!)

The SWAT team getting their gear on to find the fugitive! 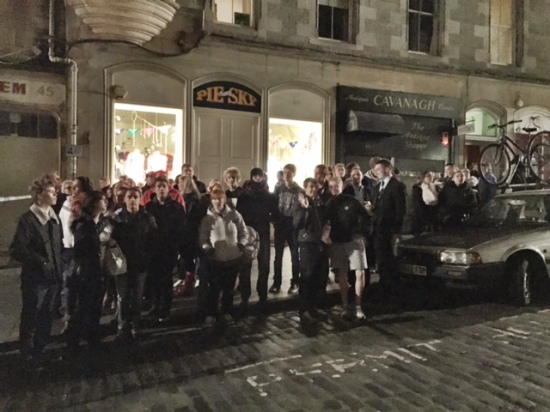 We joined the crowd waiting for the suspect to be caught…it never happened while we were there. 😦

Day one was a great introduction to Edinburgh…stay tuned for the Day two wrap-up with a walk through the origins of Harry Potter and a tour through Edinburgh’s underground!

2 thoughts on “Edinburgh, Scotland (Day One)”