I remember the first time John and I visited a concentration camp clearly.

We had decided to go to Dachau, the first concentration camp that Hitler opened, on our way back from a weekend in Munich. After touring the horrific wooden barracks that paraded as living quarters, and walking past exhibit after exhibit outlining the Nazis atrocities – horrific acts of violence that only truly sick people could imagine and put into practice – and then walking into the crematorium, I could feel myself getting physically sick. How anyone could have survived is unimaginable to me. Especially when I could only take it for 90 minutes.

So, when John and I picked Krakow, Poland to visit for our most recent trip, John said he wanted to go to Aushwitz-Birkenau while we were there. I wasn’t excited (I mean really, who would ever be excited?) but I definitely knew we had to visit – everyone should.

Initially I had planned on us just doing a tour on our own, but instead ended up signing us up for an English tour – which was definitely the way to go. If you tour Aushwitz-Birkenau on your own, I think you will lose out on a lot of information. Not to mention, so many people are on tours, that you will spend more time dodging the tour groups that you may not see as much either.

The entrance to Aushwitz I. The first sign of the Nazi’s evil deception. “Arbeit macht frei” means “Works brings freedom.” Sadly, that was not truly the case.

These numbers are so staggering that as many times as you see and hear, it still just doesn’t make sense.

Aushwitz and Birkenau are actually two separate camps. Aushwitz I was opened in 1940, while Aushwitz II (Birkenau) was opened in 1942 after Hitler declared that the “Final Solution” be enacted in Europe. One in six prisoners who died in the Holocaust were killed in Birkenau.

The tour begins at Aushwitz I, and you move through various former barracks, which have been turned into various exhibitions. Unlike Dachau, this was less of a museum and more of a memorial. Most of the rooms you could take pictures in, but others they asked you not to out of respect for the victims. One such room was where the hair of the victims had all been moved. I had to turn away after the initial view – I started tearing up and knew that if I kept looking, I probably wouldn’t make it the rest of the way. After the prisoners were killed, the Nazis would shave their heads. Eventually, the prisoners who were allowed to live also lost their hair. The Nazis would then use it for various objects. Disgusting.

Then came the room of the victims shoes. They had been collected and traded for the camp prisoner wear. It was equally upsetting – made by worse by the baby shoes that were held in a separate case. I didn’t take pictures of those, although you could have. We then walked past the suitcases people packed,  thinking they would be able to keep their belongings, and the eyeglasses they needed, and the prosthetics so many came in to the camp wearing. 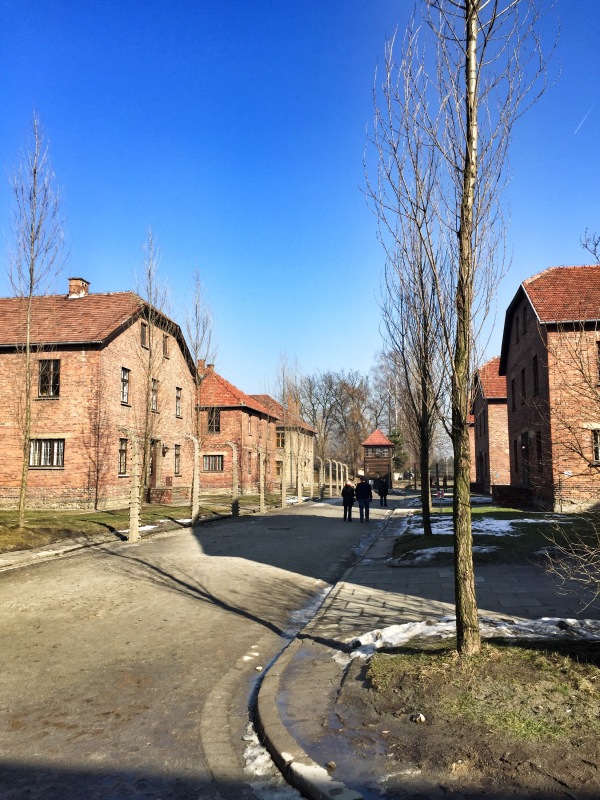 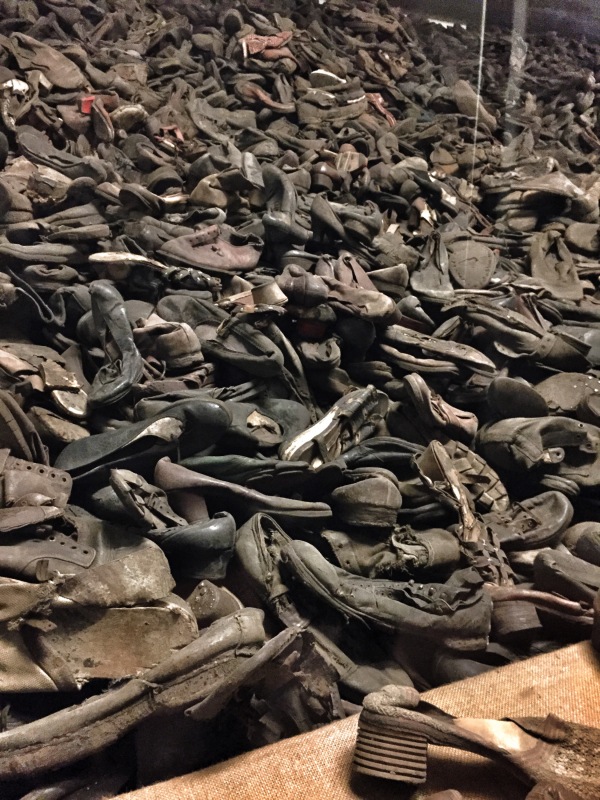 The shoes of the victims.

Another evil deception. The victims were told they were being moved to a new home in the East, and to pack no more than 25 kg. People brought everything from food to jewelry – none of which they would see again. 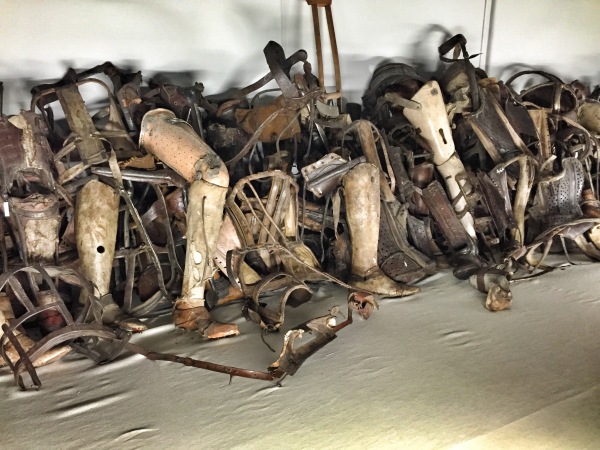 The glasses taken from the victims.

The firing wall. Prisoners would shower before being lined up at the wall and killed. This has since been reconstructed. 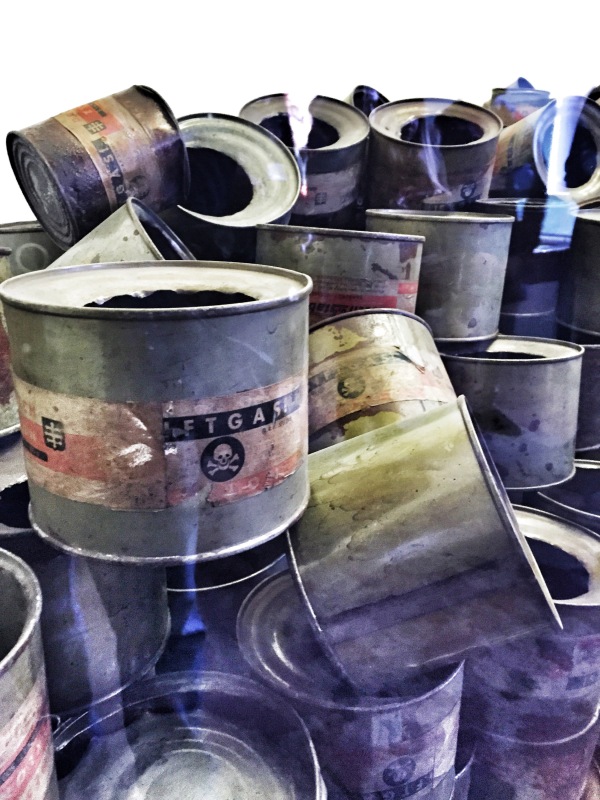 The cans that held the Zyklon-B that was used in the gas chambers.

These signs were in German and Polish, but in reality, prisoners would get beaten for not following directions – even though most of the time it was because they didn’t understand the language.

This was where the victims, who had been forced out of their homes and into cattle cars, found themselves separated on a platform. Then, depending on the way the thumb of one man went – these poor people were either sent to a terrible life where death by starvation or disease would likely kill them, or they were sent right to their deaths in the gas chambers. Again, in an evil deception, those sent straight to the gas chambers were told they were just going to take showers then would rejoin their families. This was mostly women, their babies, children under a certain age, people over a certain age and anyone who looked like they wouldn’t be able to endure the daily labor.

The victims lining up on the platform after leaving the cattle cars. 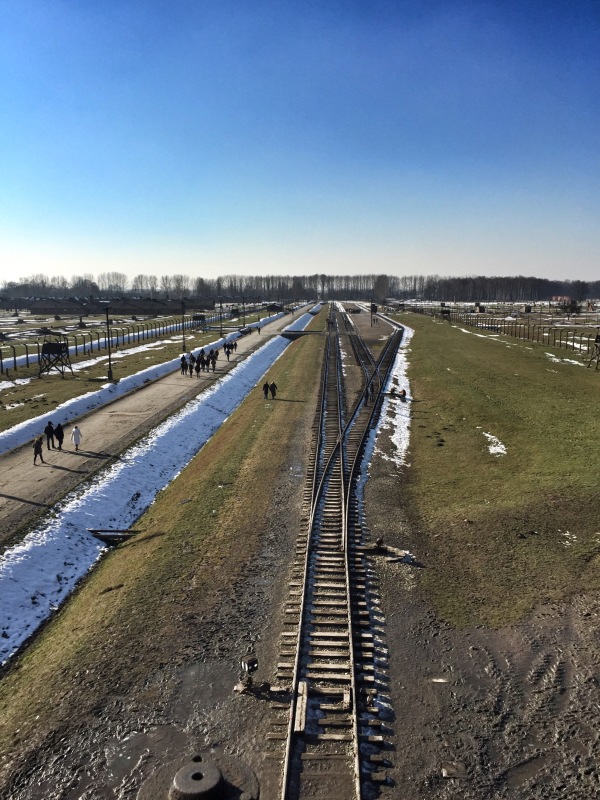 The view of the camp and the railroad tracks from the tower at the front of the camp. It was through this gate the trains would come daily.

One of the cars that would hold up to 80 people and their luggage. Most people didn’t survive the journey to the camps.

As the Soviet forces were closing in, the Nazis destroyed the gas chambers to hide the evidence than forced the prisoners on a death march. Only 7,000 were left behind. 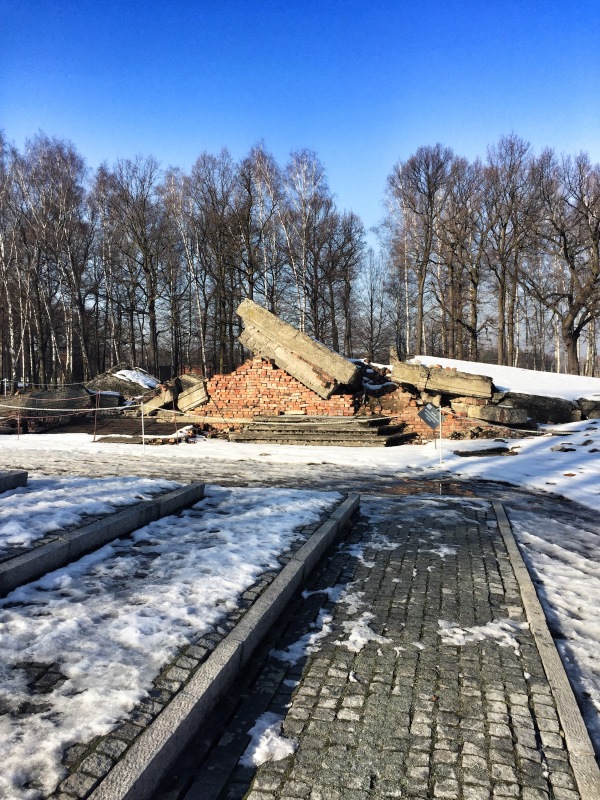 What is left of the gas chambers.

This pond is actually a final burial place for many people, whose ashes were just discarded. Or used as fertilizer. Or to build roads.

There is one of these plaques written in each language of the known victims – 27 total – and placed at the end of the railroad tracks.

I lasted the entire tour this time, because as I said before, this was less of the museum that Dachau was and more of a Memorial to the victims – the people, mainly Jewish men, women and children, who had done nothing to deserve such a terrible and horrible fate. It was not easy to face for three hours – but it was absolutely necessary.

One thought on “Aushwitz-Birkenau Holocaust Memorial”