Where: Brussels and Bruges, Belgium
When: October 2013
Hotel: Hotel La Madeleine (Brussels) and Hotel Karel De Stoute (Bruges)
Why Brussels and Bruges: Quite simply, one of my co-workers had bought some Belgium Peanut Butter and his daughters loved it so much that they told him don’t come back to the States without it. So, two weeks before he was due to fly home for a visit, a road trip plan was hatched. I’d never really thought about going anywhere in Belgium, so I was happy to go along if for no other reason that John was back in the States and it would give me something to do for my first weekend off without him around.

The Trip: This was honestly one of the first trips where I didn’t do a ton of research before we went – mainly because I was going with three other co-workers that I had never traveled with before and that honestly is a game changer. When I travel with John, I know that it’s basically up to me to figure out what to see and when, but when you travel with a bunch of people, it’s pretty honestly best to stay flexible. Not to mention, we had a serious shortage of time, fitting in Brussels and Bruges in to three days of travel that included about 6.5 hours of driving each way. 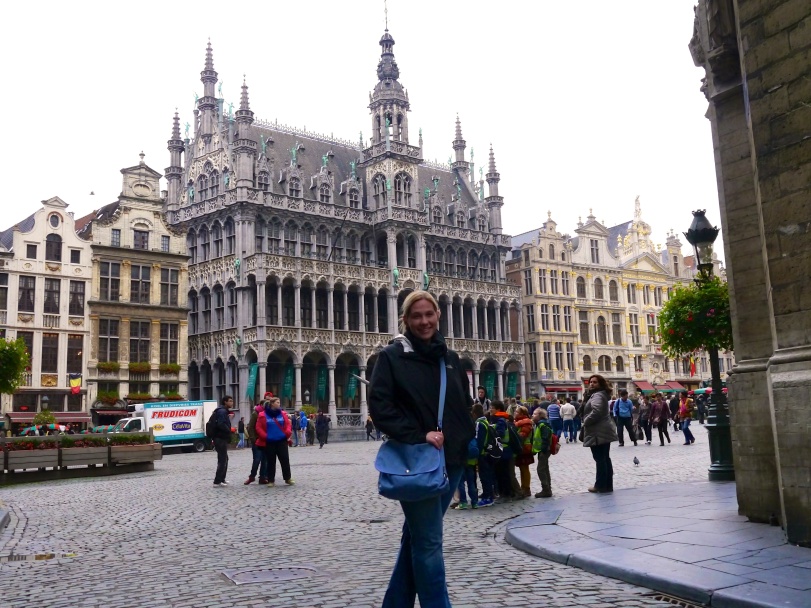 In front of the Grand Place…a UNESCO site in the middle of Brussels.

We stopped in Chimay before making our way to to Brussels to do a little beer testing. Let me say this now, I have never been one for beers that ventured away from the light-beer arenas but when you hear that Belgium has the best beer – those aren’t lies. Chimay Red might be one of the best beers I have had, as was Leffe Dunkel – one of the lightest dark beers I have had…and it was delicious! By the time we made it to Brussels, it was dark and we were hungry and thirsty. 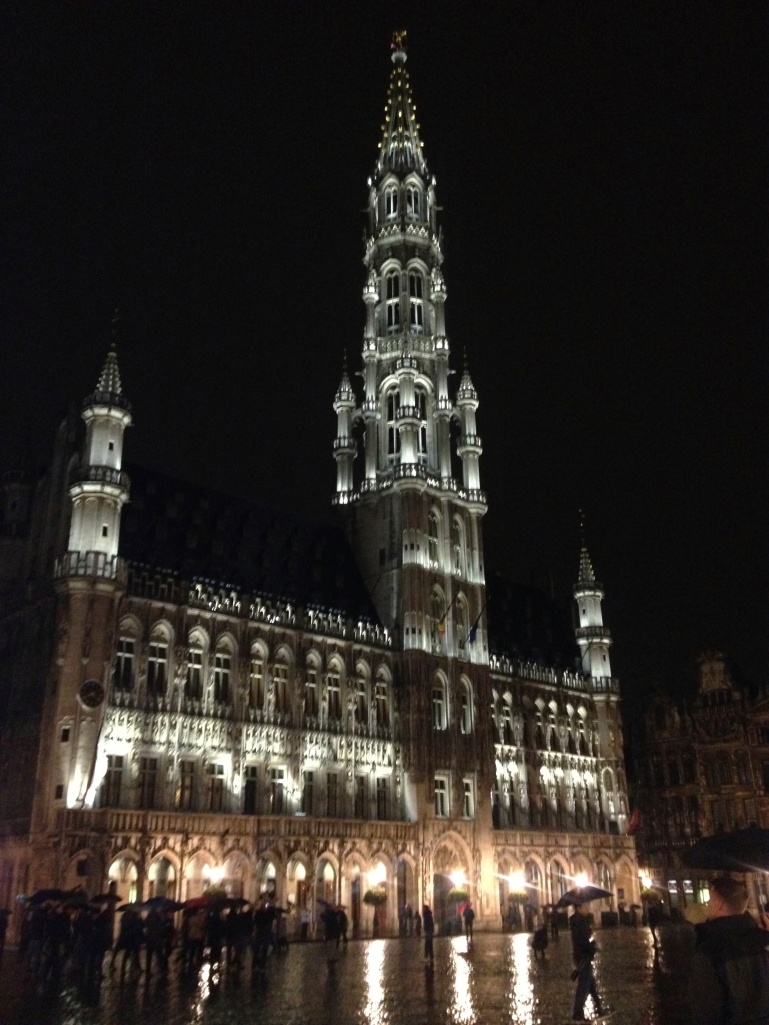 The Grand Place at night – so beautiful!

More of the buildings around the Grand Place

We found ourselves heading to the Ilot Sacre area, which has a crazy amount of restaurants and bars all kinds of intertwined. After dinner at a greek restaurant (I wish I had the name – it was delicious!), we worked our way to the Delirium Café, which boasts nearly 2,500 beers depending on the season. Crazy!

I found a Barbar beer at the Delirium!

The next morning, we decided to walk around a bit before hopping in the car and making the 45-minute drive to Bruges. The one thing I wanted to see what the Mannekin Pis statute, which was built by a father who had lost his son and said that he would build a statute of whatever his son was doing when he was found. The little 3-year-old was urinating – and that is just what this little statue is doing. It is much smaller than I expected and takes all of two minutes to see but it was cute nonetheless.

In front of Mannekin Pis

Next up was a Belgian Waffle – I can’t even tell you how yummy these are. I got one with Nutella and Strawberries and it was only around 3E…so, so good.

Belgium is also known for its fries – they are double fried and served with mayonnaise. Yes, heart attack city – which is why I am thankful that we split these between the four of us. 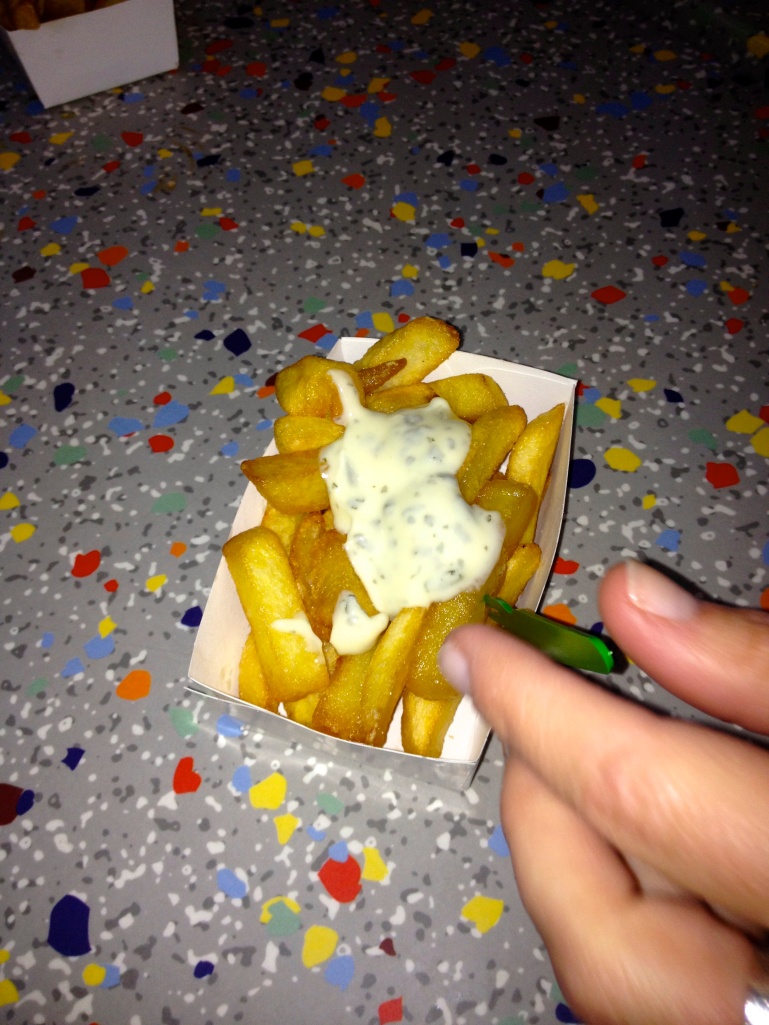 A pretty view of the one of the churches downtown. We didn’t have time to look in but I’d like to see it…maybe next time!

A quick stop at the hotel to grab our stuff and we were on our way to Bruges! This was just an add-on, which is a good thing because we didn’t get to a grocery store to buy the peanut butter in Brussels, so we had another shot in Bruges!

Bruges isn’t very large – only around 117,000 people live there but it is awesome. It has many canals running through it (recommended to take one of the boat tours – they aren’t too expensive or long and are really good to get a feel of the town), and is very easy to walk around. We just wandered the streets, which was really nice.

Loved these buildings and all the color!

The main square in Bruges

The old palace, now a museum

The architecture was amazing!

Loved all the canals!

We were there for a market, which made a great place to buy more Belgian cheese and chocolate!

It is the “Venice of the North” along with Amsterdam, of course 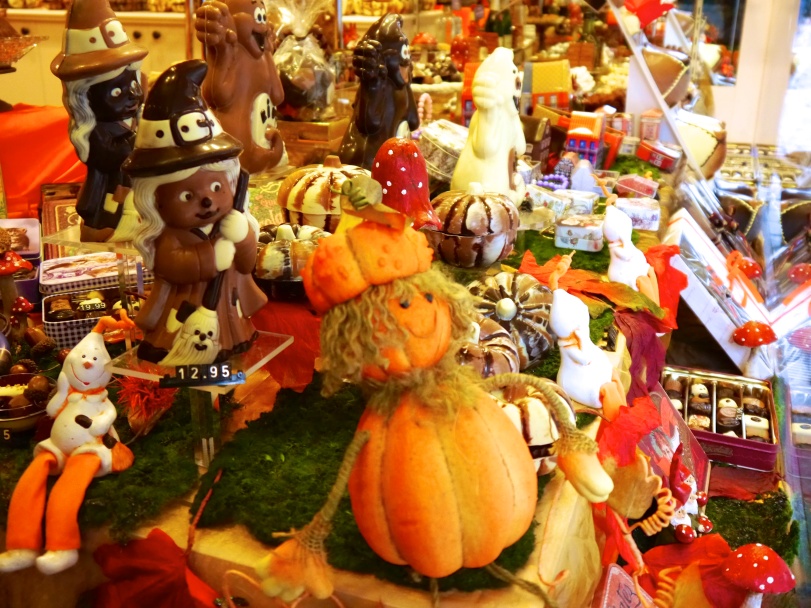 Don’t forget about the Belgium chocolate…all of the stores have the chocolate molded into adorable shapes!! (But buy the chocolate in a grocery store – way cheaper!)

Final Impressions: I don’t know what it is, but in the months since I have been there, I really, really want to go back. I absolutely LOVED Belgium. It was fun – and the beer, chocolate, cheese did not disappoint! Plus, this is one of the places where I really, really wanted John to be with me to experience once I was there and got to see how amazing it was. Stay tuned for a return trip in 2014!

One thought on “Throwback Thursday: Brussels and Bruges, Belgium”