Where: French Road Trip – Stop #3 Normandy Beaches
When: September 2017
Hotel: We spent the night at Disney Paris (Vienna House Magic Circus Hotel Paris)
Why Normandy: The Normandy Beaches should be on any history lover’s itinerary, and as someone with a minor in history, I knew I had to visit before our time in Europe was over. It is an absolute feat what was accomplished on D-Day, and to stand on the beaches and look around and then visit some of the more historic sites, just leaves you a little speechless. The planning and manpower alone is simply amazing. I don’t even know that I truly grasped what was involved until we were there.

The Trip: I love traveling with Karyn because she is up for anything, like myself, and so when I suggested the itinerary for our time in Normandy, she didn’t even blink. We only had a limited amount of time, because we planned to visit on the Friday before the races, so we had half a day to visit Normandy, drive back to Paris, return the rental, hop a train to Disneyland Paris, check in to the hotel, stash our bags, get back on bus back to the park and get to the race expo before it closed. Whew. 🙂

Even if you don’t have a time crunch, I highly suggest booking a tour in Normandy. I didn’t even realize just how spread out the different beaches/landings were and it would be easy to miss so much. I booked us a half-day tour with Overlord Tours (#1 on TripAdvisor – and I highly recommend!) It was a small group – just Karyn, myself and four others, which I always like better than large groups! We lucked out in that the tour started right behind our hotel, which made it super easy to link up with everyone. The tour started at 8:30 am and was completed by 2 pm.

Our first stop was Longues sur Mer, a German artillery battery that was taken by the British. It sits on a 200 ft cliff, and is the only one in Normandy that has all of the original guns. It’s only 5 miles from Bayeux and an easy starting point.

Longues sur Mer and the English Channel in the background 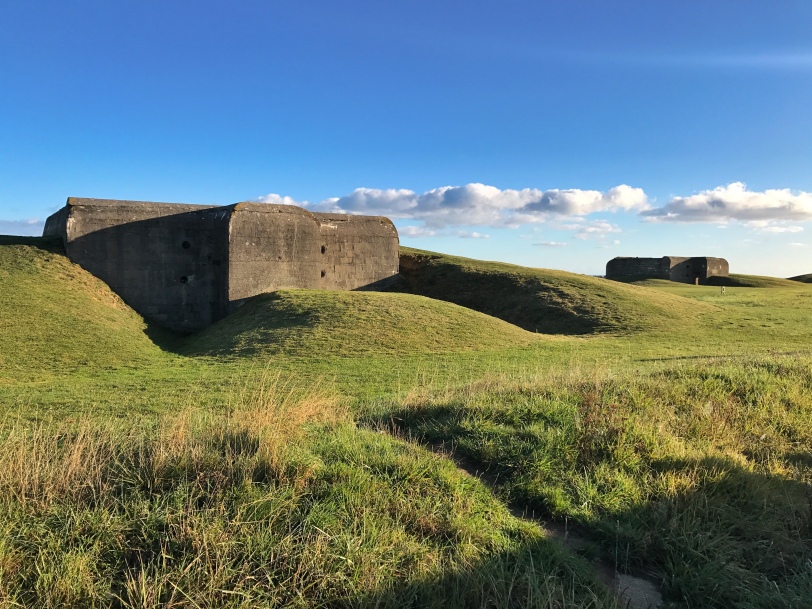 The back of the German batteries 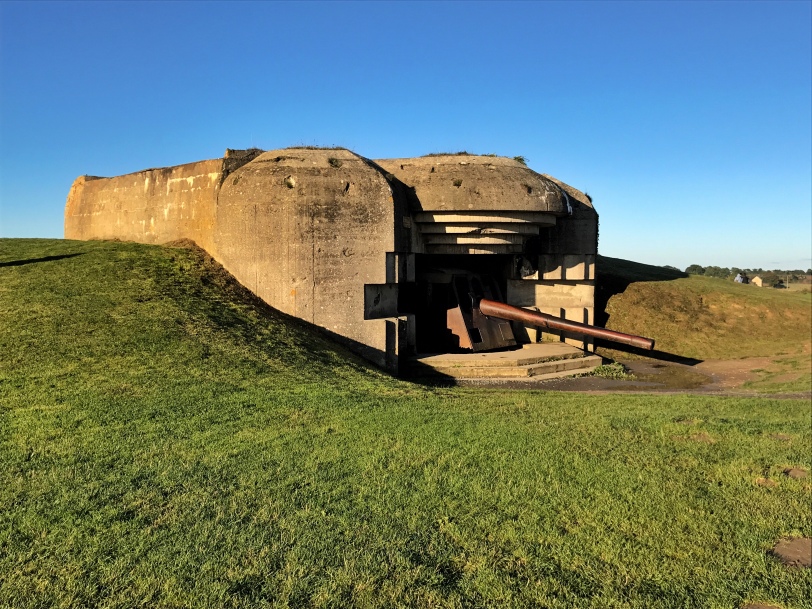 The front of the batteries

From there, we drove to Omaha Beach, about 18 miles from Longues Sur Mer. It’s so crazy when you walk down to the beach from the parking lot how pretty and peaceful the beach is, especially considering its bloody history. As it was September, the beach was pretty much empty and this is where a tour comes in handy. She pointed out the spots in the dunes where the Germans set up their guns, now long grown over by grass. What’s even more crazy is that in the summer, people come here to swim and relax, which makes me even more happy it was empty for us. It would have been hard to imagine the battle that took place with people playing in the waves and sunning themselves.

The mission at Omaha was to secure 5 miles of beach to link the British troops at Longues Sur Mer to Utah, and it was up to the US Army to take the beach. However, the day didn’t go as planned and there were heavy US casualties. Somehow, the survivors managed to make progress with unplanned assaults and scaled the cliffs where there were breaks in artillery. To say it was a heroic feat is an understatement. It took two days to make progress, but eventually the D-Day objectives were achieved.

Karyn and me on the beach – crazy how pretty and calm it is!

Hidden in these dunes are the German artillery platforms

Sitting directly above the beach is the Normandy American Cemetery, arguably the most emotional stop of the day. It was hard not to tear up when the American National Anthem started playing as we stood next to the rows of white crosses. (I was unsuccessful – there definitely were tears). Pride and patriotism are two of the strongest emotions you will experience in the cemetery. Simply amazing what was achieved – true heroism.

Walking into the cemetery 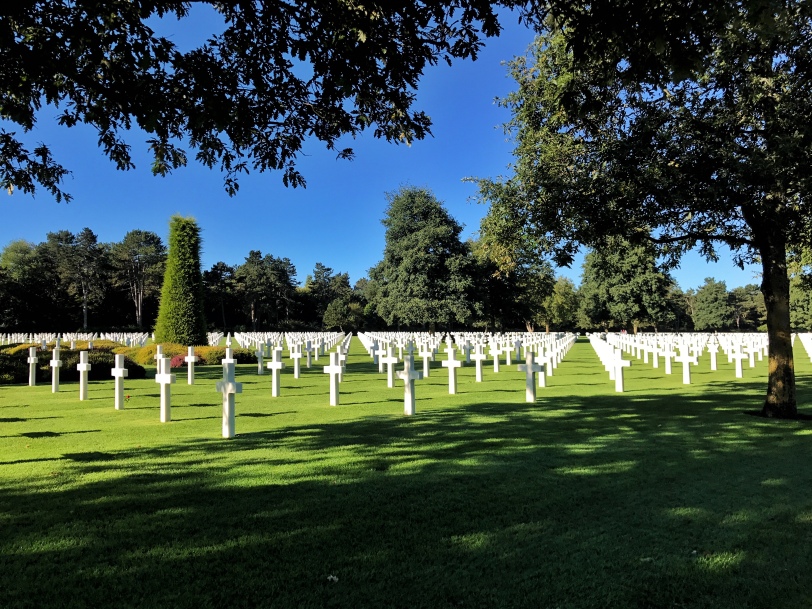 The cemetery covers 172.5 acres and contains the graves of more than 9,380 WWII fighters 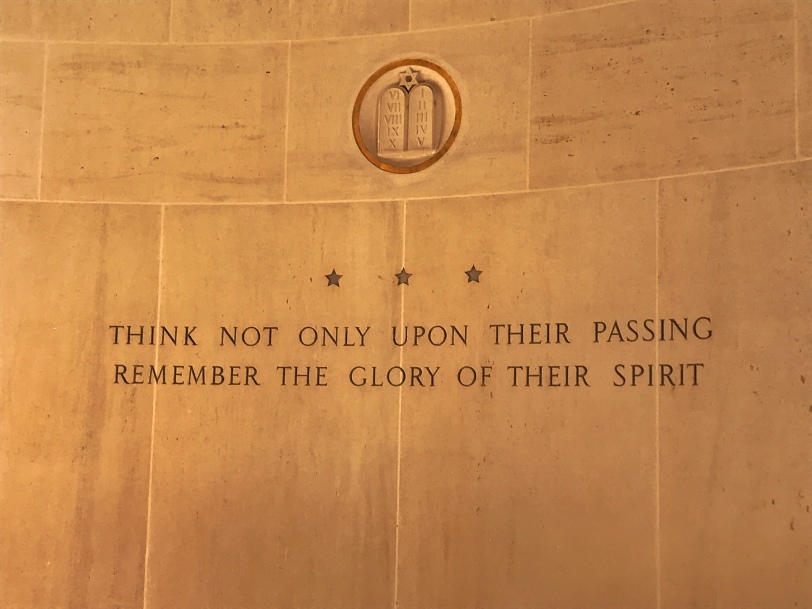 The inscription in the chapel

Omaha Beach is below 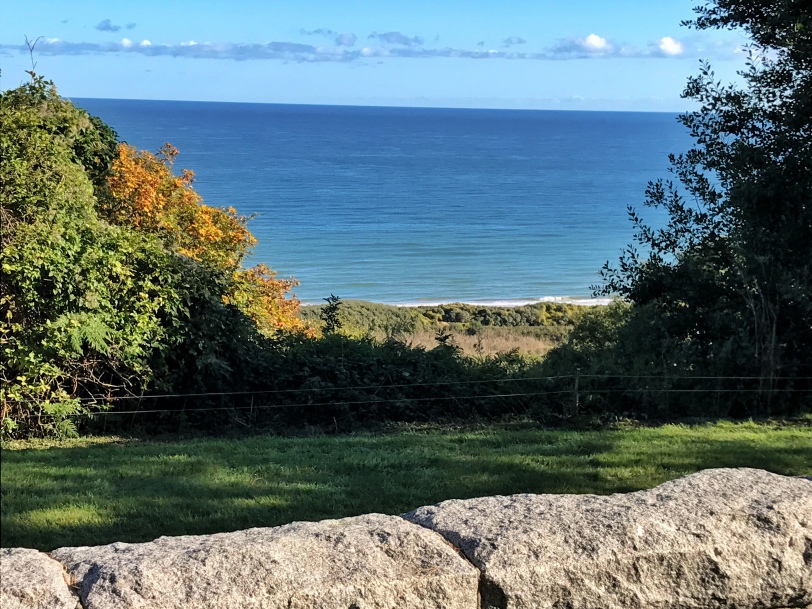 Outline of the D-Day landings 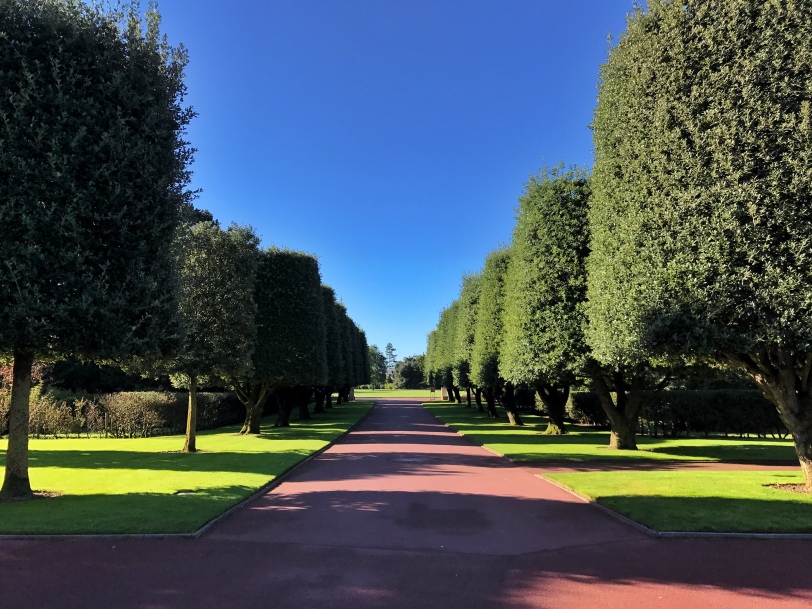 Walking out of the cemetery 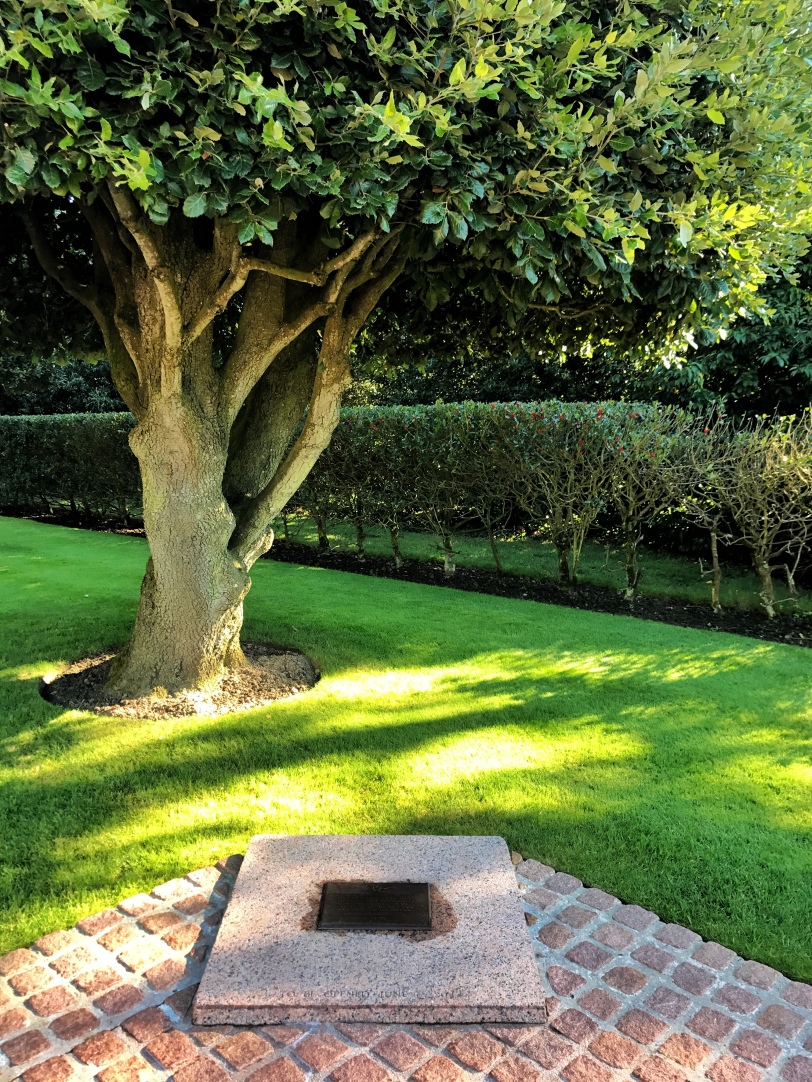 A time capsule dedicated to Gen Eisenhower containing news clippings from 1944, and not to be opened until 2044.

Our final stop of the day was Pointe du Hoc, a 100-foot cliff overlooking the English Channel. During D-Day, the US Army Rangers were responsible for capturing Pointe du Hoc. To do this, they had to scale the 100-foot cliffs. One ranger was able to achieve this in 5 minutes. Crazy.

Looking out from Pointe du Hoc

The craters were from Allied bombings

One of the German lookouts 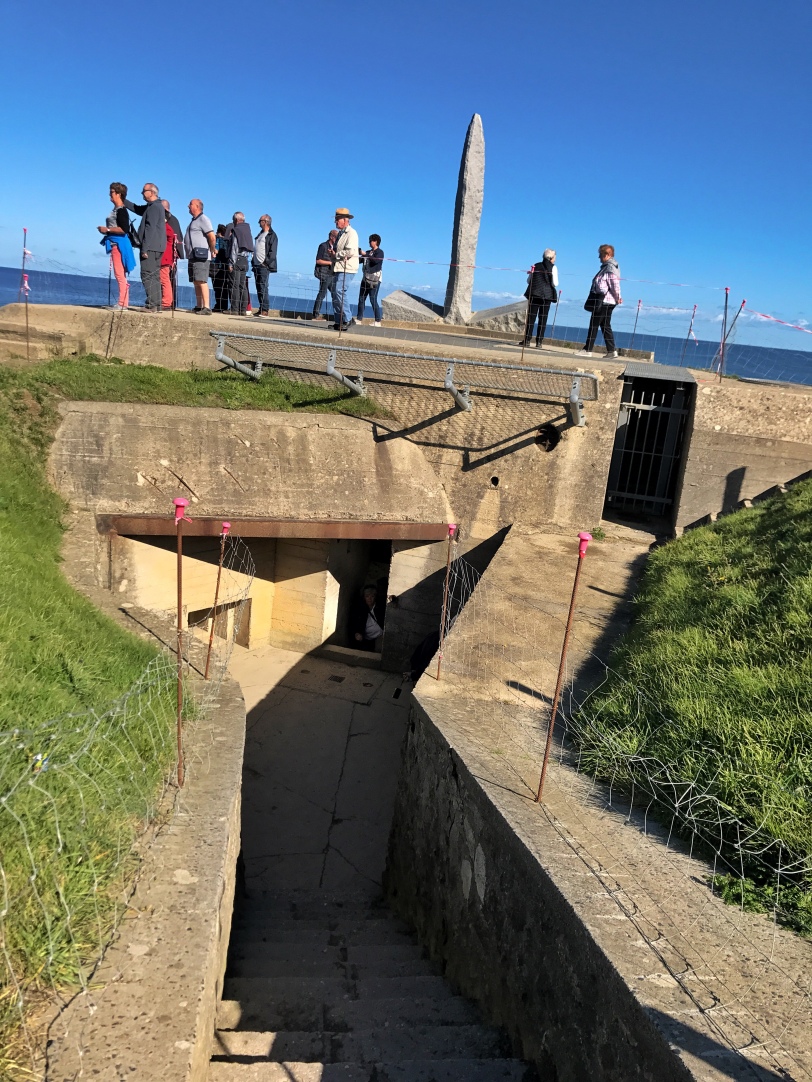 Entry down in to one of the lookouts 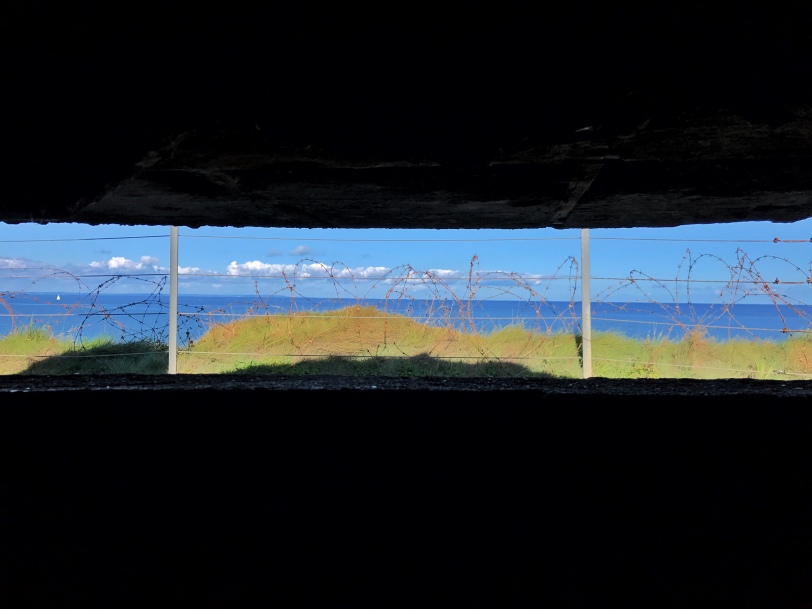 Looking out from inside the bunker

Looking down the cliffs to the water

Ranger casualties – insane that they were still able to achieve the D-Day objectives!

That was the end of the tour, and 30 minutes later, we were back in Bayeux and heading to Paris.

Back in Paris and about to drive around the Arc di Triomphe EIGHT lane traffic circle.

Final Impressions: We saw and learned so much in just a half day tour, and as we headed back to Paris, I felt completely happy with how the morning went. There is so much to see in Normandy that it would take days if you wanted to see it all, but if you only have half a day, the tour hits all the highlights. Normandy is a must-see. It will be a somber day, but also one that will fill you with equal parts pride and amazement at what was accomplished.