Where: French Road Trip – Stop #2 Mont St. Michel
When: September 2017
Hotel: Churchill Hotel (Bayeux)
Why Mont St. Michel: I’ll be honest, before moving to Europe, I had never even heard of Mont St. Michel. But the more I looked up places to add to our Europe “Must-Sees” list, the more it kept popping up in the pictures. Mont St. Michel is 3 hours southwest of Paris and about 90 minutes south of one of the main towns in Normandy, so it was an easy addition to our road trip itinerary! 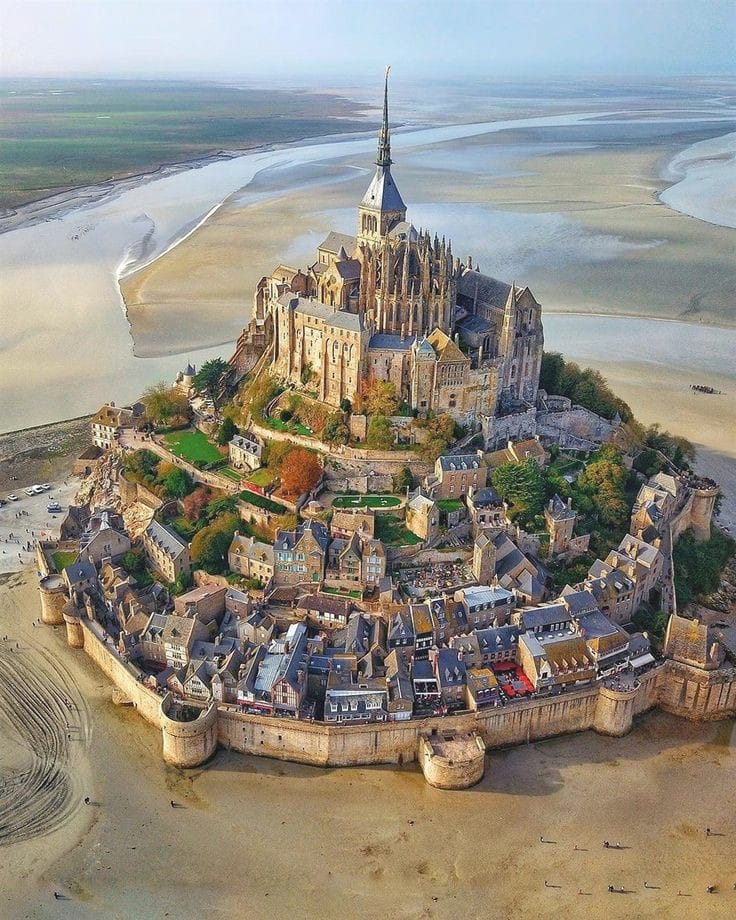 This is clearly not my photo but gives an amazing aerial shot of the island…when the tide is out!

The Trip: We rented a car in Paris for the 3-hour drive to Mont St. Michel. There are train and bus options but driving from Paris is a bit easier. Plus, the drive down is rather unexciting so you won’t miss much as the driver. We got up early to (hopefully) beat some of the morning traffic, but we weren’t that lucky so getting out of Paris took longer than expected. However, it was super easy once we were out of the city. The coolest part about driving to Mont St. Michel is the occasional glances you get of the island. It is crazy how viewable it is from so far out. 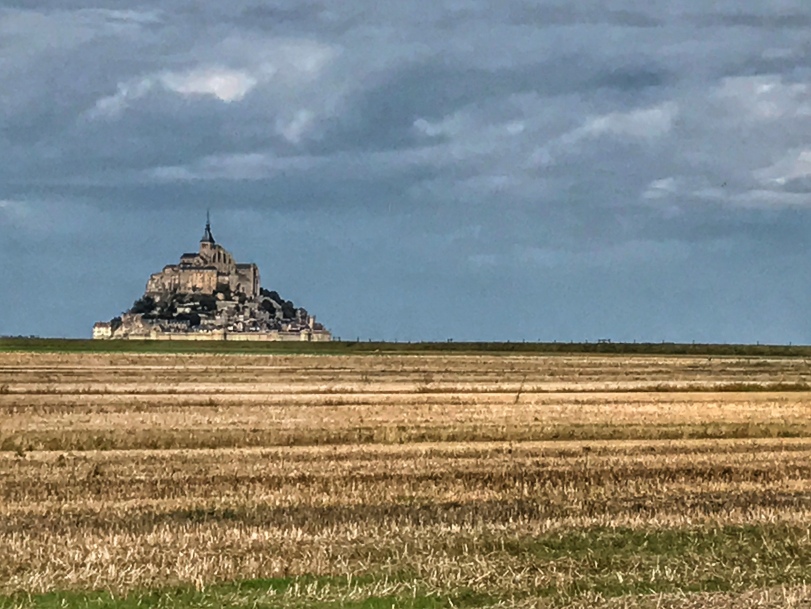 There isn’t a lot in the immediate vicinity, so the views of the Abbey while driving up are spectacular!

Once you get there, there is a large parking lot and then you can take a shuttle bus the rest of the way. You can also walk the 1.5 miles to the island, but the shuttle stops about .25 miles from the island, so you still get the best part of walking up to the island itself. One good thing to know – if you plan on visiting the Abbey itself, make sure to buy tickets in advance (as for anything, of course!) You don’t need tickets to get on the island itself, but you will for the church at the top, which is definitely worth a visit.

Also before you go, decide if you want to stay on the island or off. Literally every single blog I read (you know I trust blogs more than guide books – they haven’t been wrong yet!) recommended staying off island in one of the cute French towns nearby because hotels on the island are expensive (for Europe) and small (which, rooms in Europe can already be small, so these are minuscule!). A quick search of my own on booking.com confirmed that the rooms cost much more than they were worth. However, if you’re going to have FOMO, stay on the island. But the best views are OF the island, not ON the island, so that may factor in to your decision. (Not to mention, none of the restaurants I read about were worth the money, either. We stayed for a few hours and I feel we got the same experience we would have if we stayed overnight). 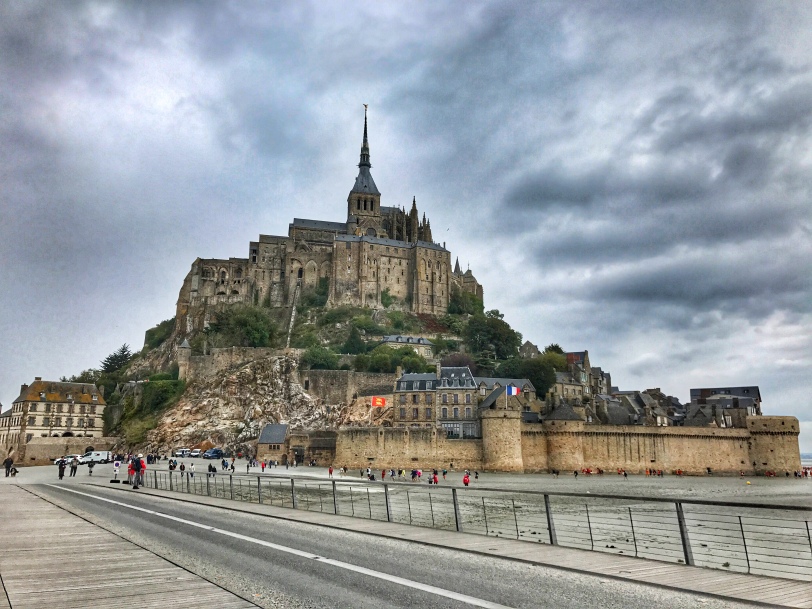 Absolutely stunning – plan on spending some time here – where the shuttle bus drops you off – because these are the pictures you’ll get!

That is the Abbey itself and you can see it’s built right into the rock!

The entry into the village

Because it was off season, again, the crowds weren’t terrible. Thankfully, because there is one main “road” to the Abbey and in the high season, I expect it would be suffocating. It still got tight in spots, but by the time we got up to the Alley, the crowds seemed to disappear. Even in some of the side alleys, the people were minimal. 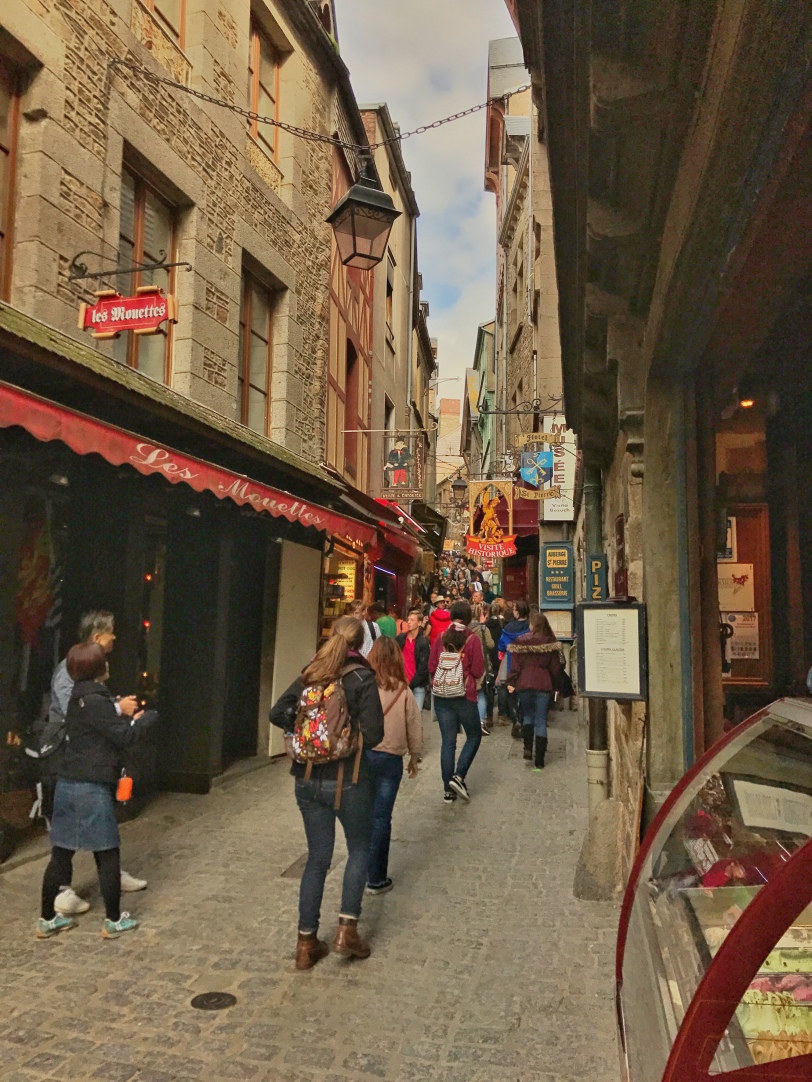 The narrowest spot and maybe the most crowds we experienced all day.

This is a good stopping point for pictures…and to take a break from the stairs.

The Abbey – and the stairs leading up to the entrance outlined along the side.

Looking out to where there would normally be water. The little dots are people on a tour.

We’ve lost all the people and made it to the Abbey!

Looking back at the stairs we just walked up!

Looking at the church 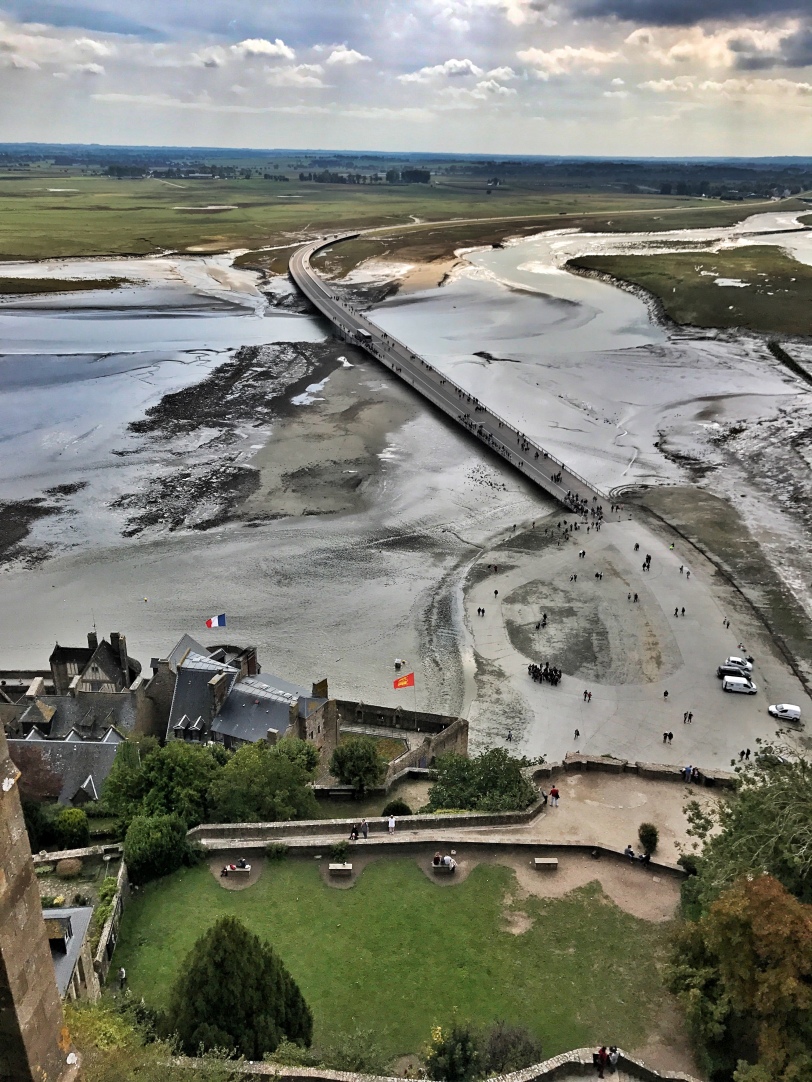 If you look in the middle of the bridge, you’ll see the bus at the stop. We started all the way down there! 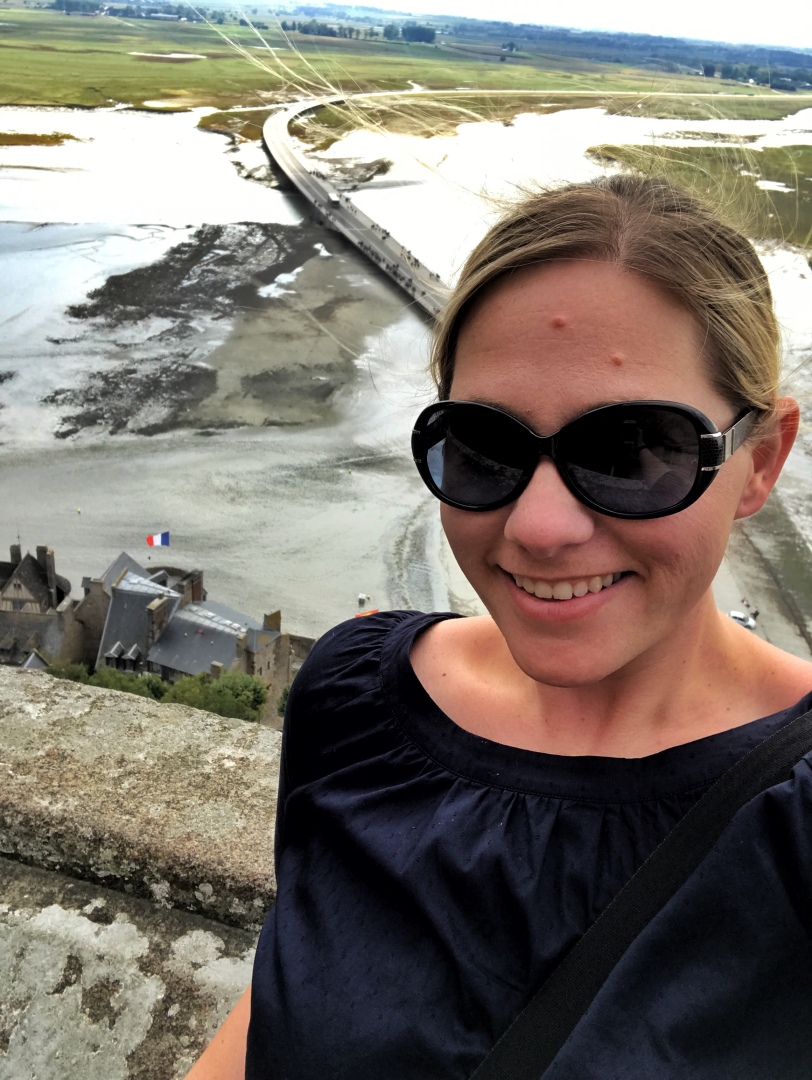 Super happy we made it! And that we have a break from the stairs! 🙂

The island dates back to the 8th Century and was seized by the Vikings, taken over by the Benedictine Monks and attempted to be captured by England, who failed. In the 17th century until 1863, it was a prison before it became a historic monument in 1874 and recognized by UNESCO in 1979. That’s an incredibly brief history lesson on a very fascinating past, so definitely take some time to learn more about it before you go. If you want to walk around the island when the tide is out, you’ll have to book a tour. Walking through mud didn’t interest us, even though we were able to walk around some of the edges. It was a muddy mess! Very pretty, but I imagine even more gorgeous when the tide is in and the water surrounds the island.

The itinerary is easy for the island – wander the charming streets and visit the Abbey itself, which sits at the highest point of the island. There are a LOT of stairs, which is what I thought maybe scared some folks away, but they are worth it. Again, we got there in the afternoon and were among very few people inside the abbey itself.

It’s not hard to find the Abbey. You’ll enter the village and follow the Grand Rue to the top (it’s like Diagon Alley for all you Harry Potter fans out there!) The church itself was added after the Hundred Years War. None of the areas are particularly grandiose or opulent but pretty in their own right. The main courtyard area was under construction while we were there, so we didn’t see that. But I found the Cloister and the Knight’s Hall two of my favorite rooms. I also liked the wheel in the Prison area used to bring up supplies.

We’ve had a lot of adventures! 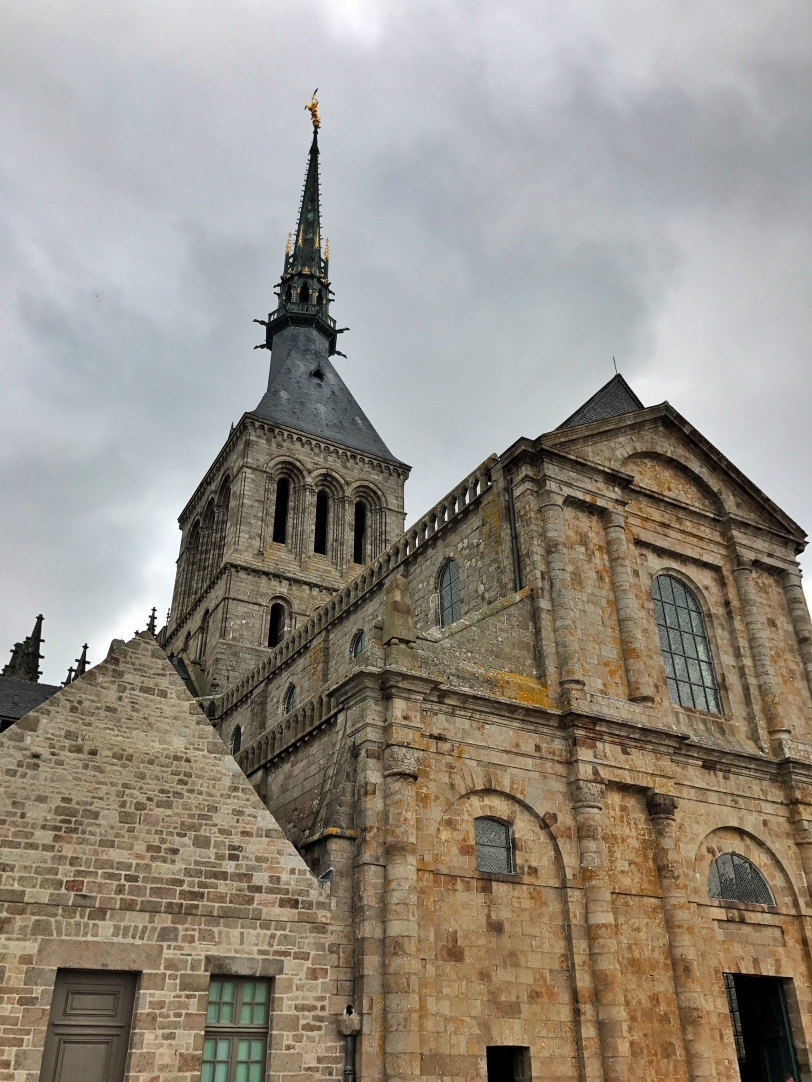 The Front of the Abbey 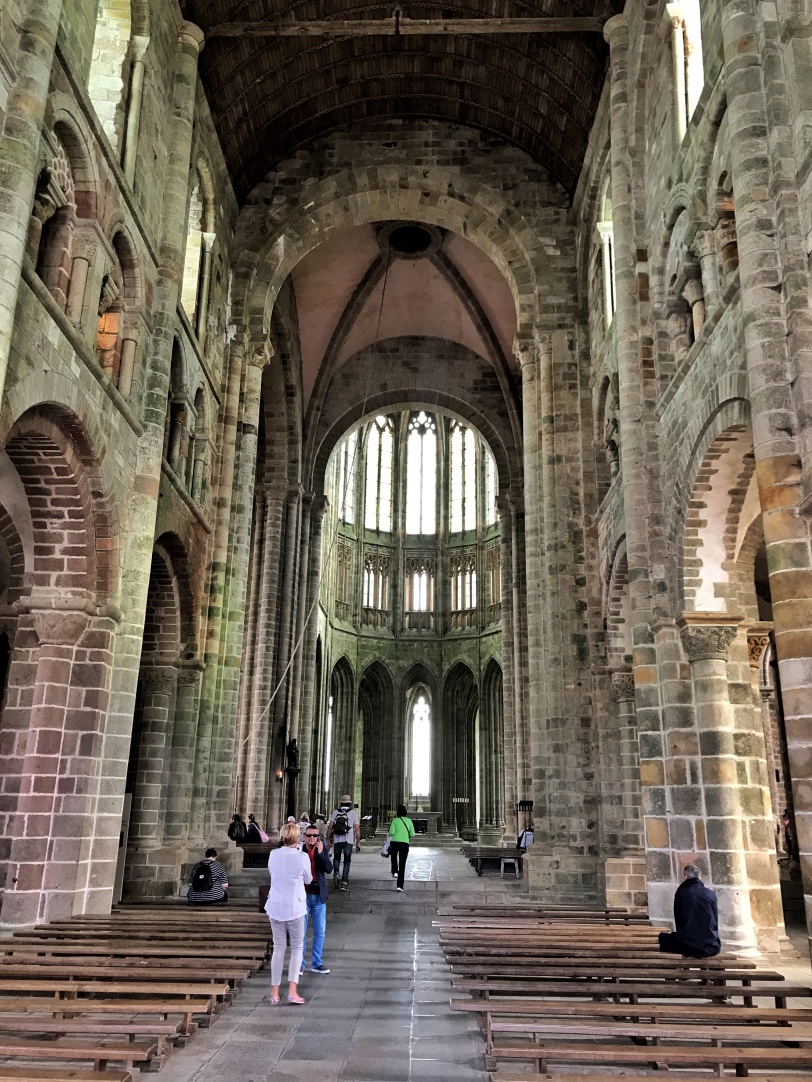 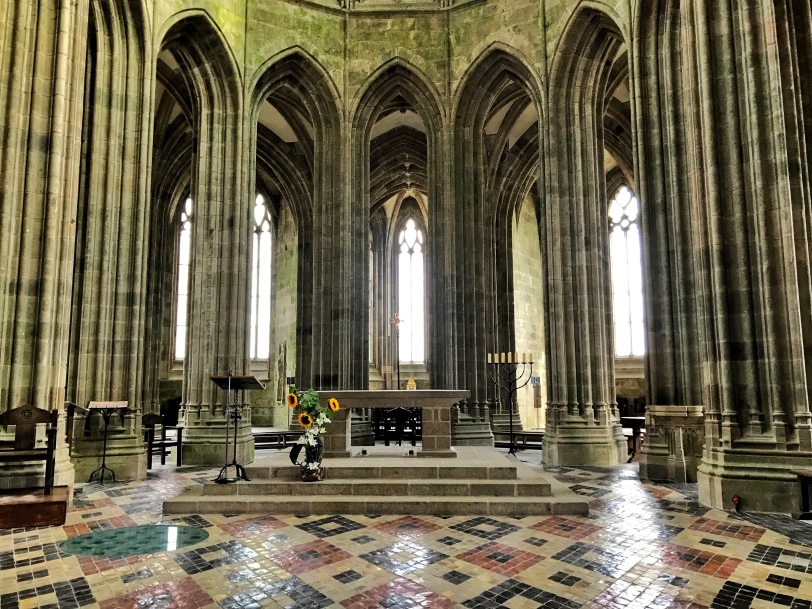 So simple, but pretty – I liked the sunflowers 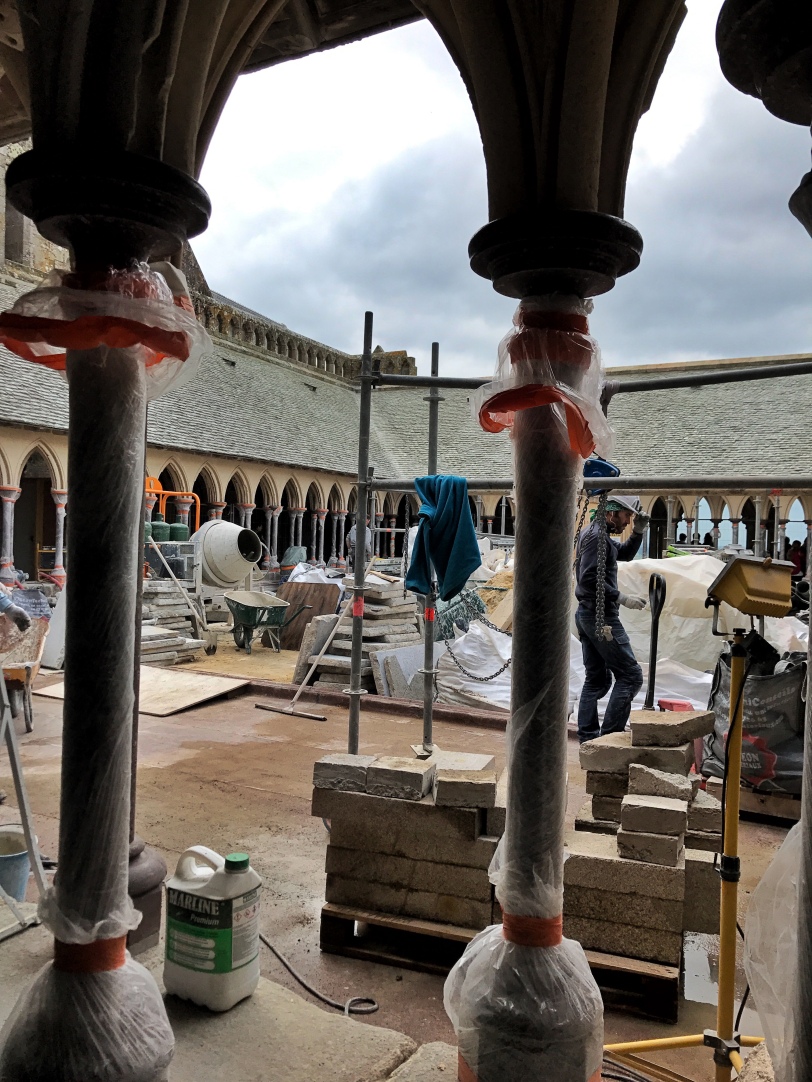 We were trying to figure out how they got the supplies in, and Karyn totally called it – they use helicopters! 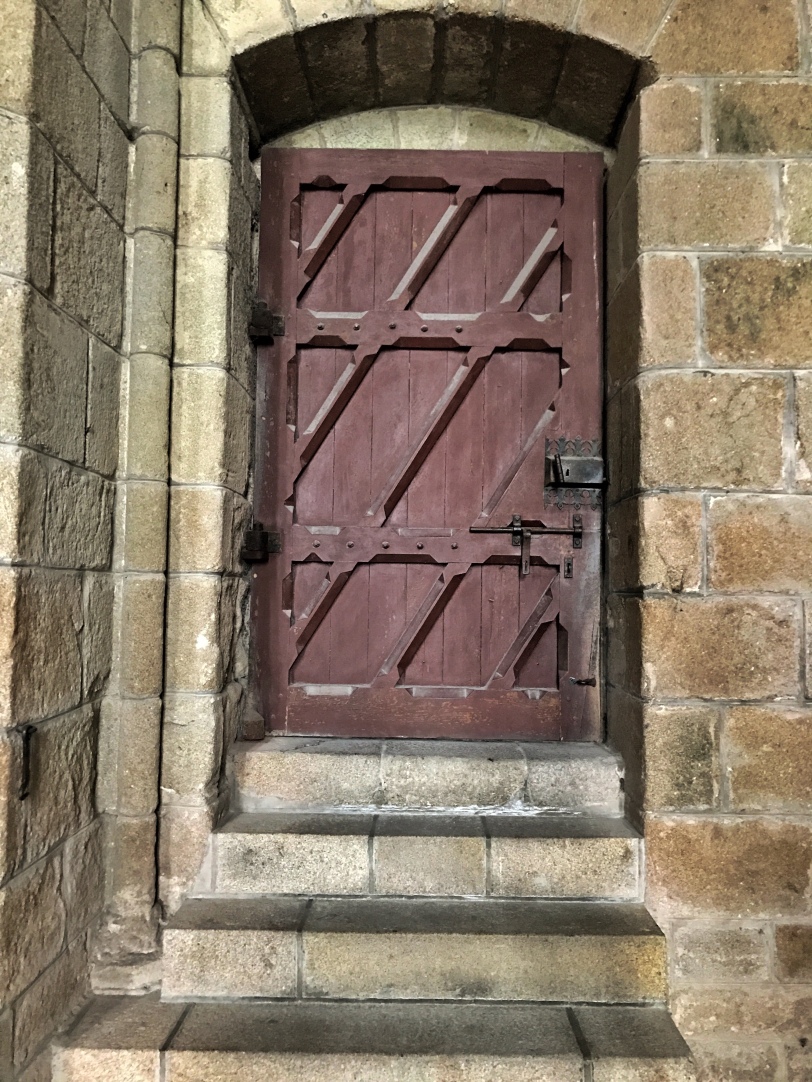 I loved the doors

The giant pulley system used to bring up supplies 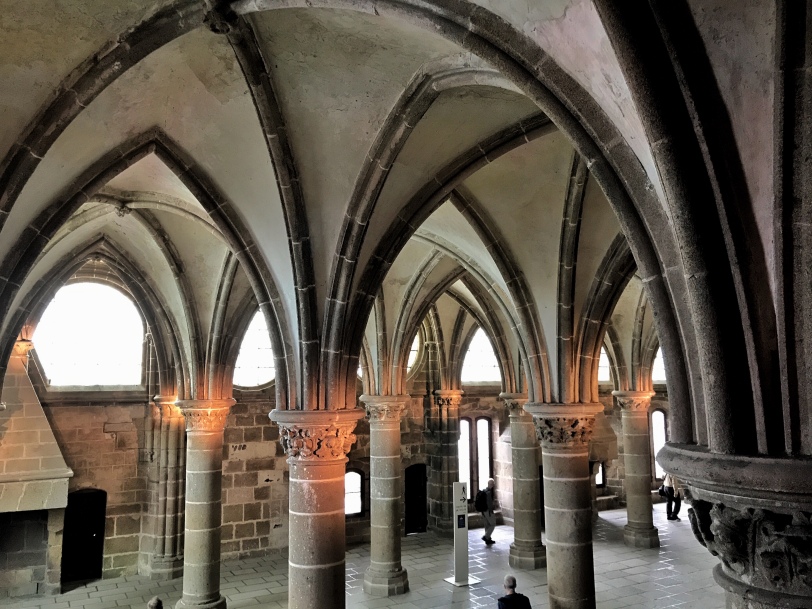 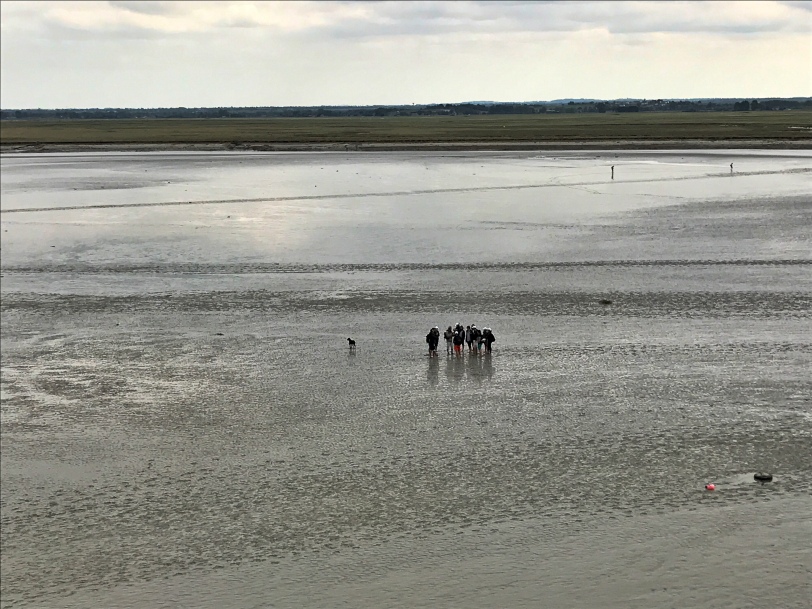 A little class trip to where water should be! 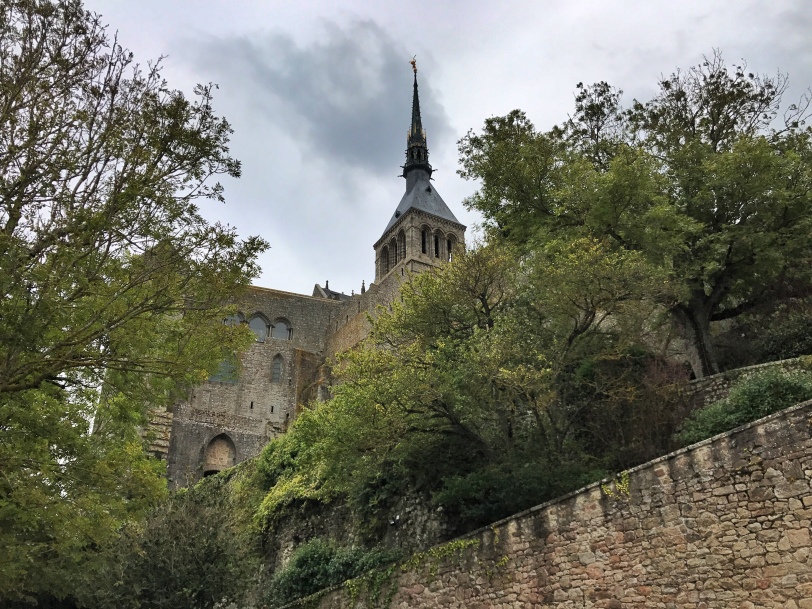 The walk down takes you on the opposite of the island, and it’s a really pretty walk! 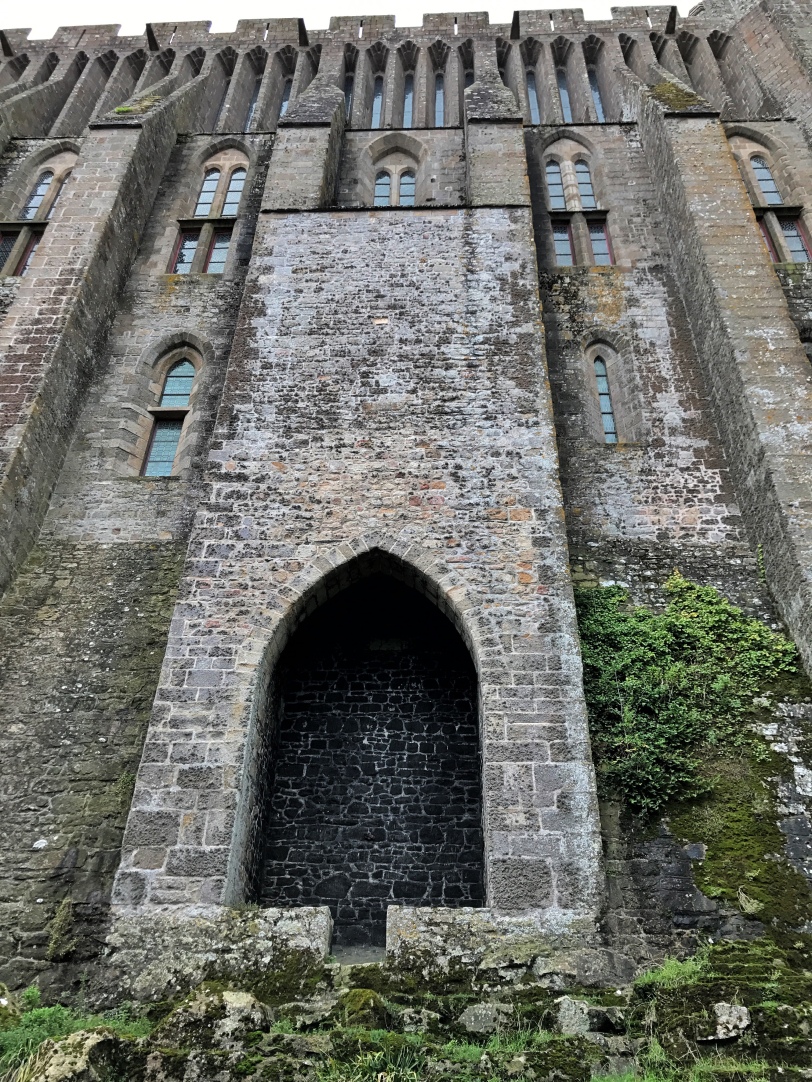 The sides of the Abbey 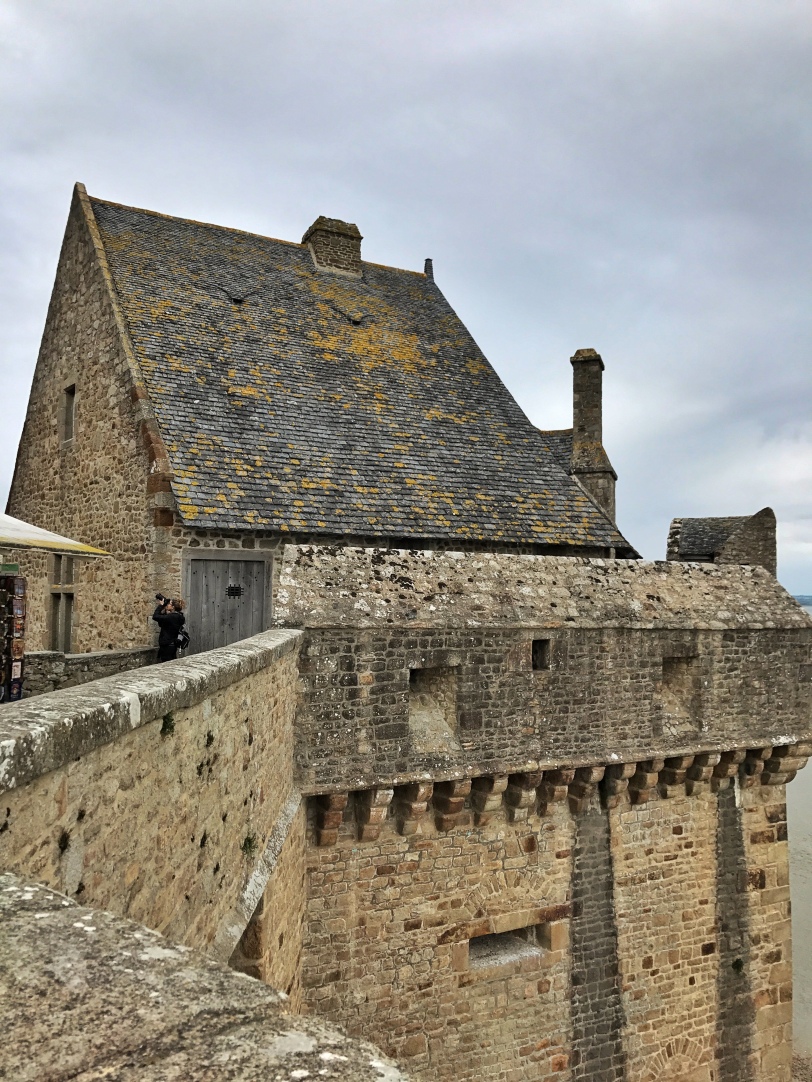 Less than 50 people still live on the island – these homes are so charming! 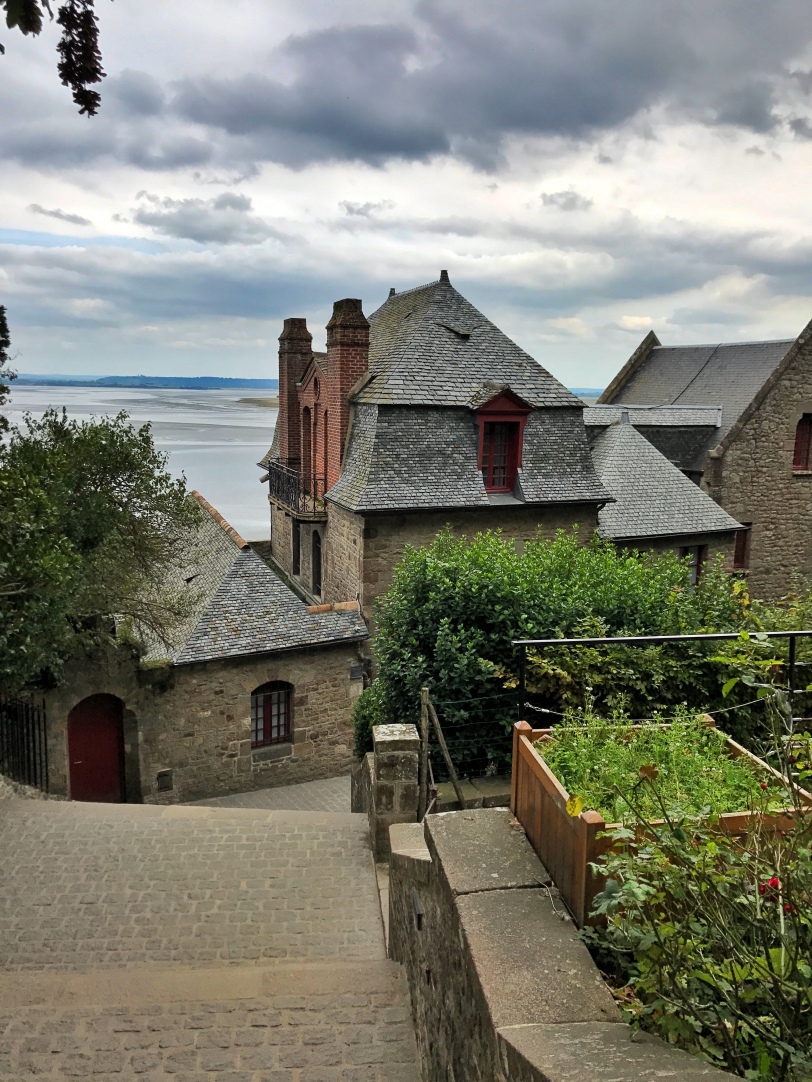 More of the charming homes!

We walked straight to the Abbey when we arrived then took our time walking down. The souvenir shops are super touristy and the restaurants, again, super pricey (one blog I read written by someone who lives in France said the island had the worst food in the country…yikes!) Still, I picked up some biscuits (cookies) from the La Mere Poulard shop and a bottle of wine, which I bought more for the bottle itself and don’t plan on opening.

After the Abbey, and wandering, and shopping, we spent some time outside the village, walking along what would be the sea wall. There were definitely places that the mud was worse that other areas, but it was fun to walk around and also to admire the Abbey from that view points. 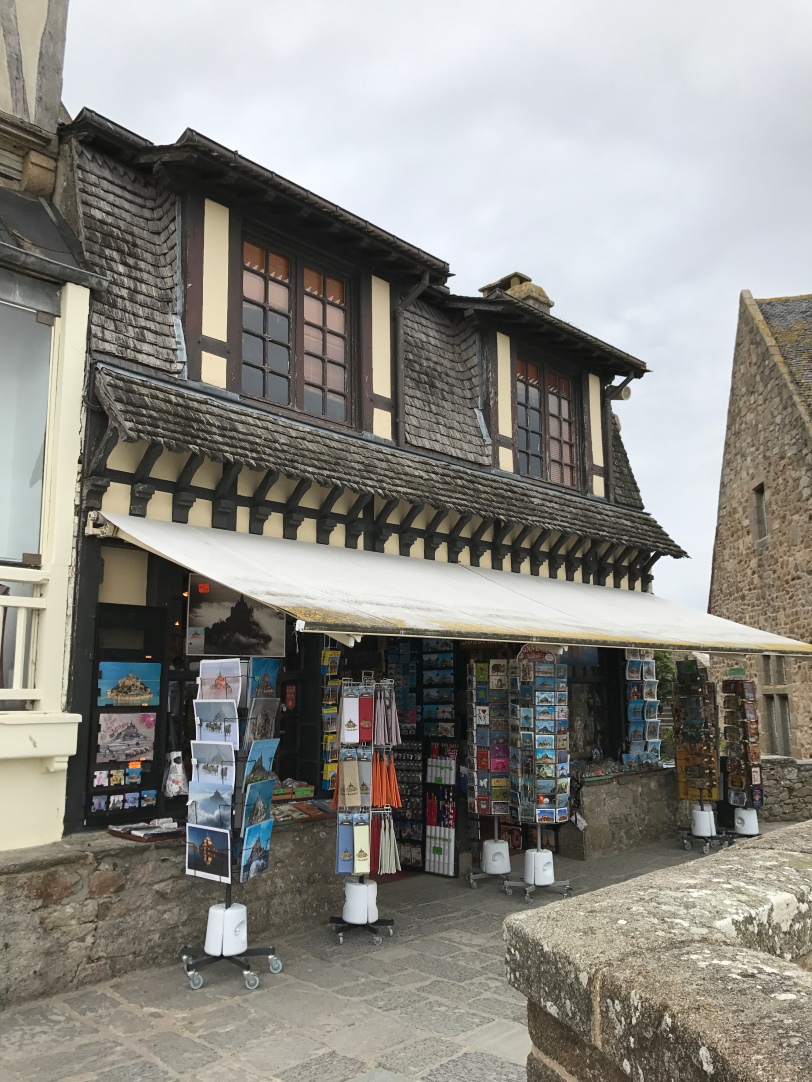 One of the cute little souvenir shops!

We made it back to the Grand Rue! 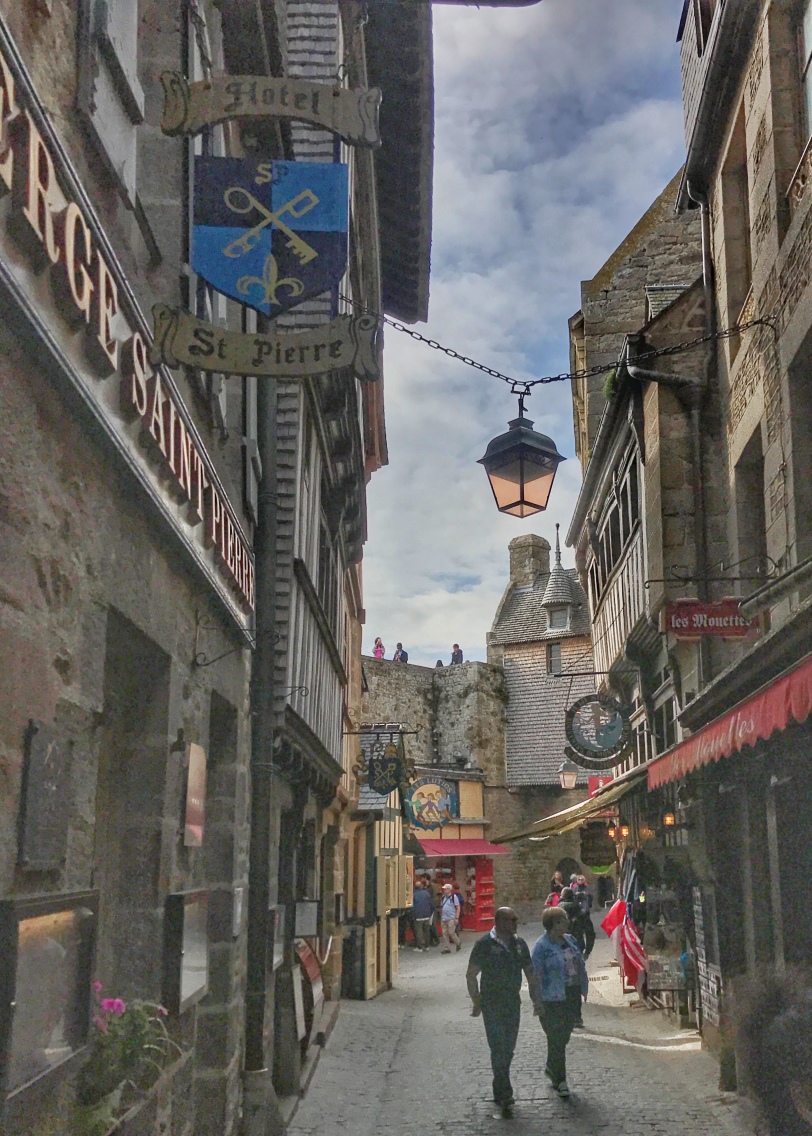 The crowds really thin out in the late afternoon!

Walking in the tidal area and getting another view of the Abbey!

One more glance at the island before it was completely covered in fog. After the fog rolled in, you couldn’t see the island at all – we had perfect timing!

We headed to Bayeux for the night, which is the first major town the Allies took during Operation Overlord, or D-Day. To say that this town is a fan of Americans is an understatement. Even after 75 years, the town has shops and storefronts dedicated to thanking the Allies for freeing them from Nazi occupation. I highly recommend spending time in this town – it is warm and welcoming! We found a little place for dinner (Bayeux itself is a quiet town and we had to search for a restaurant), before tucking in to rest up for our Normandy Beach tour the next day! 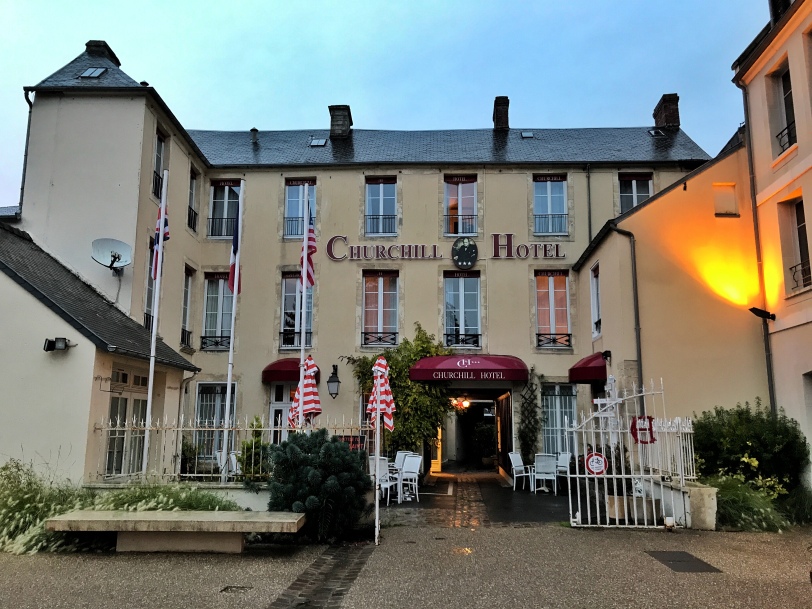 Our cute little hotel! It was in the perfect position for our tour of Normandy! 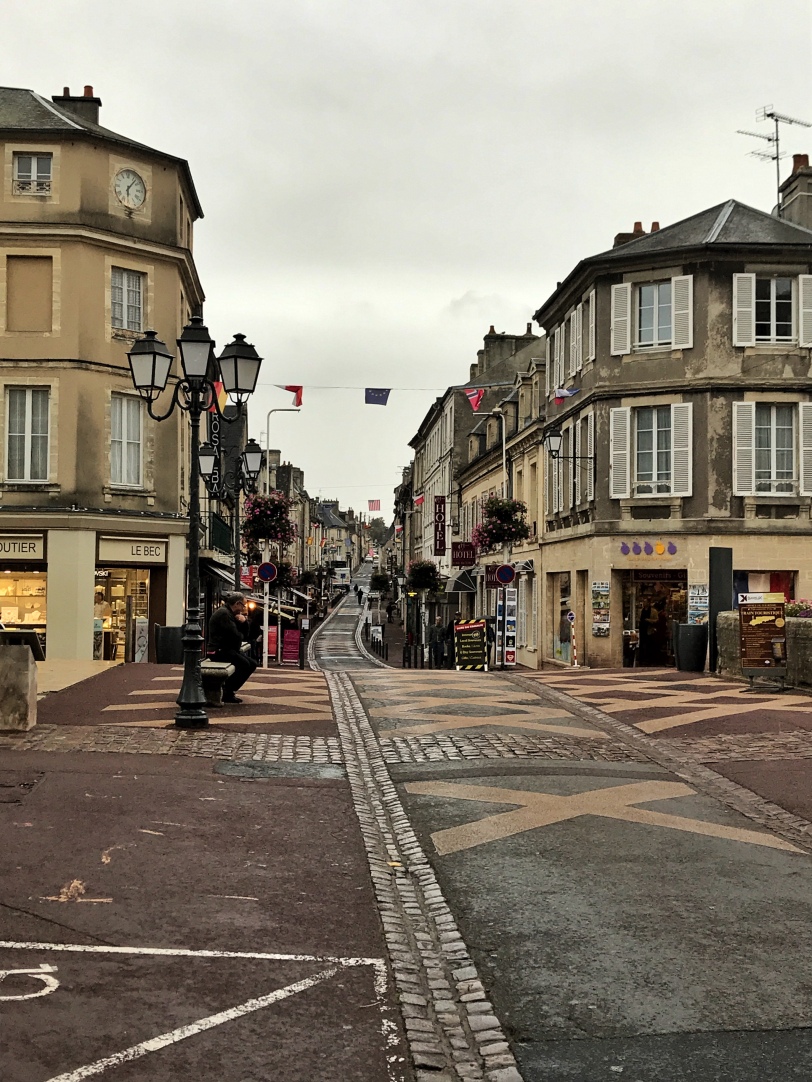 The bonus is Belgian beer is readily available in France! 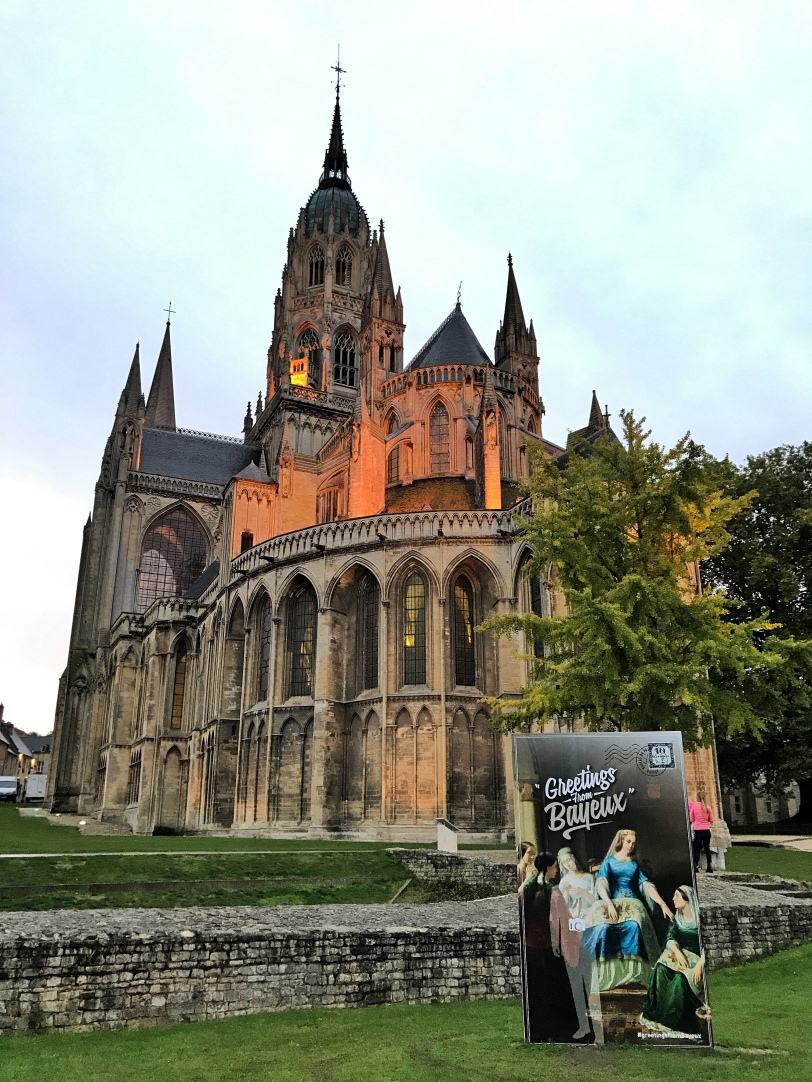 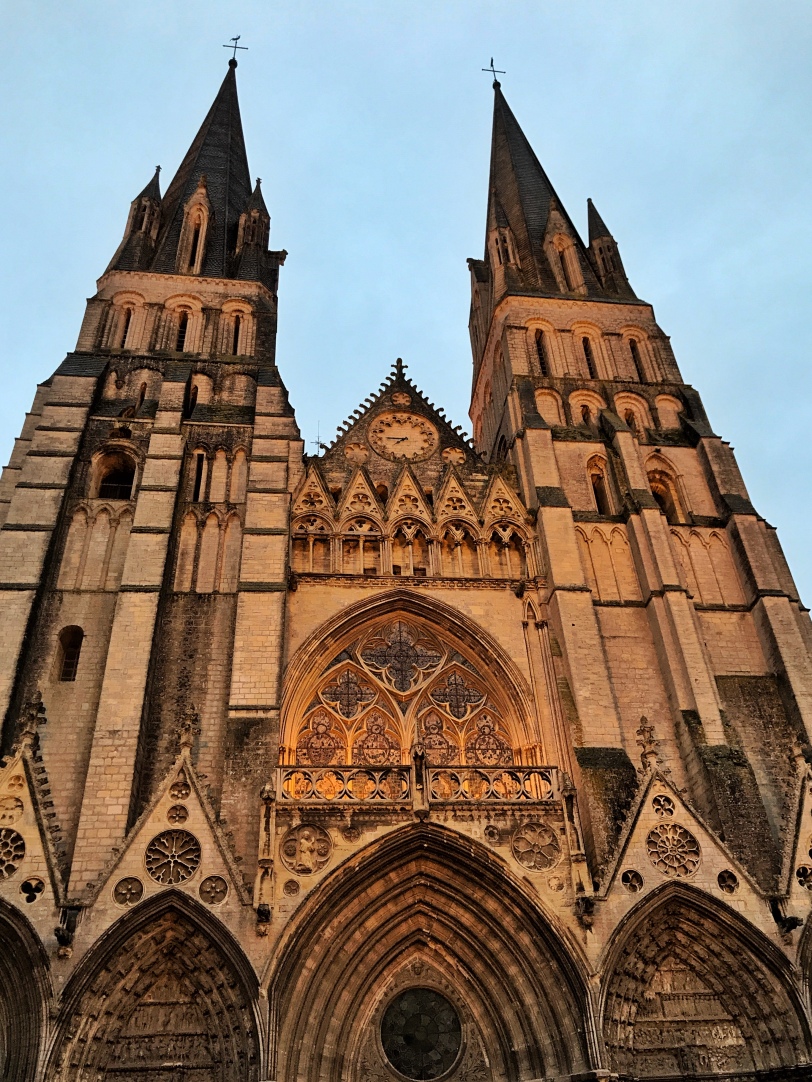 The front of the Cathedral

Walking back to our hotel.

Final Impressions: When going to France, don’t miss this place if possible. I honestly would have been content just admiring it from the outside because it is that fantastic. The island itself is a marvel, and while the shops are kitschy, the star is the Abbey, which is worth the additional money itself. It is an easy trip from Normandy, and there are plenty of tour options if you don’t want to go at it alone. This was a wonderful day!