Why the Dead Sea: My dear friend Ramona works in Kuwait, and Jordan is an easy plane ride for both of us. With a $60 roundtrip flight over Veteran’s Day, it worked out perfectly for us both. And when working out the itinerary, the Dead Sea only about an hour from the airport, it was clearly going to be our first stop. 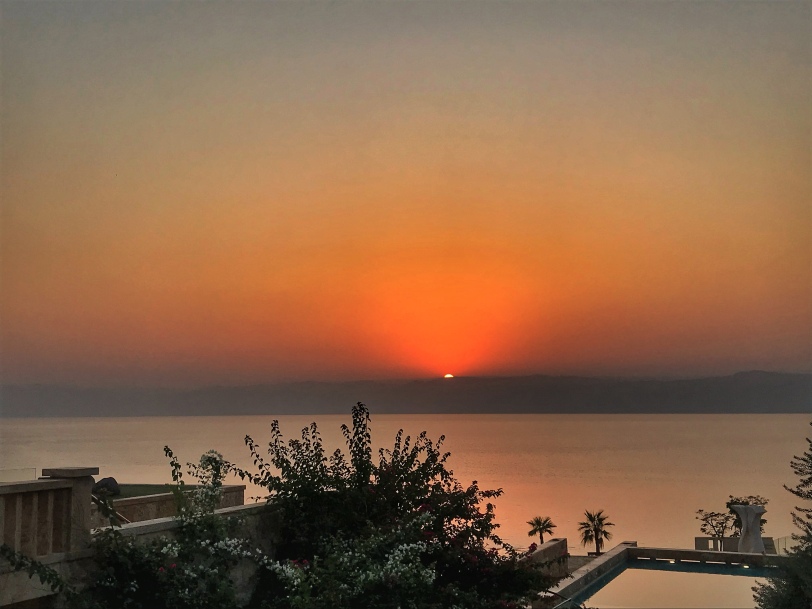 Sunset over the Dead Sea. These sunsets were fantastic.

The Trip: Just thinking about this trip makes me super relaxed. I should have known it was going to be a good, stress-free trip when in a row of three – the middle seat was empty and I could enjoy the view out the plane comfortably. It was such a clear day I had clear views of the Greek isles and Israel as we flew over. I was expecting a complete desert-like atmosphere as we flew into Jordan, and while it was sandy, there were also crazy landscapes. I was so excited to explore this new country and of course, get to see my good friend. 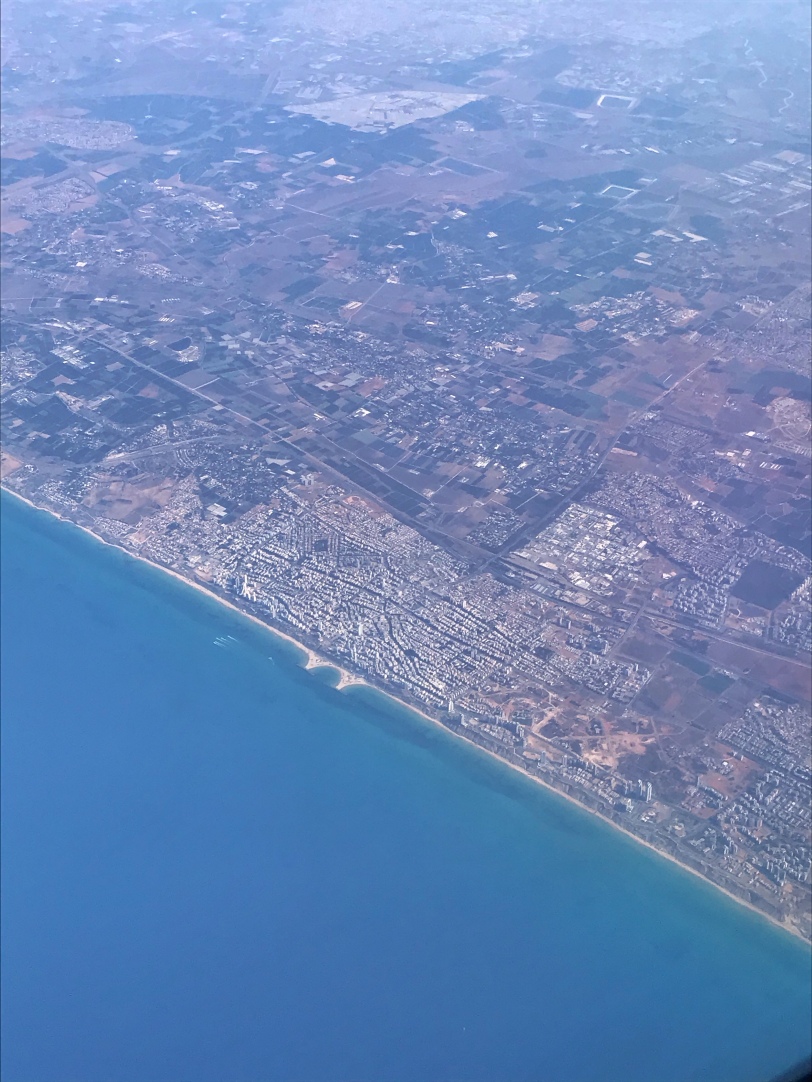 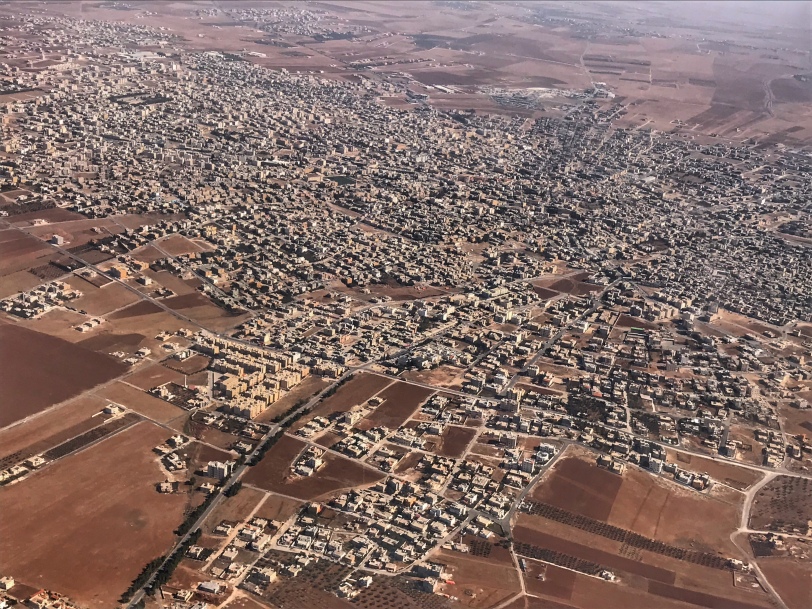 On approach into Amman, Jordan’s capital.

Going through customs took a little bit of time as there are two stations before you can finally get through, but it was not difficult at all. We were doing this on our own – so two American females driving around Jordan. I’m fairly adventurous and comfortable in new places so to be honest, it didn’t cross my mind at all that this could be problematic. As it turns out, we had zero issues – even when our GPS took us through some pretty sketchy areas as we left the capital of Amman on our way to the Dead Sea. And trust me, those were not the areas they recommend to tourists. 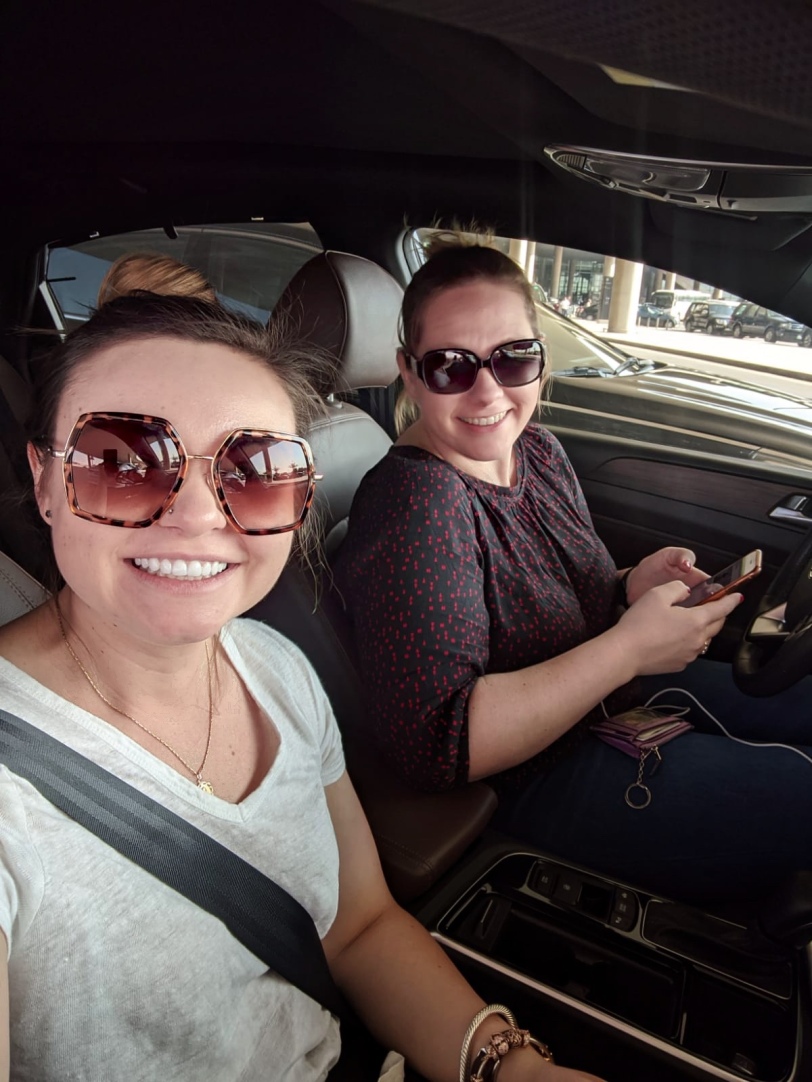 Starting on our Jordan road trip!

Our first planned stop was Mount Nebo, the location where Moses stood and looked out on the Promised Land at the end of his life. It is halfway between the Amman airport and the Dead Sea, so it was a no-brainer. One note – it is cash only, so come prepared. Especially because they have a really neat gift shop where I could have spent a lot of money if I’d had any.

A lot of time isn’t needed – it’s well-marked and laid out and is an easy walk from the car park. My favorite part of this stop was listening to the passage in the Bible that mentions Mount Nebo being read at the top of the hill by a tour group. 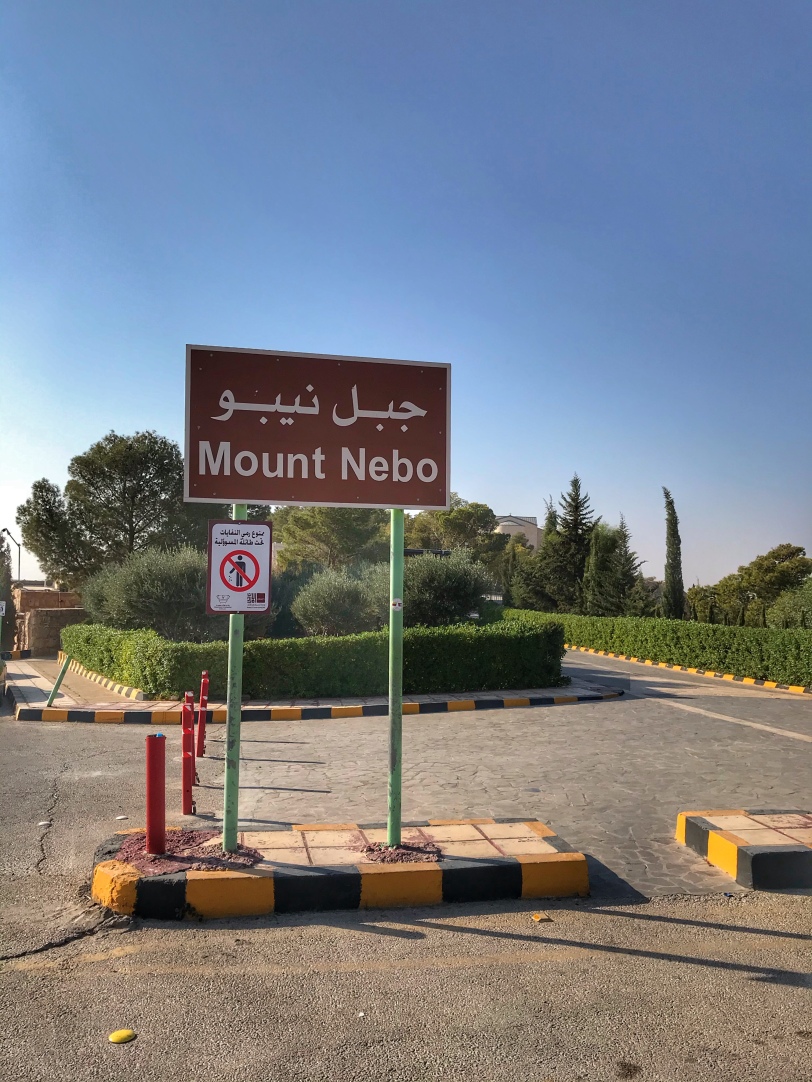 Walking to the summit

The view from Mount Nebo 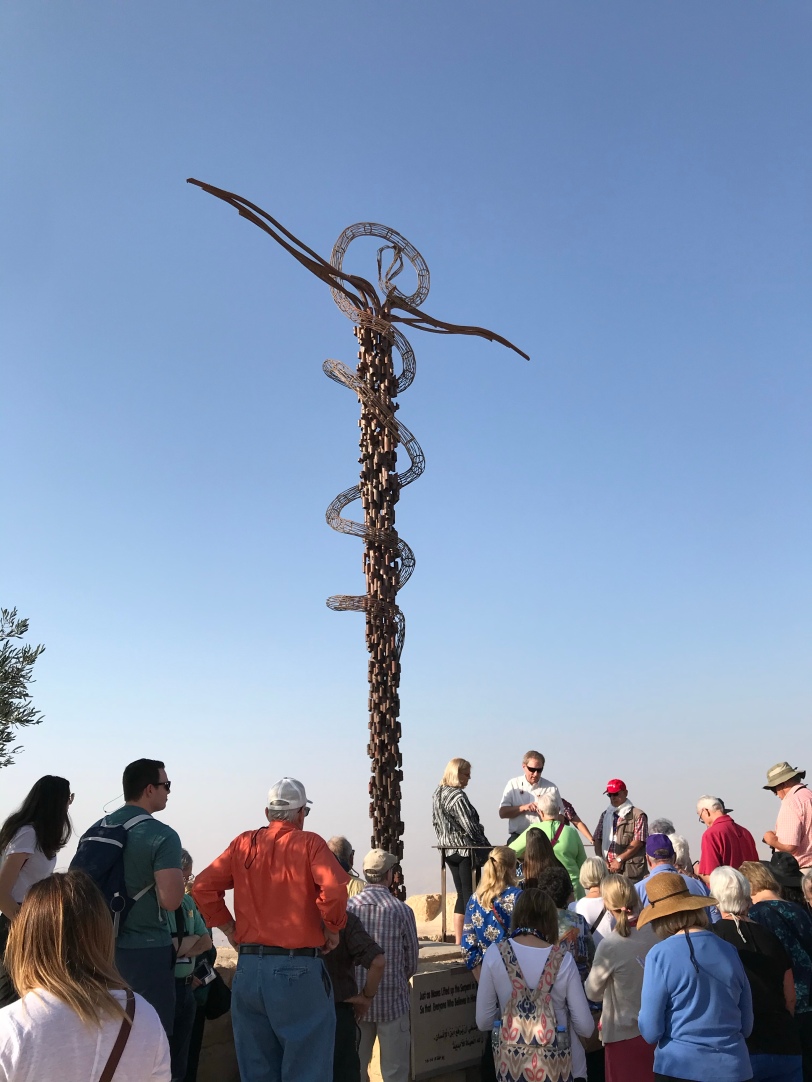 The church group reading the Bible passage about Mount Nebo

More of the view.

So happy to get to hang out with Ramona! ❤️ 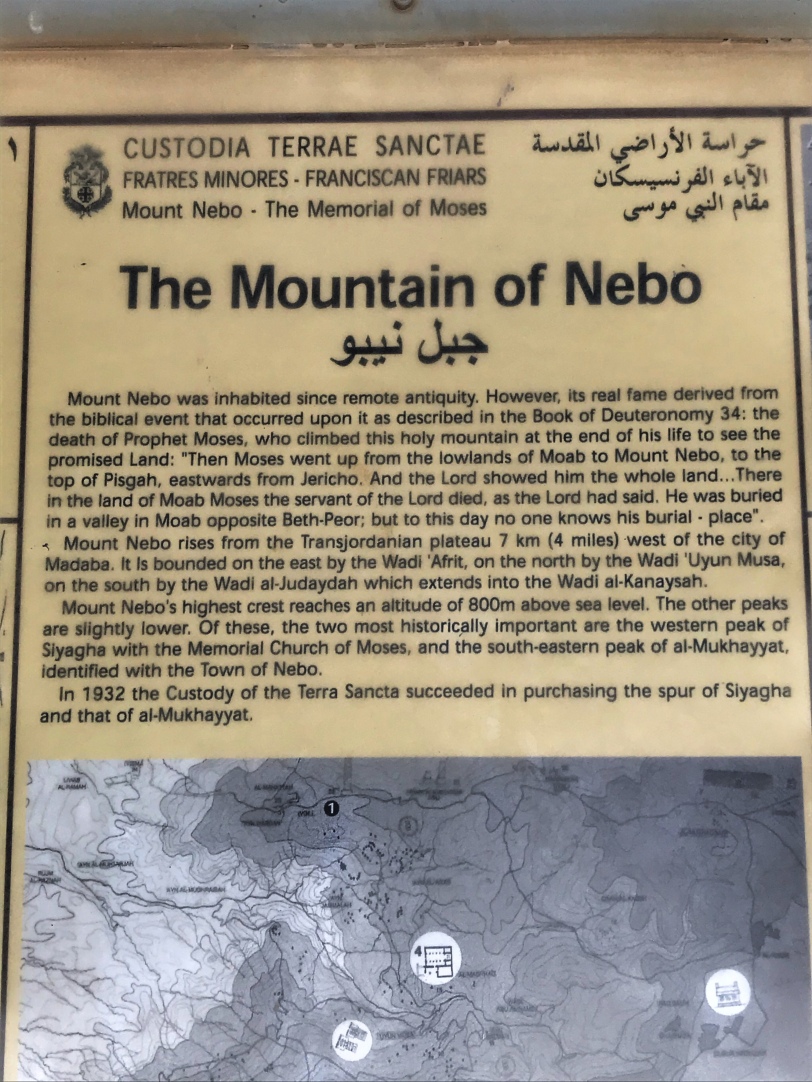 The history of Mount Nebo

There are a number of resorts on the Jordan side of the Dead Sea, and to get to any of them, you have to pass through another checkpoint. We got through easily and not far after that was our nirvana, otherwise known as the Ishtar Dead Sea Kempinskihotel. This was a major splurge for us, but one I would make again and again. The resort is AMAZING. From the time you pull up and it’s valet only, to being escorted to your room, to the service throughout…it was nothing short of wonderful.

The entrance. Even pulling up with two backpacks we were treated so well!

First view of the Dead Sea!!! 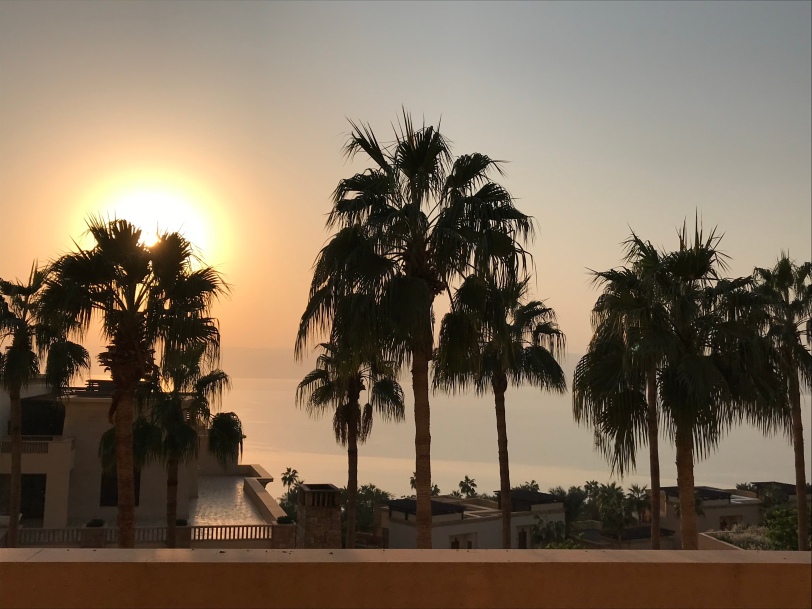 Room with a view!

The back of the resort!

The sunsets were gorgeous…

Walking down to the Dead Sea in the hotel-provided robes! 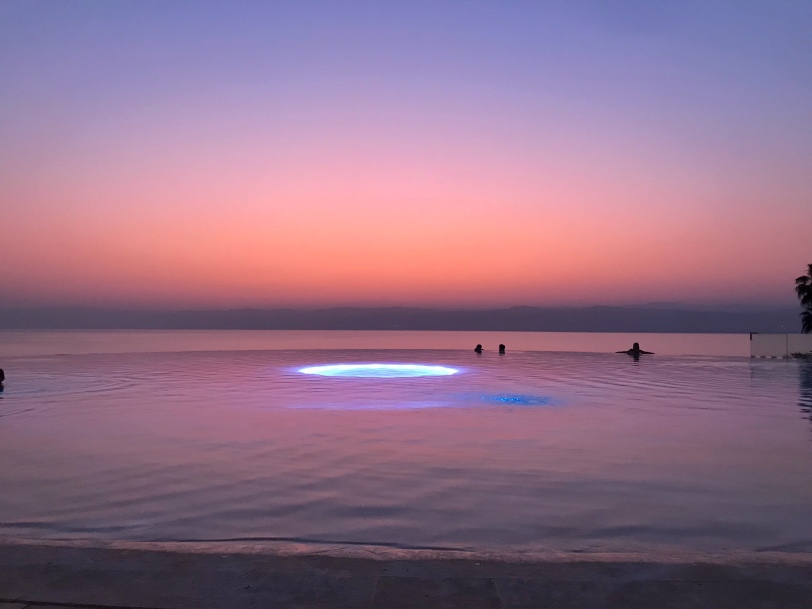 There is not a lack of places to sit and watch the sunset!

Our initial plan was to spend one night there, enjoying the Dead Sea the first night before moving on. But we took our time getting down to the Dead Sea and by the time we got there, it was closed for the night. While we could have gone first thing in the morning before moving on – we opted out of going down to the desert region of Wadi Rum the next day to enjoy the resort instead. It was the BEST DECISION EVER. No FOMO here.

The best part is, you don’t have to leave the resort at all. We made a reservation that night for dinner in the Italian restaurant and it was so good. The highlight, however, is the Jordanian wine! It is delicious – and magical. We spent hours there talking and working our way through the better part of three bottles and woke up without the slightest hint of a headache.

Good wine, great friend – I was so happy! 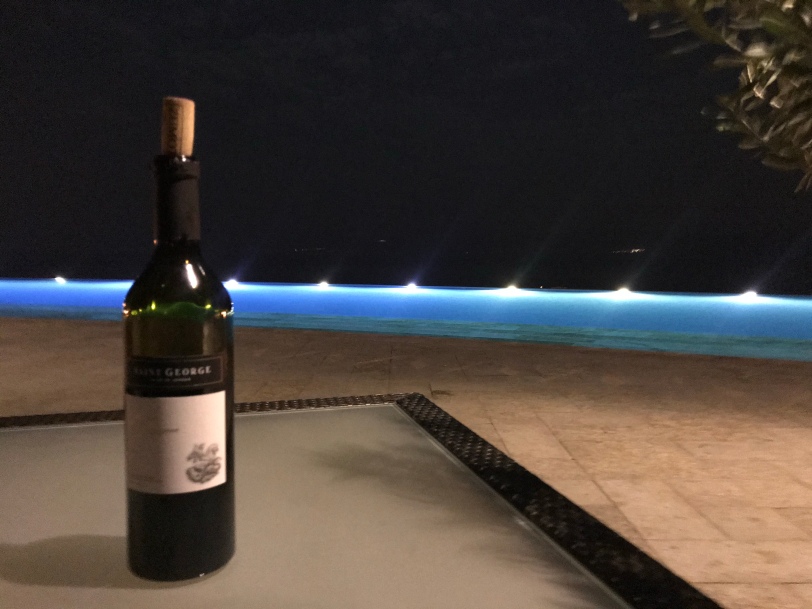 Wine with a view! 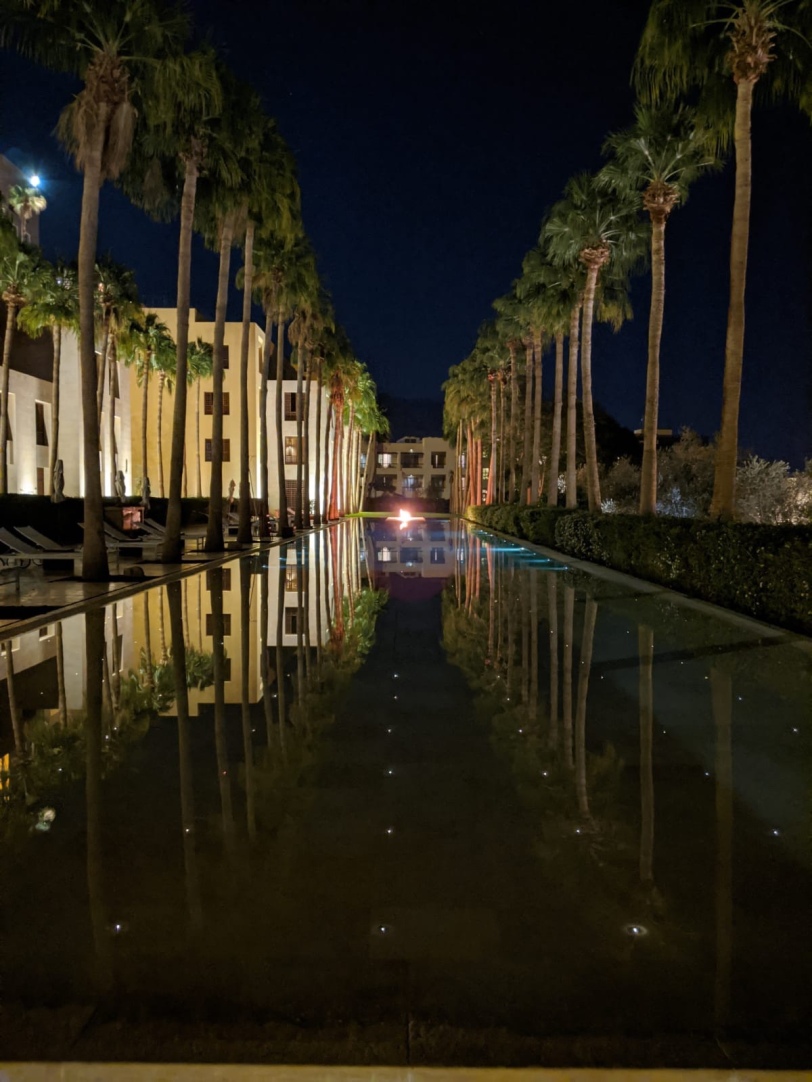 Walking back to our room…the grounds were gorgeous! 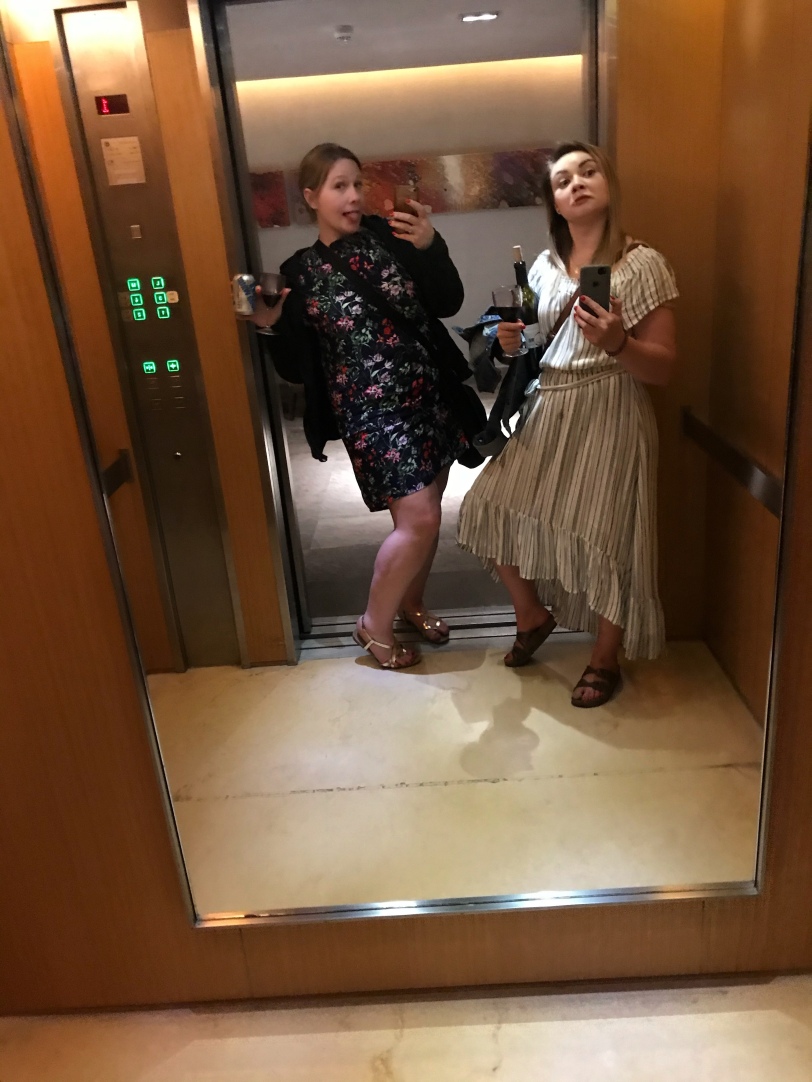 Find yourself friends that you can always be this silly with! ❤️

Our first order of business the next day was the Dead Sea. The hotel has its own private beach, so it was not too crowded at all. As you make your way to the beach, there are directions on how to shape your visit to the Dead Sea. First you soak in the water for about 10 minutes, then you get out and cover yourself in Dead Sea mud (if I could have brought tubs of this back, I would have!). Once it dries, you go back in the Dead Sea and scrub it off. I have never been so soft in my life. It really works that well.

And you really do float. There is zero way not to be buoyant…to the point that it was an ab workout to stay afloat upright because you’re bouncing around so much. It was so fun and a major bucket list item…a bucket list item that I never seriously thought I would ever check off! It’s not recommended to go through the whole mud-rinse process more than twice in a day, so we weren’t down there a super long time.

We woke up to this! 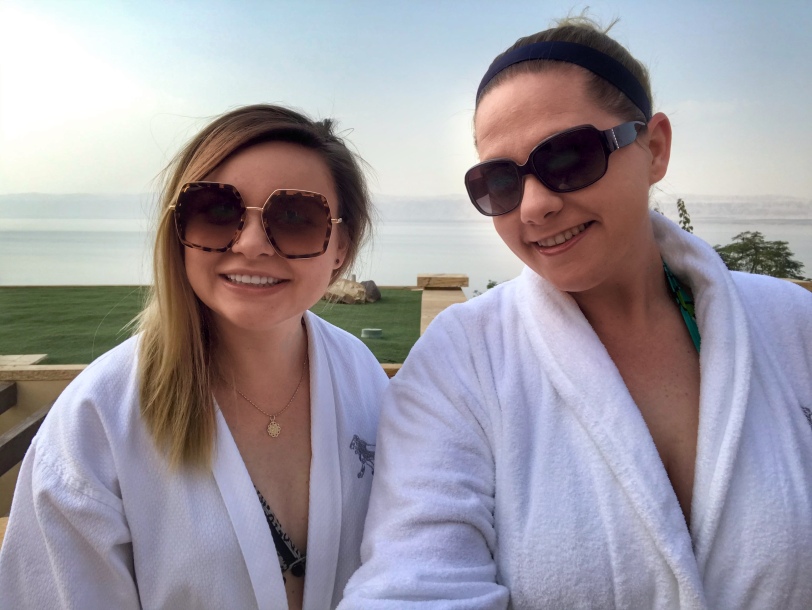 The handy rules, so you know what to do!

More of the walk down.

Before we started floating! 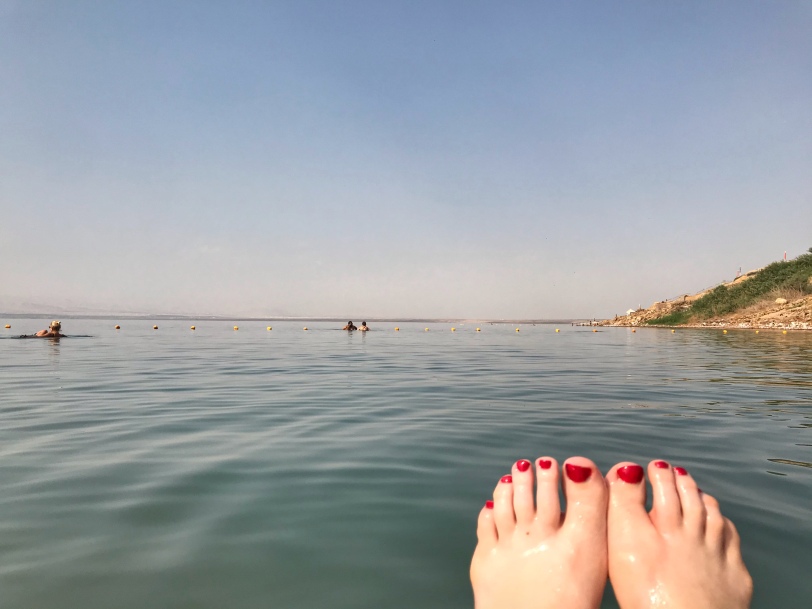 It was an ab workout to stay face up!

Looks effortless but it was definitely hard to just float and not feel like you have to move around…which you don’t! 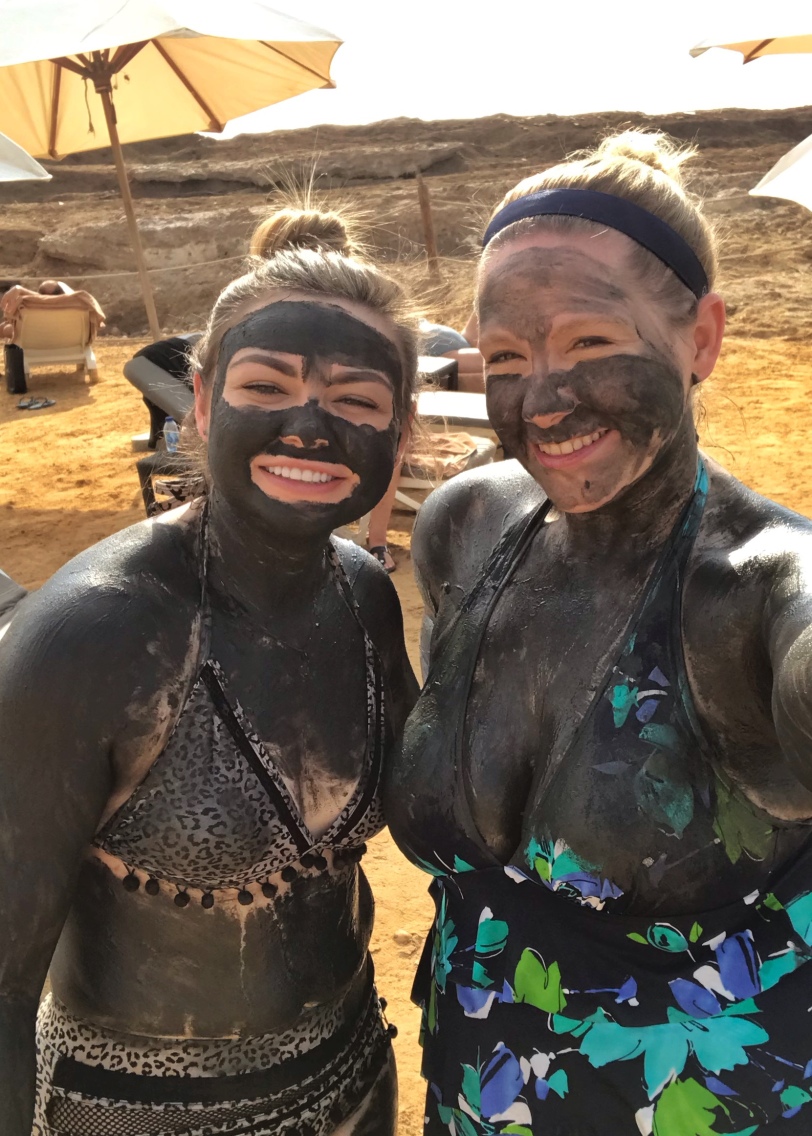 With our mud! Wait until it dries, then rinse in the sea!

We spent the rest of the day just enjoying the resort – which has so many pools, including a gorgeous infinity pool that you can just relax on the edge of while staring at the Dead Sea and Israel in the distance. It was pure heaven. I have not been that relaxed in a very long time. To be honest, had I not really wanted to see Petra, I would have spent the entire time at the resort and plan another trip back to Jordan to see the sites. But, I couldn’t be so close to Petra and not go, so that was our destination the next day!

G&Ts with strawberries and this view – such a good day.

We both needed this day. And this hotel. Can you tell yet how much we loved this?

So many sunset pics…but it was just that pretty! 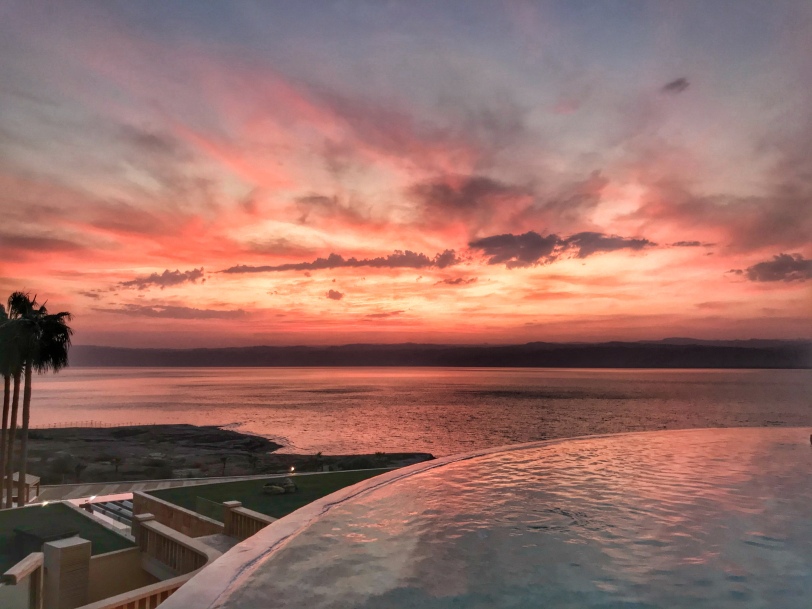 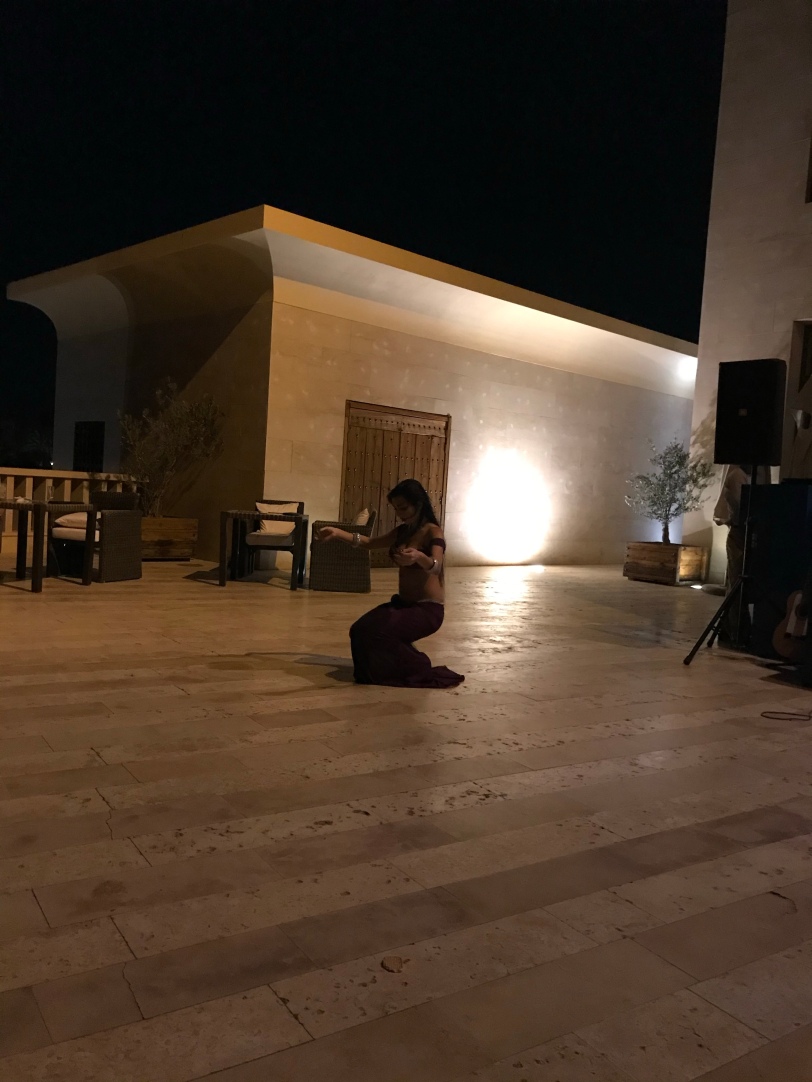 After dinner entertainment! She was so good! 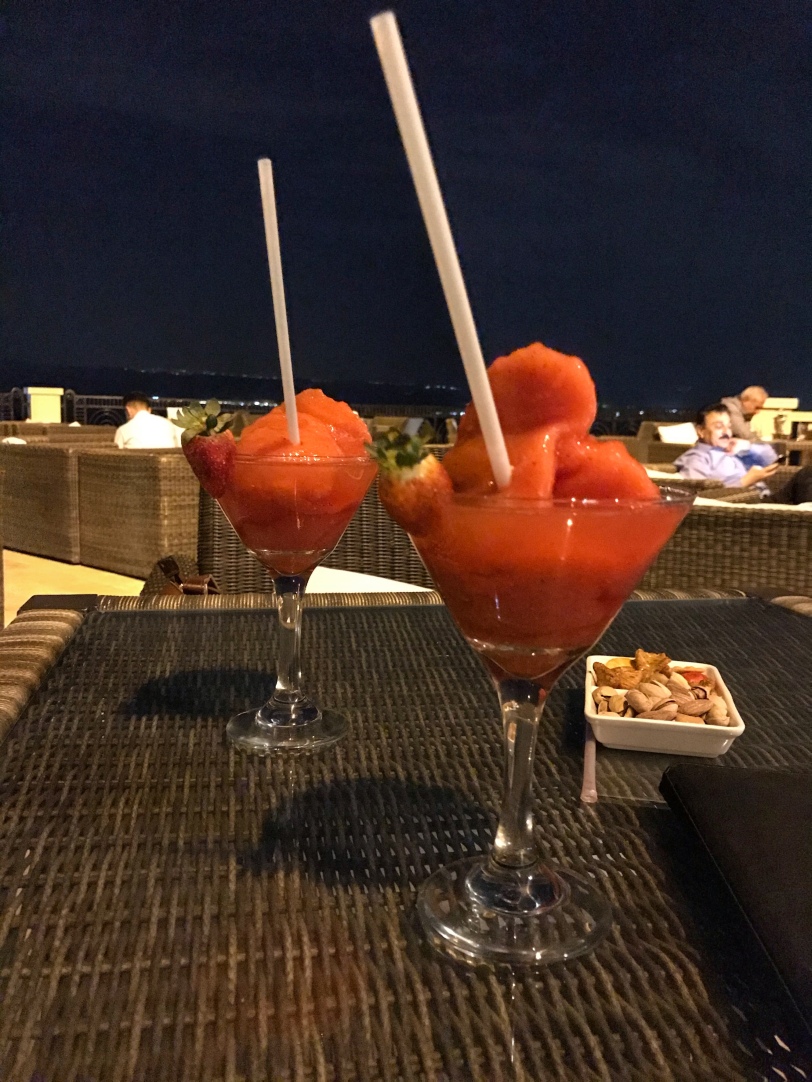 The pool looks like a Nazar!! Which I believe because this place had good vibes only! 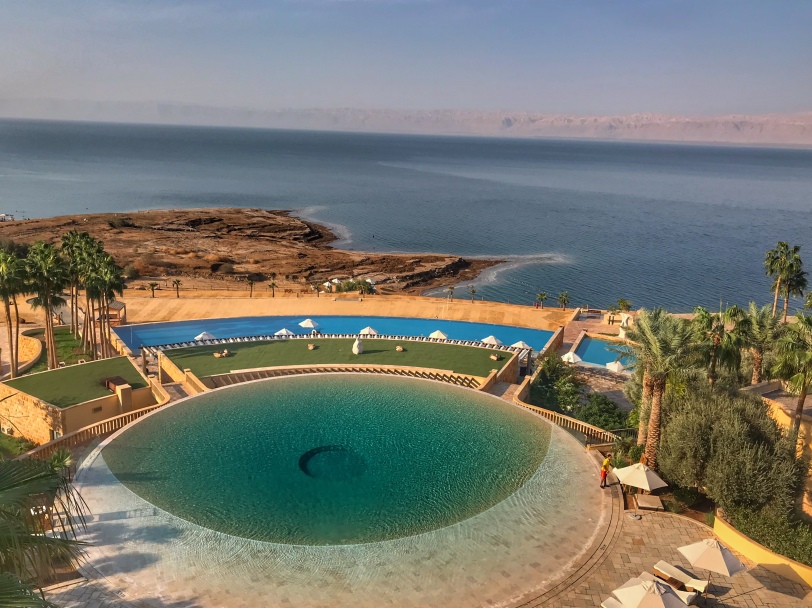 Our last morning…we couldn’t help getting these last pictures!

So many places to explore and so many areas to relax. When given the option, I will always stay at a Kempinski!

Final impressions: I would go back to the Kempinski hotel and the Dead Sea in a heartbeat. It was so peaceful and so nice. We traveled at the perfect time – it was hot without being oppressive and it was the off-season so the hotel was blissfully clear of crowds. I’m not even bummed we missed the bubble hotel for the second night, because it was so worth two nights in this gorgeous hotel and wonderful setting. Not to mention the baby soft skin a float in the Dead Sea affords. I have no doubt a return trip will happen one day.

This totally makes me want to book another trip immediately.

One thought on “Dead Sea, Jordan”