Where: Petra, Jordan
When: November 2019
Hotel: Petra Moon Hotel
Why Petra: Petra is a World Wonder, and I was definitely not missing out on seeing it on a trip to Jordan. I follow 300+ travel pages (so it seems) on Instagram and the number of Petra pictures popping up have tripled. I was so, so excited to see it myself.

The Trip: After two nights on the Dead Sea (recap here), Ramona and I sadly moved on from our nirvana, the Kempinski, and were set to make our way down to Petra. Here’s the thing about Jordan…there is SO MUCH TO SEE. So when we found out that the archeologist-verified site of Jesus’ Baptism was nearby, we added this detour into the trip. (More about it on a different post). However, this detour set us back some, and it was going to be tight to make it to see Petra during the day. We picked to visit it on a Monday when they open Petra up at night, but I still wanted to see it during the day.

Even better/worse, the drive down is CRAZY pretty with the first part hugging the entire length of the Dead Sea before we climbed over mountains – so we were stopping to take pictures all along the way, pressing us even more for time.

We had to stop because it was so pretty! 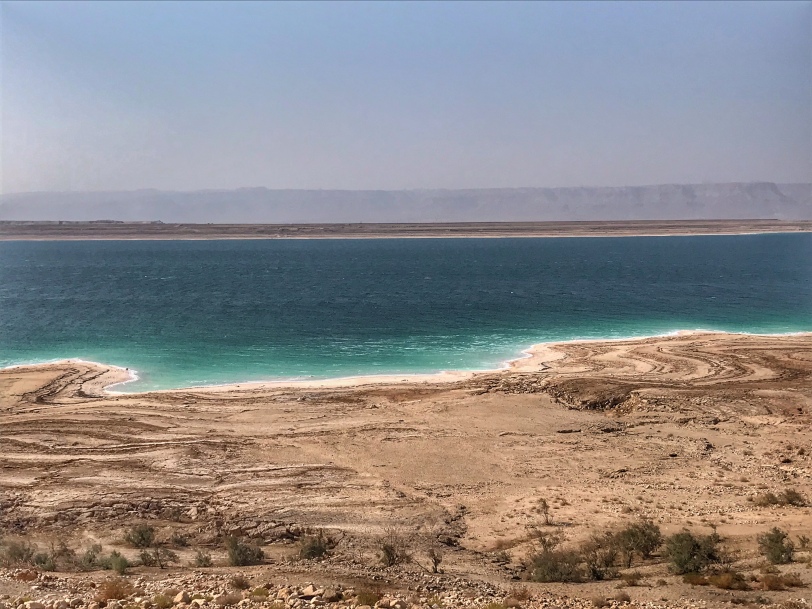 I don’t know what I expected of what the Dead Sea looked like but it wasn’t this!

This car was a trooper…the terrain in Jordan changes so much in a matter of miles. 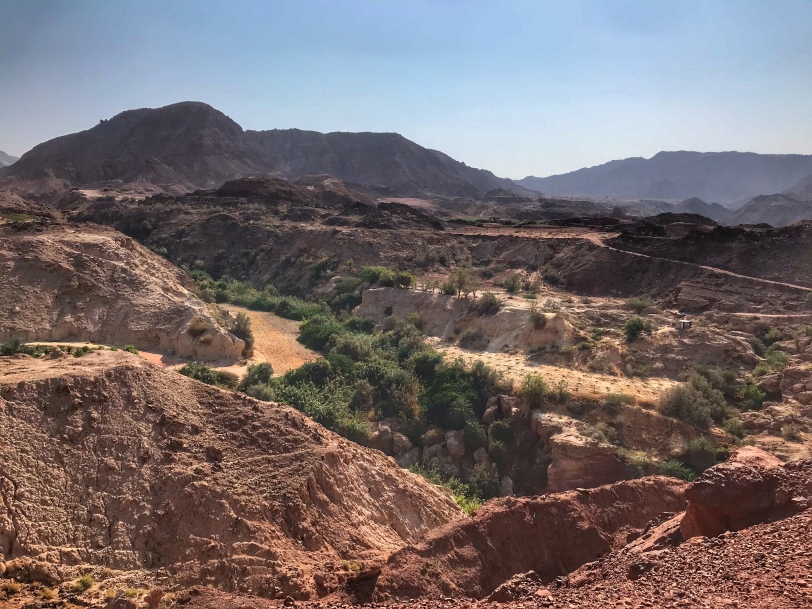 The trip hit an additional snag about halfway to Petra when USAA decided that my card had been hacked in Jordan and shut down all my cards. Thankfully, Ramona’s still worked, so it wasn’t a total emergency but I was getting a little stressed about missing Petra and not having any money. I had put a travel notification on my cards for two years, but it either ran or the bank didn’t believe I was really in Jordan.

I don’t know exactly what I was expecting when we arrived at Petra, but when our hotel said it was about 5 minutes away from the entrance, it wasn’t kidding. We stepped out the front of the hotel and were overlooking the entrance. It’s literally in the city. However, as we found out, this was a little misleading as it’s a brisk 30-minute walk from the entrance to the Treasury through the Siq (canyon-like passageway). We got to the ticket office and were told we only had about two hours in the park before sunset closed it, and we were given the option for a guide. I would definitely recommend the guide – he pointed out landmarks we would have otherwise missed and was a great photographer for us. He also kept us moving since we didn’t have much time.

My stress levels were lowering and I was just enjoying the walk to the heart of Petra!

Those are old tombs built into the rocks. 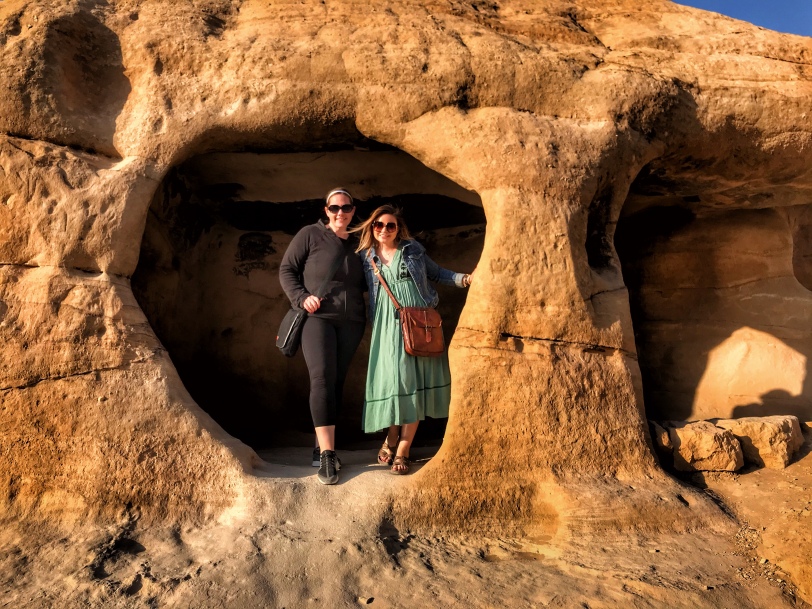 This is why the guide was key!

About to enter the Siq.

The good thing about going late in the afternoon, and on a Monday in November, is that there were not a lot of crowds. I don’t know how much I would have liked Petra if it was packed because the Siq could get tight in spots and with too many people would feel like a cattle drive. Instead, we had plenty of photo opportunities and a chance to really enjoy the walk through the park. I had read ahead of time to get there first thing in the morning, but I would also say late afternoon. You may not get a chance to see everything as the park is huge, but you trade the crowds, which is totally worth it.

Travel with a friend who balances you, and gives you wine when you get stressed! 🙂 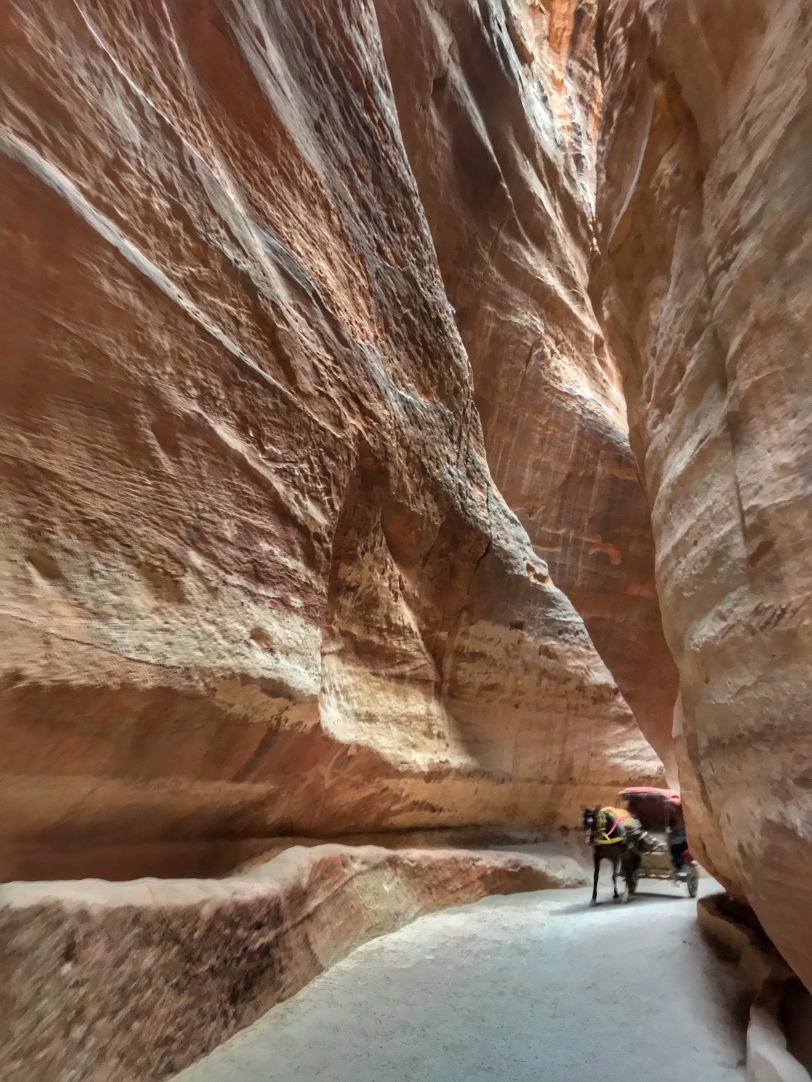 Pictures don’t capture the size and beauty of the rock walls.

When we finally made it to the Treasury, it was a little surreal. Something I never thought I would see in person just right in front of me was a little unbelievable. There is are narrow cliff stairs you can climb to get the overhead view, but it turned out staying on the ground to save time and see more of the park was totally worth it. 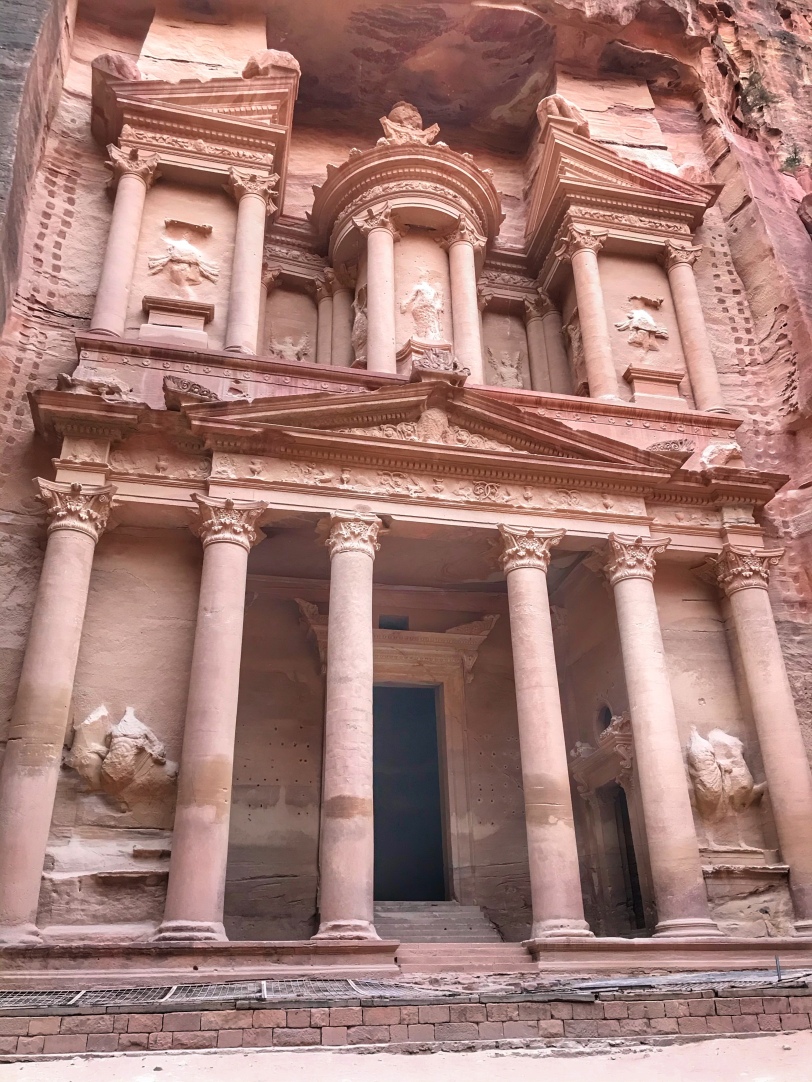 Happy we made it with sunlight to spare!

I’ll be honest, though, my favorite part of Petra wasn’t seeing the Treasury. After we had taken all the pictures, we continued on to the tombs of various nobilities and past the in-tact amphitheater. Throughout the park, you’ll have lots of offers for donkey rides and to shop in little stands as you walk through the park, and when Ramona stopped to buy some handmade bracelets, I walked up a small path for panoramic views.

This was my most memorable moment. It was almost a spiritually calm experience. I took a few pictures and then just sat and watched the sunset on one side and looked at the royal tombs on the other. I was all alone and it was just really nice after a somewhat frazzling afternoon. It brought back all of the zen from the Dead Sea, which was awesome.

The guide sent a young man with a donkey to find me, because it was time to go back to the entrance as we were running out of sunlight and had to hustle back to the front. At least that’s what I told myself as we walked back because the guide was sprinting (not really, but it felt like it) all the way back, which was uphill. The zen was gone and the stress returned. And this is where traveling with good friends helps. Ramona sat with me on a step as I called USAA to get my cards turned back on, and then took me to a restaurant to get wine. 🙂 We found a yummy place for dinner before getting ready to see Petra at night. All was right again.

Almost. The hours for Petra at Night are advertised from 8:30-10:30 p.m. But when we showed up at about 9:15 p.m., the ticket office was closed. We literally had to go to the security officer at the front of the entrance who walked us to the second security entrance, where we begged our way in and promised we would hustle to the Treasury.

And here is where expectation did not meet reality. I expected the Siq to be well lit with candles all the way to the main display in front of the treasury, but the lights were spread out and it got really dark in spots. I would be super nervous if I were alone. When we reached the Treasury, to say we were underwhelmed was an understatement. All of those pictures you see of Petra at night are truly doctored because it’s just not as great in reality. We got there by 9:45 p.m., and by 10 p.m., they were hustling people out. So if you do go, get there right at 8:30 p.m. to really get the full experience.

Walking down to the Treasury 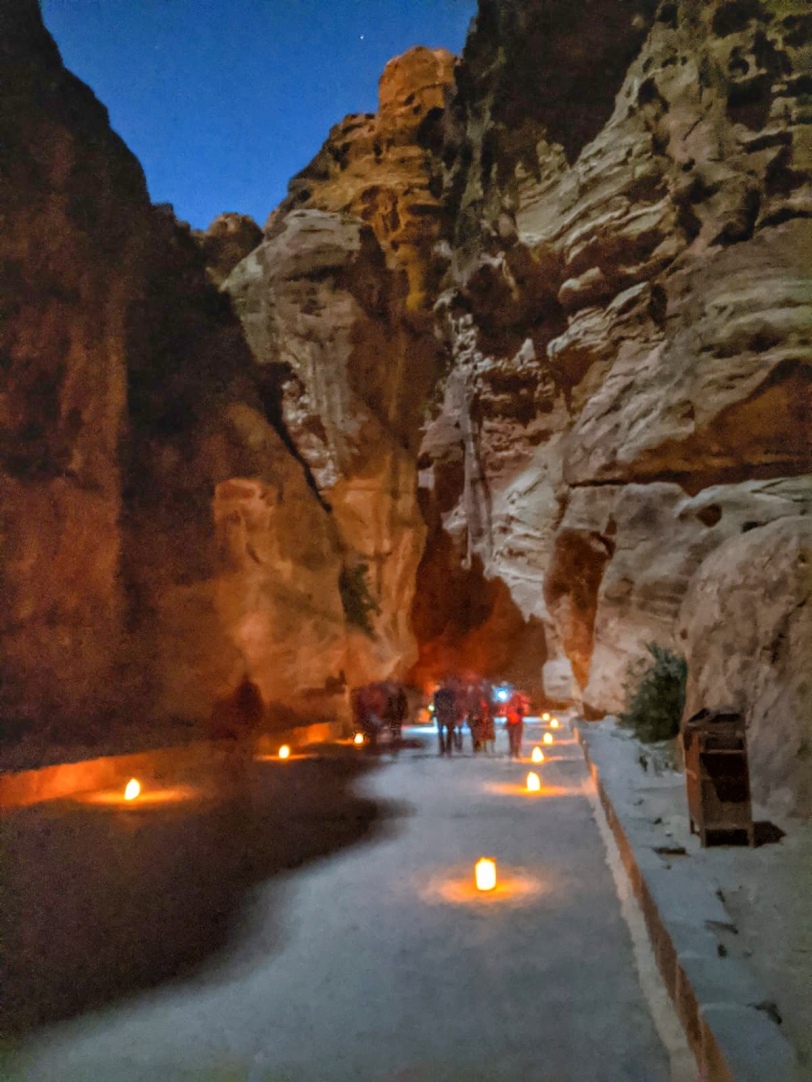 So happy I got this time with Ramona! 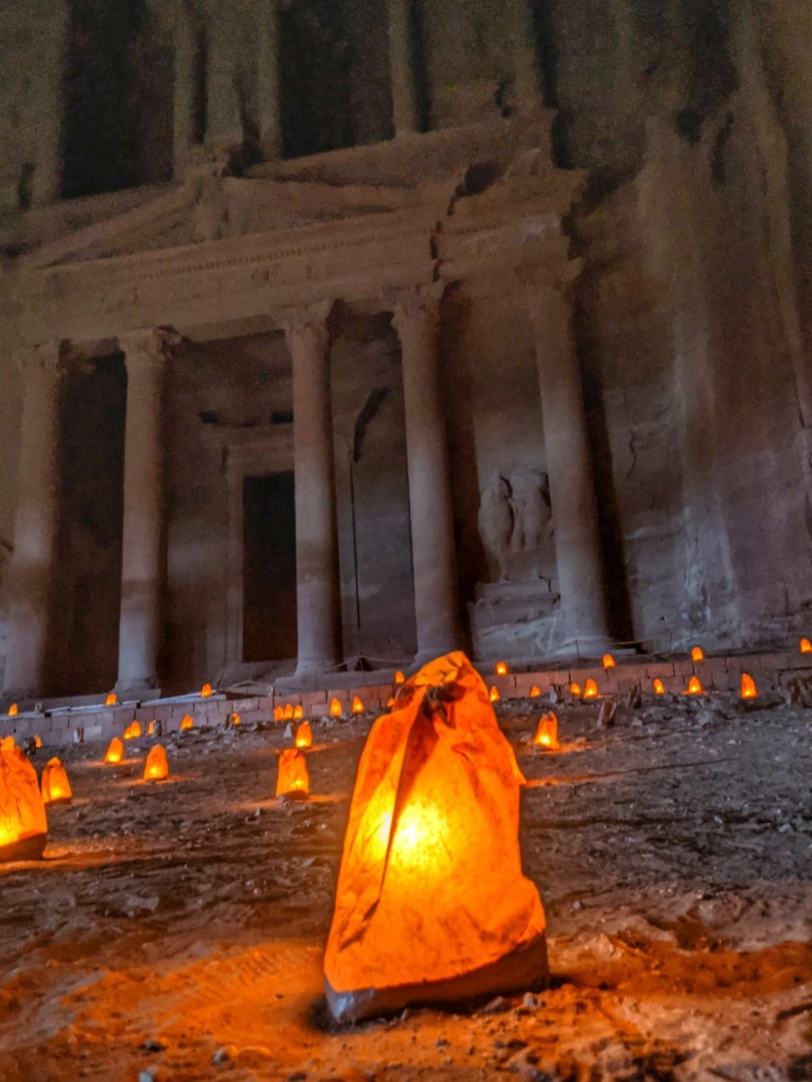 Final Thoughts: Even with the added craziness of the day, Petra by day was amazing and gorgeous. Having only a couple of hours to enjoy the park was enough, although I would go back to make it out to the Monastery the next time. If we had only gone to Petra at night, we would have missed out on so much, so it’s definitely not recommended to only do that. But most importantly, go with a good friend who, when times get a little crazy, gives you wine. 😉