It’s been awhile since I posted, which means my goal of catching up on our travel narratives by the end of the year isn’t going to happen. Oh well, there is always 2020 to catch up on the delinquent posts.

I was thinking about 2019, and how far we have come in 10 years. In 2009, the only country I had ever been to beside the United States was Canada, which doesn’t count because the border is 30 minutes from my childhood home. By the end of 2019, I have been been to 35 countries and 4 continents. In the last year alone, we traveled to 15 countries, 5 new to us, and hit those previously mentioned continents – North America, Europe, Africa and Asia.

It truly is amazing how much can change in a decade.

From dating in 2009 to getting engaged and then married in 2010, from one home to another for a total of 7 in 10 years, from living in Georgia to spending the better part of the decade in Germany – making the cross-continent move twice in 13 months. From Feb 2013 – Sept 2016, we lived apart for all but 20 months of those four years – clinging to the weeks at a time when we did see each other. 2019 was the first year in recent memories that we didn’t move, and it was almost the first year there were no job changes, except I joined the Air Force Reserves after 12 years in the Georgia Guard.

The one constant in the last six years were the adventures we went on…and they were some good ones, with 2019 holding some of the most amazing so far.

We kicked off our year in Michigan with friends and family, which is always a good way to start a New Year. Two weeks later, we were on our way to an unexpected destination – Morocco!! I was incredibly excited and nervous and a ready to see a new country and a new continent in 2019. RyanAir had just added a route to Marrakech in the fall of 2018, and I jumped quickly when the flights were merely $40 apiece. Marrakech was so much better than I expected and I absolutely would return to see more of the country. 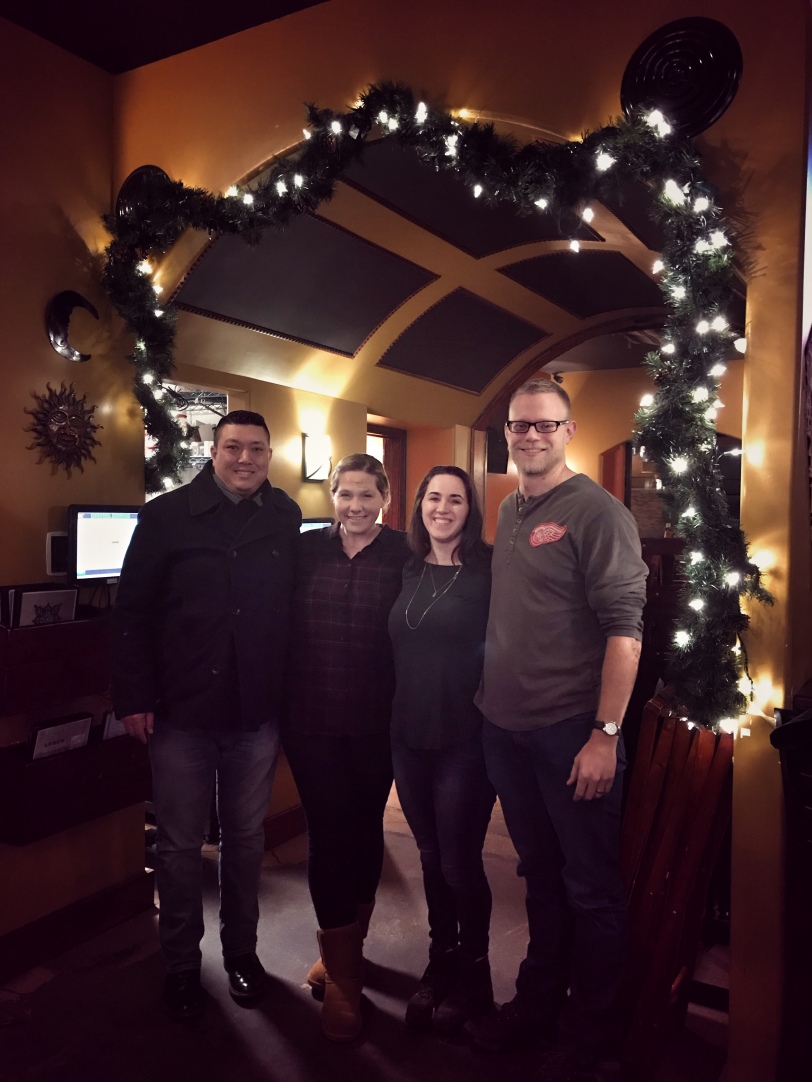 With our dear friends and fantastic travel partners in Michigan on New Years Day.

Riding a camel in Africa. Amazing. 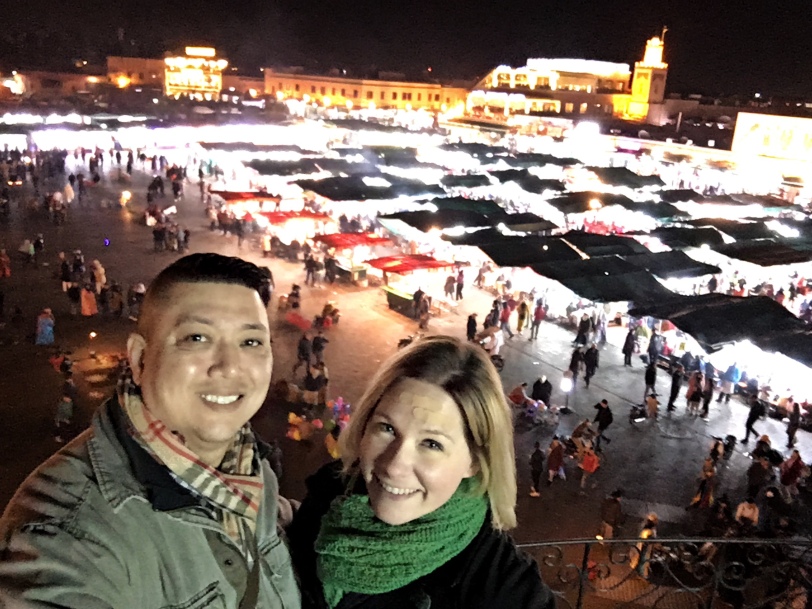 I might still be recovering from the whirlwind that was February. It started with a work trip to the UK, followed three days later by a trip to Venice with four of our favorite travel buddies for Carnevale, followed two days after that by a trip to the US to celebrate my best friend’s 40th birthday. In all, it worked out to be 15 flights in 12 days. Exhausting, but so incredibly worth it.

Exactly what you want when you’re facing multiple flights…a row to myself on my way to the UK for work.

Tip – sit on the right side of the place when flying from Stuttgart to London for these views! 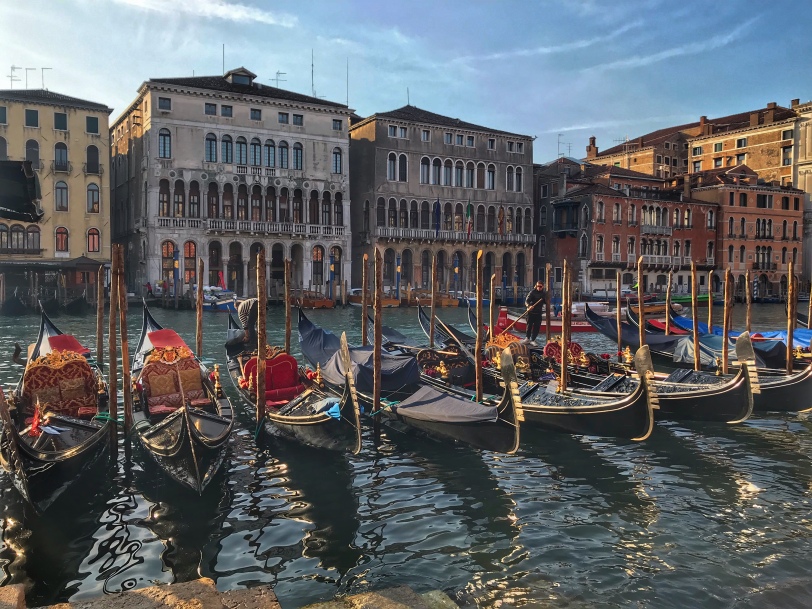 Work up a couple days later to this view right outside of our hotel. 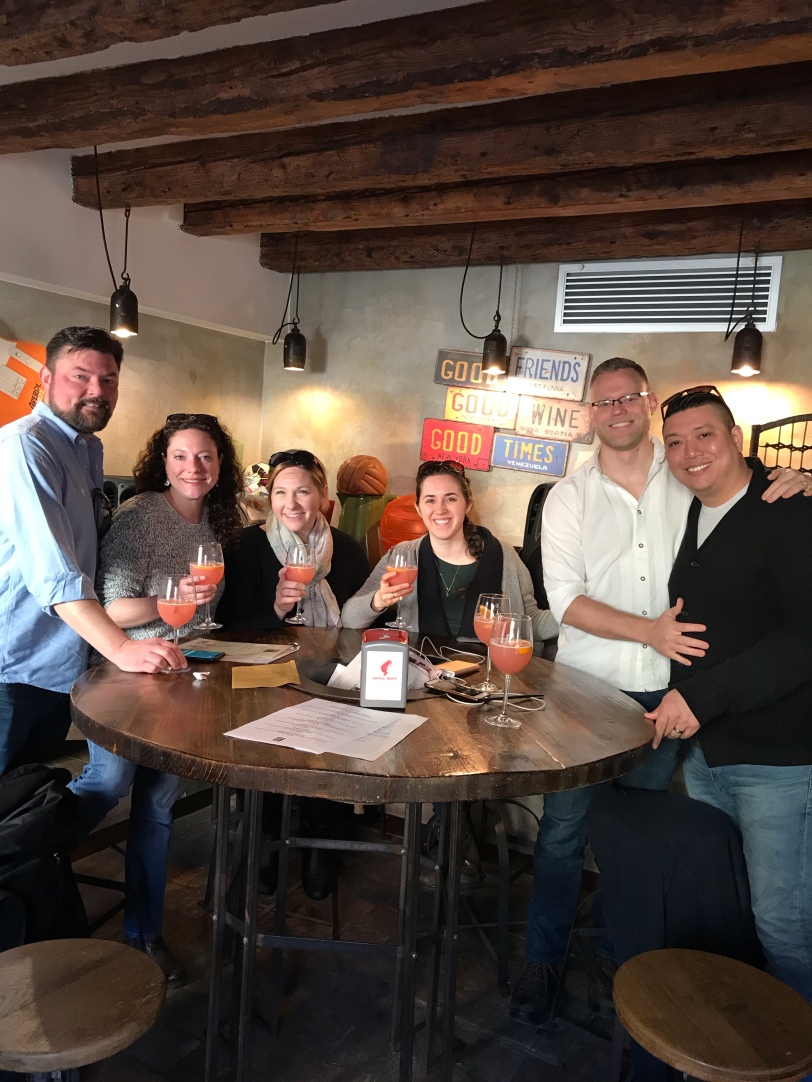 Just a few of my favorite people ever.

The three of us have literally been through so many life events together…that when one is turning 40 and says she wants you there, you go without question.

We had a brief respite in March. We needed it, because of what awaited in April, May, June and July.

My friend Karyn was coming to Europe to run the Paris Marathon in mid-April and so we tacked on a trip to Budapest at the end of it. I wasn’t planning on going to Paris, however, a snow storm cancelled the friends she was going to meet for the race, so on a Wednesday night I booked a train ticket for Friday. Not only did I get to cheer on Karyn and keep her company, but we made the lucky decision to climb Notre Dame…just two days before it caught fire and closed to the public indefinitely. Three days after Paris, my favorite city, we traveled to Budapest, a city I love more each time I visit.

The famous gargoyle on top of Notre Dame – thankful that Karyn and I got a chance to not only see inside of this historic church but also to see the views. Looking forward to when it’s opened again. 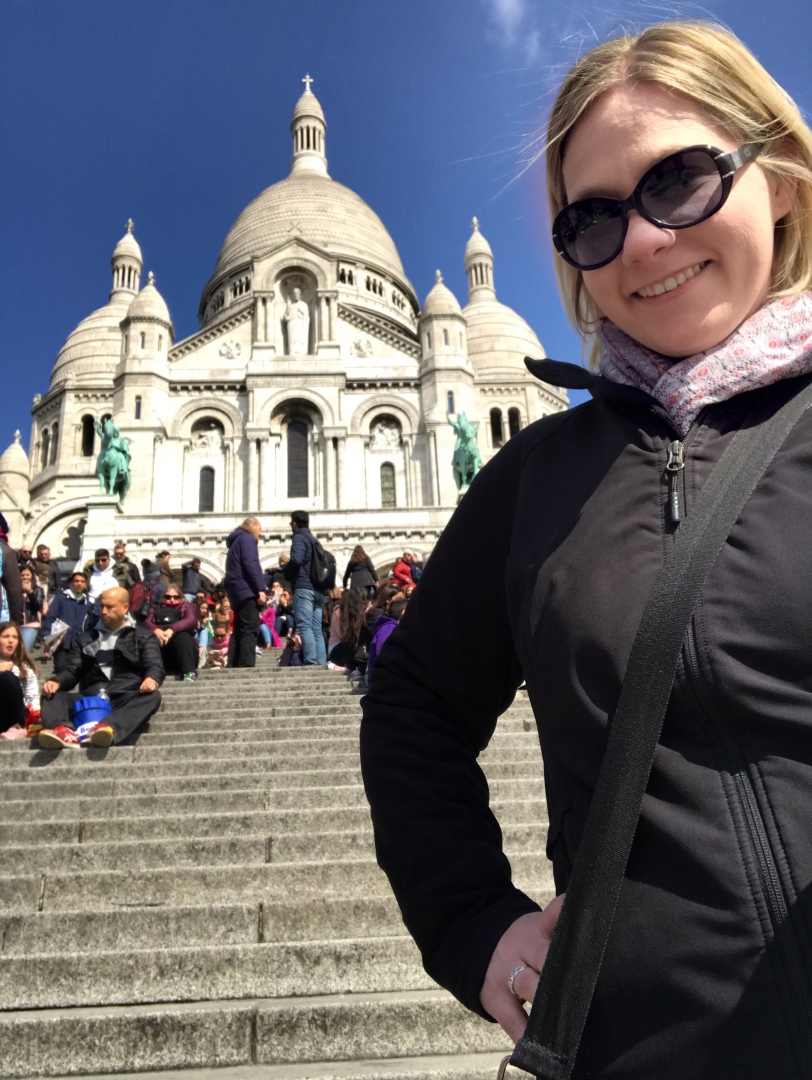 While Karyn ran, I wandered around – and couldn’t miss one of my favorite places in Paris.

The visits and travels continued in May. We welcomed our friends, Jake and Renee, before and after their trip to France (Stuttgart is a great starting point!), and the day they flew out, John’s cousins came to visit. The day after they flew out, we traveled down to Naples and the Amalfi Coast. We barely unpacked before flying back to the States for our nephew’s high school graduation.

Enjoying Fruhlingfest with Jake and Renee! 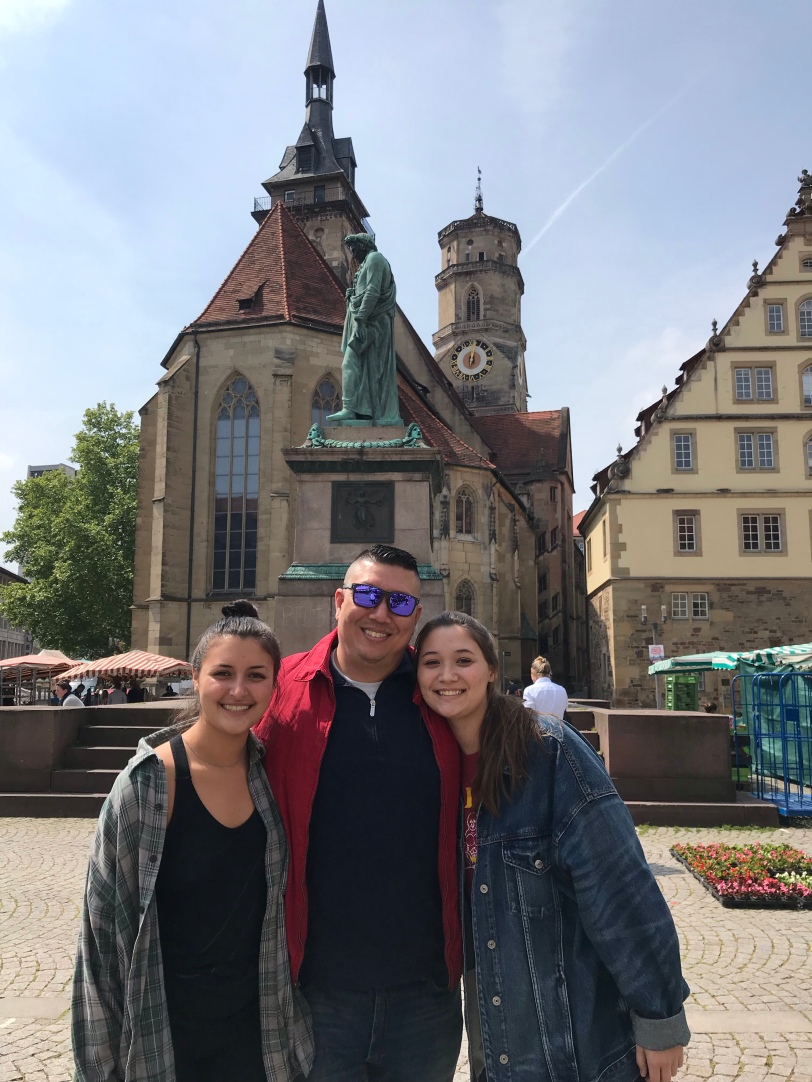 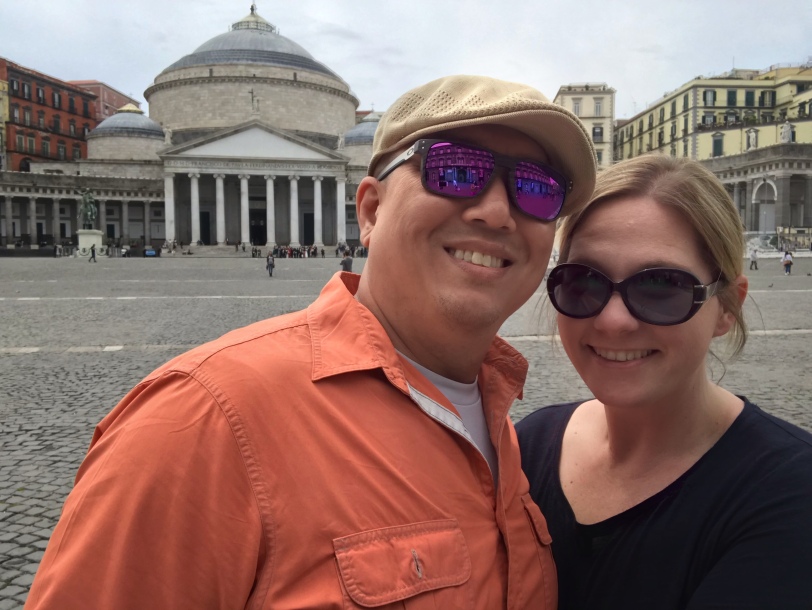 A food tour in Naples

So very proud of Drew!

Thankfully, the goodbye in Michigan to my brother’s family was not sad because they came to Europe for their first visit at the end of June. We had a 9-passenger van and a 4-country itinerary – starting in Bavaria, one of the prettiest areas in Germany.

These guys are troopers – 7 miles the day they landed, with a little hike up a mountain!

The first week of July was a whirlwind, but wonderful road trip that took us to the Czech Republic, Poland, back to Germany and down to France. It was the first vacation John and I had taken in a while that lasted longer than 4 days, and it was just awesome. Little more than a week later, I was spending a quick weekend in Italy shopping for pottery and enjoying Venice once again, this time with girlfriends.

In Prague with our nieces and nephews – so fun showing them Europe!

We were invited on a camping trip with friends in mid-August and it was awesome. The cabins were at the foot of the Zugspitze, the highest point in Germany, and we had fantastic weather and a great time. I definitely want to do it again. At the end of the month, we visited a new country – Finland!

Camping at the foot of the Zugspitze

Not a bad place for a little walk around. 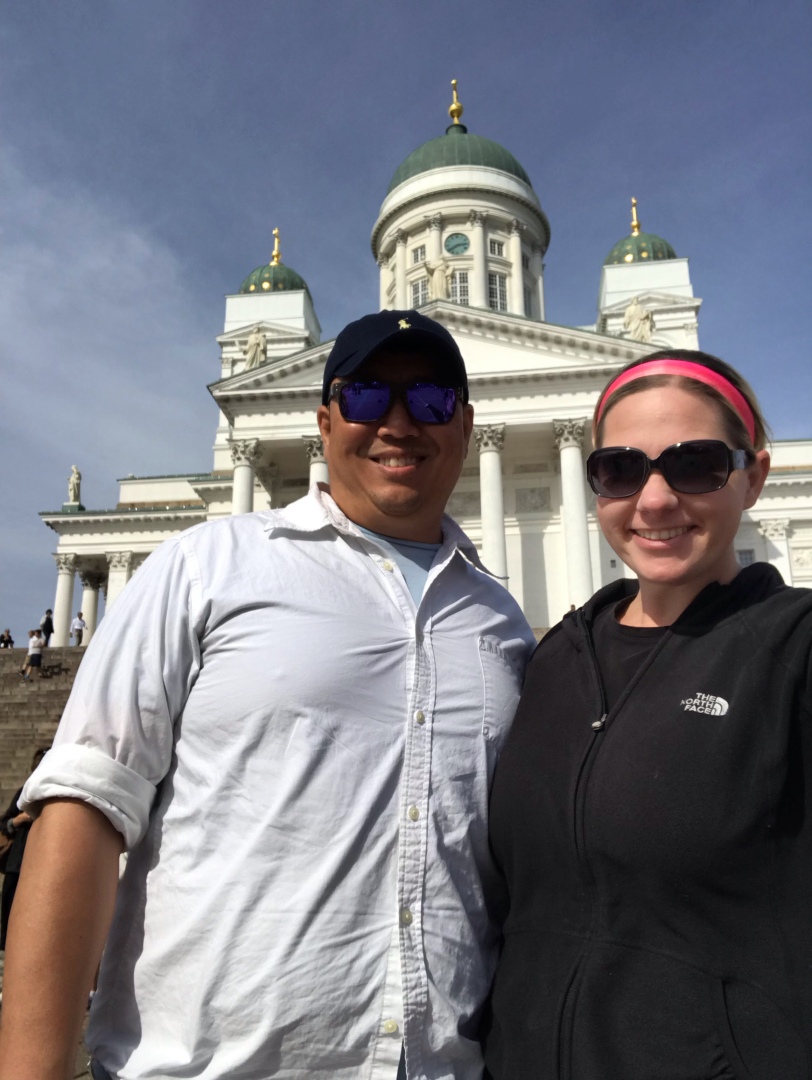 In front of the Helsinki Cathedral 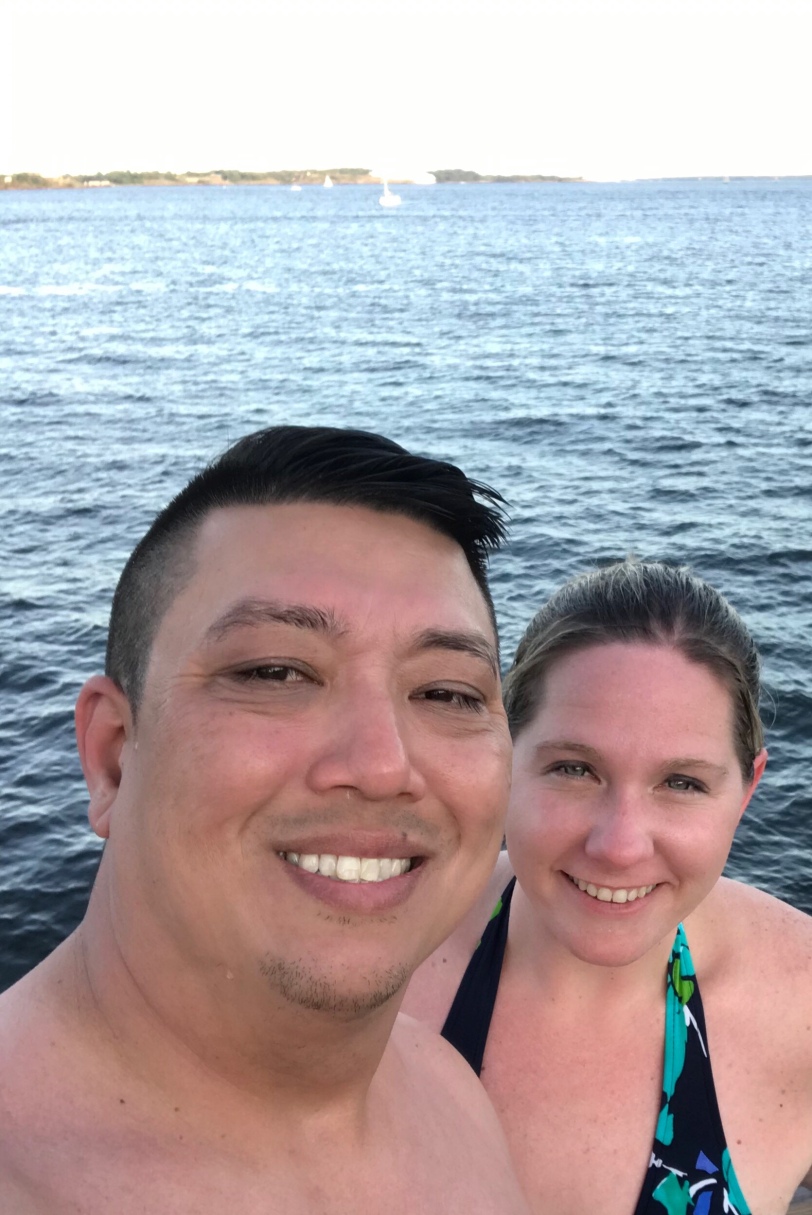 Just a little swim in the Baltic Sea!

Our trip to Helsinki straddled the months of August and September, and from Helsinki we took a ferry to Tallinn, Estonia – our first Baltic country! John had his own work trip to Belgium, which means waffles and beer on his return…a win for us both!

I love this corner in Tallinn

We spent a lot of time on this overlook

October is one of my favorite months – we usually go to a fun location for John’s birthday, and this year, it was a road trip around the Scottish Highlands. And of course, I am a fan because the month ends with our anniversary…9 years and counting! Oh yeah, and I saw David Hasselhoff in concert in Germany. It was amazing. And if that wasn’t enough for October, we spent a little time as Golden Girls characters!

Our first stop on our roadtrip and by far one of my favorite stops!

A glimpse into our future…or, dressing up as characters from the Golden Girls for Halloween! 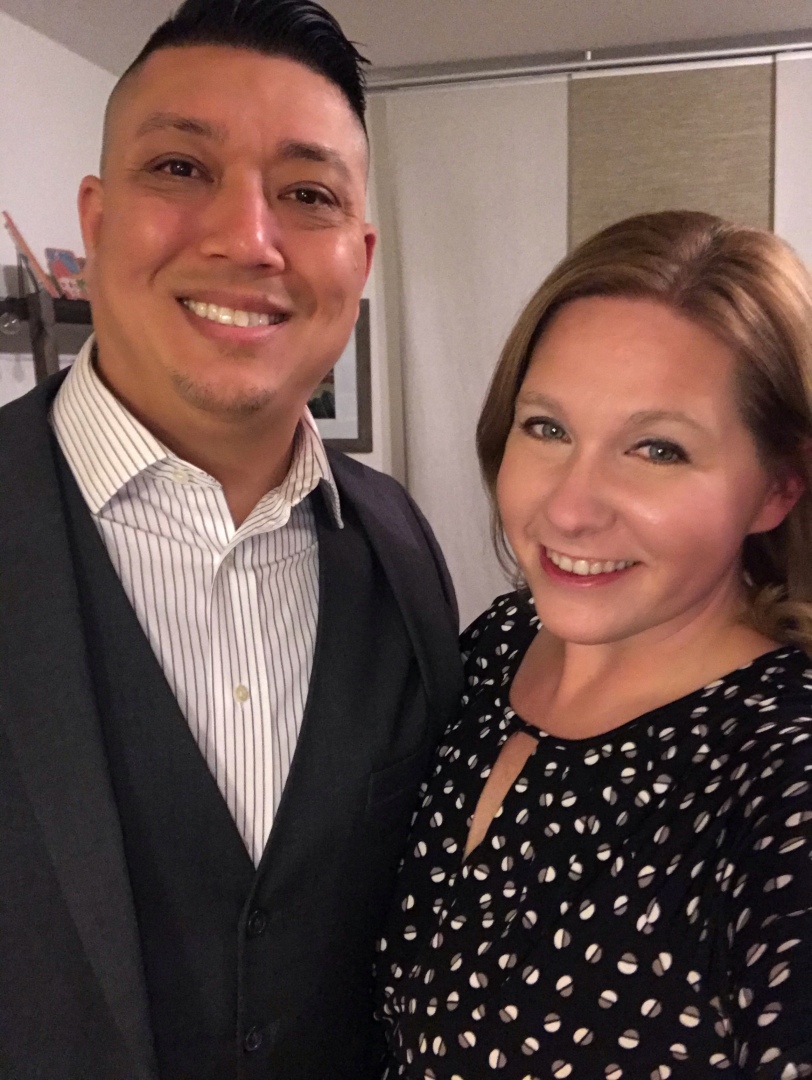 Happy 9 years to us! 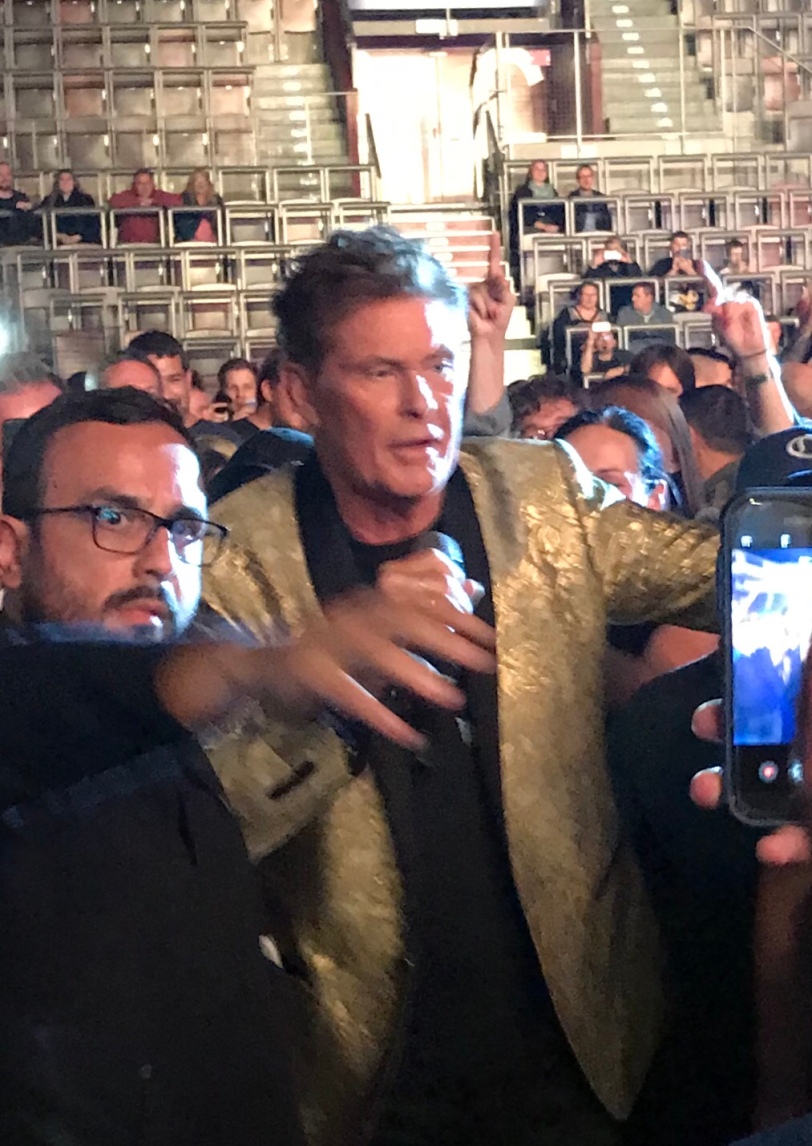 I was this close to the Hoff…and touched his arm!

While John returned to the States for a visit with his mom, I headed to my 4th continent of the year for a girl’s trip with one of my very dear friends. The country of Jordan may not seem like the normal location for a girl’s trip, but it was actually amazing and I would return in a heartbeat. By the end of the month, the Christmas markets had opened and we took a 4-country road trip to visit seven new Christmas markets!

Just a couple of days spent by the Dead Sea in Jordan!

Start of my favorite season in Europe – Christmas markets! 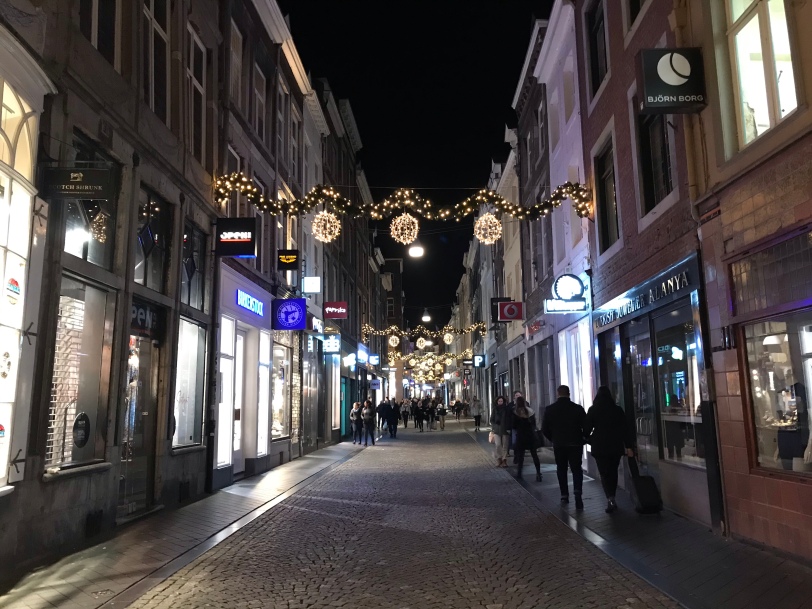 The best part of Cologne.

We celebrated my birthday in Riga, Latvia – our second Baltic country of the year, and an incredibly pleasant surprise and a place I would love to return. In between that and gearing up for a return trip to the states, I managed seven more Christmas markets, with one more than planned for the year! (Which brings the total of Christmas markets visited since 2013 to 49, but 73 if you count return visits…let me know if you need recommendations…I’ve got them!) 🙂 We’re ending this year with the same friends (and more) that we opened 2019 with in Edinburgh for the world-famous Hogmanay celebration. I am beyond excited to see our friends again, and of course, return to Edinburgh.

I love anywhere I can wear this hat and fit in!

If you had told me in 2009 where we would be and where we have been and everything we had been through between then and now, I would never, ever have believed it. More than a couple of times, this year in particular, I have literally looked around and thought, “I am so lucky.” I love traveling and seeing new places and the adventure that comes with it (thankfully John does to…or at least placates me), and I realized how very fortunate we are to have gotten to experience everything that we have this past decade. I’m excited for 2020. If the 2010s were any indication, we are in for quite an adventure.