Where:Paris
When: August 2015
Hotel: Reims
Why Paris:It’s Paris – no reason to visit necessary.

The walking path I took…kind of…I couldn’t google map the times I got lost in between stops! 🙂

The Trip: As recapped here, I had an extra day to fill during my trip to France’s Champagne region and with Paris just an hour away by train ride, it was a no-brainer. Plus, at this point, we were set to move back to the states just over a month after this visit and I wasn’t sure when I would get to Paris again.

However, I had just been there visiting all of the main tourist attractions the month before with my mom, so I wanted to do something I had never done. A quick google search during dinner and a pen on a napkin, and my plan was set – I was going to do a walking tour of the covered passages in Paris. As a win, a majority of the passages are in the 2nd, 3rd, and 4thArrondissments (neighborhoods) and during my previous trips to Paris, I hadn’t spent a lot of time there so it would be all new to me. 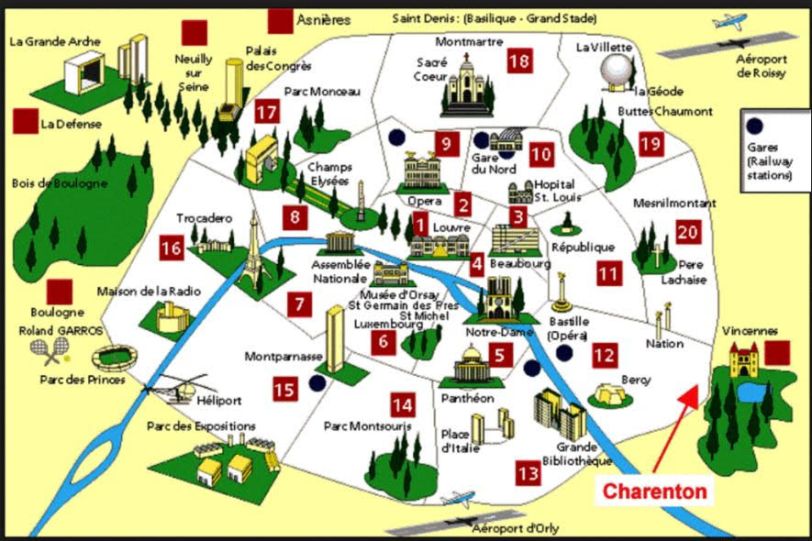 Paris’ Arrondissments – my favorites are 5 (Latin Quarter) and 18 (Montmarte)

The train from Reims pulls into Gare de l’Est, one of the main stations in Paris and one I was very familiar with as this is where the trains from Stuttgart arrive. However, where I would have usually hopped in a taxi or headed to the metro, I set out on foot.

Less than 10 minutes from the station is Canal Saint-Martin, a long canal in the middle of Paris. It was fairly early in the morning (around 9ish…Paris is a late arising town!) so it was pretty empty and not lined with people as usually seen in the photos of the canal. 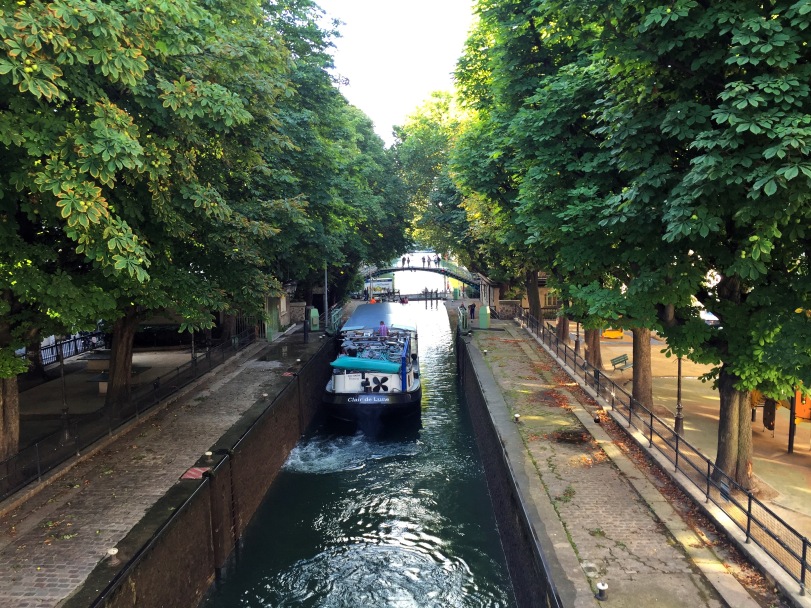 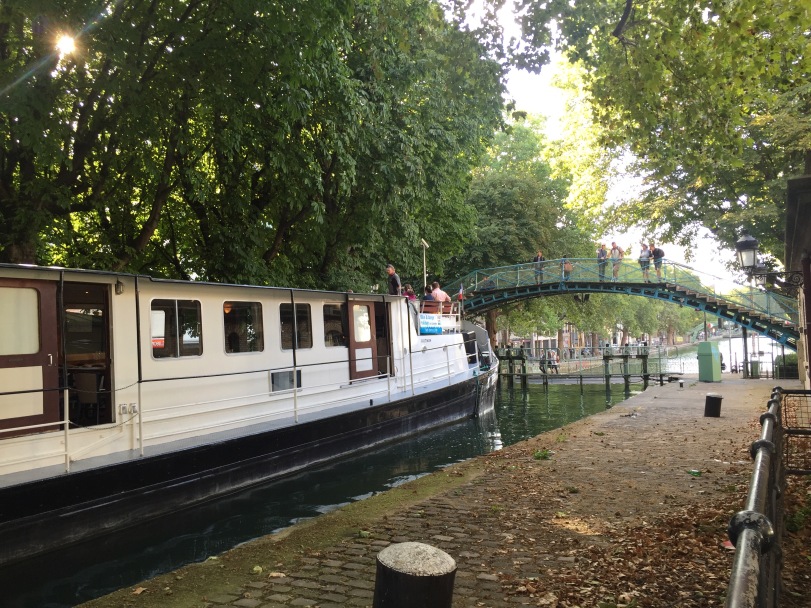 Watching the ships go through was crazy!

To be honest – it wasn’t as pretty (really just the water…it was dirty) as I expected but it was a nice walk along the canal with my cappuccino. I watched a barge and a passenger ship come through the locks (it is connected to the Seine). I can see in the spring or fall, with the leaves and outdoor cafes where people can just relax.

I headed next to Republique, which borders the 3rd, 10thand 11thArrondissments, a very large square named after the French Republic. I was surprised at the activity in the square that was missing from the canal. There were protest tents set up in different areas in the square, the skateboarders were out in full force and some homeless folks had set up home on the benches. I’ll be honest – it was worth a walk through, but I don’t know that I would go out of my way on future visits to return. (Although sadly, it is also one of the areas terrorized just months later with the orchestrated attack on Paris in November 2015).

Statute Marianne – the personification of France – in the middle of Republique

From the Republique, I wandered to Marché les Enfants Rouges, one of Paris’ oldest food markets (it opened in 1628!) and is in the Marais neighborhood. It was still a little early, and even though the market opened at 0900, by 0945, stands were still getting set up. Plus, I had just had my cappuccino and croissant, so I didn’t need much in the market.

Now, I definitely wandered a little farther south than necessary and found myself outside the eyesore that is the Pompidou Center. It has a public library and is also the largest museum of modern art in Europe…which explains why it looks the way it does. Still, I don’t like it. I prefer the traditional Parisien architecture and this is not it! However, I did get lucky because the center is surrounded by dozens of pedestrian side streets that are adorable. And it was also how I happened upon Rue Montorgueil, a cute little street lined with cafes and shops and was just so fun to walk through. I would have spent more time here if I wasn’t on a mission to see some covered passages!

Fountain outside the Pompidou Center

The opposite end of Rue Montorgueil

Not far from Rue Montorgueil is Passage du Grand Cerf, famous for its high glass ceiling that once forced the passageway to close because it was too dangerous to walk under. It was pretty to walk through, but no shops were open or interesting enough to spend time in. 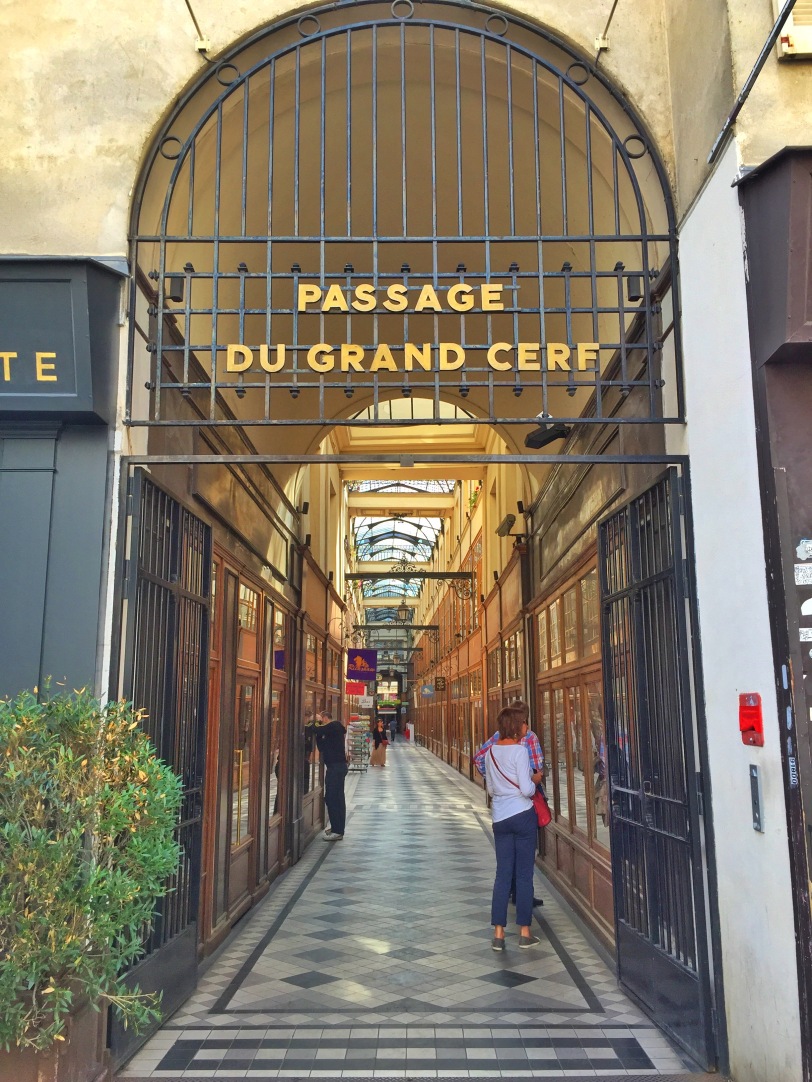 Really quiet inside on a weekday!

I backtracked a bit to find Galerie Vero Dodat (but happily walked down Rue Montorgueil again), home of high end stores that left me only window shopping and quickly walking through. I did pause, however, at the Christian Louboutin storefront!

Note the Louboutin store at the entrance.

From there, I made my way to Galerie Vivienne, a passageway that has been registered as a historical monument since 1974. Again, it was quite subdued with light crowds and with stores I couldn’t afford. 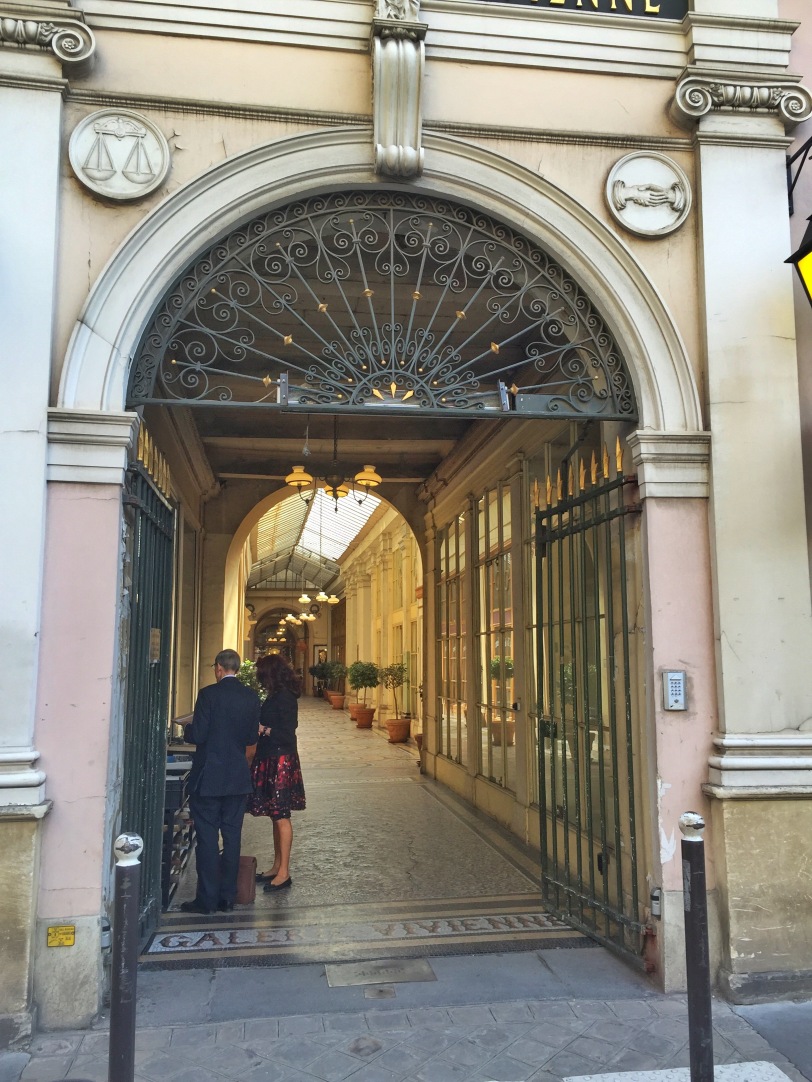 My next stop, however, was much more fun. Passage des Panoramas is one of the oldest covered passages in Europe and one of the first covered market places in Europe. It was full of stores and cafes with outdoor seating areas, despite the tight walkways. It was fun to walk through and I took my time here people watching and window shopping.

I loved this area!

By this point, I was four hours into my day trip and had walked 7 miles! (Paris is a beast! The metro is awesome and if I hadn’t planned so much so close together, I definitely would have used it more!) I took a break at an outdoor café that served Belgian beer and picked what I wanted to do next.

Thank you Paris for having excellent choices of Belgian beer! 🙂

And it was a no-brainer. I’d seen all the markets I wanted, now I wanted to go to one of my favorite neighborhoods – Montmartre! It’s a bit farther out, so while you can take the metro, I treated myself to a taxi ride to the top of the hill. I love this area of Paris. I love wandering the streets to find the last remaining windmill and the small corner vineyard. I like sitting and watching the artists draw portraits and I really like sitting on the steps in front of Sacre Coeur watching the street performers with a gorgeous view of Paris in the background. This and the Latin Quarter are my favorites. 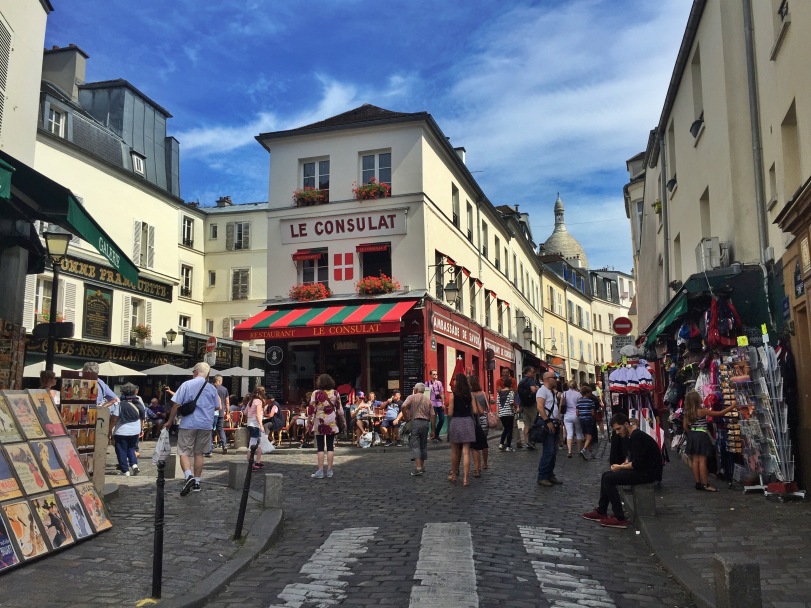 The streets of Montmartre 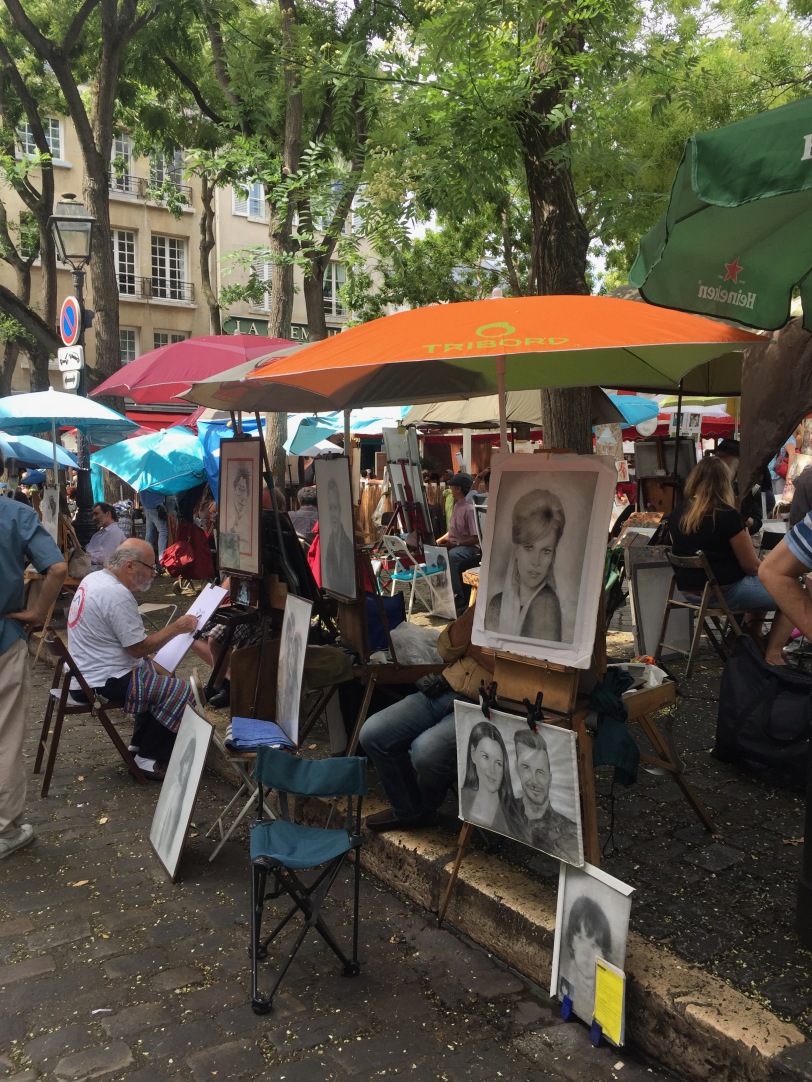 So many options for a portrait 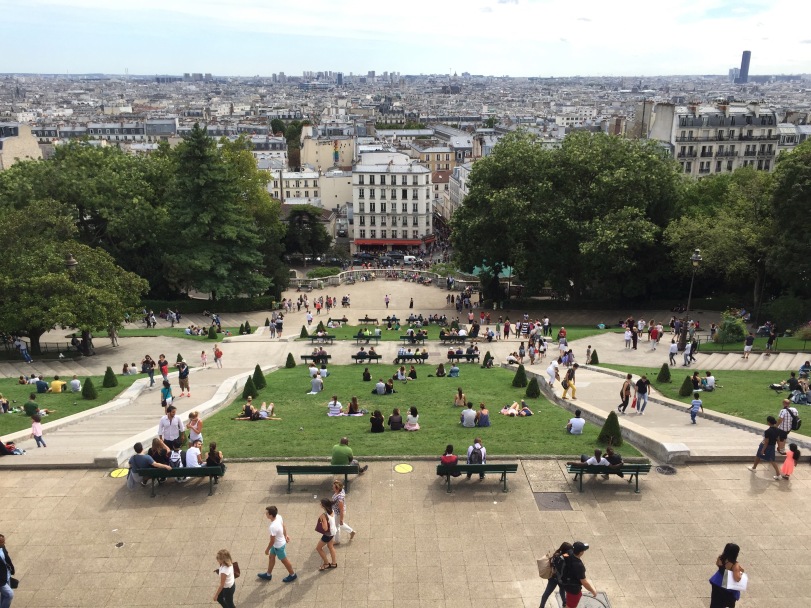 But no trip to Paris is complete without a swing by the Eiffel Tower. It never, ever gets old no matter how many times I see it. I took a taxi from Montmartre (I definitely spoiled myself – but also, Paris is so spread out! The Metro is great but sometimes, you just need to get a taxi!) and had him drop me off at Rue Cler, one of Paris’ best market streets. I surprisingly had one of the best margaritas I have ever had and wandered in and out of stores as I headed to my last stop of the day – the Eiffel Tower. It never gets old, and I just love it! I lounged a little until it was time to head back to the train station and head back to Reims – where I enjoyed one more glass of champagne! 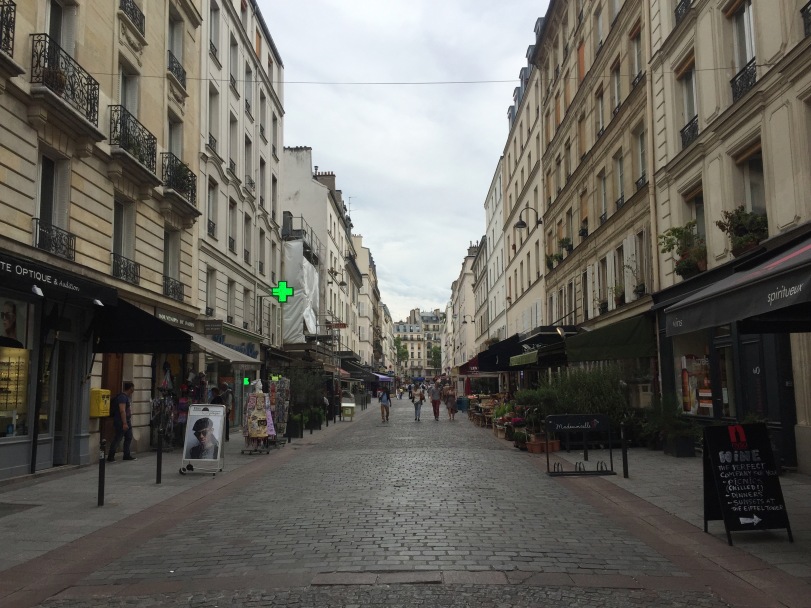 Seriously, one of the best margaritas ever – in Paris!

This was with taxis and metros!! So much walking!

I earned this last glass!

Final impressions: Paris is my favorite, no matter how cliché that sounds. I always discover something new when I go (which stands at 6 visits…and I had always only hoped to go once!) I ended the day walking 11 miles and still didn’t scratch the surface. I am so glad I spent the day there – it’s good to go and see all of the famous sites, but the second time (or 3rd, 4thor 5th) should be spent exploring the side streets and off the beaten path pedestrian zones – that’s where Paris really shines.