Where: Marrakesh, Morocco
When: January 2019
Hotel: Riad Les Nuits de Marrakech
Why Marrakech: Well, the biggest sway was the $40 round trip airline tickets. However, Morocco had peaked my interest for awhile – it’s a different continent, which I was definitely interested in visiting and from everything I had read, it was going to be unlike anywhere I had ever been. John has been to Egypt before, which is similar to Morocco and in fact, it took some convincing to get him to agree to go. However, in a weak moment he agreed and I booked the flights quickly. I figure we’ll start at the top of the African continent and work our way down. I have my sights set on a safari some day. 😉 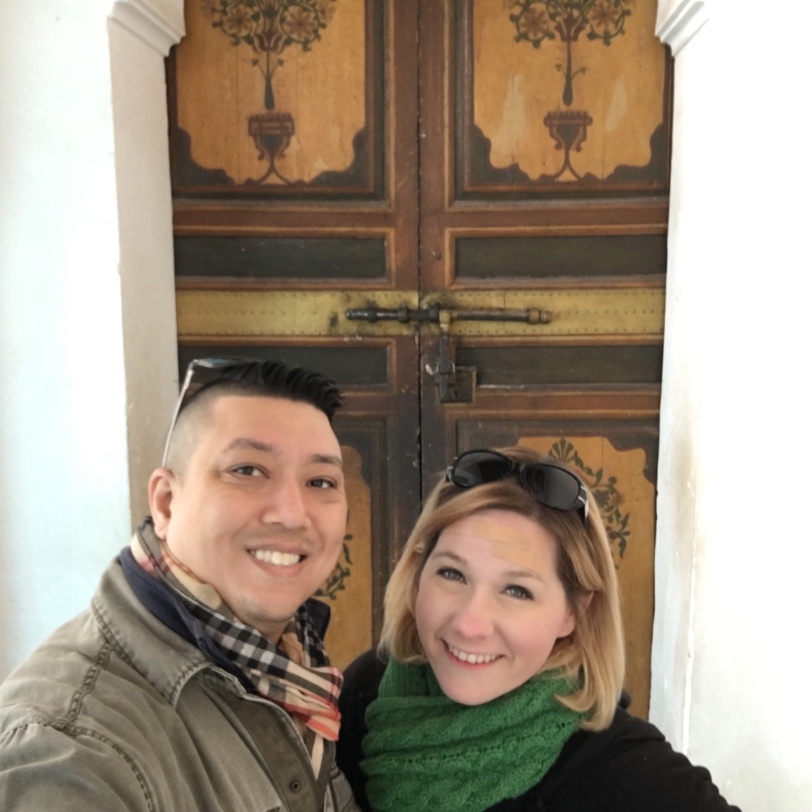 At the Bahia Palace in Marrakech!

The Trip: RyanAir has finally smartened up and realized there is a huge US military and government presence in Stuttgart and has added a load of new, inexpensive flights from Stuttgart to locations all over Europe and one to Africa (Marrakech). I was thankfully early to the game and booked the flights before the price jumped.

Once the flight was set and before any itineraries were set, I had to pick a place to stay. I wanted us to stay in a Riad, which originally was a traditional Moroccan home that was inwardly focused. The outside of these homes are plain with no windows, but on the inside is a courtyard that contains fountains and is framed by the rooms. 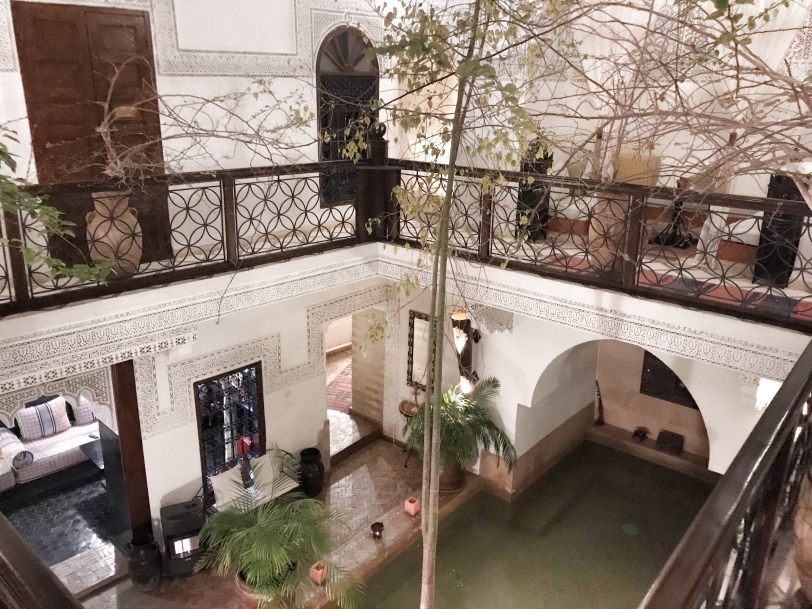 The inside of our riad. Instead of a fountain, there was a pool (but too chilly for swimming!)

The former homes have now turned into hotels, and in Marrakech there are THOUSANDS! I am not kidding – thousands. And all of them seemingly had amazing reviews on booking.com so the narrowing down process took forever. In fact, I didn’t book ours until a couple of days before we left – something I never, ever do. I am not a last-minute person, especially with a trip like this! It was stressful. Eventually, I booked Riad Les Nuits de Marrakech, which was a bit pricier than most but worth it. We received free airport transportation, free water whenever (huge because the proprietor told us not to use the water from the sink to brush our teeth), a delicious breakfast, an afternoon tea and cakes, and an owner who was incredibly helpful. I completely recommend it. 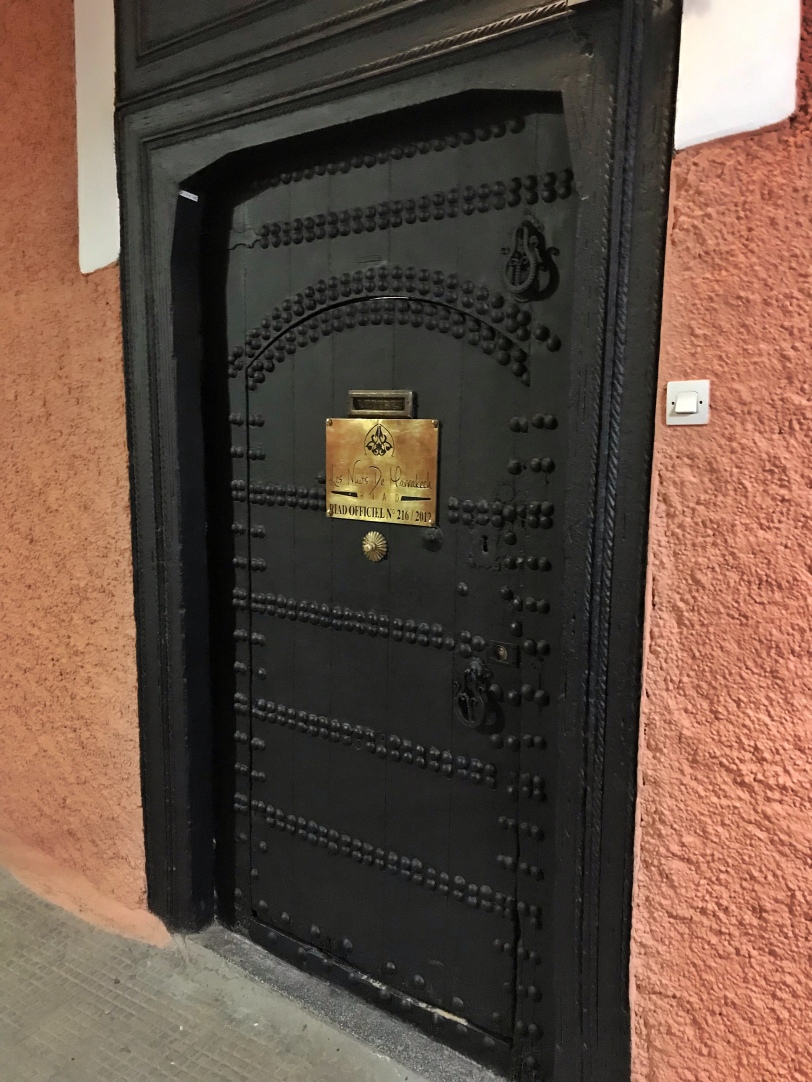 The outside of our riad – very understated as most Moroccan buildings are per the Islamic beliefs of hiding riches and wealth.

Our yummy breakfast, which also included eggs and pancakes!

And with a great view! 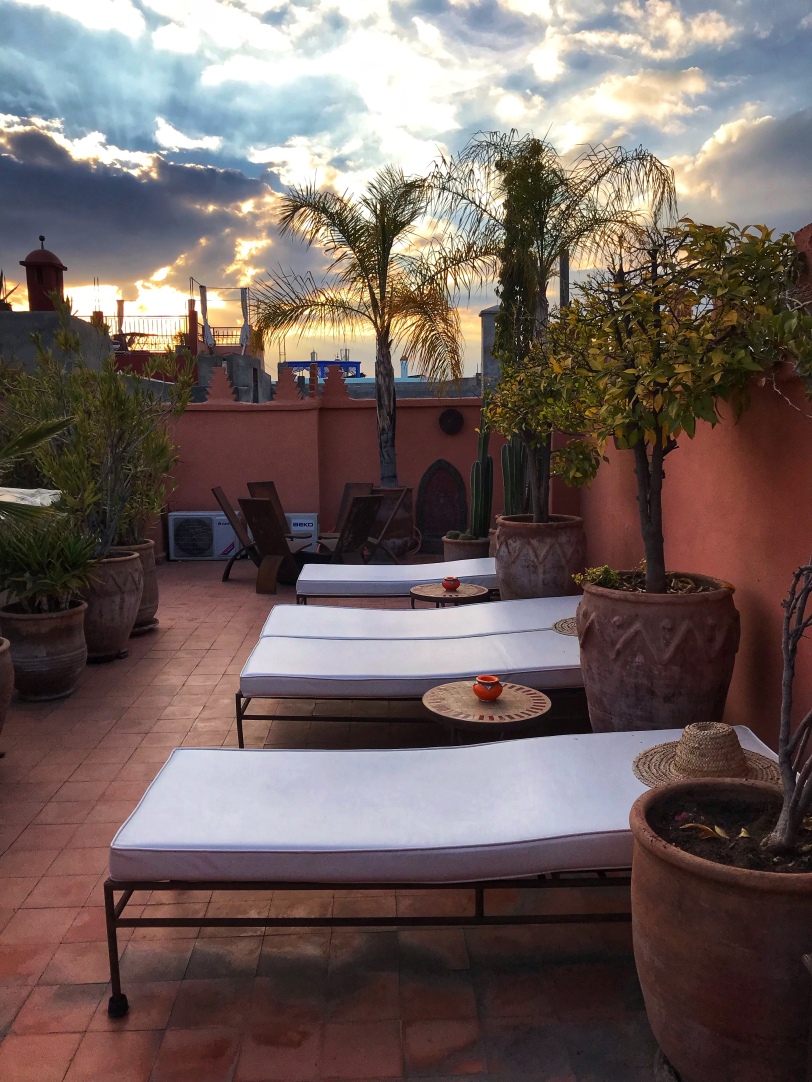 The roof of our riad – I wish we’d had more time to enjoy it. 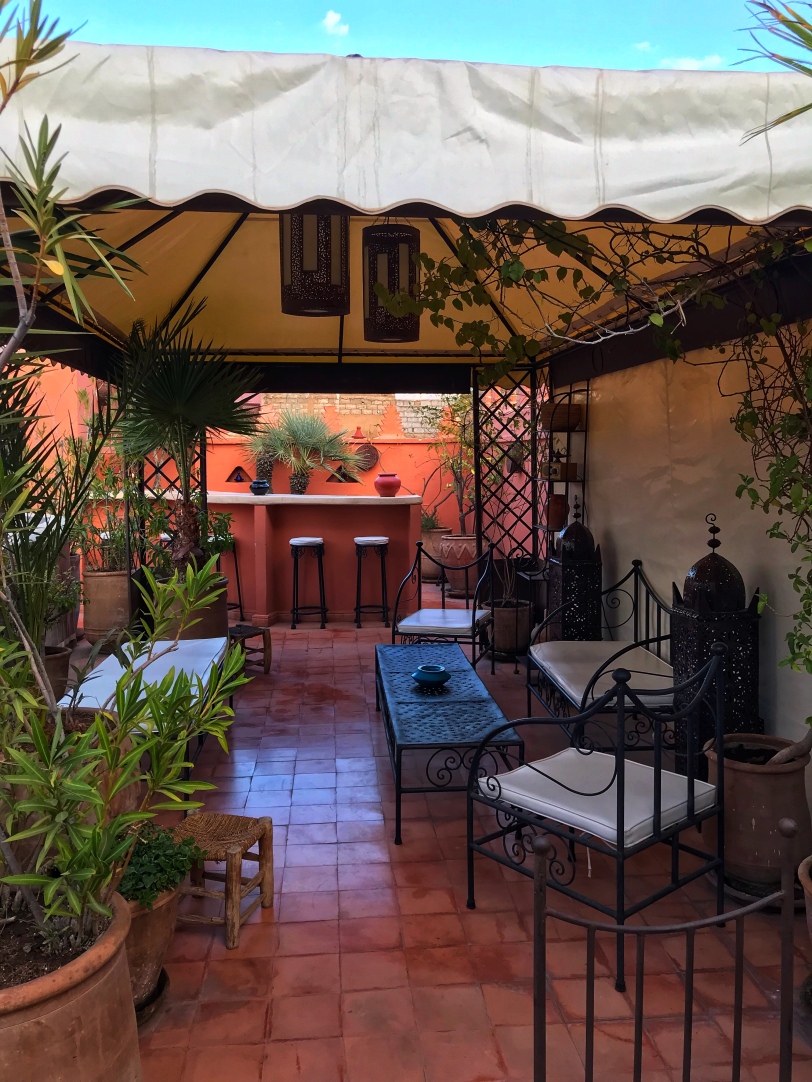 The afternoon cakes and mint tea. I HATE tea and yet couldn’t stop drinking it…it is delicious!

The flights and the hotel taken care of, it was time to come up with an itinerary. We had basically two full days and an evening to fill and the more reading up on Marrakech the more overwhelmed I became because there was SO MUCH I WANTED TO DO! Seriously, I had no idea there was so much in Marrakech – not just the Medina, but day trips to coastal cities, Casablanca, the Atlas Mountains, even the Sahara desert! (Which was not possible in this go-round). However, given the time, I wanted to make sure we gave Marrakech our full attention.

I booked a private night walking tour for the first night we arrived to acclimate us to the Medina. For our next full day, we had another private walking tour – this time to the more popular sites of Marrakech (not just inside the Medina), with a plan to spend the afternoon in a Moroccan Hamman (or spa). For our next full day, we were going to visit the famed Marjorelle Gardens followed by a camel ride before spending the afternoon shopping in the souks. It was a full schedule, but not too packed and allowed plenty of time for site-seeing without exhausting ourselves.

On approach to Marrakech

It was an easy trip from Stuttgart, but I was worried about what we would be facing at customs. I had read it could take hours to get through – but luckily, it was empty when we arrived and took less than 15 minutes to get through. I had also read that there were free SIM cards available right after customs, and sure enough – the stand was there. I paid 10E extra for 10GB of data, which turned out to be key! (Riads throughout the city are not known for good internet).

Our riad offered a free airport shuttle, and as soon as we walked out, we saw the sign for us. As we drove through the town to the Medina, I was surprised by how modern the town was, but as we learned later, the neighborhoods surrounding the Medina are the “new town,” built during the French colonization of Morocco. It has large shopping centers and clubs (and a Starbucks! Yes, I got a mug). It is completely opposite from what is inside the Medina’s walls.

The roads were crazy in the Medina – this is considered a road. Crazy!

The walk to our Riad.

The hotel shuttle had to drop us off at the entrance to the main square – Jemaa el-Fnaa because cars are only allowed inside at certain times. Luckily, our Riad was super close and the owner sent a cart to carry our luggage. As we walked through the crazy square, we saw the Berber monkeys and snake charmers. I had read beforehand that if they see you taking pictures they will approach you and demand money. I didn’t even want pictures though – the monkeys have chains around their necks and the snakes look crazy. It made me so sad for the monkeys and we just walked by without even really looking at them. I wanted no part of encouraging any of that.

While I had heard merchants were aggressive, it really wasn’t bad at all – I actually found it worse in Italy than in Morocco. Be careful of taking pictures in the square – especially as I said above, of the monkeys and snake charmers. Also, do not let the ladies in the square get ahold of your hand (and they will try), or they’ll start drawing henna on you and it will be cheap ink and expensive. We avoided all of those scams. 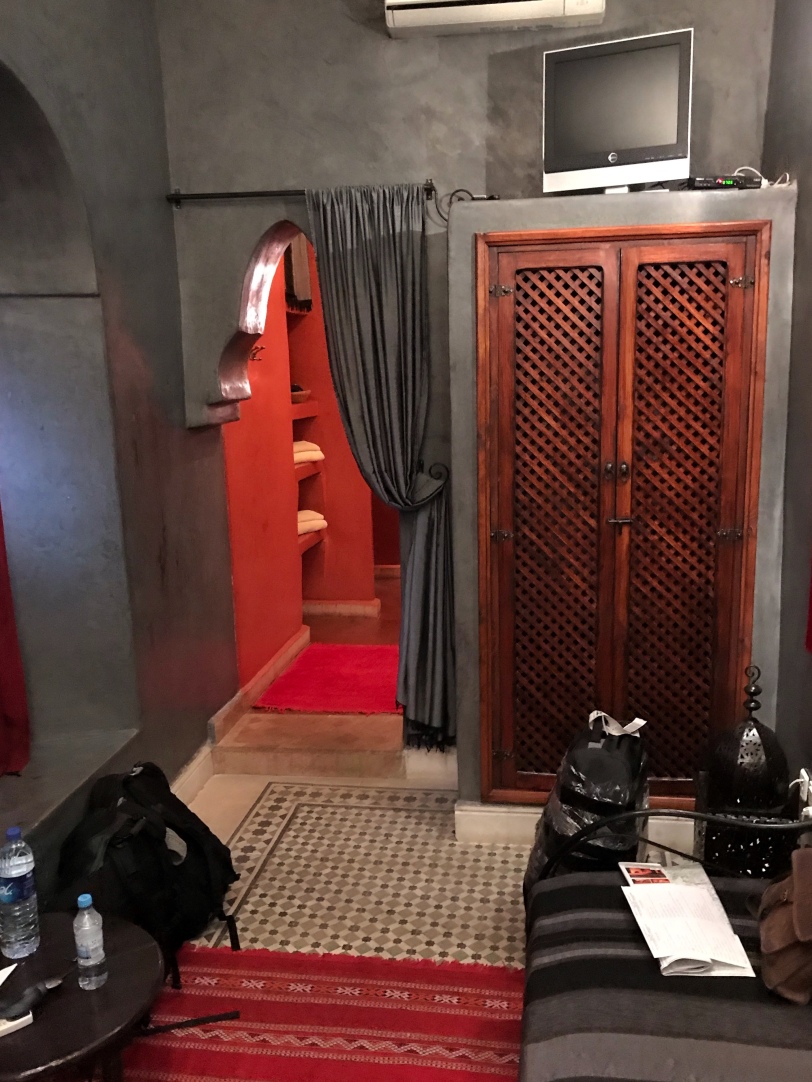 Our room in the Riad – unfortunately, it is normal for there not to be doors between the bathroom and room. Sigh. 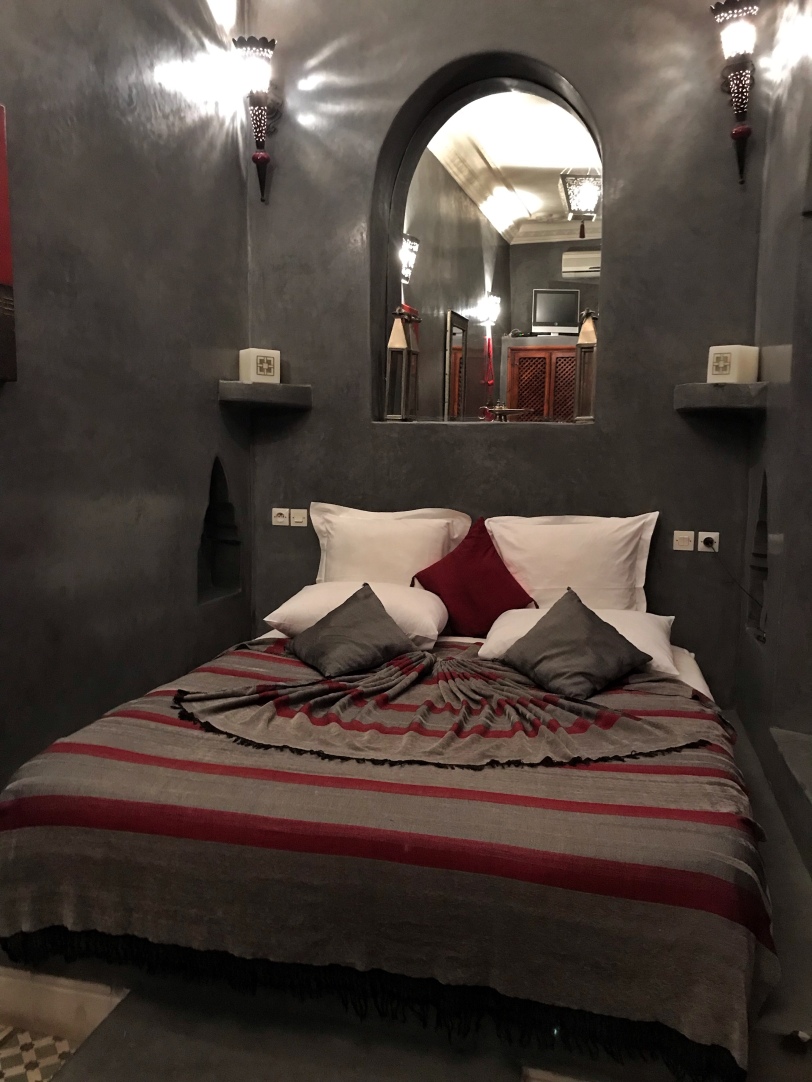 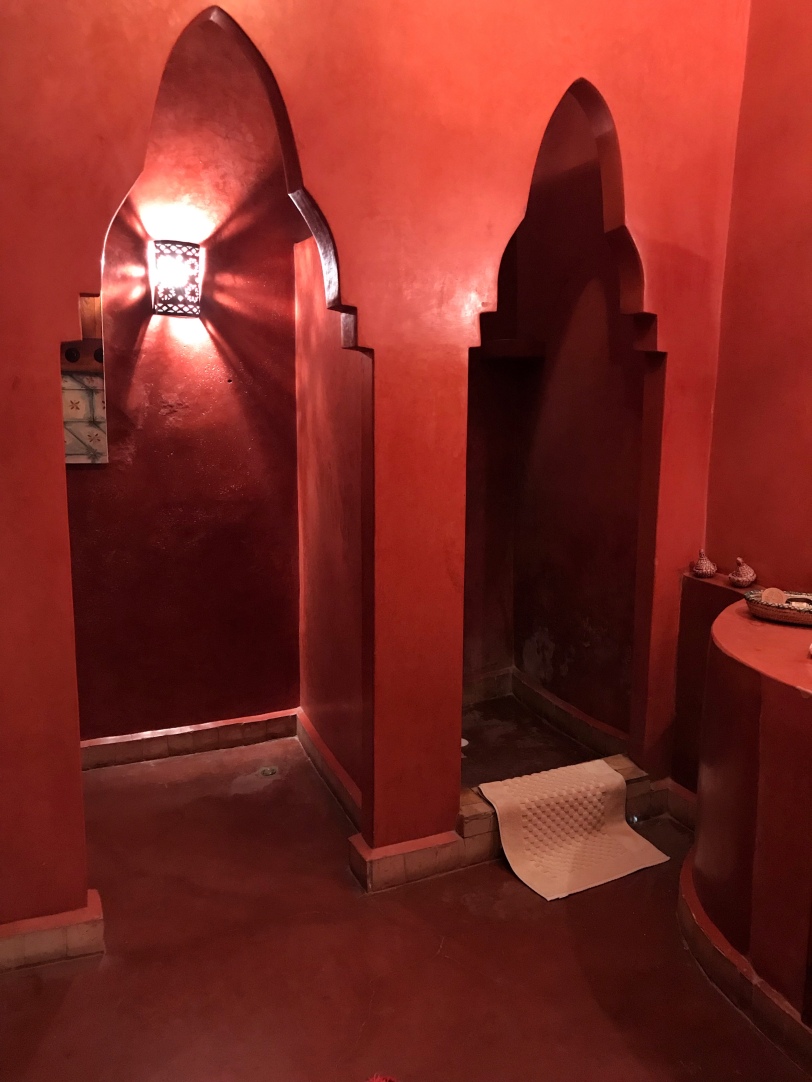 We had a little time to relax before heading to our first tour of the night, so we relaxed in the Riad, getting a great rundown of the city from our road’s owner. Guido was a French man who, with a friend, bought the Riad as a vacation home but instead decided to try their hand as hoteliers. I’m so glad they did – the services were really above and beyond. He booked us the Hammam treatments (I cancelled the one I originally had because the one he recommended was half the price), and offered to make restaurant reservations and even offered dinner at the Riad. He was fantastic. 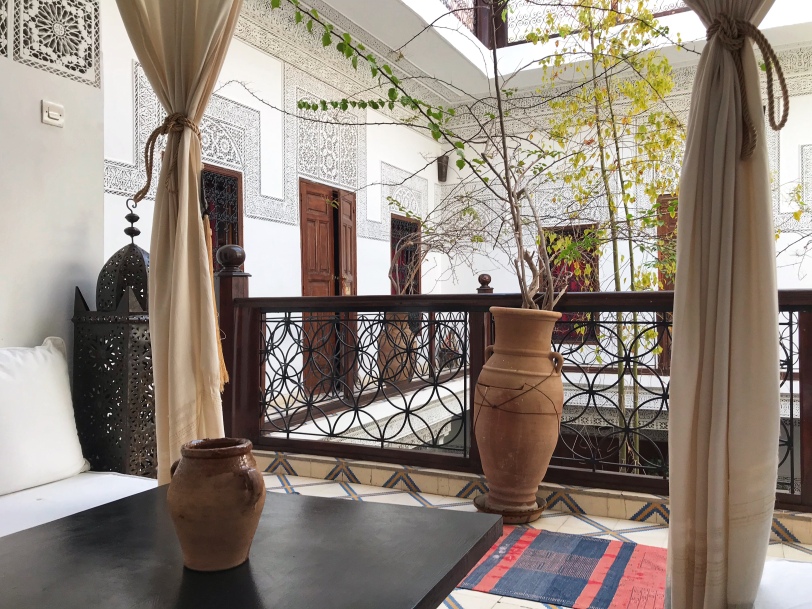 This little alcove was right outside our room (the door on the left), and I loved sitting here!

Next up: Our walking night tour of Marrakech!