Why the Champagne Region: I was NOT leaving Europe without drinking Champagne in the Champagne region of France. Anyone who knows me, knows I love the bubbly – so visiting there was a must. I knew John would have no interest in going with me, so I picked three days during the week (I was still working shift at the time, so I could do this without taking leave) and planned my trip.

Riding first class – first to Paris, then to Reims. Always buy first class…so worth it! 🙂

The Trip: This was the first overnight trip that I took by myself in Europe, so I was a little apprehensive but mostly excited. The plan was to base out of Reims, and then take side trips to Epernay and beyond. Here’s one thing I wish I had known – the towns aren’t really connected that well and it’s not super easy to make it between the Champagne houses on foot. I took the train to Paris, then hopped another to Reims, so I had no car. And I really could have used a car, because public transportation was lacking too. But on the plus side, it meant I could spend the day exploring Paris one last time, so it worked out…more on that later, though!

I arrived in Reims late afternoon, and after check-in, found a spot for lunch because I was starving!! I was so looking forward to being inundated with champagne at every turn – and while it is everywhere, I was a bit surprised to see the prices were about on par with drinking champagne anywhere else. No lowered prices here! 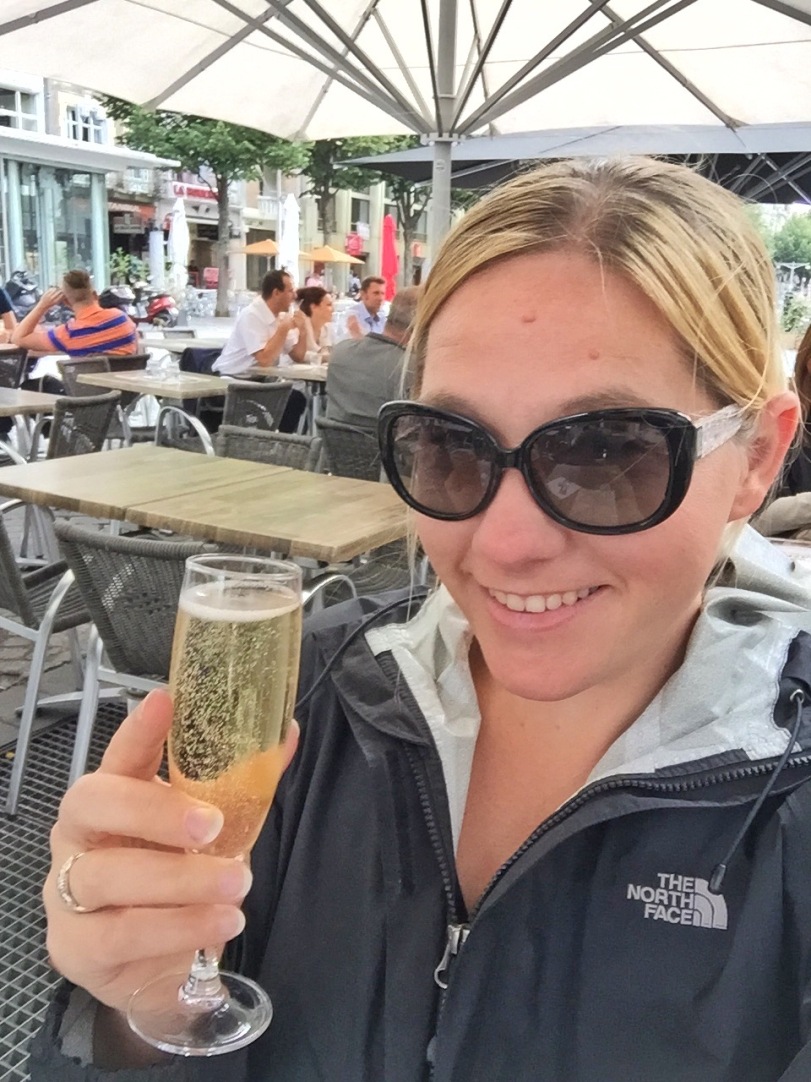 First glass of Champagne in the Champagne region!!

Only sparkling wine that comes from the Champagne region of France can legally be called Champagne (at least in Europe…but if it says Champagne and it’s from California, just know it’s just a generic term). However, about 2 hours south of Reims is the Alsace region, and they produce Cremant – which is Champagne, just made in a different area. It doesn’t have the title, but it has the taste and at a fraction of the cost! In Spain, it’s Cava and in Germany, it’s Sekt.

I had booked a tour at the Lanson Champagne House, one of the oldest in Reims and arguably not as popular as Mumm, Tattinger or Pommery, so I figured it wouldn’t be super packed. (Tip – all house tours need to be booked in advance otherwise, you probably won’t get in!) 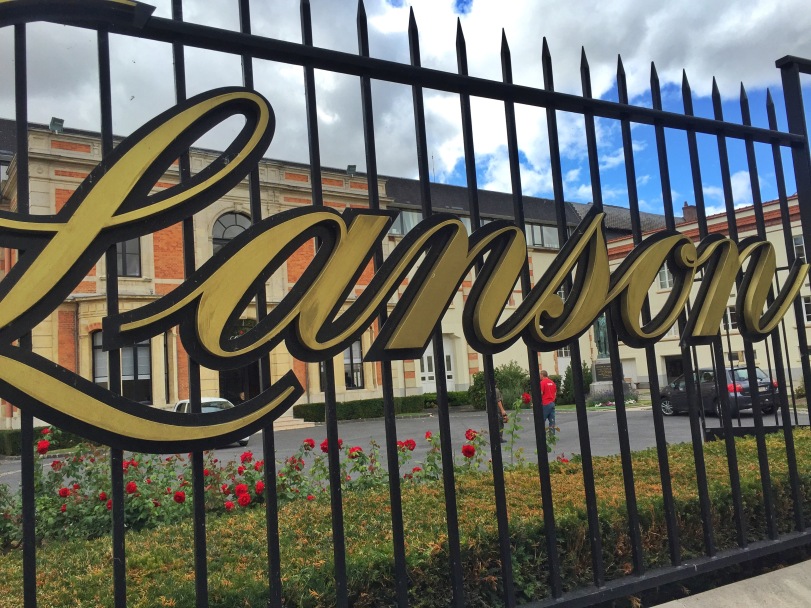 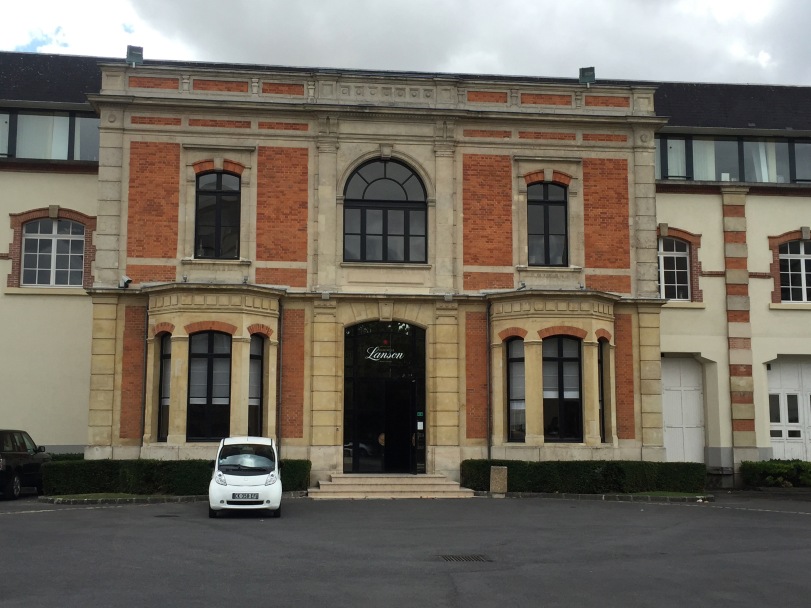 There are vineyards near the house, but most are outside of the city.

Look at all the vats of champagne! 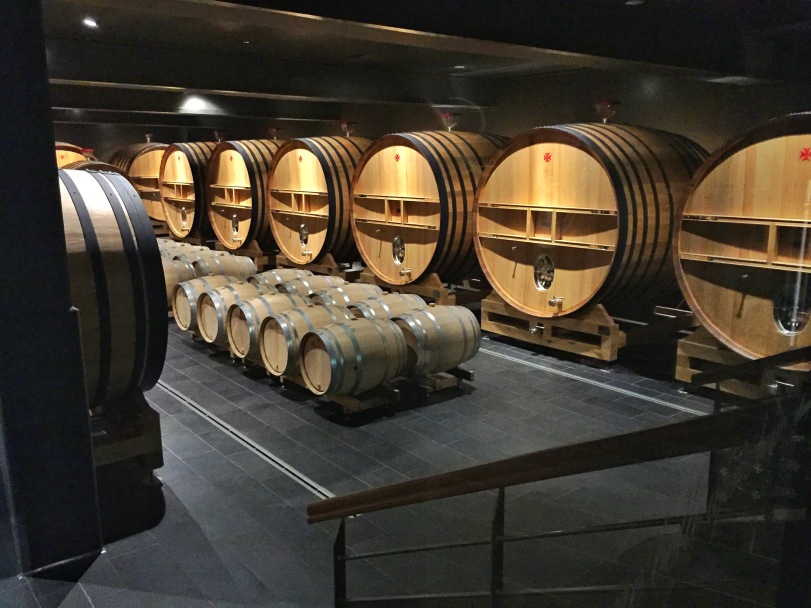 I want one of the in my basement!

I really enjoyed the tour, you start in the vineyards then make your way down to the cellars. I have never seen anything like it – the cellars were MASSIVE with rows and rows of Champagne. They also let us taste at the end, which I clearly enjoyed and picked up a few bottles for the road. Fun fact about Lanson – The Queen of England has put her mark on this champagne – and it is the only one served at her events! 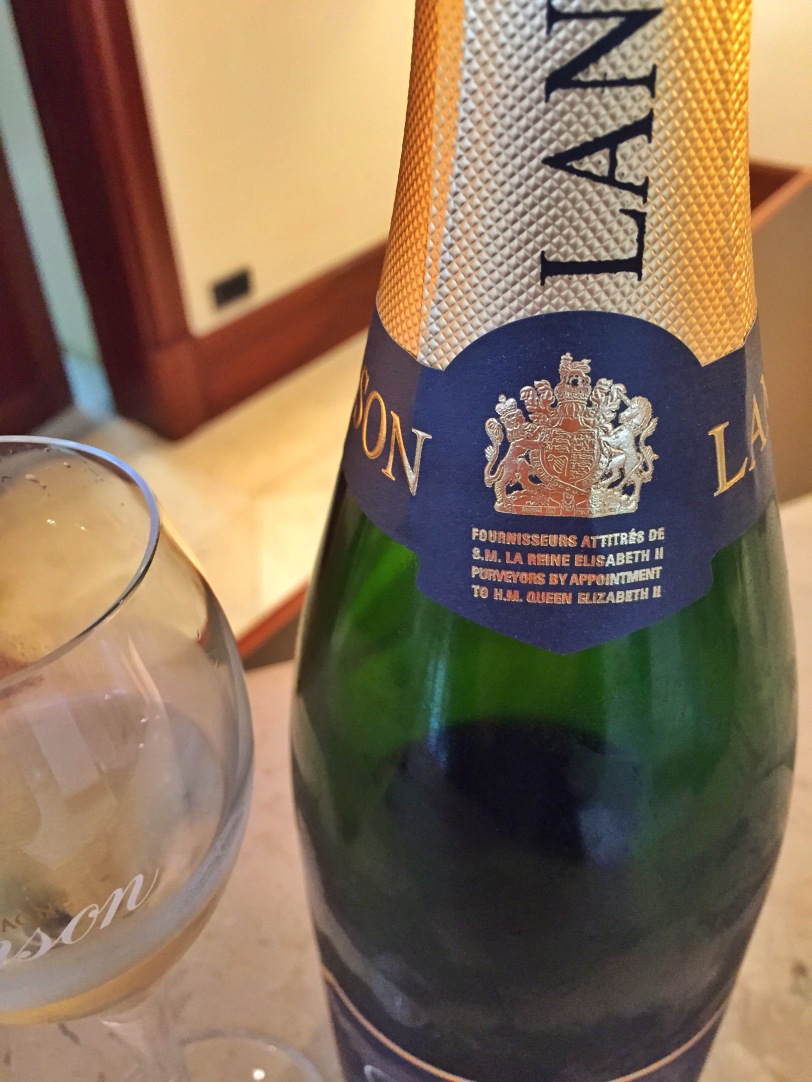 The Queen of England’s stamp of approval 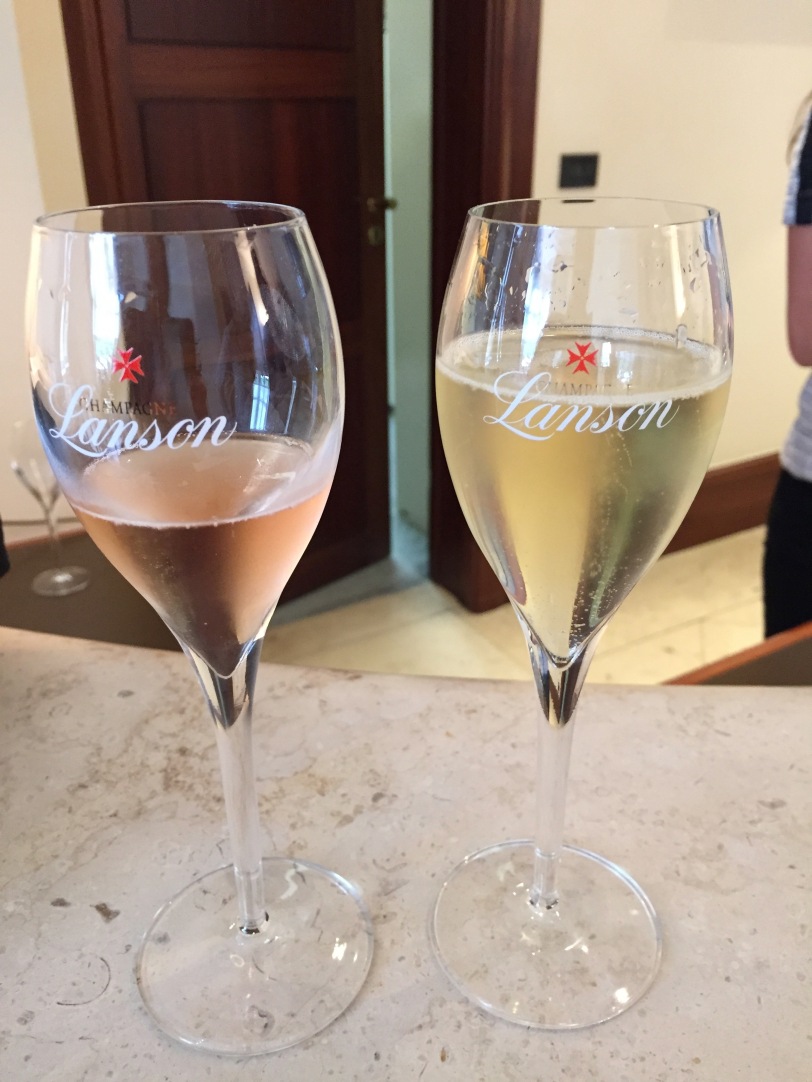 The two I took home with me!

While my objective was Champagne, there is also a TON of history in Reims, so I wanted to site-see about around the town. The Reims Cathedral – where centuries of French kings were knighted – is gorgeous. The town of Reims itself was eh. Not terrible, not amazing…good for a day but that’s about it.

Side view of the Reims Cathedral 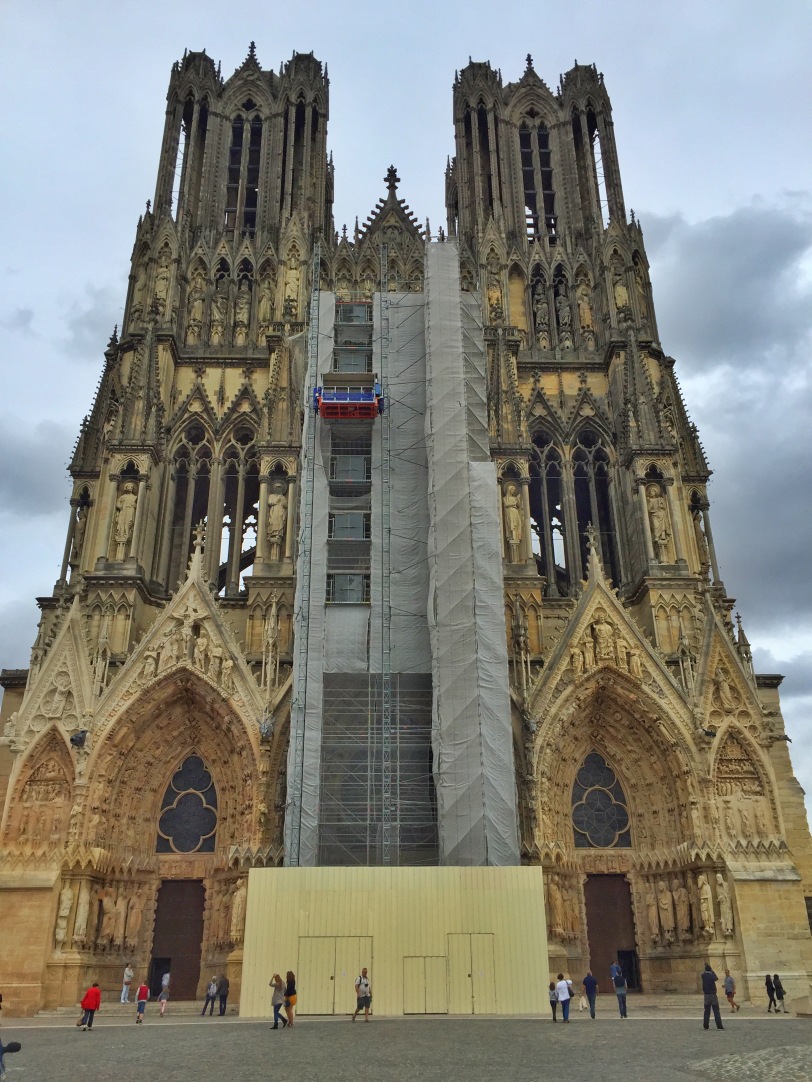 The next day, my plan was to train to Epernay to see the Avenue of Champagne…but, there’s no real direct train so I hopped a bus instead and made my way to my mecca. JI was super disappointed because the star of the avenue – Moet & Chandon – was shut down for renovations so a visit was a no go. Instead I just walked up and down the avenue, stopping and tasting in various houses.

Riding on the bus to Epernay 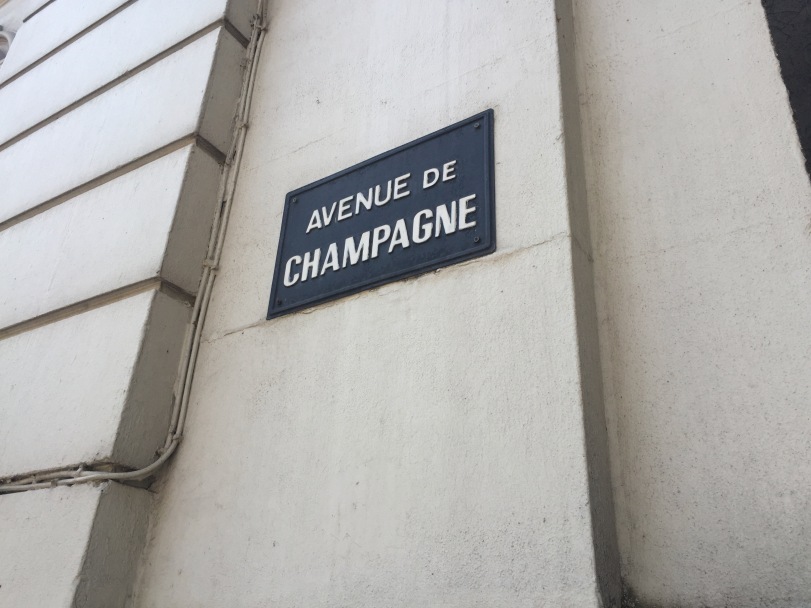 Super sad this was closed for renovation!

The Moet & Chandon grounds and store were open, though! Super pretty!

I went tasting in here instead of Moet.

I had the place to myself, so the girl poured me a few extra glasses! 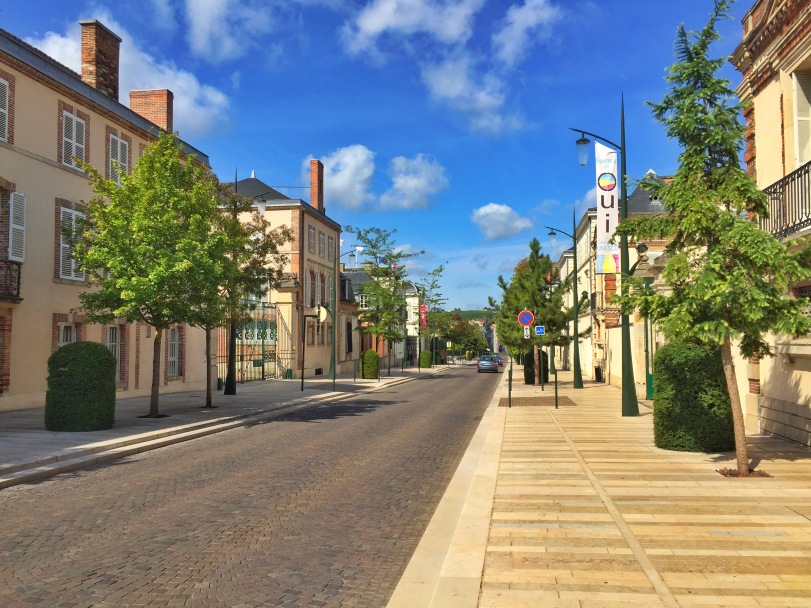 I walked a bit, but well…I was actually tired of Champagne!! I didn’t think it was possible, but it was time to head back to Reims…and I actually had red wine that night for dinner.

While at dinner, I decided that I’d seen and tasted all I had wanted to from that region and wouldn’t mind a little day trip to Paris. We were slated to moved back to the states about a month and half later, and I didn’t know when I’d be back to Paris. But I also wanted to see something new, so some google searching at dinner and a day trip was planned! (That’s another blog though).

When you need a break from Champagne, a good Cote du Rhone works!

Final Thoughts: If I had to do it again, I would have done it with a car and maybe one less full day. The houses are very cool, the champagne delicious and I am so happy I went. The rolling vineyards are super pretty and the towns each hold a lot of history. If you’re in Paris and have time to spare and love Champagne, make the hour train ride north.

I want one of these in my living room!

One thought on “Champagne Region, France”