The first time I had heard about Nove was from a co-worker whose wife had made him stop in this small little town northwest of Venice on their way back to Stuttgart. He said she spent about $500 on ceramics and dishes that would have cost more than $1500 had she bought the same pieces in the States! And we’re talking dishes and ceramics that are shipped from Italy to Tiffany, Williams-Sonoma, Crate & Barrel, etc. Say whhhaaatttt?? I was definitely interested and made sure I tucked this little piece of information away until I could get a chance to visit myself.

That chance came sooner rather than later when John was sent to Vicenza for a work conference this past weekend. Not only would we get a chance to visit Venice (40-min train ride from Vicenza) and Verona (25-min train ride) – I could do a little shopping as well!!

I was a bit nervous that Nove, only about 20 minutes from Vicenza by car, wouldn’t be as great as I heard about. That the ceramics wouldn’t be as good or that the prices weren’t as much of a bargain as we were told they were going to be. I’m so, so happy to report that it was just as awesome as I thought it would be! (And even though I don’t think John believed me about how cool this could possibly be, it turns out he picked up more items than I did!)

Our first stop was La Ceramica VBC, probably the most popular of all the ceramic stores in Nove. This place was amazing, and even though we went to multiple shops, we ended up back at this store and bought all but one of our items from the store!

The store was a two-story warehouse, with the work shop/shipping center taking up most of the bottom floor.

The first view of this impressive store – beautiful, colorful mosaics hand-painted in the store!

Rows of this colorful Fiesta Ware…we had a set picked out but figured we didn’t need it right now.

I had read on a few blogs about these adorable little Tiffany Piggy Banks…they were only 17E (about $23). Online, they sell for $125!!

I was going to get one of the piggy banks until I saw these elephants!! I didn’t buy one, but luckily I could change my mind and have John pick me up one as he is going to still be there the rest of the week! 🙂

I LOVED these Tiffany Baskets from their Weave collection! 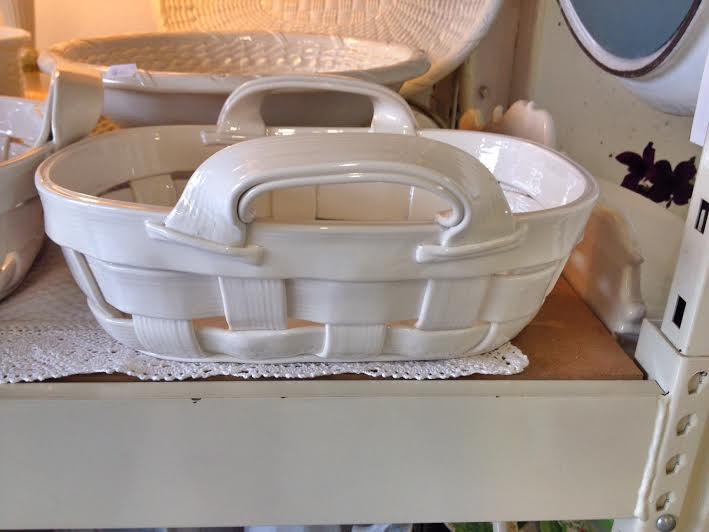 Clearly, I needed to buy one! 🙂

They had a whole set of Spaghetti dishes in this pattern. We had a set picked out, but settled for this Caprese dish for now! 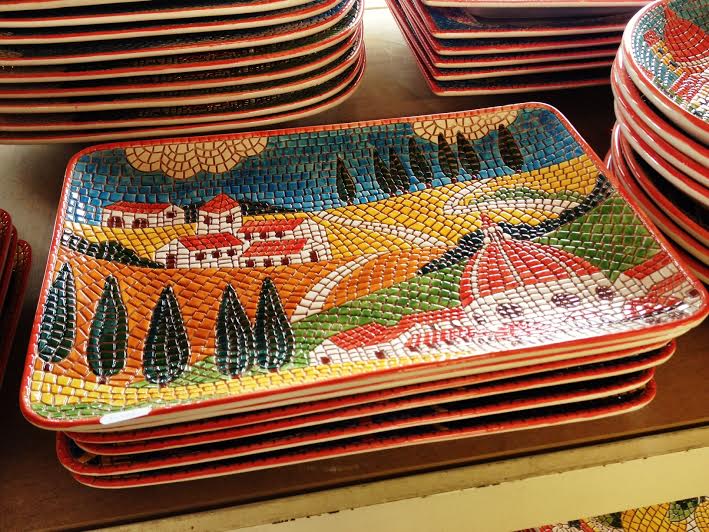 These mosaics were amazing! I picked up a few for a couple of Christmas gifts, and picked up a pitcher and hot plate for myself! 🙂

Just when you think you have made it to the end, there is more around the corner!

More of the workspaces on the second floor behind the main store area.

Back to the store room! And look at this – a Lenox dish set at a fraction of the price than what you would pay in the US.

If the Lenox isn’t your style, then maybe a little Williams-Sonoma is! I looked up this set online – there is no way we could possibly afford (or justify the cost of) this set at the online price! 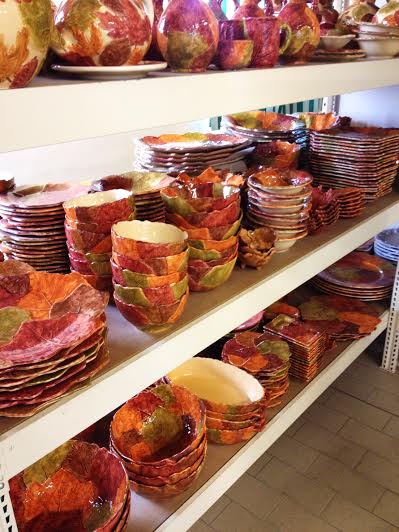 There were even sections to help out with Holiday decor!

We moved on to a couple of other stores before the lunch time, when all Italian stores take at least a 90-minute break and shut down before reopening in the afternoon. I had seen these adorable Honey Pots online that I knew John would really like, but they weren’t in the first couple of stores we went too…however, right before we took a break we found them!

The home of the adorable Honey Pots!

We had to wait for VBC to re-open after lunch, so we visited a couple of the other stores that didn’t close but none of them really came close to the selection at the first store. So armed with an idea of what we wanted, we made our way back to the store! Now came the hard part – deciding between what we wanted and what we really needed at the moment! 🙂 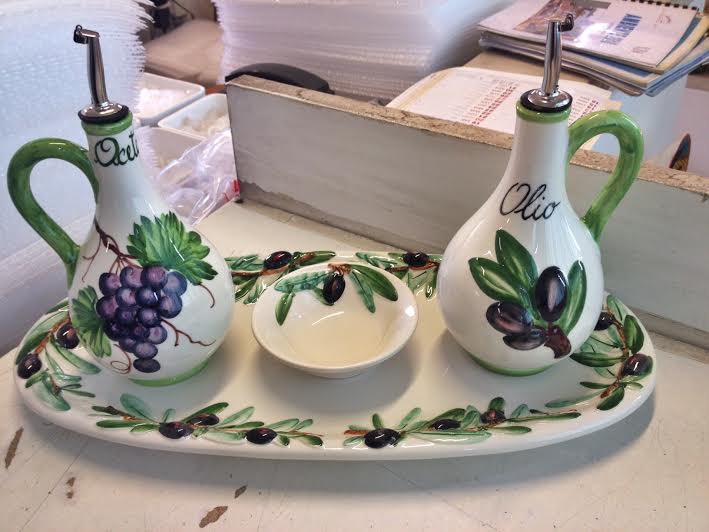 On top of the weaved Tiffany basket, the Caprese plate and the mosaics, we picked up this adorable Olive Oil set!

Finally, although not necessarily my style normally, I wanted one of these little chickens…so for 8E, it was mine! 🙂

The Chicken Pitchers can be found in all of the ceramic stores in Nove, and the origin of them date back to the  early Renaissance period in the Republic of Florence. There were two rival families in town, the Medici family and the Pazzi family. In 1478, one of the sons of the Medici family, Giuliano, threw a large party during which he and his guards consumed vast amounts of wine. While they slept, assassins hired by the Pazzi family tried to sneak across the yard to murder Giuliano and his guards. However, the assassin woke up the chickens in the yard who made such a fuss that they foiled the assassination plot. The assassins were caught and murdered, and Guiliano ordered the town artisans to to create ceramic copies of chickens to be used as wine pitchers. It is now an Italian tradition to give a chicken pitcher to friends and family as a symbol of good luck and to ward off evil from the home. I gifted one to John and me! 😉

A close-up look of the Mosaics. I grabbed one of the pitchers and plates for myself!

Things to know before you visit Nove:

John and I both agreed that we will probably be making a return trip before we leave Germany! It’s only about a six-hour drive from Stuttgart, and the bonus is that we will be able to make another stop in Venice! If you get the chance – a stop in Nove is HIGHLY recommended! Even if it is only to gawk! 🙂

One thought on “Spotlight On: Nove, Italy”