Where: Amsterdam, The Netherlands
When: April 2014
Hotel: The Golden Tulip
Why Amsterdam: We visited Amsterdam in late April when our good friends Jake and Renee were visiting from the States. Since they were visiting in prime Tulip blossoming time, a trip to Holland beat Prague, another top contender for where to go while they were here. I had been in Amsterdam for about three hours during a long layover over Christmas, but it was cold, rainy and I was exhausted after catching a 6 a.m. flight back to the states so I was excited about the opportunity to explore the city some more.

The Trip: The plan was to visit the famed Keukenhof Gardens and the outlying tulip fields (which rightfully deserves a blog post of its own!) before making our way to Amsterdam for a couple of days. We had all of the highlights on our itinerary – the Anne Frank House, the Van Gogh Museum, weekly markets. We were good to go.

Now, what arguably Amsterdam is most well-known for – pot and prostitutes – was likely going to be unavoidable, but neither experience made our initial itinerary. Our first night in town, we found ourselves heading into the heart of the downtown area and, after a yummy dinner at a small Italian place beside the main train station, quickly found ourselves in the Red Light District. 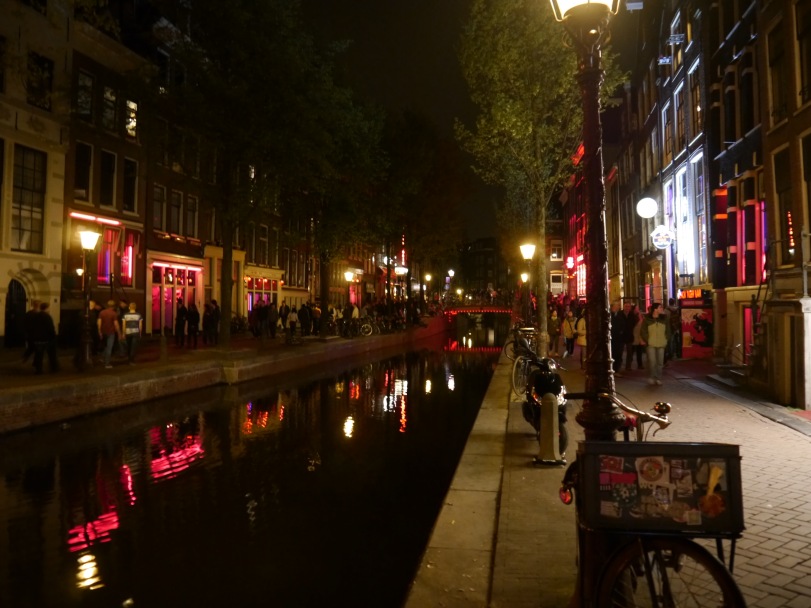 I can say with all certainty that I have NEVER seen anything like it. It’s like a contradiction of two worlds almost. The District is really in the downtown area – not on the outskirts but right off one of the main roads and it takes up several blocks. Not only that, it is lined with pretty canal homes and is spotted with the characteristic decorative bridges that you find throughout the city.

And then you look around street level, and there are the prostitutes. They stand like zoo animals in storefront doorways, each with their own private entrance leading back into what I assume is their work area. It was the most bizarre thing I have ever seen. In between the girls, were shops and theaters offering a variety of shows. We all opted against seeing a “show” but we did walk into one such shop. Two minutes later, we were back on the street, dousing ourselves with hand sanitizer and walking out of the District. As we walked back to the train station, we passed by many of the “coffee shops,” each with a strong odor emanating on to the streets. For future reference, in Amsterdam, you aren’t getting coffee in the coffee shops. Stick to the cafes instead, and if you really want to keep it safe – just go to Starbucks.

The working girls – I started to feel bad for them. They were more of an exhibit than anything. I couldn’t think of anything less demeaning.

We had booked our plans for day two in advance, which is highly recommended if you want to visit either the Anne Frank House or the Van Gogh Museum. And if you do plan on going to the Anne Frank House, make sure to buy your tickets even further in advance than normal. You have to pick what time you want to go and there are only so many times/tickets sold each day. By the time we realized this, the four of us had to tour the house 15 minutes apart! We opted to start at the Van Gogh (correct pronunciation – Gawck) prior to heading to the Anne Frank House. I highly recommend getting the Audio Guide to explain the different paintings and what he was going through during each period.

The line to get in to the Van Gogh museum…and it hadn’t even opened yet! Luckily, we could get in without the line!

We only had a short amount of time before we had to head over to the Anne Frank House. If you do get the chance, absolutely visit this museum. It is definitely a somber and sobering experience – maybe plan something upbeat afterwards – but it is also an amazing example of the lengths they went to survive the atrocities being committed by the Nazis. Like the Van Gogh, pictures are not allowed, but that’s a good thing in this case so that you aren’t so preoccupied with taking pictures that you miss the experience.

More lines, this time for Anne Frank. Although, honestly, I may have been more willing to stand in this line.

The outside of the Anne Frank House. It’s so amazing that they lived in the house for so long and weren’t detected. Whoever betrayed them is hopefully rotting somewhere.

The afternoon was pretty wide open – perfect for exploring the markets around Amsterdam. However! Regardless of what your guidebook says, SKIP the Albert Cuypmarkt. Both Renee and I had it as a recommended market, and neither of us were sure why! It is one giant flea market, and not even a good one! The only highlight of that was watching John and Jake try to choke down the herring that Amsterdam is known for (FYI – both of them looked a little green after!)

The Albert Cuypmarkt – colorful, but not much else!

The before picture…they turned away before we could get the after!

Like any of the other big cities we have visited, Amsterdam – although it looks close on a map – is quite spread out and can wear you out if you aren’t careful. Amsterdam adds in the treat of various canals that all look-alike and can get you turned around really easily.

A lot of the houses were crooked! I would feel lopsided all the time! They were pretty cool though!

The canals were very pretty! 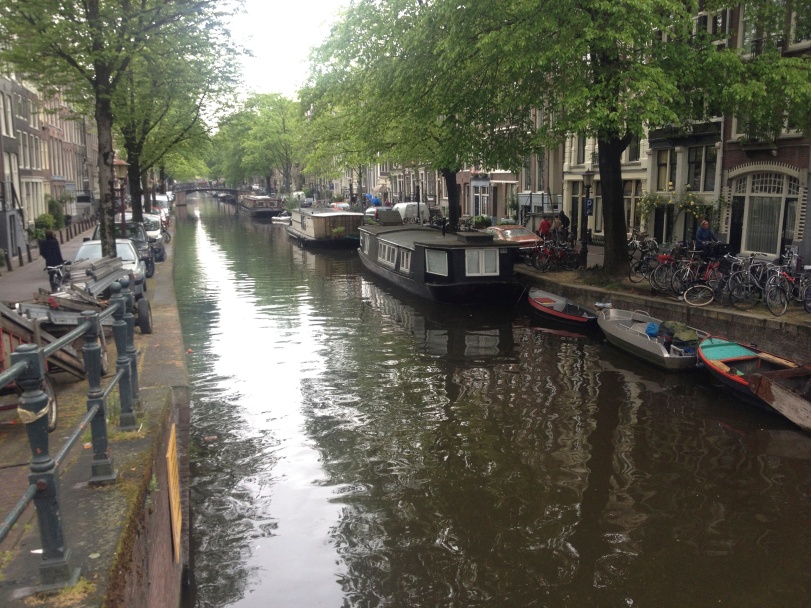 The houseboats – some were really cute, others needed a little work! 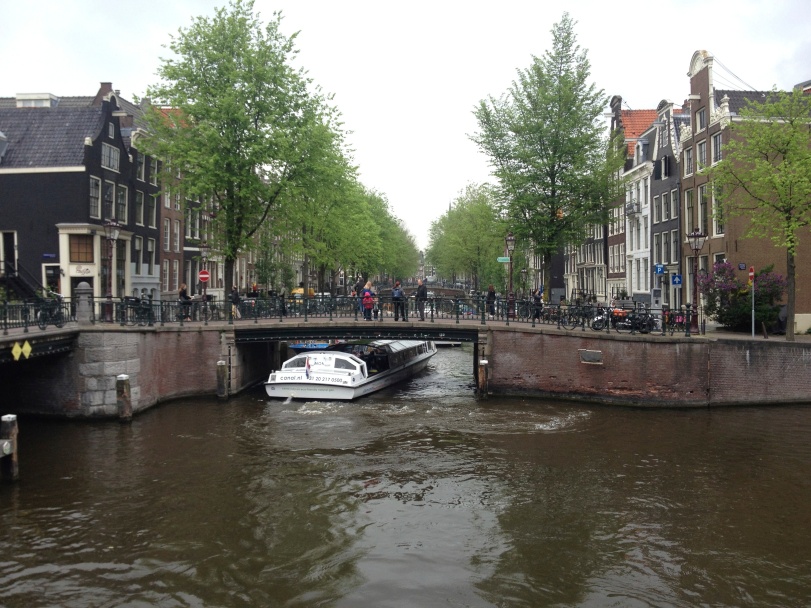 Watching the boats go under made me nervous every time!

Definitely need a photo op with the I Amsterdam sign!

We ended the day with a boat tour. John and I sat outside and really didn’t get any of the commentary – so it was pretty much another tour of the canals that we had been looking at all day. After awhile, if you have seen one – you have seen them all! It probably would have been more enjoyable if we had taken one after it got dark to see the town all lit up. But we were worn out already, and anything later would have probably completely exhausted us! 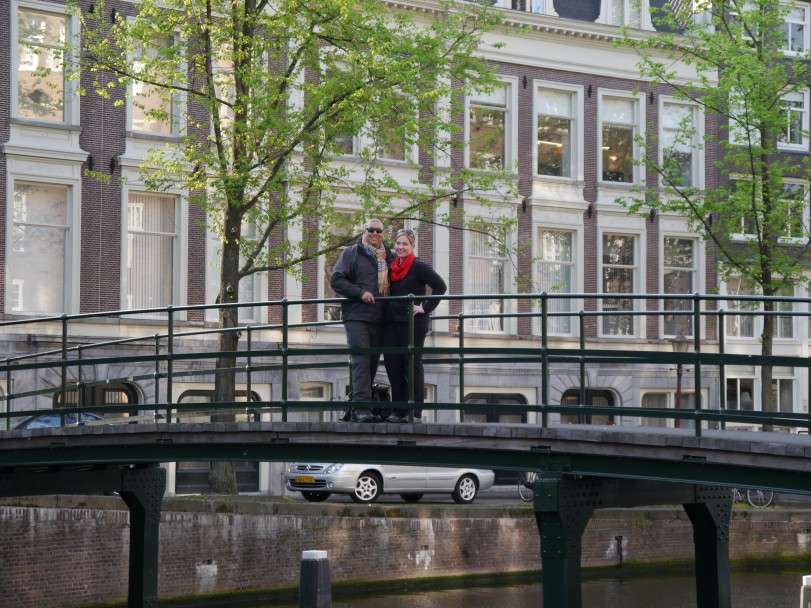 Johnny and me on one of the 400 bridges in the city!

Final Impressions: Here’s the thing – I wanted to like Amsterdam, but it is probably pulling up the rear in places that I have visited. If I were a 20-year-old frat dude into pot and prostitutes, this would be the ideal place to be. But sadly, even though I KNOW there is a lot of culture hiding underneath the seedier side, it’s hard to get past it. I really, really enjoyed the Anne Frank and Van Gogh museums and strolling the canals was really fun. But eventually, the canals become a bit monotonous and the shock/awe of what you can get away with that would be illegal in the States gets a bit old. I’m glad we only opted to spend one full day there, because it may have gotten really boring. Amsterdam doesn’t make the list of places I want to see again, but  it was worth a trip at least once. Now the tulip fields, that’s another story entirely! J