Where: Chania, Crete (Greece)
When: May 2014
Hotel: Archontiki Hotel
Why Crete: Quite honestly, it was mainly because the price was right! 😉 RyanAir was having a deal, and in exploring our options for a Memorial Day getaway, there was no passing up the inexpensive plane tickets to Crete! Both John and I had reservations about ever visiting Greece, at least in the near future, because of all of the recent economic issues that helped the mainland become a bit unstable. But Crete, being the southern-most island in Europe, and far away from the mainland, seemed like it would be okay to visit.

Clearly, this trip was going to be a good one when it included flying over the Swiss Alps and being treated with this view!

The Trip: Crete is the largest of all the Greek Islands, and is steep in ancient history. It was the center of the Minoan civilization, and is home to Knossos Palace, which is regarded as Europe’s first city. The capital of Crete is Heraklion, which is where you will find Knossos Palace, but we flew into Chania, an impossibly adorable town about two hours west. After visiting both, I’m so glad we made Chania our base – it was just so fun and beautiful and charming. The only real plan I had made for this trip was a road trip to see Knossos, but other than that, everything was pretty much in the air.

We arrived into Chania pretty late in the evening, and while the taxi would have been quite expensive, we opted to wait for the bus to take us into town. Luckily, our hotel was about a five-minute walk to the bus station, so we had no problems getting to our hotel. (One clue that Crete was going to be a fairly inexpensive place to visit should have been that we paid $220 for three nights at our hotel, which included breakfast and a two-room suite with a huge balcony overlooking the harbor. It was awesome!) 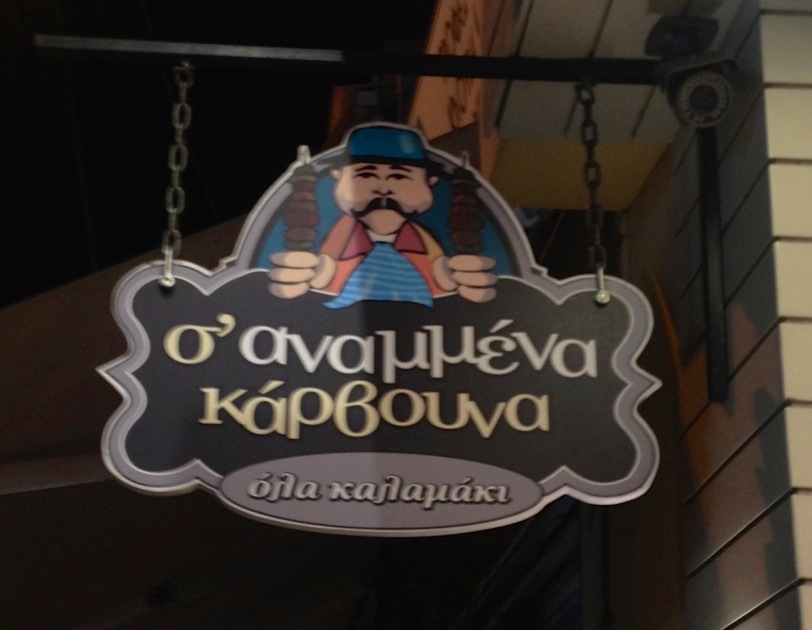 This was our first stop, even though it was after midnight. Our concierge had suggested it, and it was so good, we ate here every day. 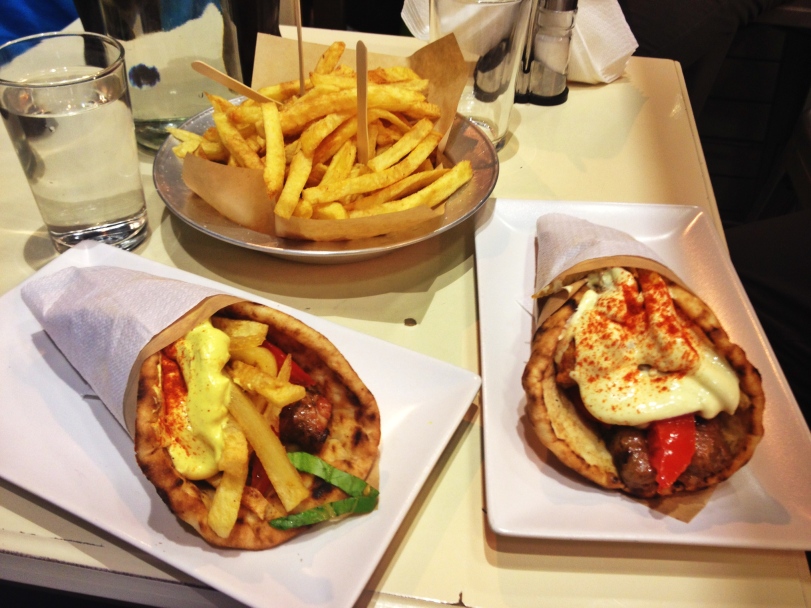 I can’t begin to tell you how good this was…and the cost? Depending on whether or not we got sodas, the total would be between 7-9 euros for us both.

Our first morning, we woke up and decided to head toward the old Venetian harbor, which was only about a five-minute walk from our hotel. We quickly got sidetracked by the endless rows of pedestrian-only side streets lined with markets selling pretty much everything and anything you could want. Neither of us are big shoppers on vacation but it quickly became apparent that we were going to spend a lot of time browsing the shops. We couldn’t help ourselves – the prices were so inexpensive for what you would get!

Our first view of Chania from our balcony!

What else would you expect from a Greek hotel, but to serve bread and olive oil, with feta and olives for breakfast? 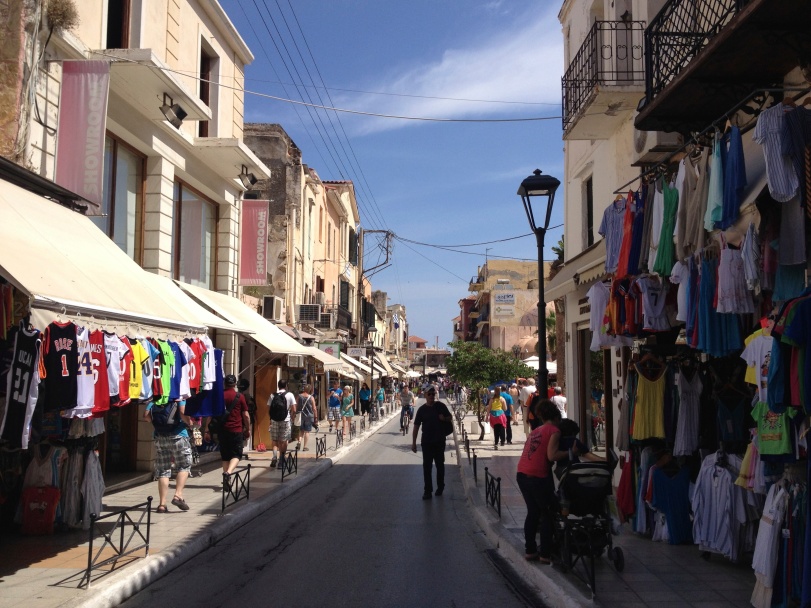 Walking down to the harbor on the main street. There were endless side streets of various shops.

One of the side streets – there were all so cute too! I could have wandered around them all day! 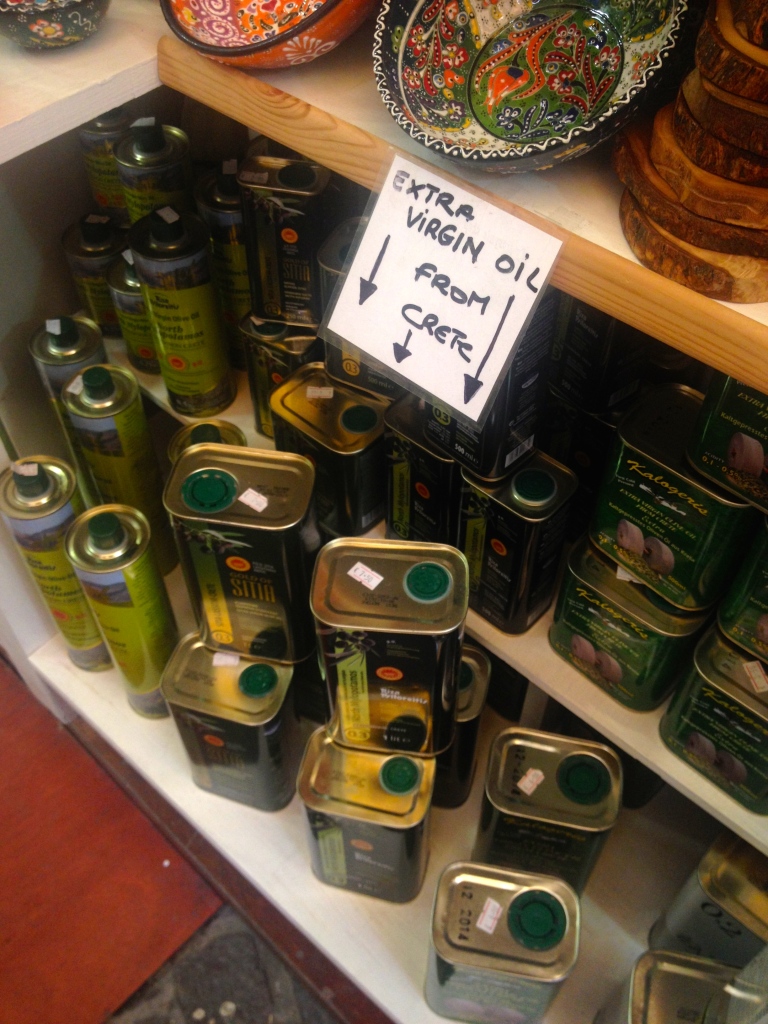 Olive Oil is one of the main products Crete is known for, so clearly we had to pick up a large container!

I adored the pottery and had a hard time picking out a piece. Luckily John helped, and one of these definitely made it back with us!

After browsing, we quickly decided to check out the harbor before getting down to some serious shopping.

The old Venetian Harbor. The colors were so bright and the water was ridiculously clear! 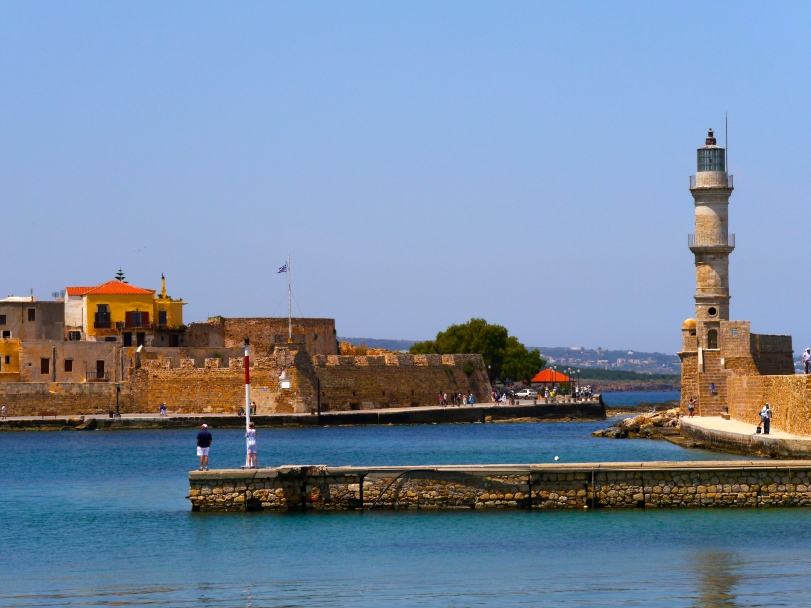 The entrance into the harbor, highlighted by the Venetian lighthouse, one of the oldest in the world!

John and I by the harbor (with our hats, bought from one of the markets!) 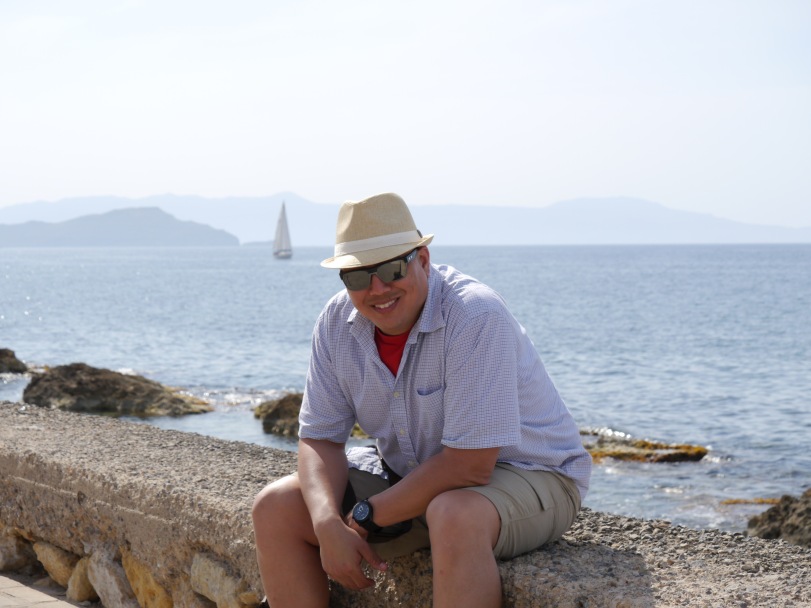 John by the harbor.

In our wandering, we found a hill you could walk up for really pretty views of the town.

Johnny and me on the overlook.

Loved all the different buildings and colors on all of the streets!

One of the activities we really enjoy are the night cruises in the various towns we go to, but to be honest, it didn’t even occur to me that one would be offered in Chania (duh!) There are a handful to choose from, but we opted for the 10E ride on a sailboat that would take us out to watch the sunset. Totally worth it, especially as it included fresh fruit and shots of Raki – the drink of choice in Crete. Plus, it was so nice to sit and relax after our day of walking and shopping.

Cheers! Shots of Raki while watching the sunset on the boat! 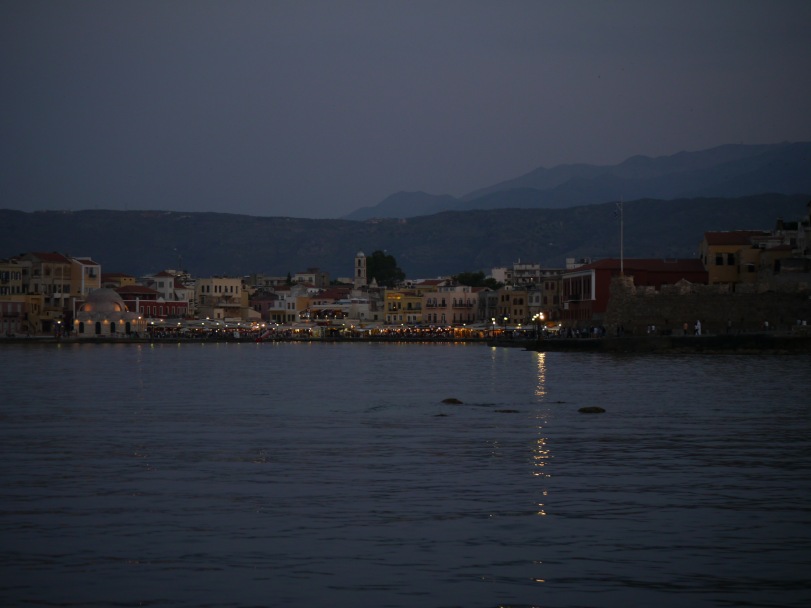 Pulling back into the active harbor!

Instead of paying tourist prices at the waterfront restaurants, John and I stopped at a convenient store to enjoy some pre-dinner beverages by the water. Much more cost-effective and we still got to enjoy the harbor! 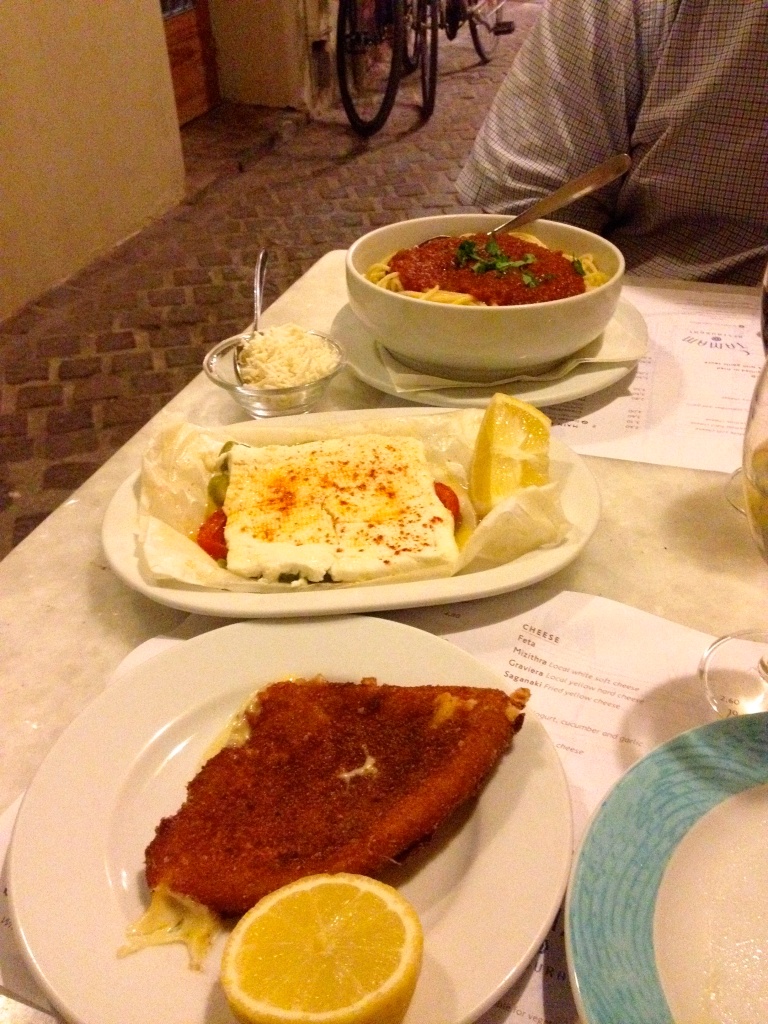 Our dinner that night at Taman, a restaurant recommended by many that didn’t disappoint. It was in one of the cute Alleys and only came to 20E total.

The next day, we were up and heading on our road trip to Knossos. I had booked a car through Avis for the day, but when we showed up the line was ridiculously long. As we had already gotten a late start, waiting would’ve really cut into our time. Instead, I noticed this other rental car company, with no line and the clerk just hanging out in front. I went over and asked him how much for the day. He said 40E, and that included insurance. It was probably the easiest car rental ever. I gave him 40E cash, he wrote down my license info, and he told us just to return the car with as much gas as we started. A little suspect, maybe, but it turned out fine and cheaper than what Avis would have been. Not to mention faster! 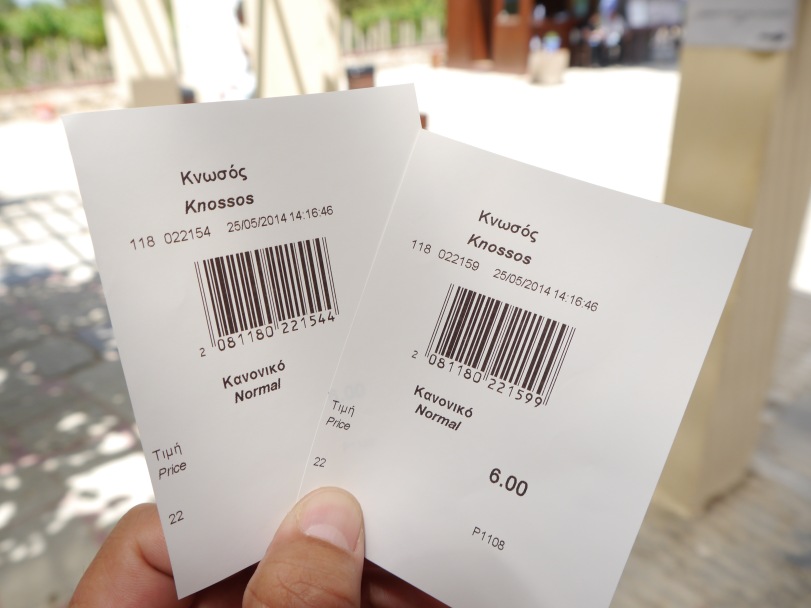 John had studied the frescoes at Knossos in his Art History class in college, so it was cool to get to visit this place.

We have this one on a magnet hanging on our fridge!

This place was crazy big – and impressive when you think that this was the place where civilization as we know it began.

The drive was fairly easy – although Greek drivers are CRAZY! The road may seem like one lane, but if someone wants to pass, you have to basically get on the side of the road. So the lanes are more of suggestions than anything. Luckily, we made it there and back safe. The drive itself was really gorgeous, so it really made the time go by quickly.

We stopped to get a picture of this town built on a hill. Now that would be the view to have!

It was our last night, so we just spent time wandering around some more and stumbled on another new experience. We had seen these “fish pedicure” places once before in Prague, but it just seemed weird to try – this time however, John decided to give it a try! 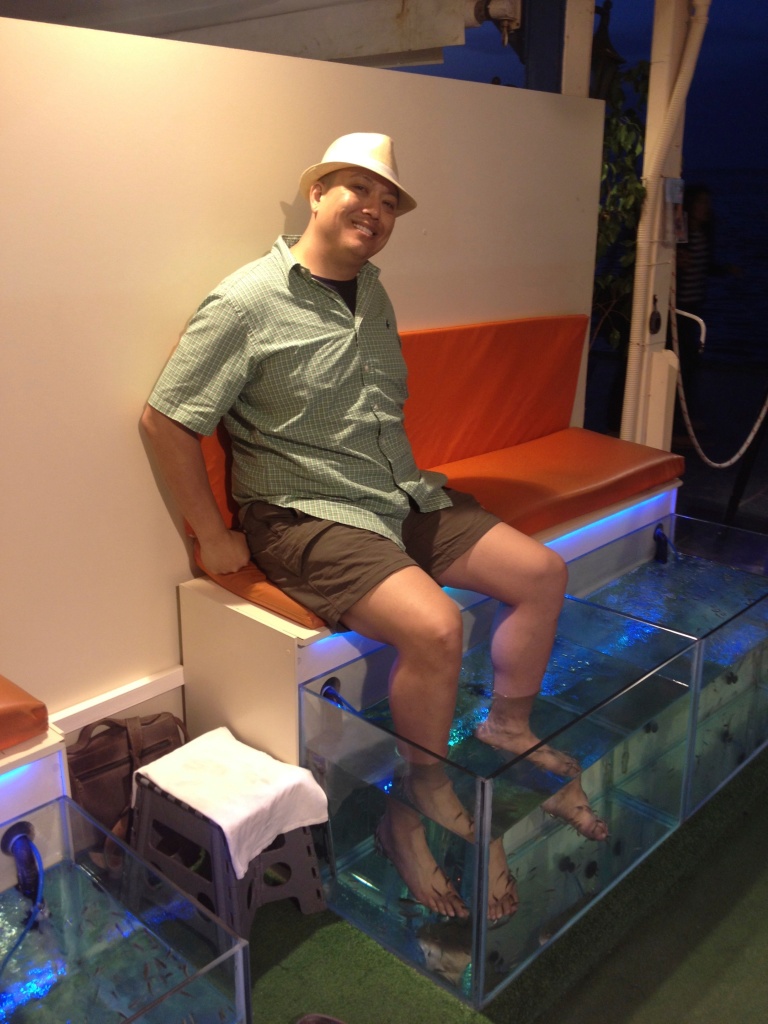 John getting his Garra Rufa Fish Pedicure…I was having none of it. I am way too ticklish! 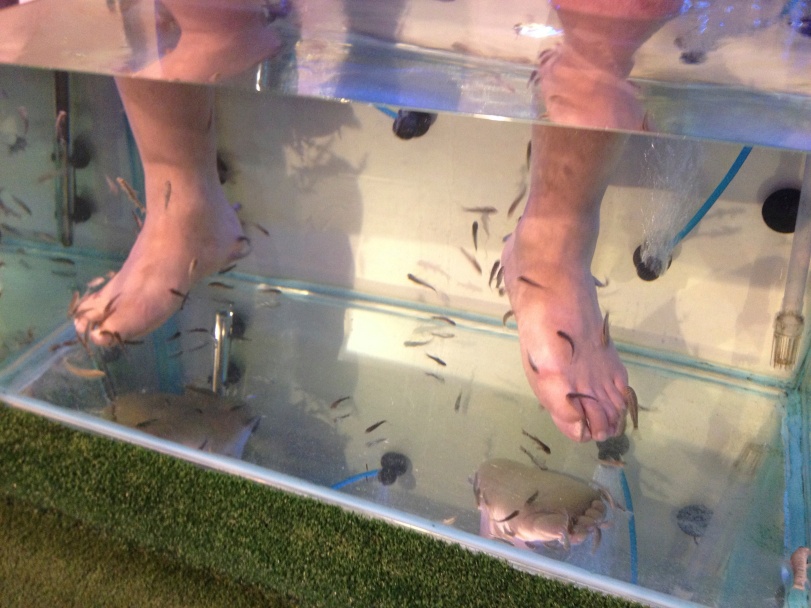 They just eat the dead skin off…I stuck my hand in to see what it was like…I could only take it about a second, but John really enjoyed it!

Somehow, the next morning, I woke up early enough to watch the Crete sunrise. It was just as pretty as the sunsets and the perfect way to end our trip!

The Crete sunrise, just as pretty as the sunset!

Final Impressions: I don’t think neither John nor I expected to like Crete as much as we did, and we really only saw a small portion of it. Both of us agreed that this makes the list of one of the places we want to get back to before we leave Germany. There is still much of the island we didn’t see (and more goods that we didn’t buy, but probably will next time!) While maybe not quite as popular among the Greek isles as Santorini or Mykonos, I’m so glad this was our introductory island. It was one of my favorite trips and I am definitely looking forward to going back again!