When I left Georgia last February, it was 75 degrees and sunny. When I landed in Germany, it was mid-20s and snowing. It had been 10 years since I lived somewhere with snow, but as the following days, weeks and months showed me, that was just the first of many adjustments I would have to make!

It would be an understatement to say that there are differences between the German culture and the American culture. The longer I am over here, however, the more I appreciate a few of the unwritten (and some written) rules that the German folks abide by.

I can’t possibly capture all of the differences in one post, so here are the ones that stand out:

I will NEVER forget the first time I saw a dog (or hund!) in a restaurant here in Germany! It was Valentine’s Day and I was treating myself to a solo meal at a German restaurant around the corner from base. I had just sat down when something caught my eye – a very, VERY large dog laying at the foot of a table across the restaurant from me. He (or she) was completely asleep, oblivious to the noise around him and all I could think about was our English Bulldog Caesar, who would have been a nightmare in that restaurant! It would have been stimulus overload for Caesar, who I could only imagine running from table to table, slobbering on anyone who would give him attention. But in Germany? Hunds are family, and so bringing them into restaurants, stores and malls are completely acceptable. And I have yet to see one in a store barking or being an overall mess. It’s slightly amazing!

Yes, that is a dog – on an escalator, in a very nice mall!

Germans are wonderfully into not being wasteful, which is absolutely fantastic when you are at one of the millions of festivals and realize the reason you are eating off of a glass plate and drinking out of a real cup is because in Germany it is a law not to use the plastic stuff to avoid the trash afterwards. Great stuff. There are three, at least, different garbage bins in which to recycle your cans and cardboard boxes – which is also great. However, the time it is not so great is when you have a loaded down basket of groceries only to discover that they won’t be asking if you want paper or plastic. They’ll look at you like you are not very smart and give you the option to (again!) buy a grocery bag. I’ve taken to keeping at least a couple in my trunk for that reason. But it still happens when I am cramming stuff into my purse and lugging an armful of goods out to the car!

Nothing screams American like being caught without your grocery bags!

No matter what else is served at breakfast, you can always count on tiny packets of nutella for the freshly baked breads. More often or not, the hotels I have stayed at offer some version of Nutella. The hotel in Prague even had a Nutella container permanently affixed to the wall. I’ve never had so much Nutella in my life. Thankfully, it is almost always followed by miles and miles of walking and site-seeing! 🙂

4. …And for that matter, let’s just go ahead and say Chocolate everywhere!

German chocolate, Belgium Chocolate, Swiss Chocolate – it’s everywhere you turn! And it’s cheap! And it’s delicious! The Ritter Sport chocolate? That’s the expensive chocolate in the States that costs upwards of $3! Here, it’s maybe a $1! And those pricey Lindt chocolates you always pass by? Yeah, there is an OUTLET store here for those. After a while, you’re like – I must step away from the chocolate. But it’s such a novelty that it takes awhile to get to that point! 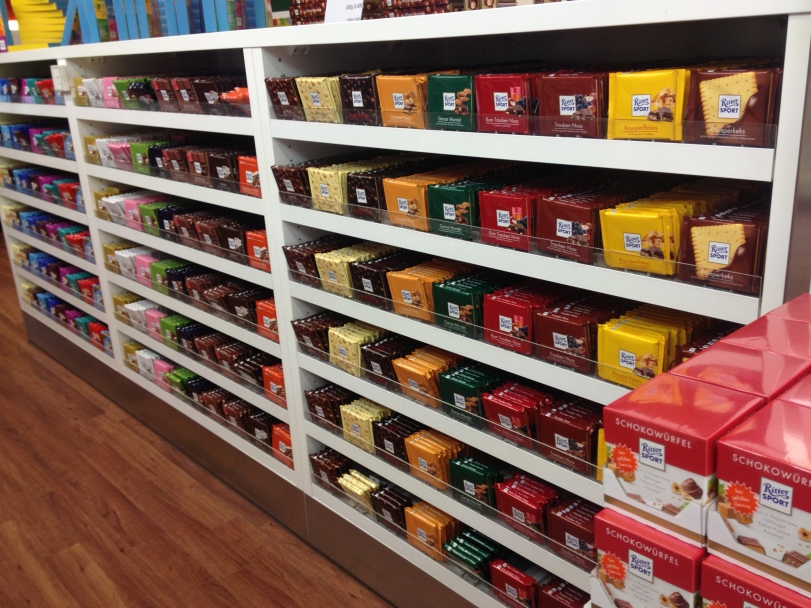 Okay, here is where the healthy side of Germans and the not-so-healthy side get a bit confused. And really, Europeans in general for that matter. Nearly everyone here still smokes! It’s like the no-smoking craze that swept the States did not find its way across the Atlantic – no, smoking is not allowed in restaurants here, but bars? Yes. Biergartens, of course. And if you are walking down one of the pedestrian walkways you are very likely to get caught behind someone who is smoking. It’s almost shocking when you first get over here because smoking just isn’t that mainstream in the States anymore like it is here. Now, I’ve gotten used to it – but everyone who first gets here or who has visited has noted the amount of smoking!

At least the smokers do abide by the smoking zones! That’s one positive!

If you want anything on a Sunday in Germany and don’t have access to a military base, you are sadly out of luck. Nothing, and I mean nothing, is open on Sundays. Not the Walmart-like stores, not the touristy shops and not even all gas stations (although you might get lucky with one or two here). Germans are very serious about resting on Sunday, so only a select few restaurants are open and even then you may be out of luck. The morale of the story – get everything done on Saturday or it will be a sad Sunday! 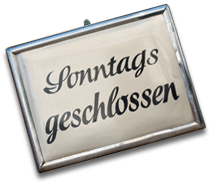 Very common signs advertising that they are closed on Sundays!

A great way to show you are so very NOT German? Cross the street when you still have a red light. If there are other people around they will look at you like you have committed the ultimate foul and will shake their head as they cross the street on the green light like you are supposed to – rules are rules here and crossing the street at the appropriate time is one of those rules!

These are what the crosswalk signs look like in Berlin – a throwback more to the communist era of East Berlin. He is the Ampelmänn!

8. Toll for the Toiletten!

It sounds incredibly silly – but one of the things I miss the most about the States is the ease in which you can find a public bathroom. Of course, the never-ending string of fast food restaurants makes it convienent, and the many stops on the side of the highway don’t hurt either, but even in town a bathroom isn’t far away. Not so much the case here in Germany. There are very few fast food restaurants (seriously, McDonald’s, Burger King and KFC are your only options), and even those are few and far between. The rest stops on the side of the road? Better have euro coins because it is going to cost you! Usually no more than 50 cent Euro, but it’s not an usual to come across an “expensive” one where you’ll pay a Euro ($1.33!) just to use the bathroom. Yes, they are nice and clean but nothing beats the free use of using a restroom!

This one in downtown Stuttgart cost 50 cent Euro. At least it was hosed down between uses!

9. How much for water? And what is this bubbly stuff?

There are a couple of things you will learn quickly when it comes to water over here: 1. It’s cheaper to order a beer or wine than it is to order water and 2. If you don’t specify that you want it “ohne gas,” it will be mineral water – which I find so disgusting! It makes picking out water bottles in a convenience store take just a little longer because you don’t want to mess up and not grab the still water because there is nothing more disappointing than opening the bottle and finding it to be fizzy! So, the morale of the story is, when in doubt, order a wine or beer! 🙂 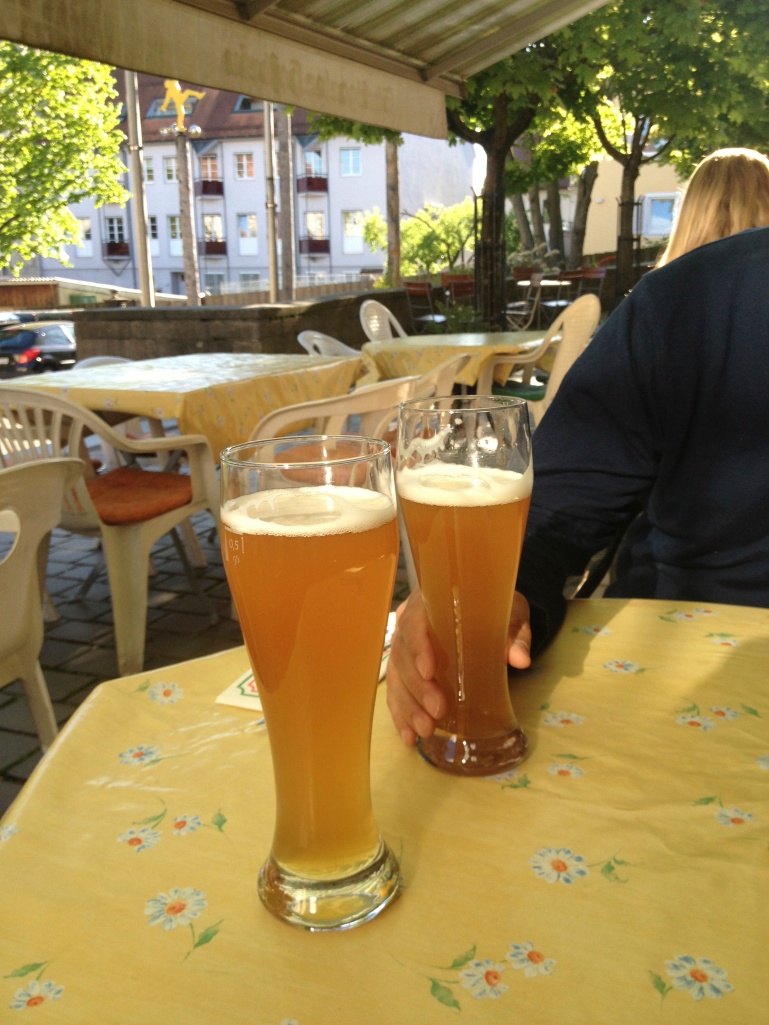 10. Pizza in the States is ruined for me forever

No, seriously. I don’t know how I am ever going to eat it and feel happy about it again. Go ahead and add ice cream to that list as well – no matter what it is or what they call it, it won’t be Gelato. In Germany, your choices of food in restaurants are fairly limited to German restaurants, Italian restaurants and donor kebab stands. In Stuttgart, there is a large number of folks from Italy that have settled in and opened up “Eis Cafes” or other Italian restaurants. And the pizza is amazing. And cheap – I’m talking, I pay 10E at my favorite Eis Cafe here and I get a “Rot Wein” or house red, a “personal size” pizza and a salad. The pizza alone is 5E, and it is wonderful. I don’t know how I will be able to eat Pizza Hut again.

The pizza at my favorite place, Eis Cafe Roma. The owners are from Sicily. I wonder what I will have to do to get them to come back to the states with me.

11. No worrying about hogging the covers in hotels!

The hotels over here understand that sometimes, blankets don’t get shared very often – so they came up with a rather handy solution. Each bed gets it’s own blanket, although it’s not so much a blanket as what feels like a lightweight pillow. And even then, it is not so lightweight because it always keeps you very warm. Until, that is, your husband kicks off his in the middle of the night and tries to take yours! 🙂 We asked once about separate vs full bed blankets and only got an odd look. So we just go with it now! 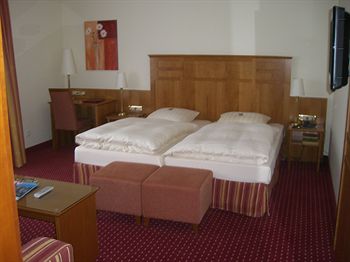 No more pulling at the blankets here!

12. Wonderful service but no tip for you!

Note to all travelers to Germany – when in a restaurant, simply round up to the nearest Euro, or leave no tip at all. They will give you a funny look and think to themselves what a silly American to be throwing away your money like this. The wait staff here gets paid a salary, and therefore it is not necessary to leave a tip. Or, if they did an exceptional job and you really feel the need to leave something – round up. It’s really, really hard to get used to leaving a little or nothing and not feeling like a huge jerk, but that is just the norm. However, it changes in each European country, so better to check each time you go to one!

13. There’s a festival for any and every occasion!

I’ve already covered how much I adore the festivals here – and I truly will be sad to leave them behind. They are a great way to pass an afternoon or to plan a trip around!

If you provide a reason, Germany will provide a festival!

Yes, back to food. Again. Because I haven’t talked yet about the bakeries here – and they are amazing. They aren’t like the bakeries in the States where you walk in and have instant cavaties. There are no cupcake shops here. These are bakeries opened daily where you can get any kind of bread you could possibly want, croissants, cinnamon rolls, etc, etc, etc. And they are fresh and wonderful and taste great with a cappucino. All for 2,20E. (It’s a wonder my skinny jeans still fit – this is where the outdoor trails and never-ending site-seeing comes in very handy!) 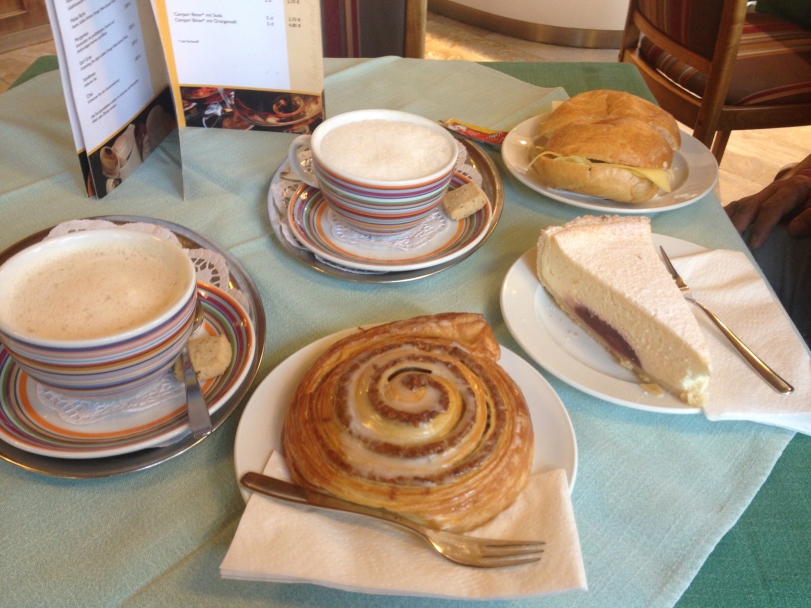 Yes, it really is as good as it looks!

At least once during the week and always on a Saturday, there is a market to buy your fresh veggies and flowers and fruits and whatever else you could want. I love wandering through these markets, even if it is just to pick up a bouquet of flowers. We’re very lucky in Stuttgart in that there is also a covered market that is open daily with an array of choices. 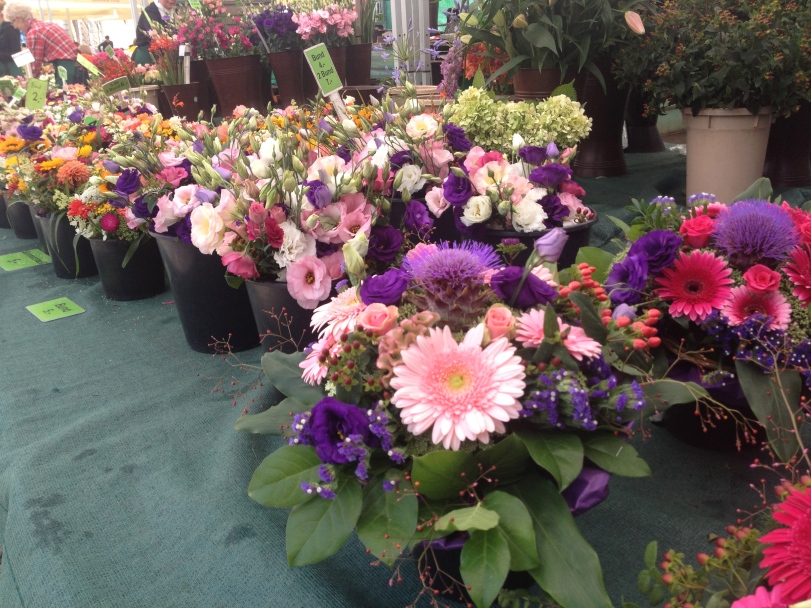 The indoor market in Stuttgart!

I could go on, but I’ll save the rest for another day. It’s been wonderful living in Germany and learning the culture and experiencing the seasons…even the cold, snowy winter! 🙂