Where: A stop to see Glendalough in the Wicklow Mountains before spending the night in Kilkenny
When: May 2013, part of our 10-day trip around Ireland
Hotel: In Kilkenny, we stayed at the Pembroke Hotel
Why Glendalough and Kilkenny: Just for reference – it’s pronounced GlendaLOCK, and it was on the course we had mapped for our way around Ireland and was on the way to Kilkenny, so it seemed like a natural stop. As for Kilkenny, there was the Smithwick’s tour that had made one of our “must-see” lists (a list made each of the four of us traveling to make where to go and what to see easier!), as well as a pretty cathedral – neither of which exactly worked out, but the deviation in no way hindered the trip. Kilkenny was the perfect stop if for nothing else to get a little sleep after two no-sleep nights in Dublin. Kilkenny was a pretty little town, and Glendalough was one of the prettiest places I think saw!

The Trip:  We set out early from Dublin on our way to our two destinations for Day 3. I had never been to a country where they drove on the opposite side of the road so it was definitely a new experience! And not an entirely comfortable one – I was confused and I wasn’t even driving! Thankfully, the boys took the driving duties while Renee and I enjoyed the pretty Irish scenery. 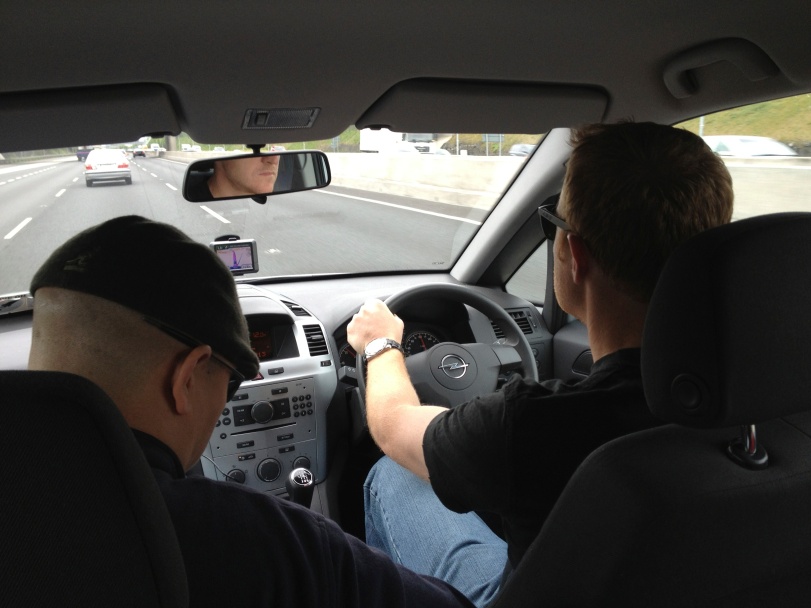 Thinking ahead, Renee and I booked a manual car (which neither of us drives) so that we could enjoy the ride while the boys drove. It worked out – that whole other side of the road thing looked confusing!

I have to admit – I wasn’t quite sure what to expect when we started driving. In my head, I thought Ireland was a mostly flat country with a few rolling hills here and there. And green – lots and lots of green. What I didn’t expect was the landscape we saw which changed often from mountains to flatlands and everything in between. It was more beautiful than I imagined! 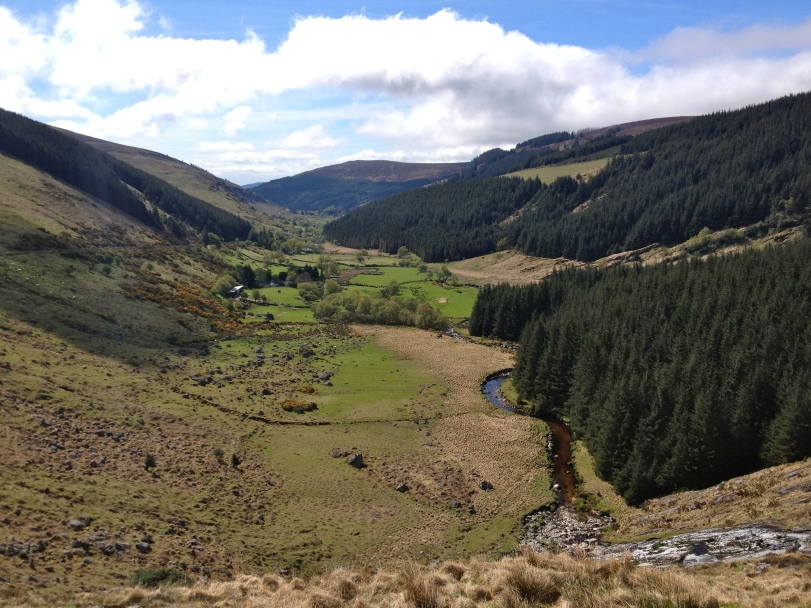 The picture doesn’t do this valley justice – it was gorgeous! 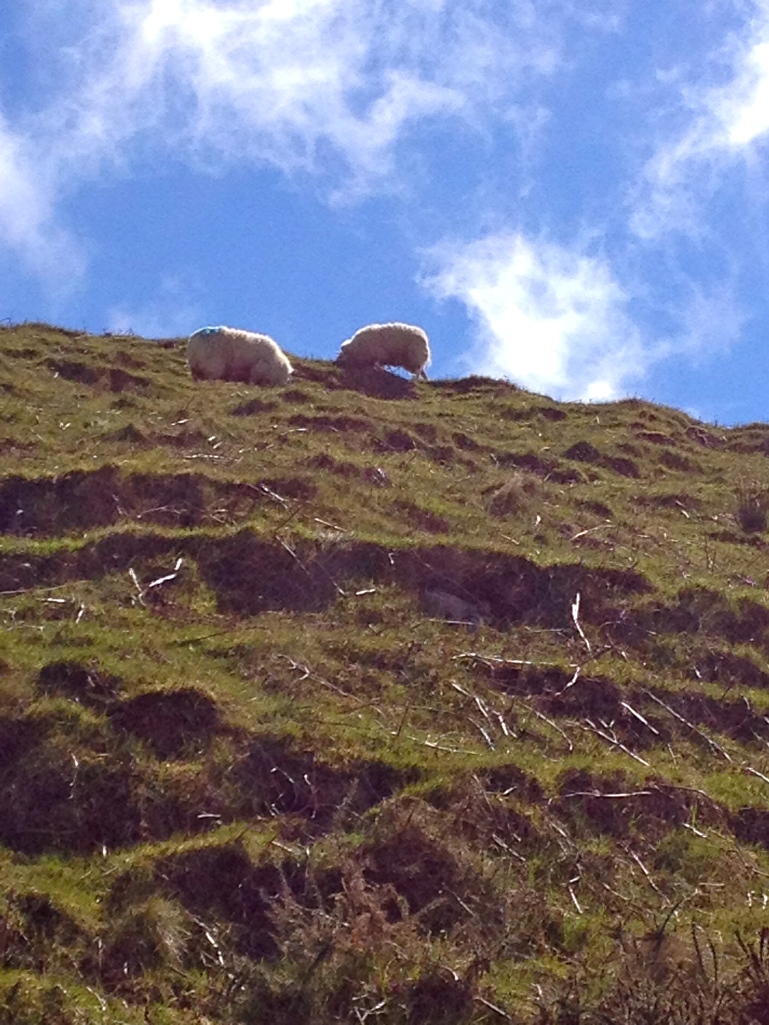 Yes – there are sheep everywhere. But sadly, I never saw the scene you so often see in the movies when you can’t drive because the sheep are crossing the road!

Our first stop was Glendalough, which is a glacial valley in County Wicklow, best known for its monastic settlement that was founded in the 6th century. I remember walking up and thinking how incredibly beautiful it all was – the monastic ruins set beside the large Wicklow Mountains and surrounded by a beautiful valley. It was breathtaking, one of my favorite spots on the trip. 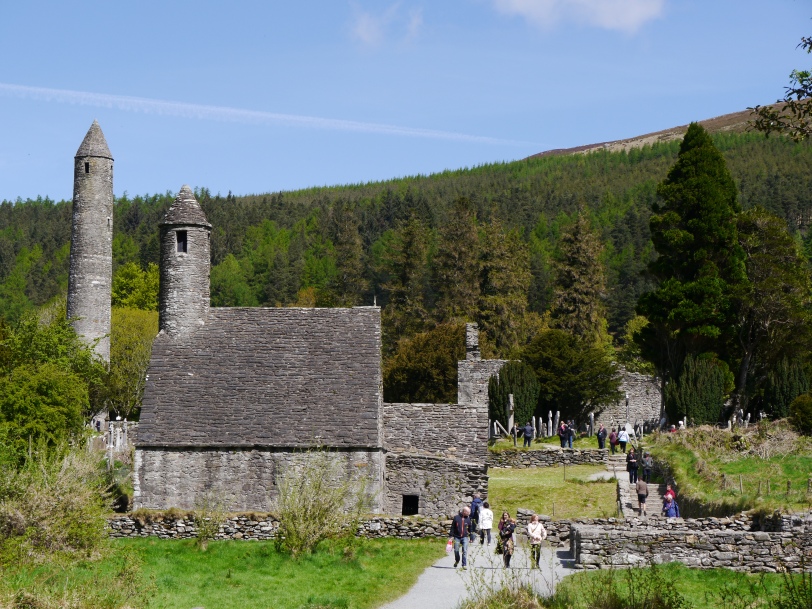 A view of the monastic village

John and me at Glendalough

It was a short 1.5 hour drive from Glendalough to Kilkenny and we timed it so that we could make the early afternoon tour at Smithwick’s. After quickly dropping our stuff off at the hotel (which I highly recommend – it was so nice and was in a very central location), we made our way to the Brewery for the tour. Here’s the key thing to know – Smithwick’s is NOT Guinness. They don’t have an 8-story museum to wander through or a store that takes up one floor by itself. No, Smithwick’s is the anti-Guinness. The store was a single display case with a couple of t-shirts and I vaguely remember a hat and the tour – if you don’t book early or meet up with a tour group, you are out of luck. There are maybe 20 spots per tour, most of which are filled by tour groups, and without one there is no seeing the brewery (oh, but you can’t book online either). And as luck would have it, two tours wanted to see it the same day we chose, so yes, we were out of luck. Also on the agenda was seeing the St. Canice Cathedral – which we did. But the prospect of climbing the tower interested no one. What did interest us was finding a pub – immediately. 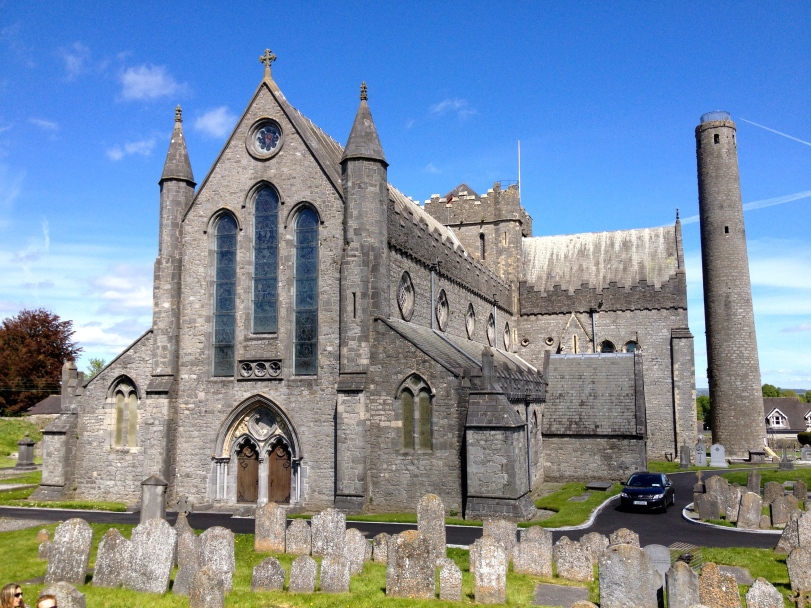 The St. Canice Cathedral – very beautiful, but no one was interested in climbing the tower.

The main street in Kilkenny – a colorful little town that was a delightful surprise! 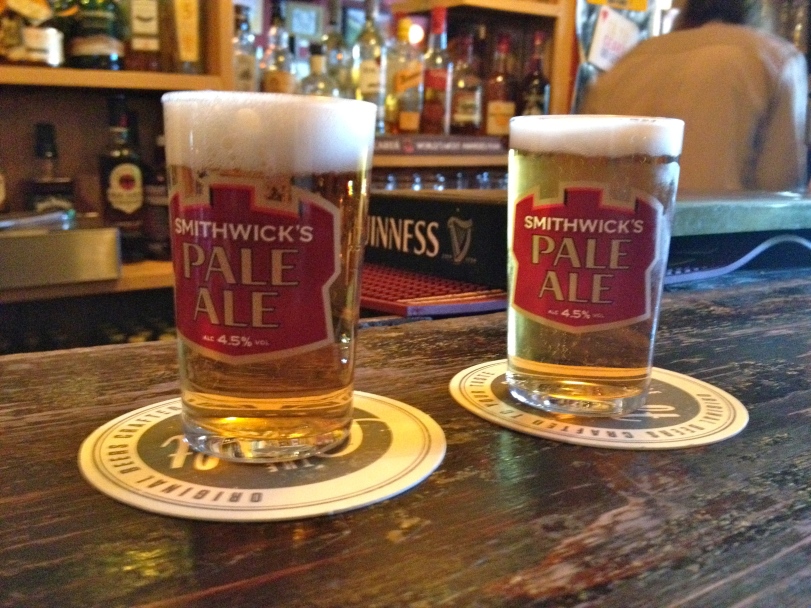 As close to sampling Smithwick’s as we were going to get!

On the plus side, we all very much enjoyed the pub, Cleere’s on main street! Cheers to the bartender who took this picture for us, and gave me a Smithwick’s cup! She even wrapped it for me! 🙂

After being denied at Smithwick’s and being ambivalent about spending much time at St. Canice Cathedral, we wandered back toward the heart of town, exploring the Kilkenny Castle and finding a wonderful little shopping center where many a gift was bought! 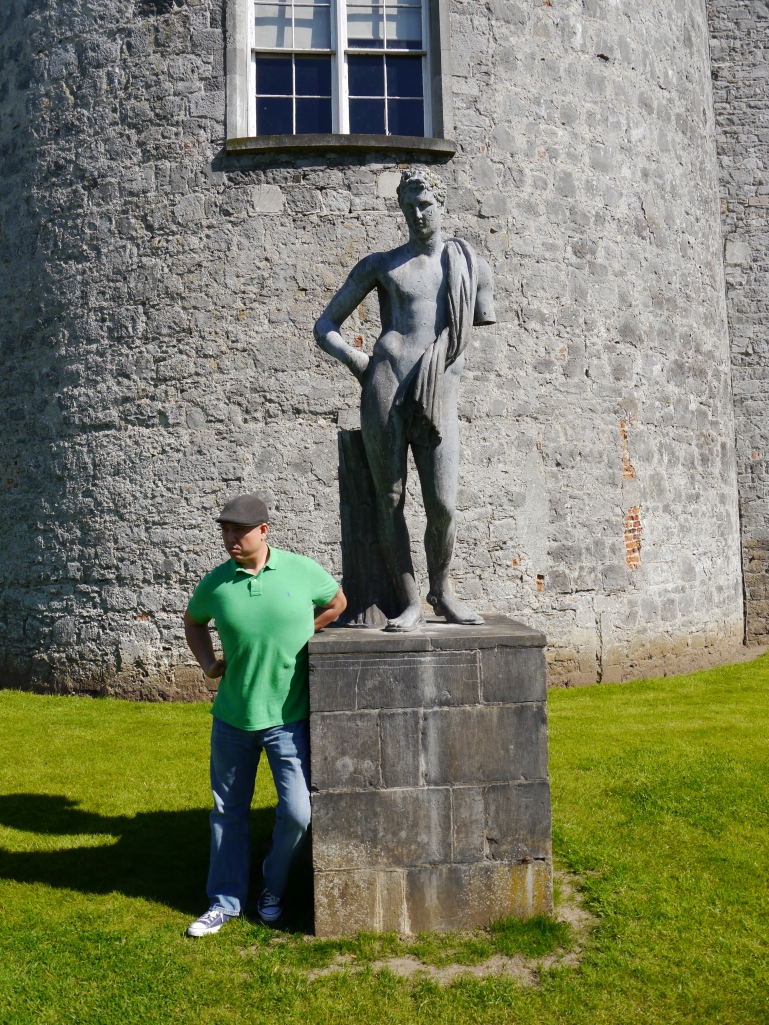 Hilarious because this is what you do when presented with a statue! 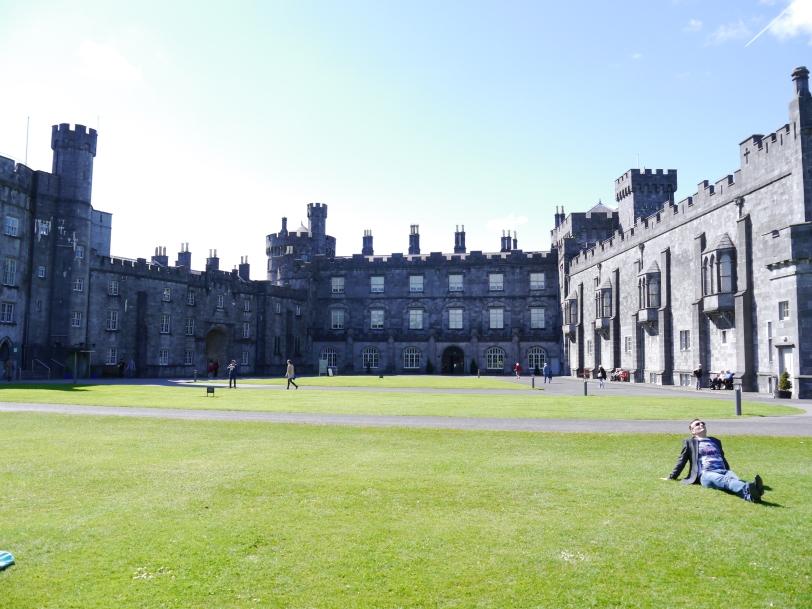 The Kilkenny Castle – it was quite pretty and the grounds were huge!

But arguably the best part of Kilkenny was the dinner, which was my favorite of the entire trip. We had written down Kyteler’s Inn as a place to eat, and while yes, it was insanely touristy, it made up for it by serving insanely good food! All four of us tried the Shepherd’s Pie, which was absolutely delicious. Touristy or not, I would definitely make a return trip for the food!

Two thumbs up for Kytelers Inn! 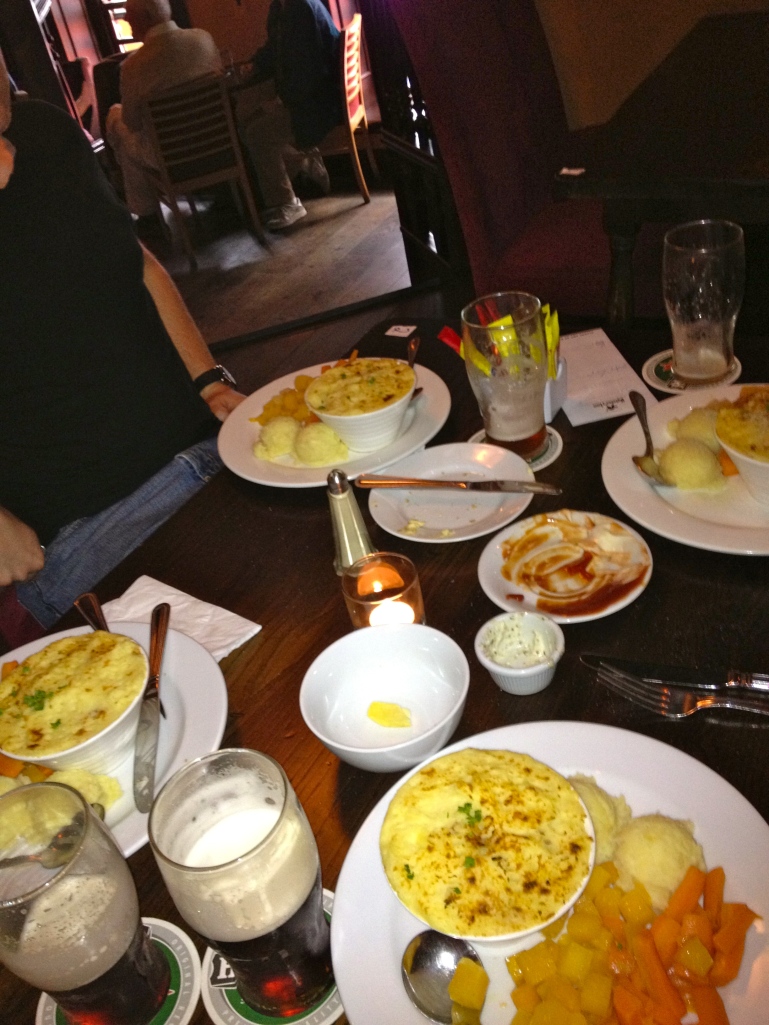 Our yummy dinner of Shepherd’s Pie! 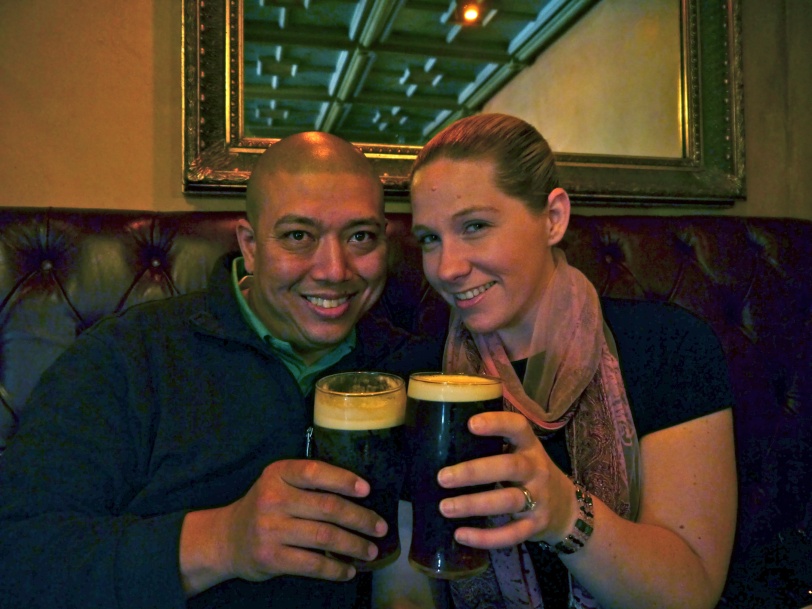 Final Impressions: Kilkenny was JUST the change of pace we needed following the chaos and sleeplessness of Dublin! We ate good food and got plenty of rest – important, because our schedule was still jam-packed! I really enjoyed Kilkenny and would put it on my itinerary if we ever go back.