Where: Dublin
When: May 2013
Hotel: Temple Bar Hotel for two our first two nights of a 10-day trip
Why Dublin: I had been wanting to go to Ireland for awhile – why, I have absolutely no idea. But it seemed like it would be a fun place where you could do a lot in a week or two vacation. Turns out, that is absolutely true. With our two good friends Jake and Renee, we set out on a 10-day trip around the Emerald Isle, starting and ending in Dublin. In attempts to keep this blog from being crazy long – the 10-day trip will be divided among separate posts, starting with our time in Dublin! I’m fascinated by both Dublin and Ireland’s history. The Irish people are nothing if not resilient – from the religious clashes in the 16th and 17th centuries, to the widespread famine in the 1800s, to the revolution against British rule to them finally gaining independence, there is so much to learn! Not to mention all of the cultural contributions that were made by the Irish men and women. It is a fun, easy town to explore and one I really enjoyed!

Unfortunately, because we had booked the entire tour through EuropeanDestinations.com in August 2012 and opted NOT to get the travel insurance (seriously, there is no way we could have predicted my tour over here), we couldn’t switch our flights from the states. Fortunately, air travel is especially cheap in Europe thanks to airlines such as German Wings and RyanAir! We booked our flight out of a small town called Memmingen and were grateful for the short two-hour plane ride into Dublin.

When flying in Europe – use RyanAir! Cheap and reliable – and if nothing else, entertaining. Honestly, on what other airline will they sell you smokeless tobacco?

We wanted to stay close in close proximity to a lot of the main sites, and picked Temple Bar Hotel for the first two nights because it completely fit the bill. The hotel was in one of the main areas – popular for pubs and restaurants. Great for site-seeing, but be prepared to not sleep at all! 🙂 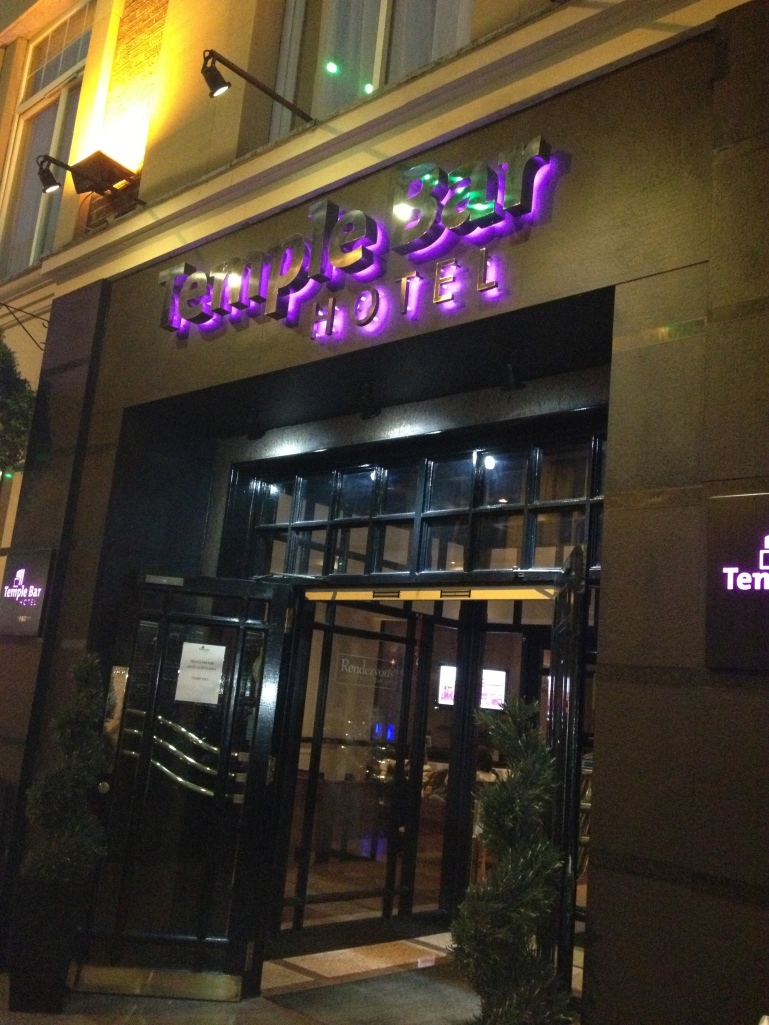 John and I arrived later in the afternoon, and before meeting up with Jake and Renee for dinner, we did a quick walk around Dublin, getting orientated with the location. I remember being excited with Dublin because it was so different from Germany. I absolutely love Germany – but it was nice to also have different scenery. We started our walk by the River Liffey, circling around to St. Patrick’s Cathedral, down by St. Stephen’s Green and back to the Temple Bar area. 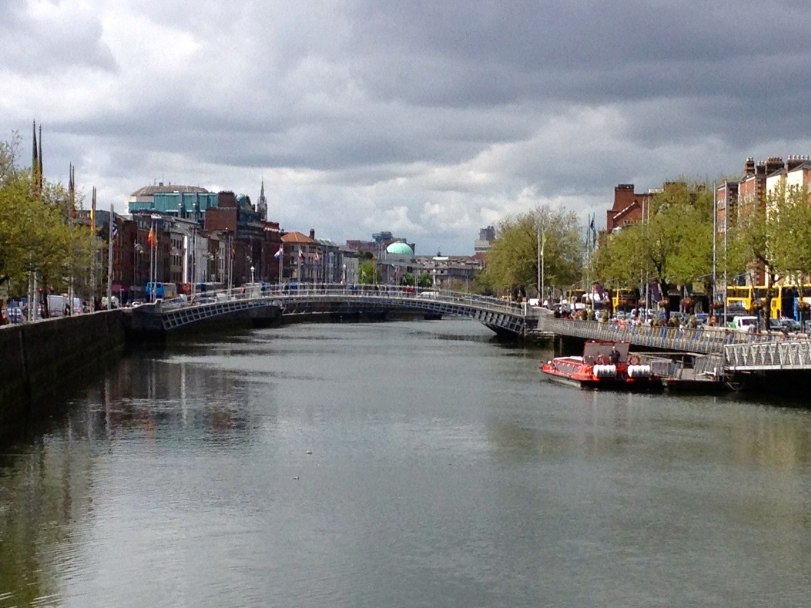 The Ha’ Penny Bridge  – aptly named because people used to be charged to cross the bridge, and it would cost half a penny! 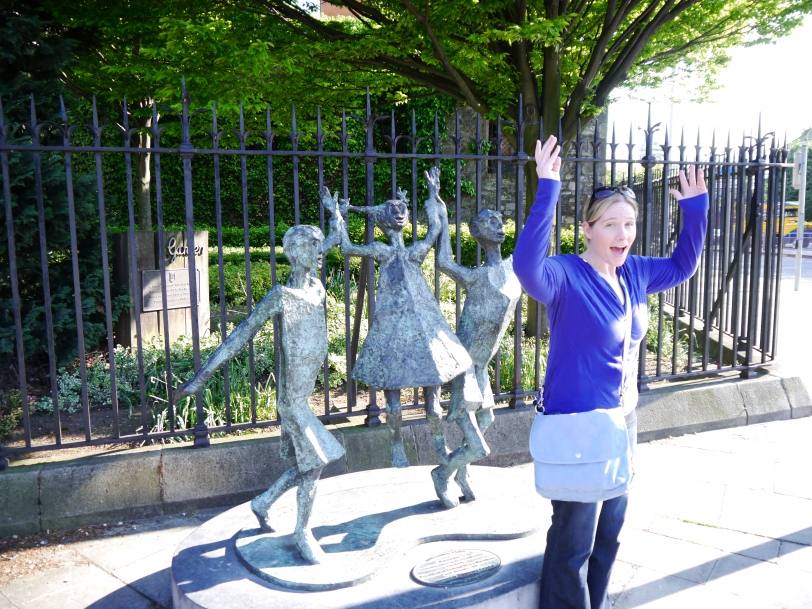 See a statue – do the pose! Dublin, and Ireland, provided wonderful opportunities for us to do just that!

The Irish driving on opposite sides than what we are used to make these handy road signs necessary. Especially after a couple of close calls!

I have to say now, I was NOT looking forward to Irish food after doing a little research on what we would probably be eating, which meant I was completely and wonderfully surprised that we didn’t have one bad meal in Ireland. The food was absolutely delicious! 🙂

Yummy Meal #1 – thanks to the Porterhouse near our hotel!

Jake and John enjoying an after dinner drink at the Palace Bar.

Day #2 was packed-full with activities revolving mostly around Dublin’s finest products. A tour at the Guinness Storehouse, the Jameson Storehouse and a walking Literary Pub Crawl were the highlights of the day! (A piece of advice – if you go, book tickets online – which as we found with most of the places we visited was the way to go! If you book online, you will more than likely get a discount!)  We also managed to squeeze a quick swing by the Book of Kells to see that and the Long Hall. Busy, but fun!

Our tour was at 9 a.m…seemed appropriate to start early! 🙂 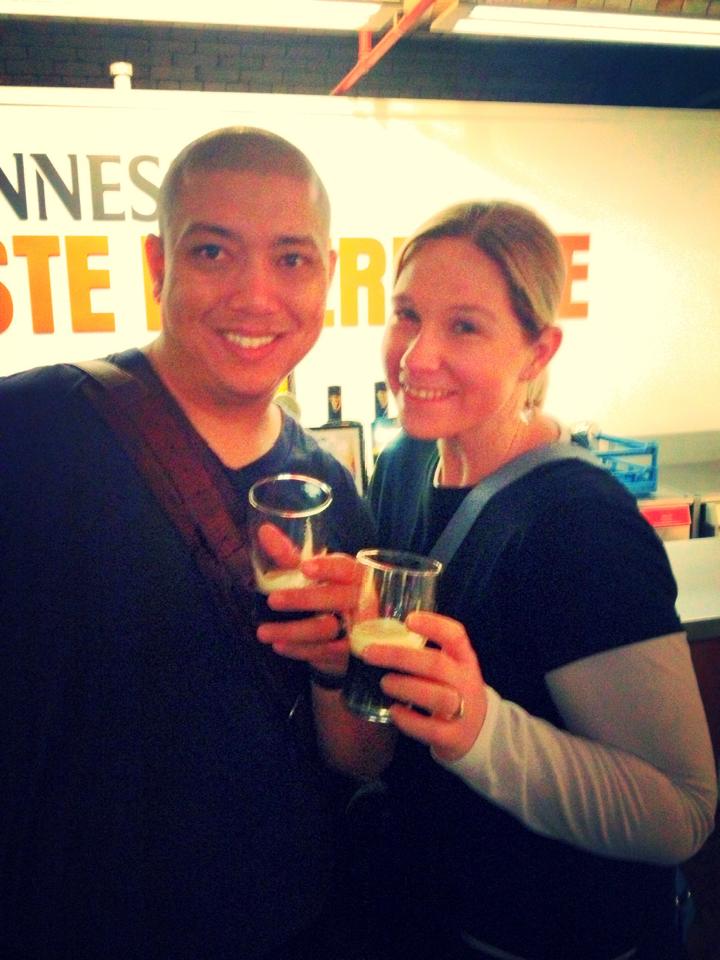 I’m not a huge Guinness fan so I was happy to try the small sample mid-tour, but gave away the large pint of it that they give you at the end of the tour!

We wanted to see the Book of Kells, which to be honest is a bit of a letdown. You really don’t get to see very much it at all, and while the provided information is nice – it’s hard to really get a good concept of what it is when you see only a small portion of the book itself. However, the tour also involves a stop at the Long Hall Library, which made up for the book disappointment.

The Long Hall…fun to just look at and appreciate.

We booked the afternoon Jameson tour, which gave us enough time to have lunch at one of Dublin’s well-known fish and chips restaurants (or in my case, chicken nuggets and chips!) 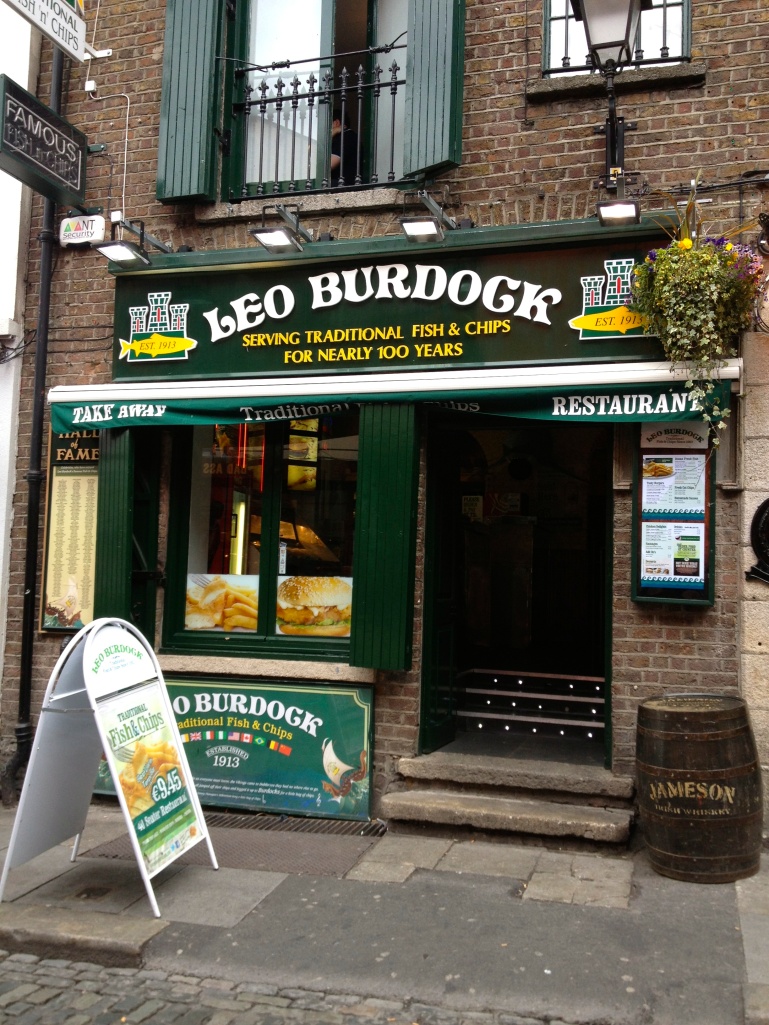 Famous for their Fish and Chips – try it out! (I recommend the chicken!) 🙂

Our walk to the Jameson tour took use by a lot of historical sites that were important during the Irish Revolution, and there are still signs of the fighting that went down today. A lot of buildings and statues didn’t repair the damage made by the bullet holes. 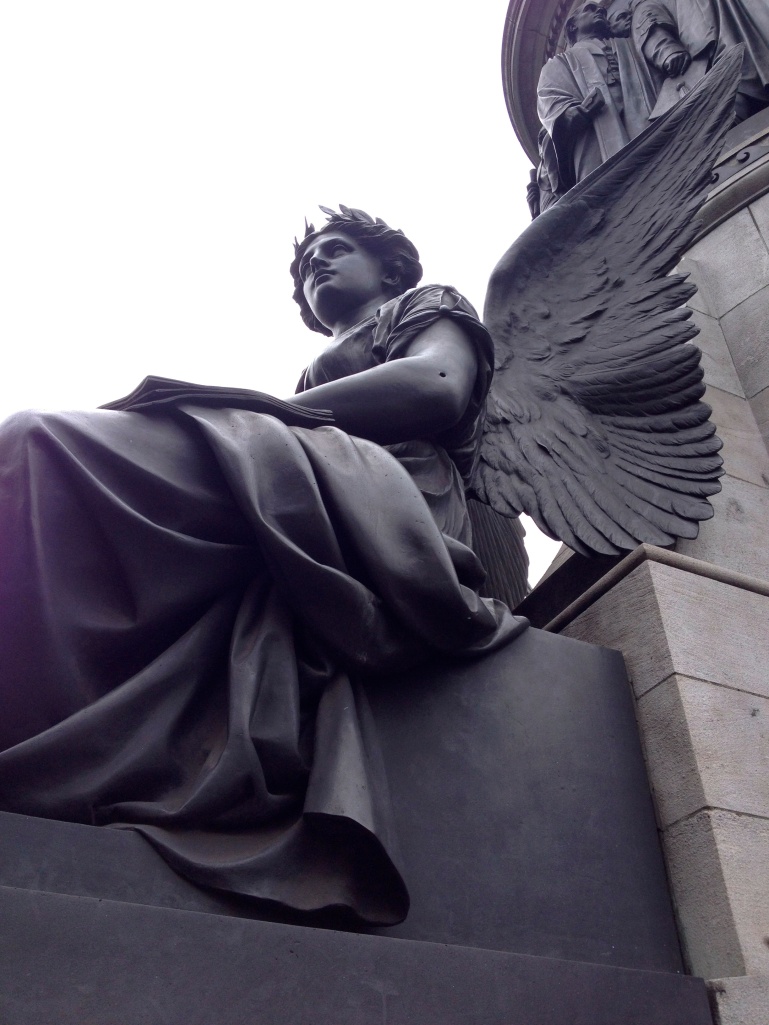 You can see the bullet hole in the arm of the statue that is on one of Dublin’s main roads.

I had been told that while it seems like a novel idea to be in Ireland and therefore do a ton of whiskey distillery tours, but the truth is that if you do one – you have done them all. Thankfully, we only had one tour on our itinerary, and I agree it was enough. Especially coupled with the Guinness tour – because honestly, while the tours are cool and I am glad to say we did them – it’s the included drinks that are the important part. And those can also be had a fun pub with the friendly Irish folk!

The four of us following the Jameson tour!

Our last stop before we left Dublin for the first time was the Literary Pub Crawl, which I highly recommend. It is entertaining and takes you to four pubs in Dublin, all with different historical significance. The two actors which hosted the Pub Crawl were very funny and it was a great way to learn a little more about the city! 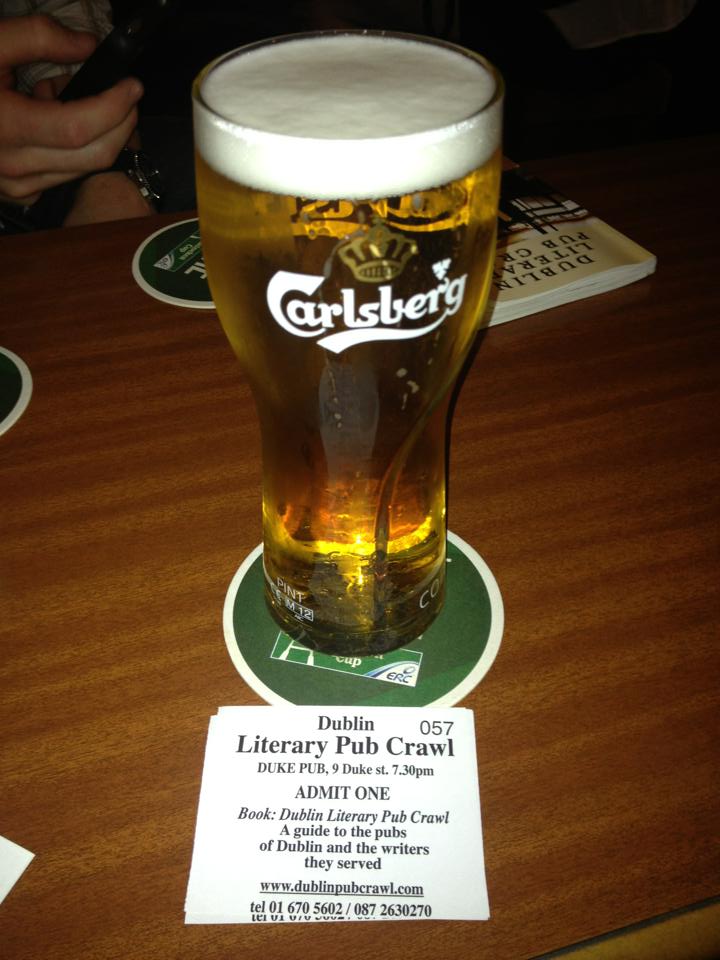 Let’s get this Pub Crawl started!

John in front of one of the pubs on the crawl!

Final Impressions:  We’re not entirely finished exploring Dublin yet! We stayed two extra nights on the back end of the trip as well, which means more sites and pictures to be revisited later. So instead of going into a lot of detail now, I will save it for later. I will say, though, that I really enjoyed Dublin and would recommend a visit!