We’ve been to Salzburg twice and have been enamored with it both times. The first time, we took a Sound of Music bike tour, and it was amazing. Even non-movie fans will enjoy the tour (it’s seriously on of the best!), and it was a great way to get to see the city. The second time, we only had about half a day, but it was once again a great reminder of the charm of Salzburg!

When: August 2013
Hotel: Hotel Schwarzes Rossl
Why Salzburg: My mom was coming to visit, and it was her first trip to Europe. I wanted to make it as memorable as possible, and when asking around at work what destination was best liked by parents, one of my co-workers suggested I take her to Salzburg, Austria to do the Fraulein Maria Sound of Music Bike Tour. My mom likes the Sound of Music, I’d never been to Salzburg, and it would be another country for her to visit. It all sounded great!

The Trip: We arrived late into Salzburg after spending a better part of the day in Munich. Munich is about 2.5 hours from Stuttgart and 1.5 hours from Salzburg, so it was a great stopping point. And it was actually really nice – we went for a night walk around Salzburg and had the place to ourselves.

Salzburg means “salt fortress,” thanks to its salt mining trade. The city incurred very little damage during WWII, meaning that many of the baroque style buildings stand in their original state. This most likely lent to Salzburg earning a UNESCO designation in 1997.

Salzburg was charming and likable right off the bat. The historic old town, with its cobblestone streets and unique store signs are incredibly endearing. I liked Salzburg immediately.

Salzburg is the birthplace of Mozart, and in addition to this statue, his birth house is a main attraction

The next day, we woke up and had a little bit of time to enjoy the Mirabell Gardens, where Fraulein Maria and the Von Trapp kids ran around singing Do Re Mi. It is also on the grounds of the Mirabell Palace, that was built in 1606. It was fun getting to take different pictures. 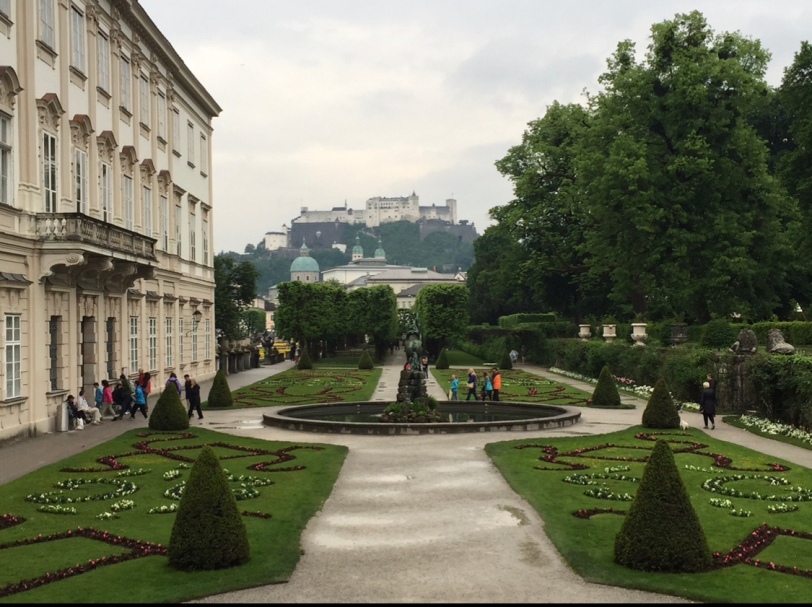 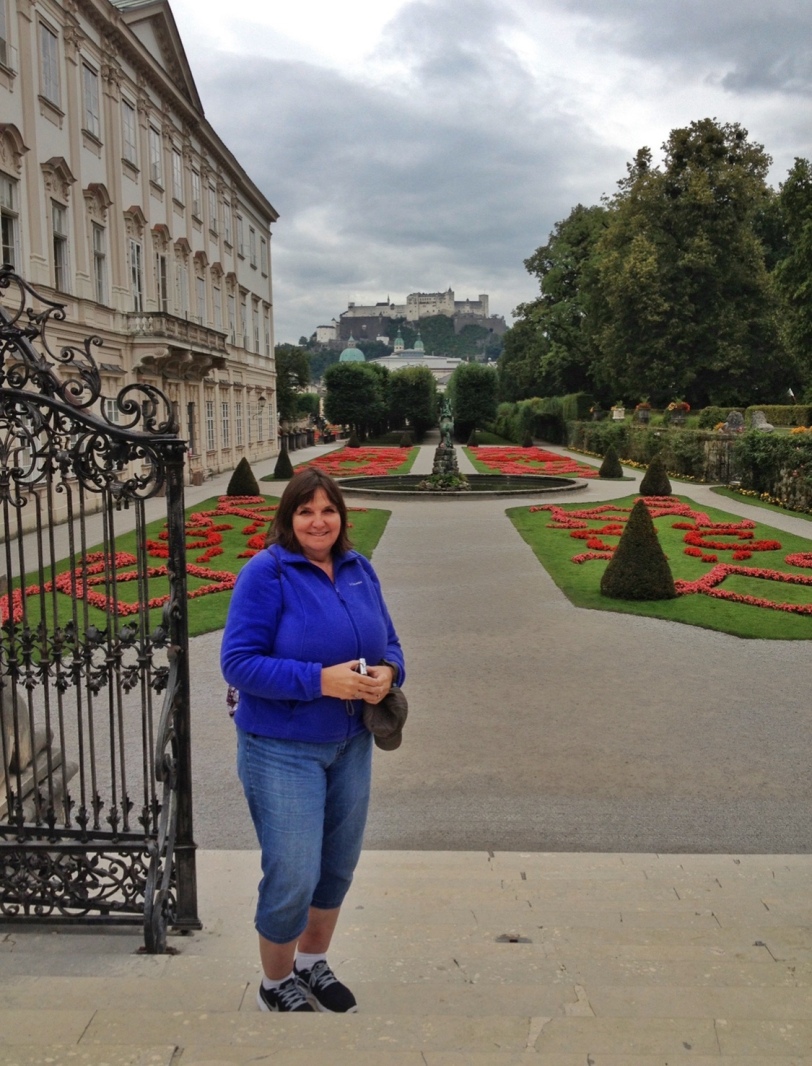 Mom on the steps! 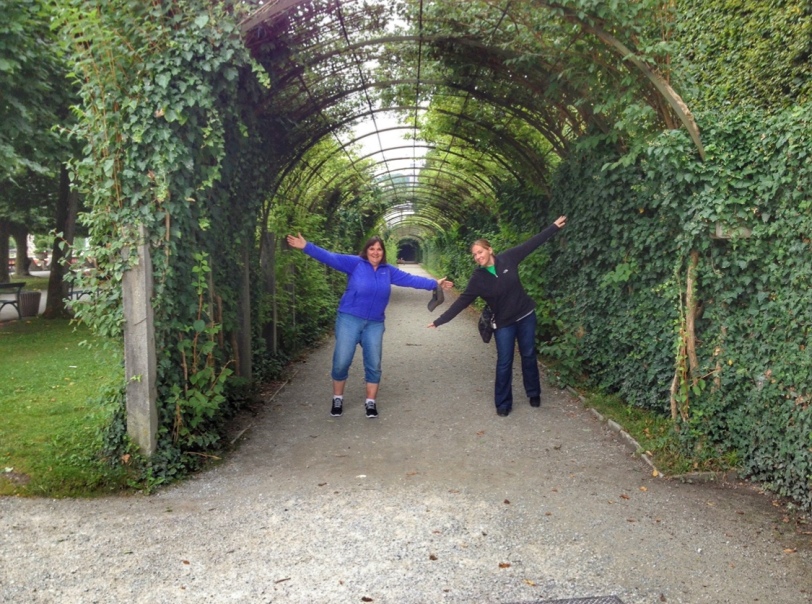 We couldn’t help it – we had to reenact the movie.

We signed up to take the Fraulein Maria bike tour – and I honestly can’t recommend it enough. It is one of the best tours we have ever take here in Europe, and it is important to note that even if you don’t like the movie you should take the bike tour. The tour highlights all of the film locations, yes, but it also showcases Salzburg and its highlights. It gives a tour and history of the town. The bike tour only covers a distance of 8 miles, but takes 3.5 hours so it moves at a slow enough pace to really enjoy each stop. It was fantastic.

Getting ready for our tour!

Picture this in the Sound of Music with a large Nazi flag…apparently, the people of Salzburg had no idea a movie was being filmed, so some of the residents saw the flag, went home, packed up their belongings and left immediately! That almost halted movie production!

In front of the fountain, where there was lots of singing and dancing! 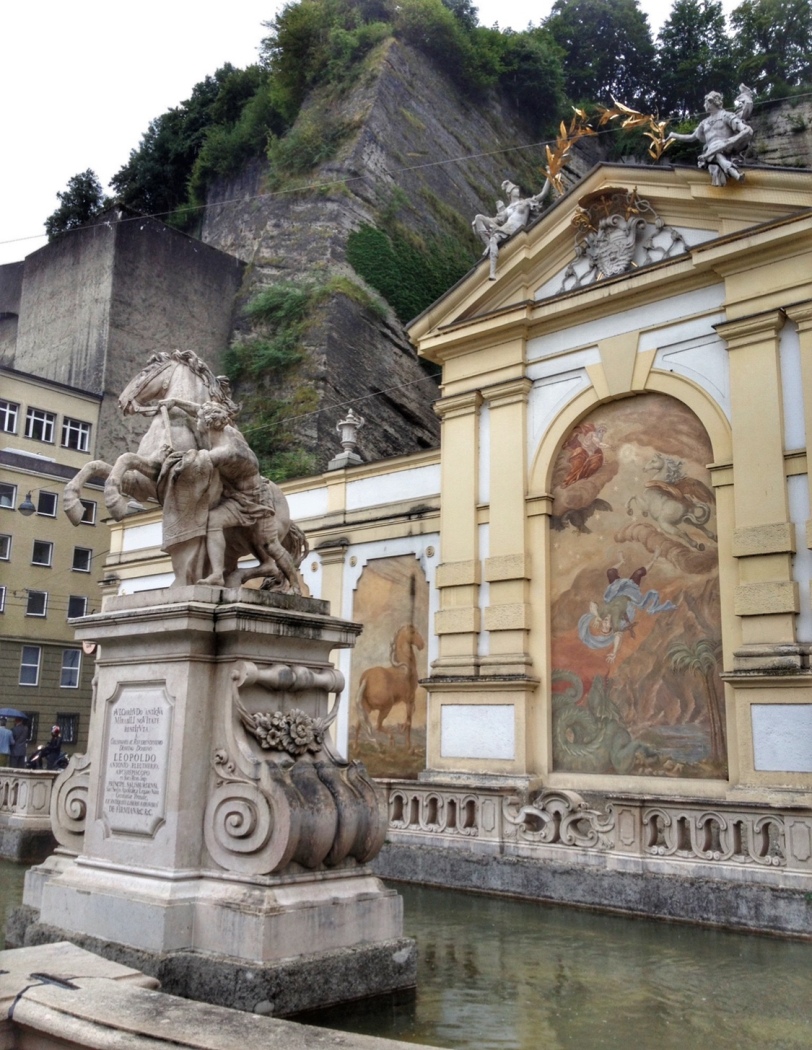 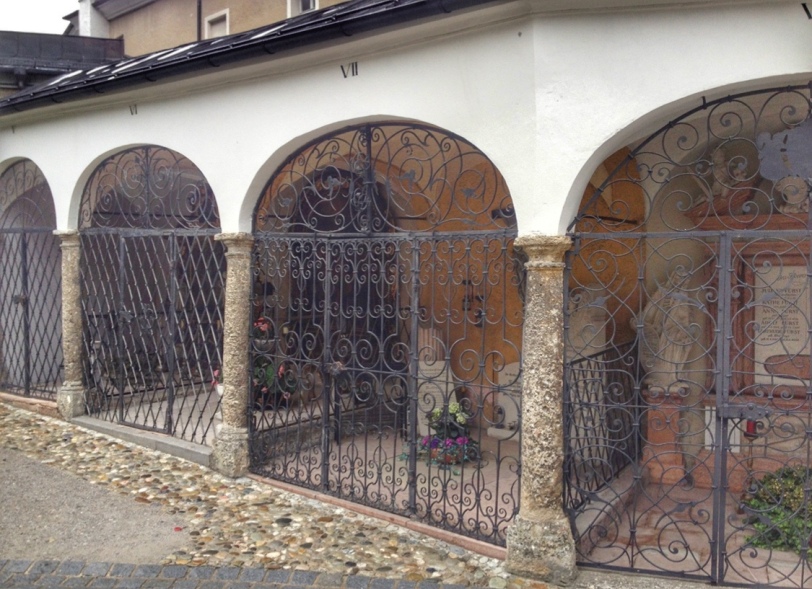 The Catacombs where the Von Trapp family hid before escaping

Inside the church where the real Maria and Capt Von Trapp got married!

The top gate was where the Von Trapps pushed their car out of the Abbey…the lower passageway is where the kids walked up to get to Maria!

The movie version of the back of the Von Trapp house – where the kids fell out of the boat into the water and where they filmed the patio scenes. 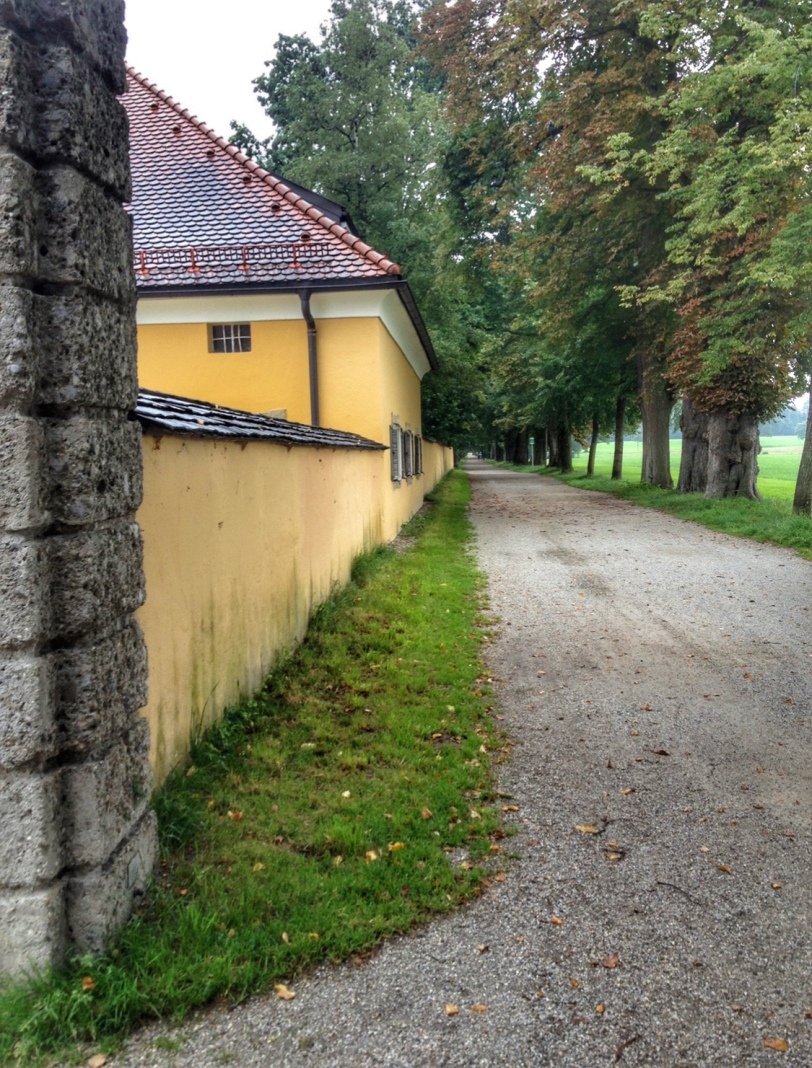 The front of the house…which was actually different from where the back of the house was filmed!

The gazebo – which sadly you can’t go in anymore because a woman was reenacting the scene, fell, and sued. 😦

Walking back to the car post-tour. 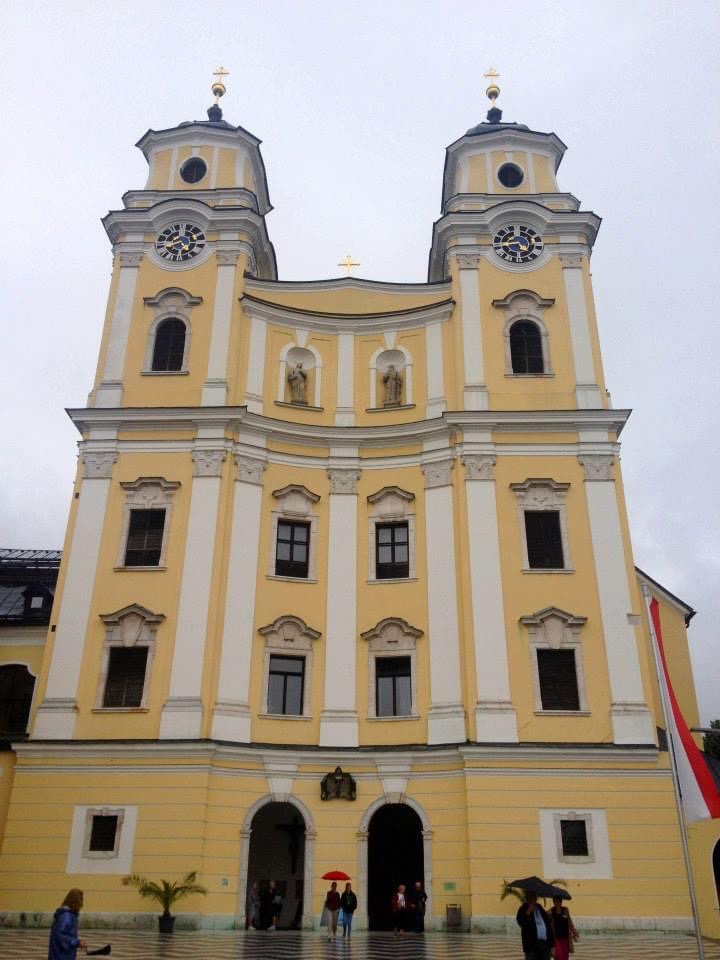 Final stop – the church where Maria and the Capt were filmed in the movie!

It was gorgeous inside.

Final Impressions: It was a quick overnight trip, but I am so happy we did it, and taking the tour definitely helped cover a lot of ground we might otherwise not have seen. I loved Salzburg right away. It’s not inexpensive, but it is for sure worth a visit. This is one of the prettiest areas of Austria, and a trip to Salzburg can be coupled with trips to the surrounding lake areas.

When: May 2015
Hotel:  Altstadt Hotel Hofwirt Salzburg
Why Salzburg: The intent on this road trip was try to see as much as we could, so of course a stop in Salzburg was warranted. And it was key because after Vienna, we needed to get back on track with our cute, endearing towns. (Sorry Vienna!) We only scheduled half a day there, and just planned to walk around. And it’s definitely doable, but try to give Salzburg a full day or longer.

The Trip: It took 3 hours to drive from Vienna to Salzburg, and arrived in town around lunchtime and set out for exploring the town.

Always stop by the Mirabell Gardens!

One of my favorite pictures! 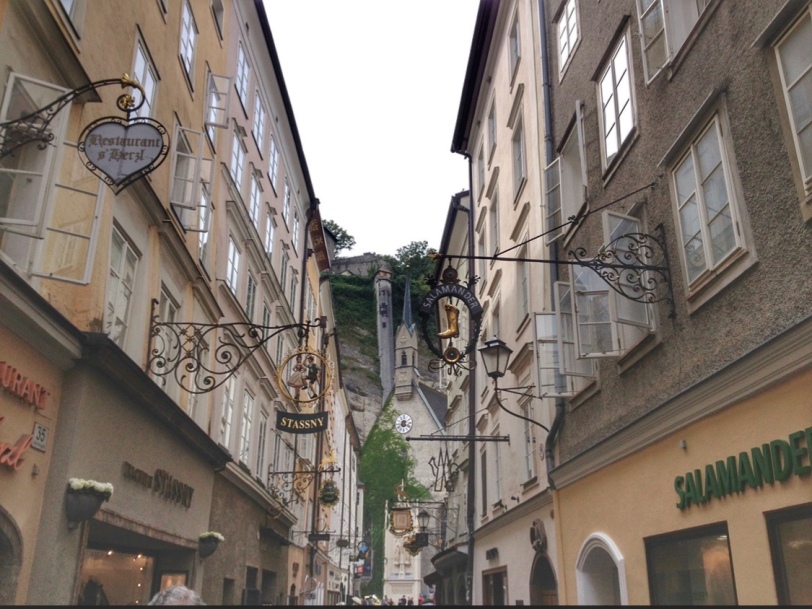 It is hard to capture the adorableness of Geistreidstrasse , Salzburg;s famous shopping street. The cute little store signs are incomparable.

The Salzburg fortress, cathedral and another church – there are 27 total in Salzburg’s historic center alone!

The front of the cathedral 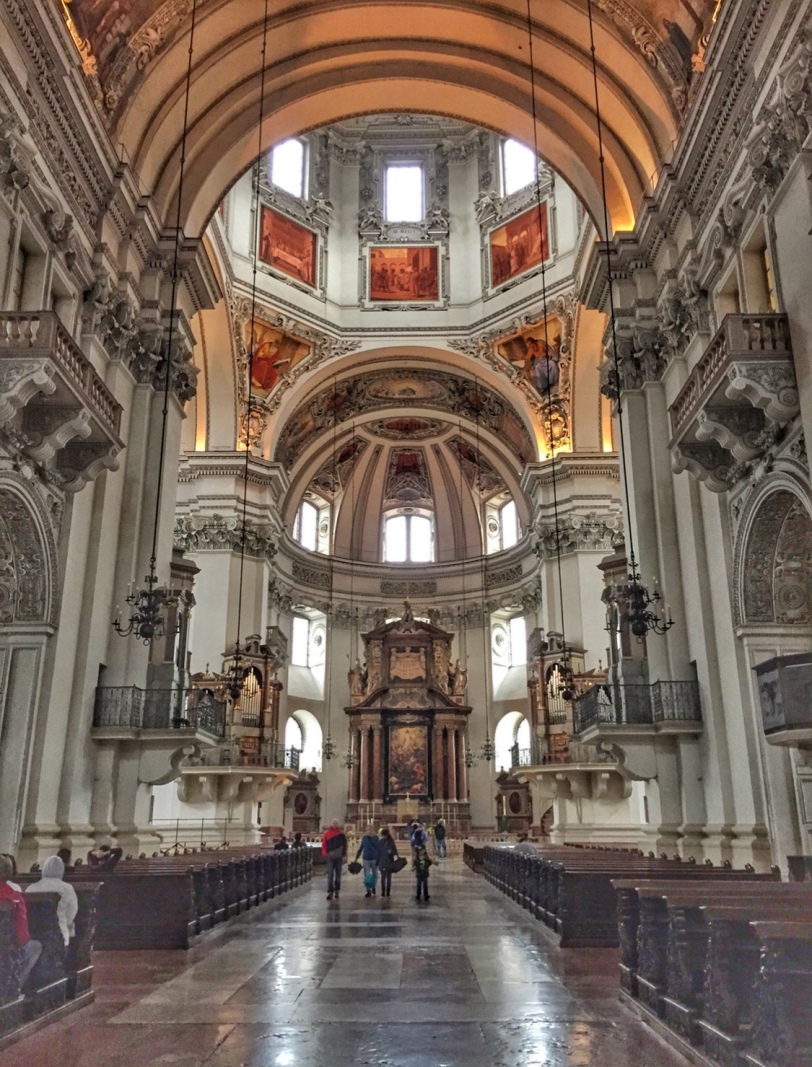 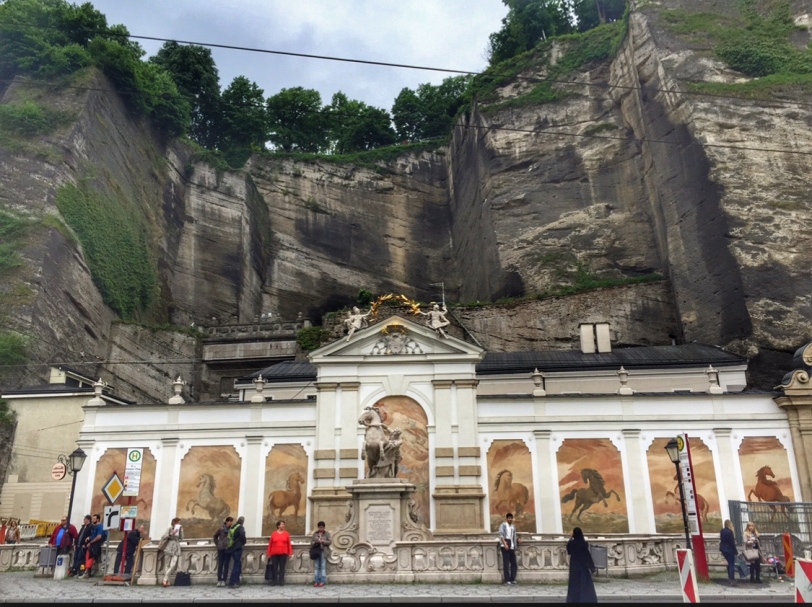 The Mönchsberg cliffs and the Horse Fountain

Final Impressions: I’m so happy we made Salzburg a stop, because I liked it all over again. If we had time, I would have definitely gone up the Hohensalzburg Fortress. (Germany and Austria are going to open the borders in June – to each other, not internationally – and just writing this makes me want to go back one more time! I just feel there is a few more things I want to see in Salzburg. It may get overshadowed by Vienna, but it shines as the little sister and I really enjoyed it most between the two.

One thought on “Salzburg, Austria”