Vienna is special to me because it was where I visited my first Christmas Markets ever (if I was going to go – I was going big!) I first went in 2013, followed by a quick break in 2014 and then again for two days in 2015. Vienna regularly tops the list of places to live, and is well known for its arts and museums, and yes Christmas markets.

When: November 2013
Hotel: Hotel Stefanie
Why Vienna: I was only supposed to be in Germany for eight months in 2013, so when my orders were extended, all I could think about was that I was going to get to see these mythical Christmas markets I had heard about. And I choose what I thought was the best location to start off my exploration of these markets – Vienna!

The Trip: In 2013, it seemed like a weird idea to me to fly to Vienna, when you could drive it in just under seven hours. Sadly, Johnny was back in the states at this time, but I couldn’t pass up seeing what I had was the best Christmas markets in Europe in what I had read was one of the prettiest cities on the continent! It was a no-brainer. I rented a car and set off for Wien (if you are visiting Austria, and see signs to Wien…it’s Vienna).

I left early enough in the day, that by the time I got to Vienna, the Christmas lights were twinkling and I was ready to go. I didn’t even have a plan for my time there – I two nights, and one full day to get my fill of Christmas. (Also, Vienna is a super safe town, so there was no fear from walking around). In total, there are 12(!) Christmas Markets in Vienna, and most of them are in the old town area – making walking to them super easy. I was a bit tired from my drive, so I made it to the Stephansplatz Christmas Market, and wandered along Graben Street (also finding one of the best bratwurst stands in Europe!) and found the Rathaus before calling it a night.

This was my hotel – notable for being the first one I stayed in that had free Prosecco at breakfast. It’s one of my favorite things. 🙂

By the Stephansplatz Tree

So many decorations! (Also, I was really big into bright filters back then…sigh) 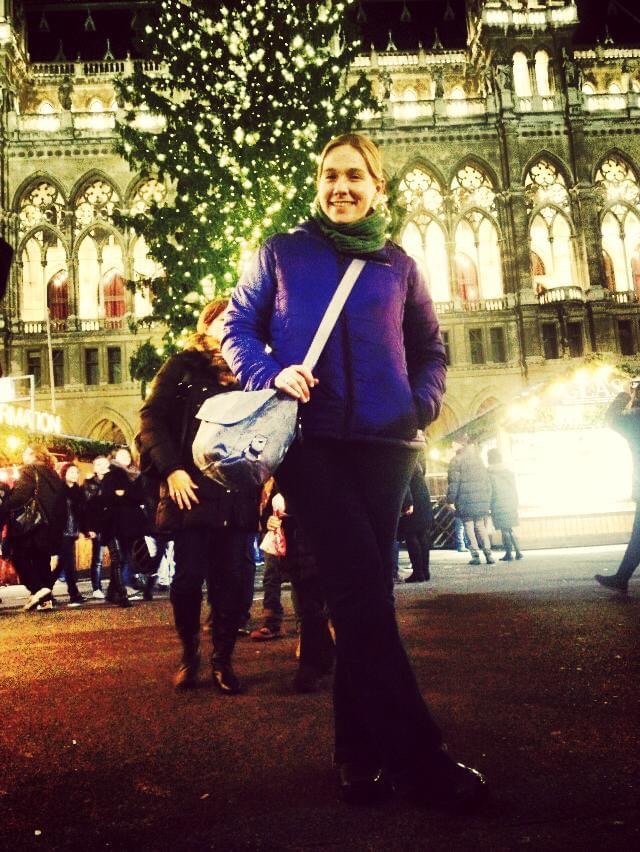 At the Rathaus Market 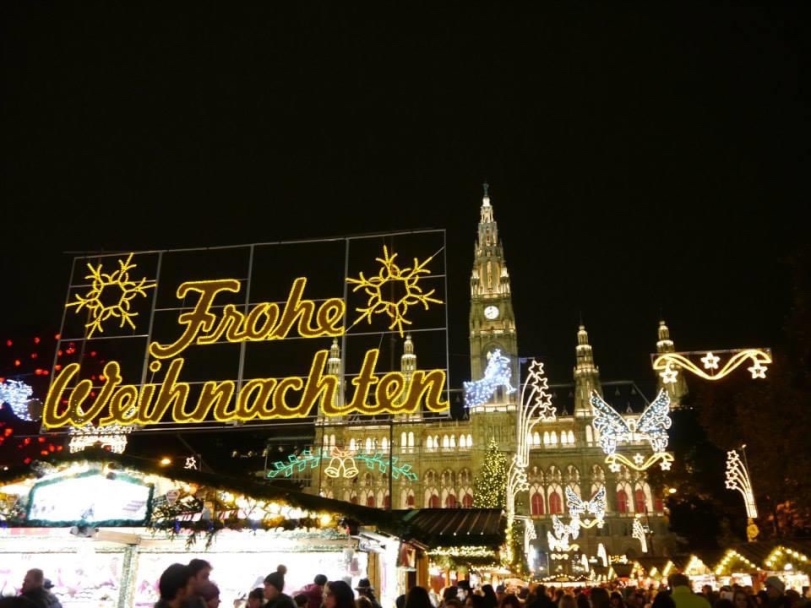 The next day was a major walking day, and Vienna is actually very walkable (but there is also the option to hop on the trams in case your legs get tired). A majority of Vienna’s must-see sites sit on the Ring Road and in, making it for an easy loop to the markets. I started off in the direction of the Sigmund Freud Museum (just to walk by, not to go into), before making my way along the Ring Road. It naturally leads to the Votivkirche, the Rathaus, the Hofburg Compound before making my way back to the main center. There were SO MANY markets, which was absolutely awesome because they were all a little different. To end the night, I took the train out to Schonbrunn Palace. A majority of the sights on the palace grounds are closed in the winter, so I just stayed outside and walked the market there before heading back to bed to rest for the drive home.

I’m not sure what this building was – but I really liked it! 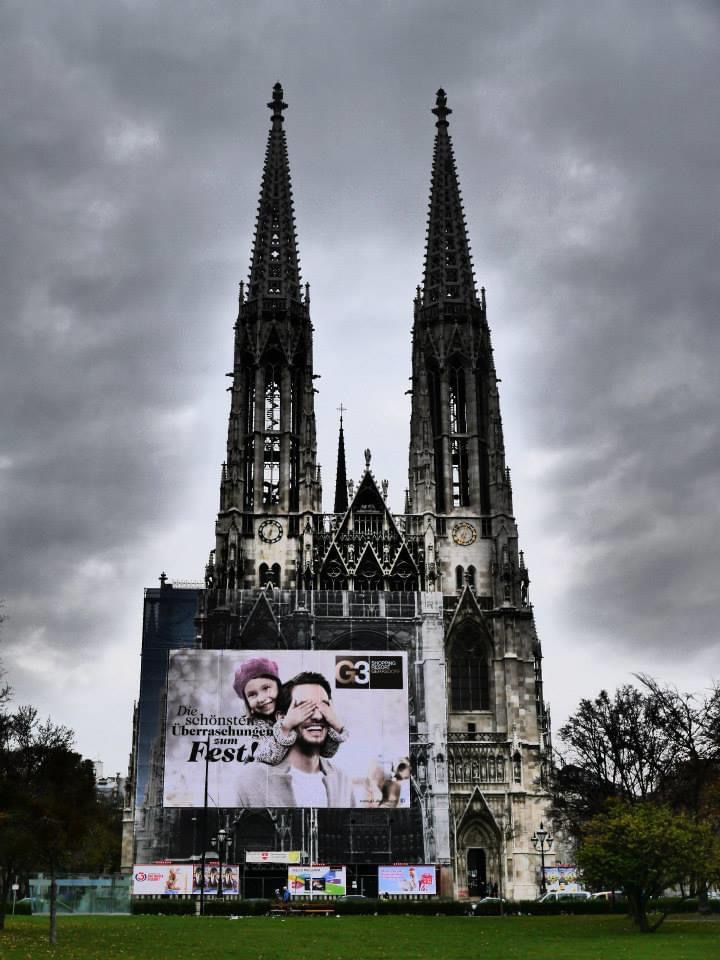 So many markets tucked around and the best part is – they all have different mugs!

The Hofburg – part of the Hapsburg Palace complex 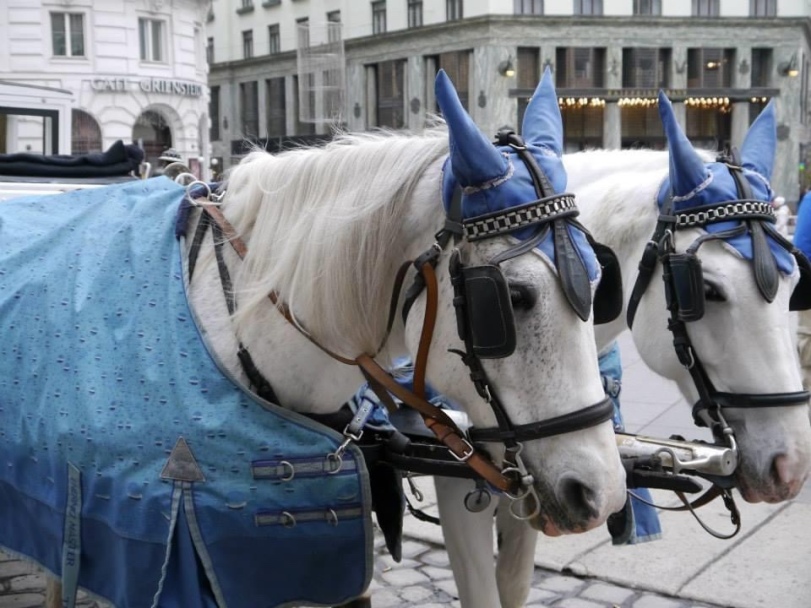 I loved these horses and their cute earmuffs! 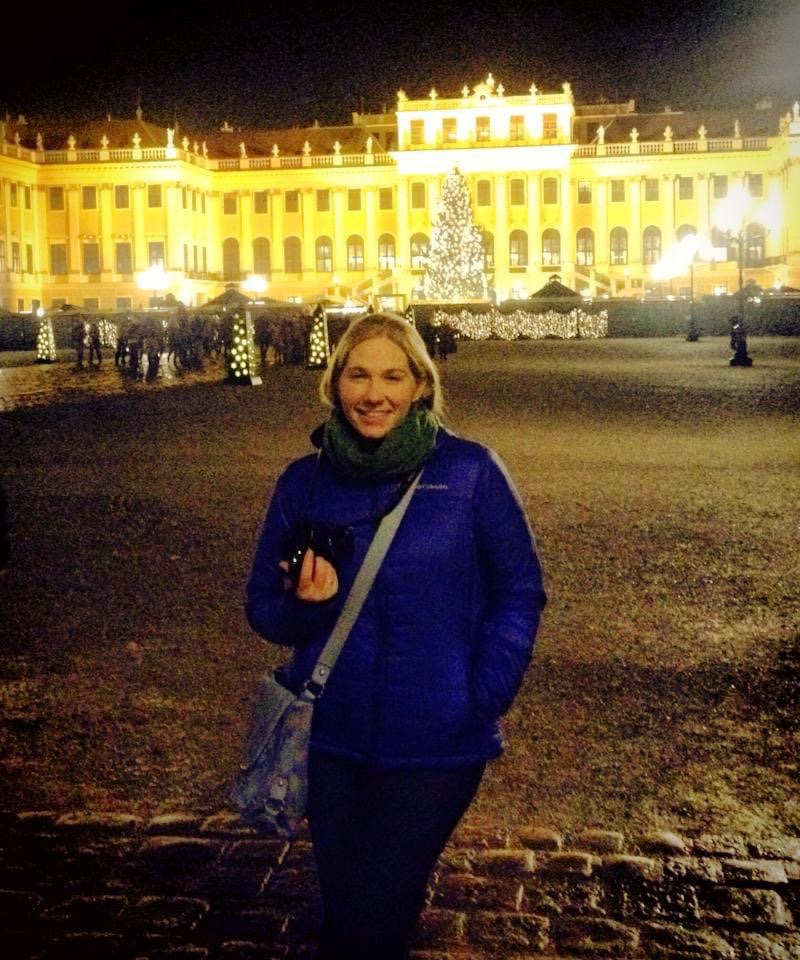 Made it to Schonbrunn Palace…I am so sad when I see this pic…that blue coach bag was the BEST travel bag, and I haven’t found one like it since. 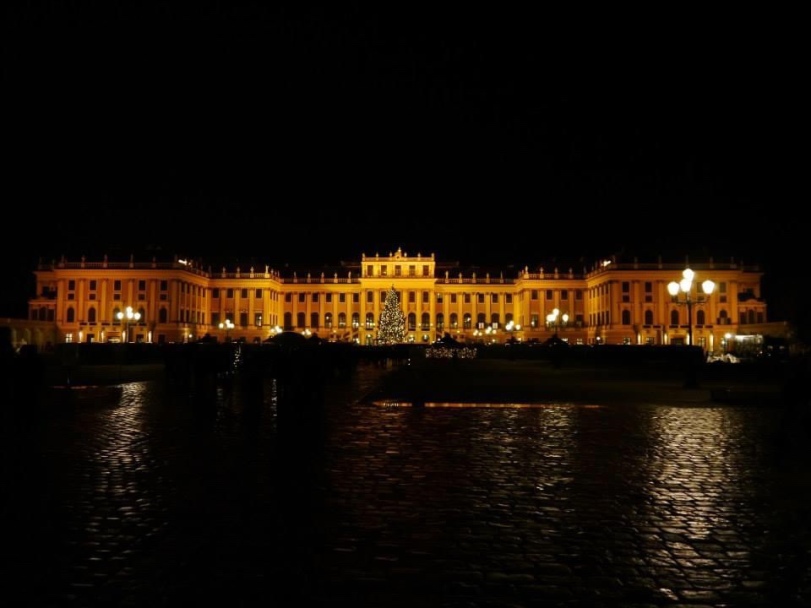 Final Impressions: I went for the Christmas markets and a lot of what I saw around town was honestly thanks to the the markets, because they led me to each place. The markets were great, but here’s the hard truth – as much as I wanted to love Vienna…I just didn’t. I know that first trip I only kind of scratched the surface, so I was willing to maybe give it the benefit of the doubt. But I was disappointed because I’d heard how great Vienna was, and I didn’t walk away with the same feeling.

When: February 2014
Hotel:  N/A
Why Vienna: It takes about nine hours to get from Stuttgart to Budapest, so having a pit stop six hours into the ride seemed like a good choice. Plus, John had never been there, and knew we didn’t need much time to see some of the highlights, so it worked out perfectly. Also, I thought maybe if I went back, I would see the Vienna that SO MANY PEOPLE love and I really, really wanted to love it.

We made it to Austria

The Trip: I knew if we parked near the Rathaus, then we would be able to walk Ring Road, swing by Stephansplatz, grab a bratwurst and then hit the road. We had a really good time walking around, and the most fun part was walking around the Rathaus. After the Christmas Markets, they build the GIANT ice skating rink in front of the Rathaus – and it’s so big it literally wraps around the trees and there are gluhwein stands. It was super fun. So much so, that we almost went ice skating but we figured that was maybe not the best idea at the start of our trip if we twisted an ankle or something. That is a really fond memory. 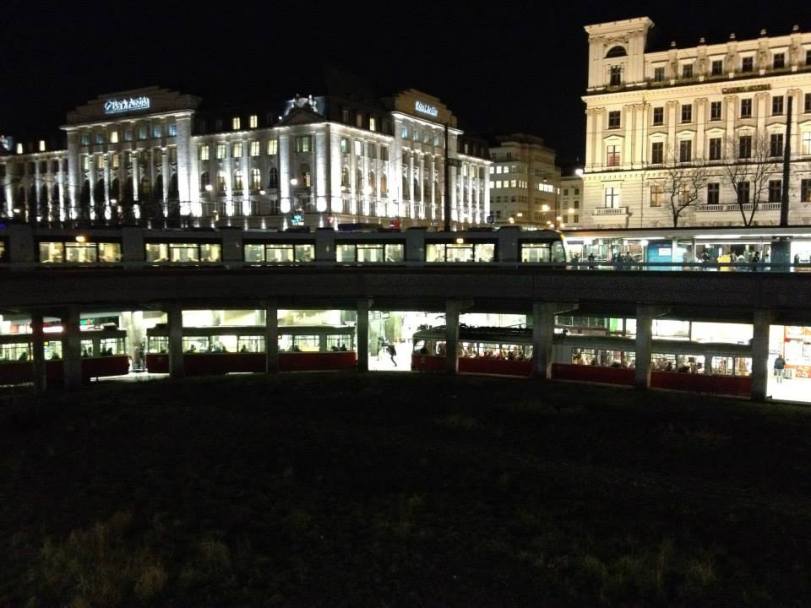 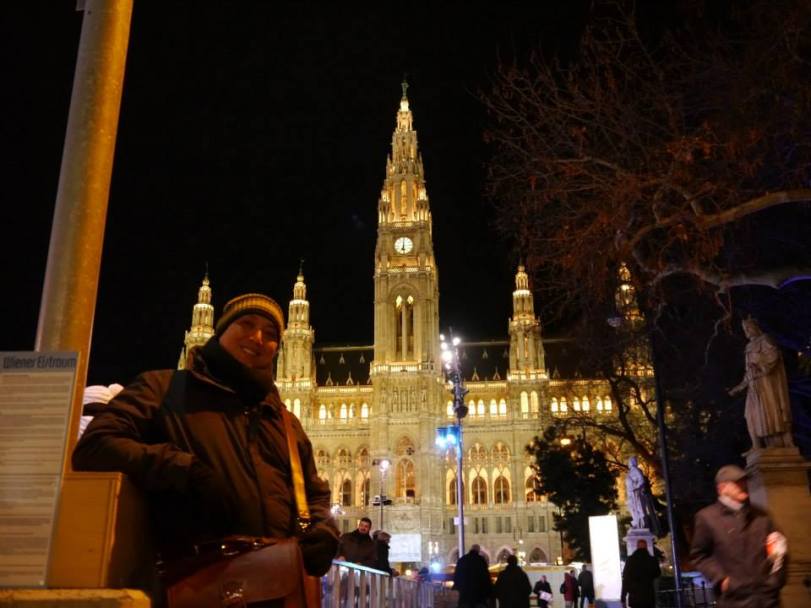 Made it to the Rathaus 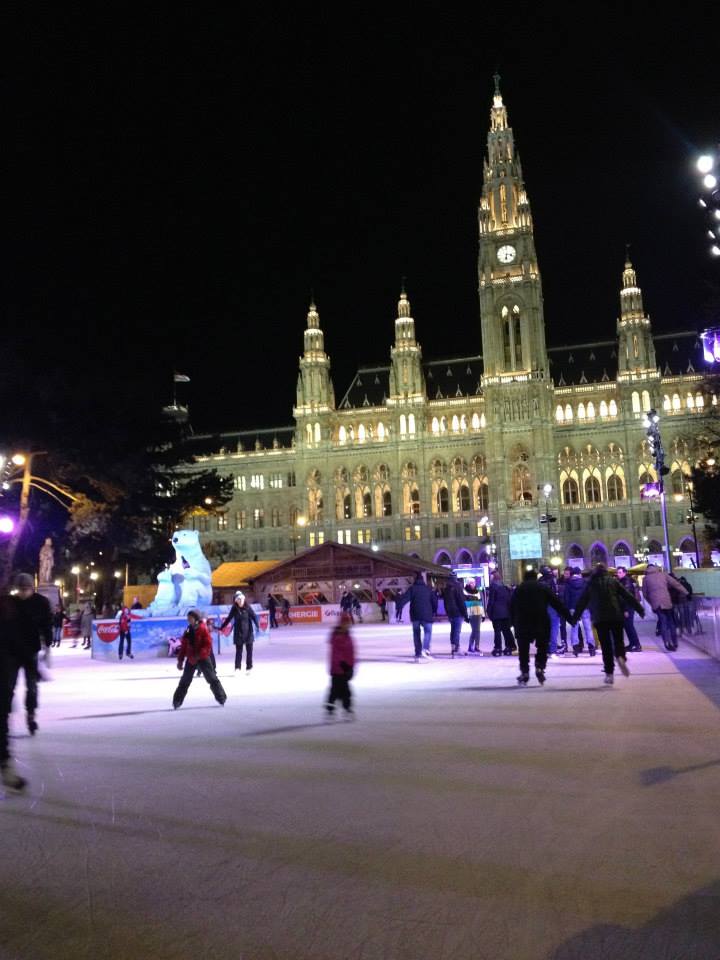 If you are on Graben Street by St. Stephan’s Church – find this stand. 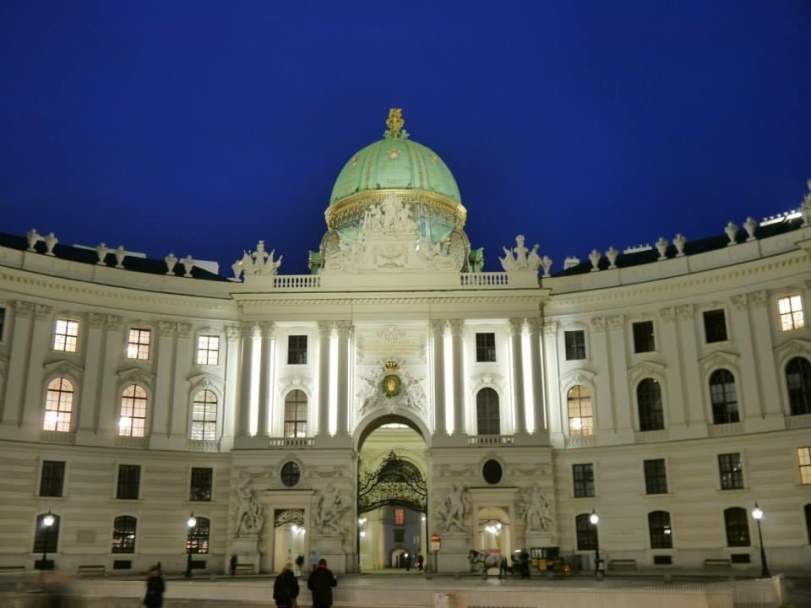 The entrance to the Hofsburg

Final Impressions: We were literally only there for about two hours, but in that time, my first impression of Vienna being meh had not changed. And after spending time in Budapest afterwards, Vienna was definitely falling down the list of places we visited.

When: May 2015
Hotel: Hotel Kolping Wien Zentral
Why Vienna: Vienna was a natural stop on the way back to Stuttgart from Budapest, so we could break up the drive a bit.

The Trip: It is an easy drive from Budapest to Vienna, and we arrived around lunch time. Our hotel was close to the Naschmarkt which is a mix between a market and restaurants. It’s always fun to walk around markets and see some of the local items sold, and this one was arguably the most famous market in Austria. Post lunch, the plan was to head out to the Schonbrunn Palace, circle back to town and swing by the Karlskirche before rounding out the day with a ride on the Riesenrad Ferris Wheel that has been in service since 1897. I had been to Schonbrunn and after lunch, it was time for John’s afternoon siesta, so our friends ventured out while we went back to the hotel. After our little nap, we went to a bar to have a drink before meeting up with our friends. It was a small cafe on a side street, and was another good memory I have from Vienna.

Lunch at the Naschmarkt 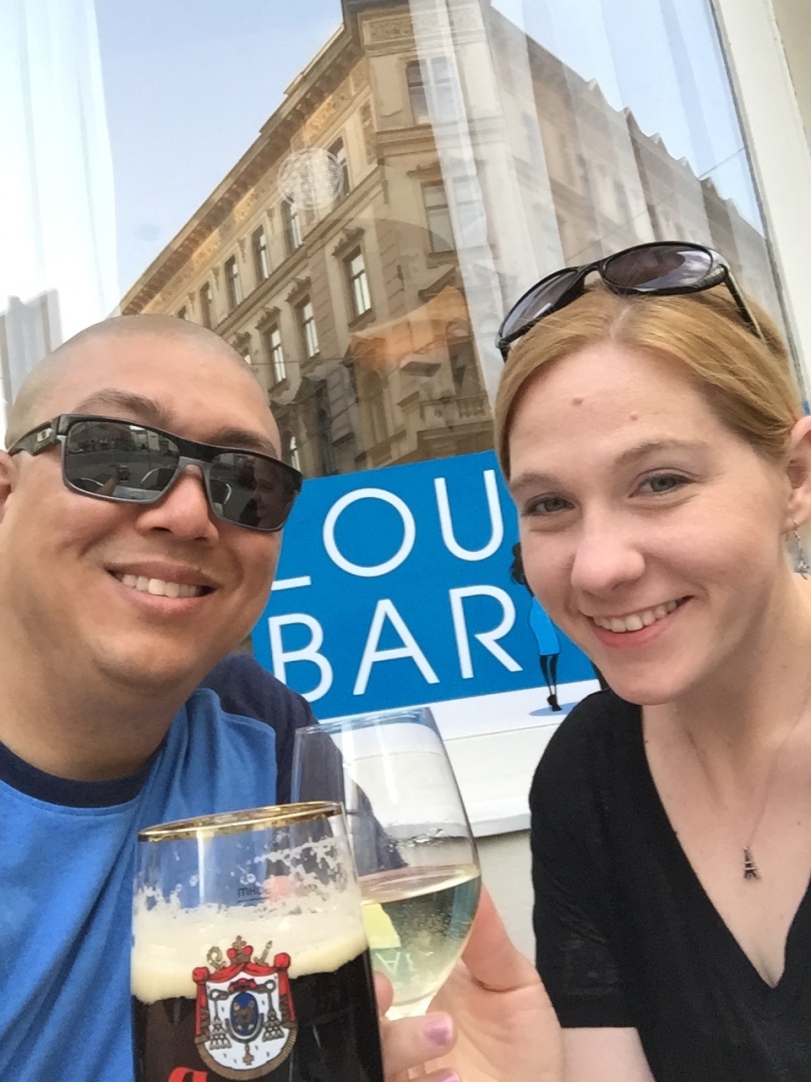 Enjoying a relaxing afternoon at a cafe

The Prater is a huge entertainment complex

Time to take a ride!

Group shot before heading on the Ferris wheel!

These are what the cars look like on the Ferris wheel.

View of the Prater

The next day was a plan to hit all of the highlights: Stephansplatz, shopping on Graben Street, Peterskirche (actually one of my favorite churches – it is so beautiful inside!), and a stop at the famed Cafe Demel to finally have a Sacher Torte, which is a traditional Austrian cake. From there, the street automatically takes you to the Hofsburg Compound, before following Ring Road to the Staatsoper, Museumquartier, Parliament, the Rathaus and finishing with the Votivkirche. We split up again at the Staatsoper (Opera House), and met up that night at an Irish Pub near our apartment. Here’s where Vienna turns fun and memorable. We were having such a good time – reliving our 2013 trip to Ireland, when we all started coughing really badly and were pretty much convinced someone pepper-sprayed the bar. Undeterred, we found a fun gay bar right by our hotel and ended the night dancing with drinks. This was maybe the best part about Vienna. The next day, we moved on to Salzburg, which is a great little town.

St. Peters – I love this church!

It is so pretty inside! 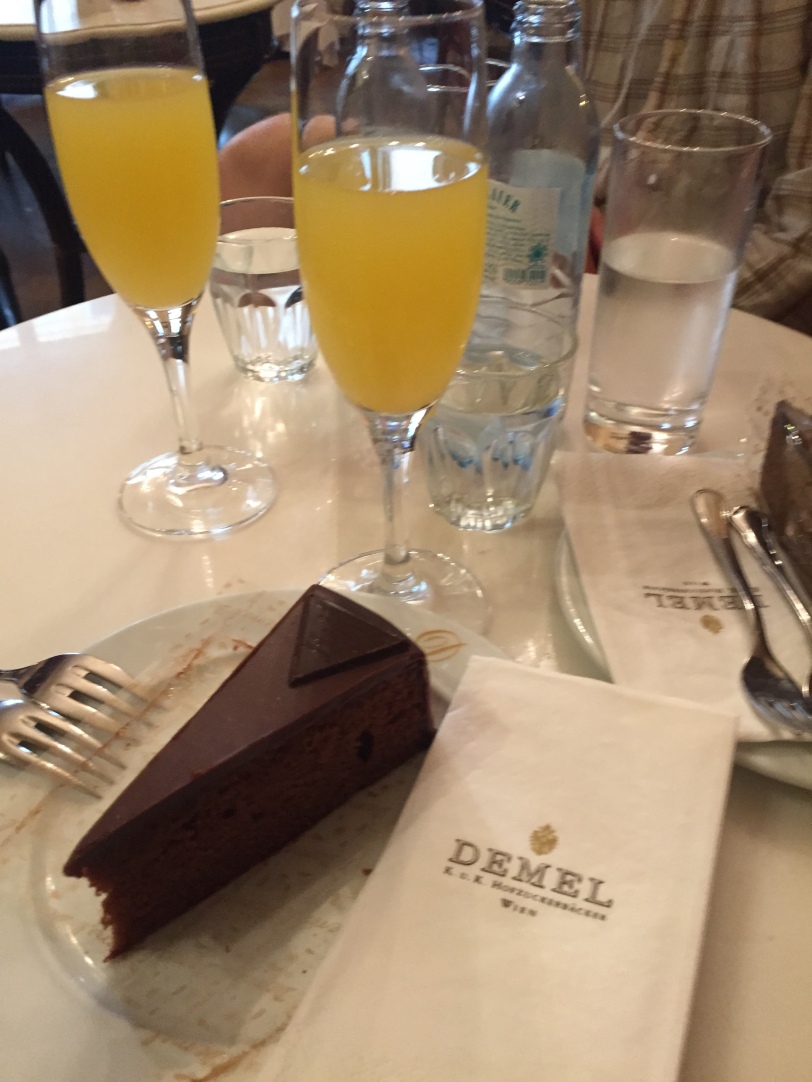 Right down the road from Demel was the Hofsburg 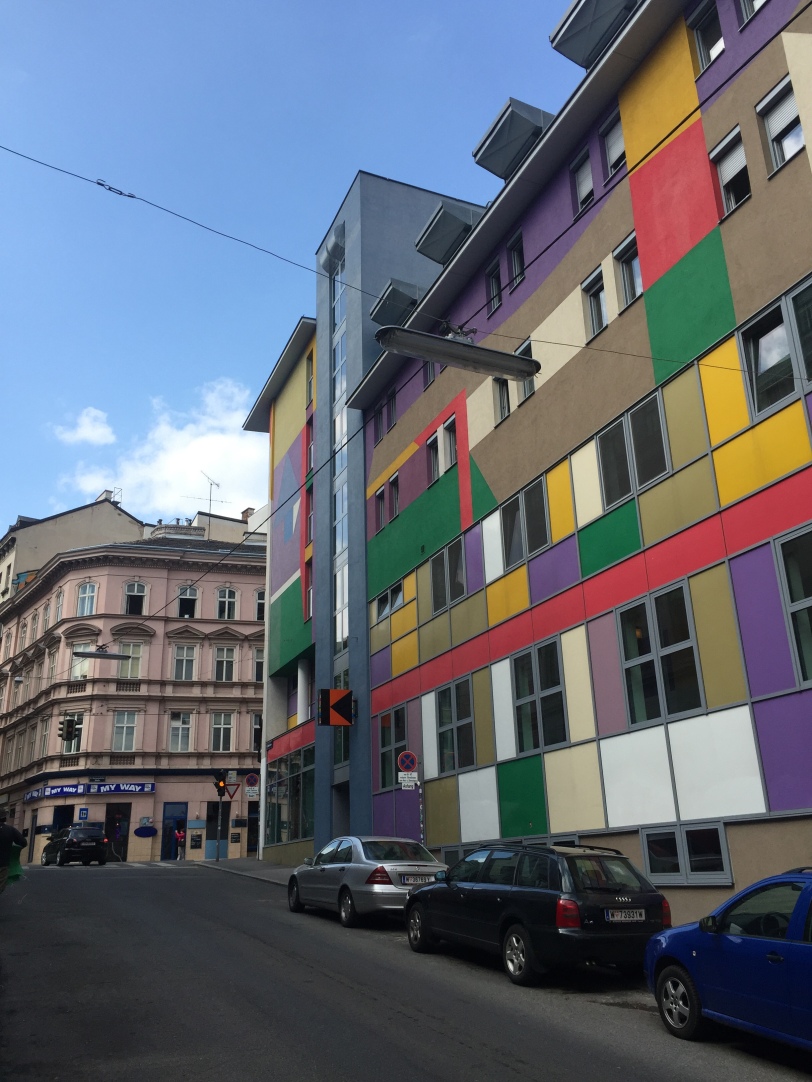 It was hard to miss our hotel 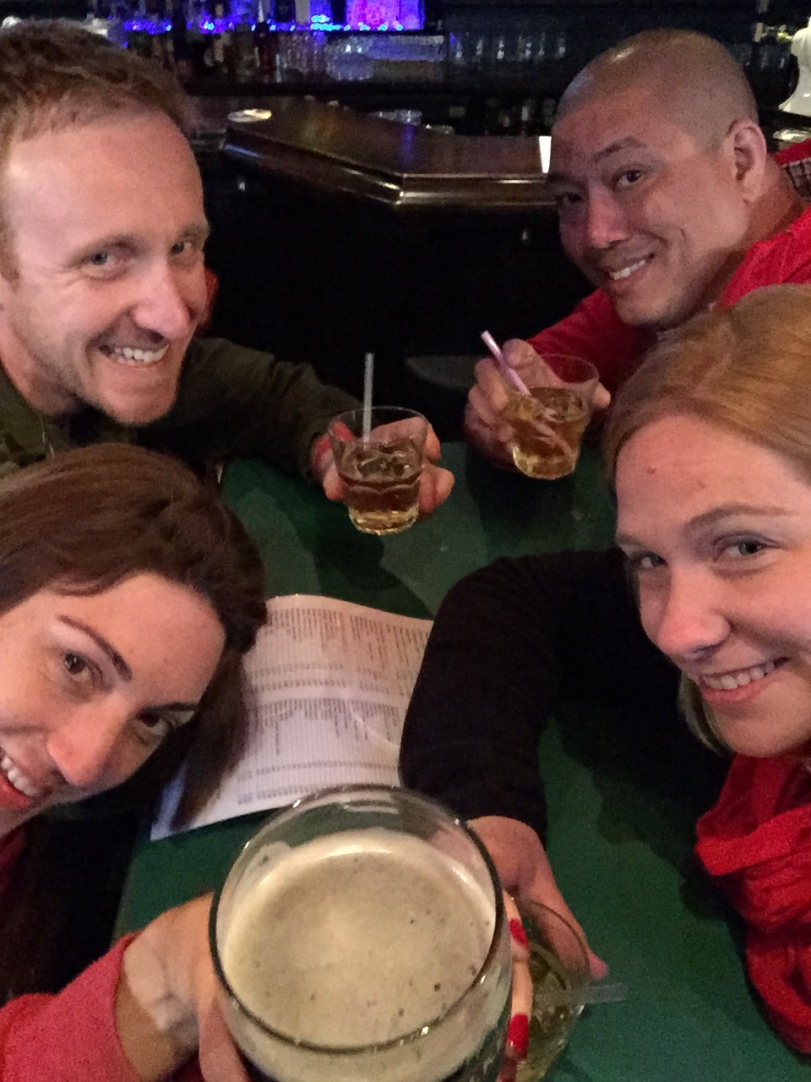 The group at the Irish Pub!

Final Impressions: Knowing now, what I didn’t realize then, is that we should have done the trip in completely the opposite direction. We should have started in the direction of Vienna and then moved to Budapest and Prague….because after those two cities, Vienna is expensive and dull and just boring. (Please don’t throw things at me!) One of the hardest questions we are routinely asked is what our favorite trips in Europe have been, while one of the easiest is what cities didn’t we like. And I know it’s an unpopular opinion, but Vienna is in the latter list. It’s just, at the heart of it, a big city with some pretty pockets and historic buildings. With any place, though, it is of course the preference of the traveler and it is a favorite of many. I totally know my opinion is not a popular one, but I just find Vienna to be a bit stale and sterile. I thought so during my first trip there in 2013, reaffirmed it in 2014 and completely was sold on that thought during 2015. Trust me, I really, really, really wanted to like it…but it’s just not my type of town.