Where: Copenhagen, Denmark
When: October 2018
Hotel: Andersen Boutique Hotel
Why Copenhagen: In 2017 we spent quite a bit of time in the United Kingdom, and it seemed that 2018 was the year for Scandinavia, a place we hadn’t visited once during our first tour in Germany. Copenhagen had been on John’s list for a long time, and after Stockholm was such a hit (read recap here), when flights to Copenhagen dropped to very reasonable price, it seemed like the perfect time to go.

The Trip: Like many of our long-weekend travels, we arrived into Copenhagen late on a Friday, which didn’t leave any time for exploring that night. Getting from the airport into Copenhagen proper is incredibly easy as there is a train station in the bottom of the airport that takes you directly to the main station in town. Copenhagen is a super walkable town with most things quite close, and the proximity from the train station to the hotel made it a very easy walk when we got off the train.

Prior to arriving to Copenhagen, I read as much as I could (of course), and the glaring bit of information was just how expensive the country was. However, I had read the same thing about Stockholm, and the prices weren’t shocking (as compared to Iceland…but that’s for another post), so I thought maybe they were going to be comparable. To be on the safe side, however, I booked us a hotel with breakfast and with close proximity to a grocery store for snacks so that all of our money didn’t go to food. Which turned out to be key! Denmark is really expensive (more than Sweden!), so that should factor into planning.

The plan for the first day was to head out to the Little Mermaid as it sits north of the town center, and make our way back in. It was a 50-minute walk from our hotel, but since we would be walking back, we saved our legs and hopped the train to get out there. Now, I had read that the statue was small, and not worth it, but I grew up with the Little Mermaid movie and as cheesy as it was described, I was not going to miss it. As it turns out, it is small and lots of people crowded around to get a picture (even early on a Saturday), but it is the start of a REALLY nice walk back into the town, so I say it is worth it.

He actually really was shushing me…and I was only whispering. 🙂

Made it to the Little Mermaid! I completely forgot that I had gotten a mole biopsied just days before, so all of my pictures from Copenhagen have a bandaid in the middle of my forehead in them.

This actually makes the statue look much bigger than it is.

Copenhagen is a very walker and biker friendly town, so it was no surprise that the path back into the city was super nice along the water. From the Little Mermaid, we headed to the Kastellet, a star-shaped 17th-century fortress, through the Langelinie Park, and back to the waterfront park. As it was mid-October, the fall colors were so pretty and it was just a really nice, relaxing walk. It also affords views of the famous Copenhagen Opera House, whose construction costs are at the top of any in the world, and it an easy entry to  the Amalienborg complex of palaces where the Danish Royal Family live. Getting around in the town itself by foot is quite easy as the layout isn’t hard to navigate (which is good for me, because I am terrible at navigating!) Just beyond the complex is arguably the most famous and recognizable area of Copenhagen – Nyhavn, the very pretty and colorful port area. It was once a commercial port but now is bustling with restaurants, bars and cafes and is the starting point for many canal tour boats through the city. The good news is – filters may have been used in photos of this area, but they weren’t necessary. The buildings are super vibrant. Be warned, however, because of the tourist draw, the restaurants are even more expensive (if possible), so possible plan for a treat meal here, or pick up a hot dog from one of the vendors nearby (which is what we did). 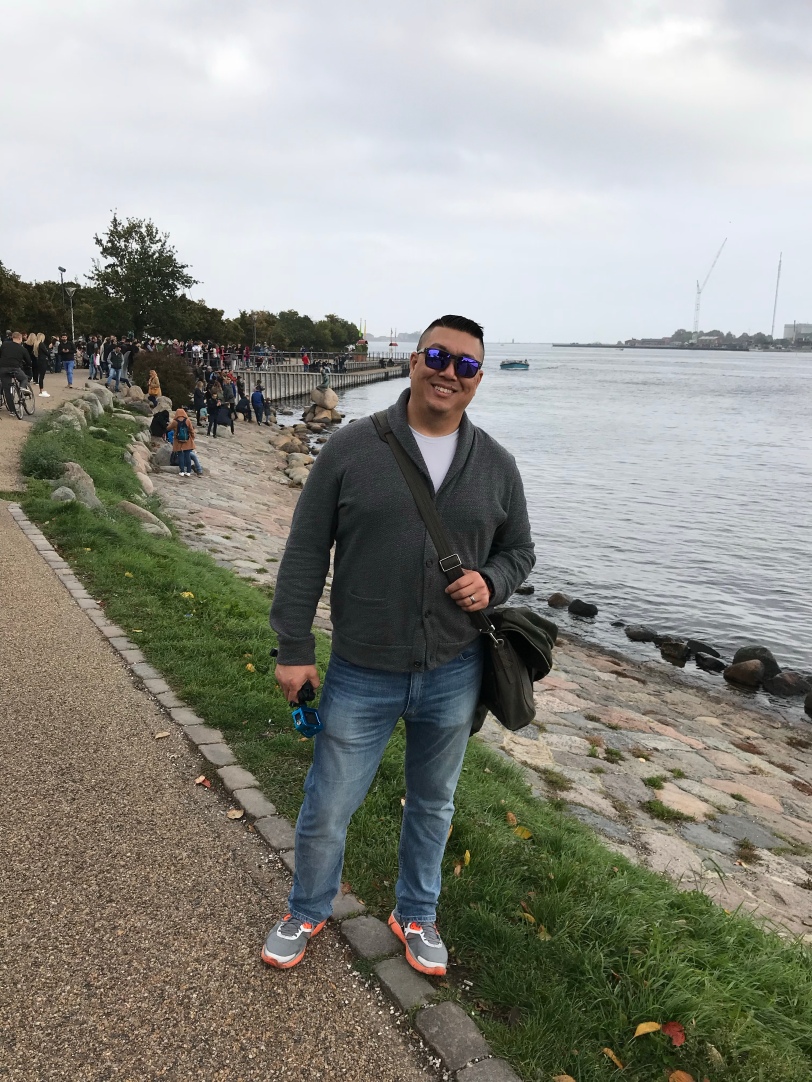 If you look closely, the Little Mermaid is over John’s right shoulder 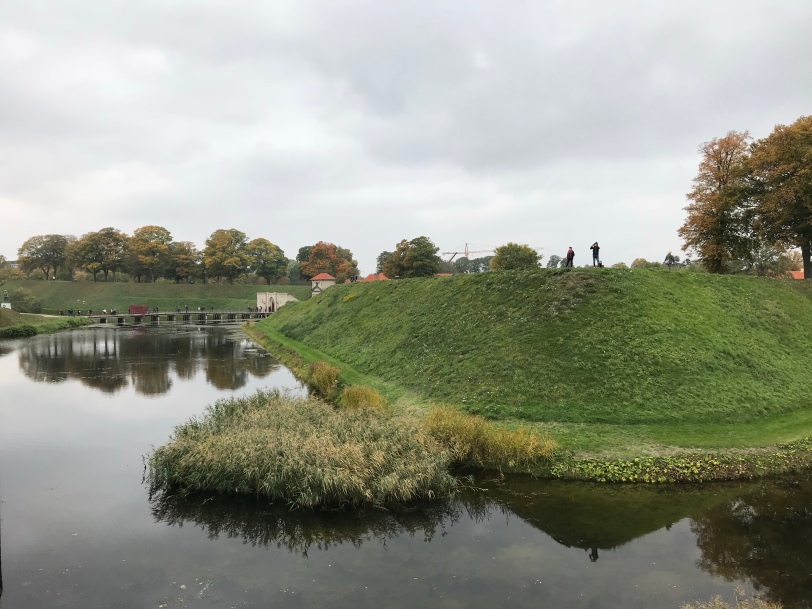 Looking at the Kastellet 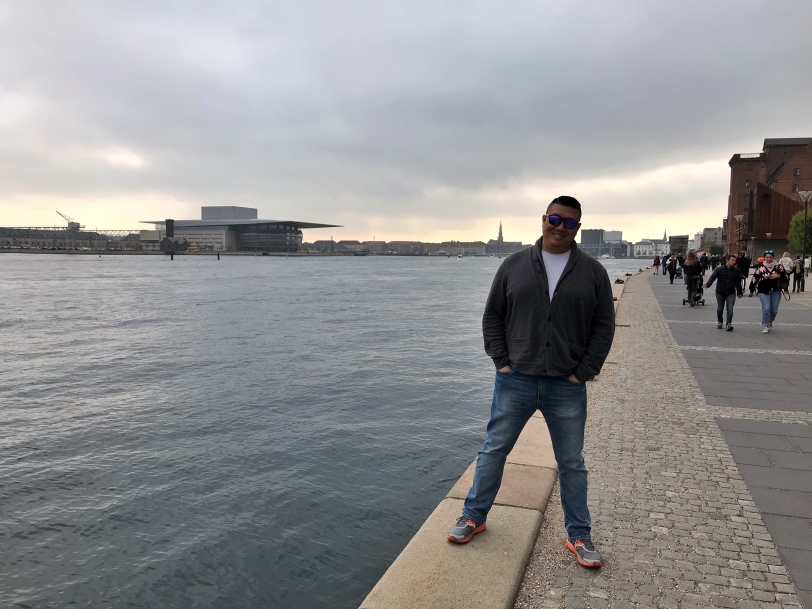 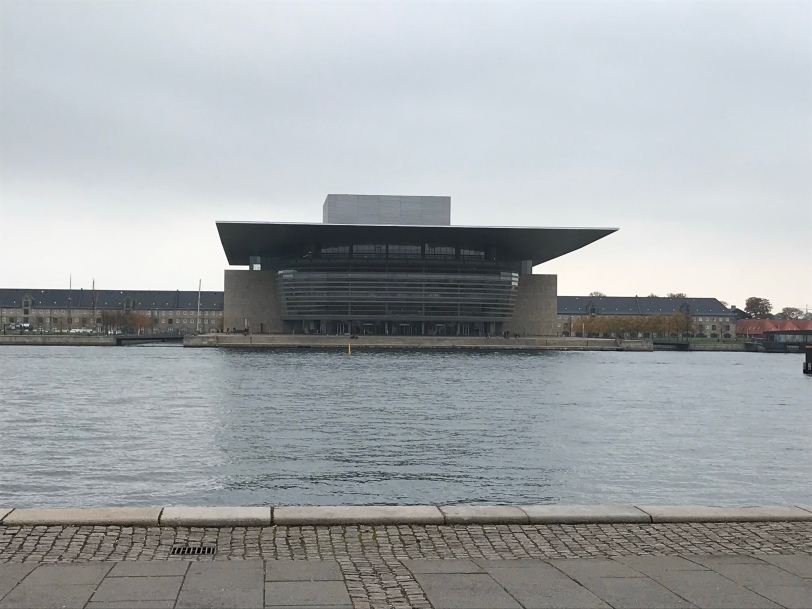 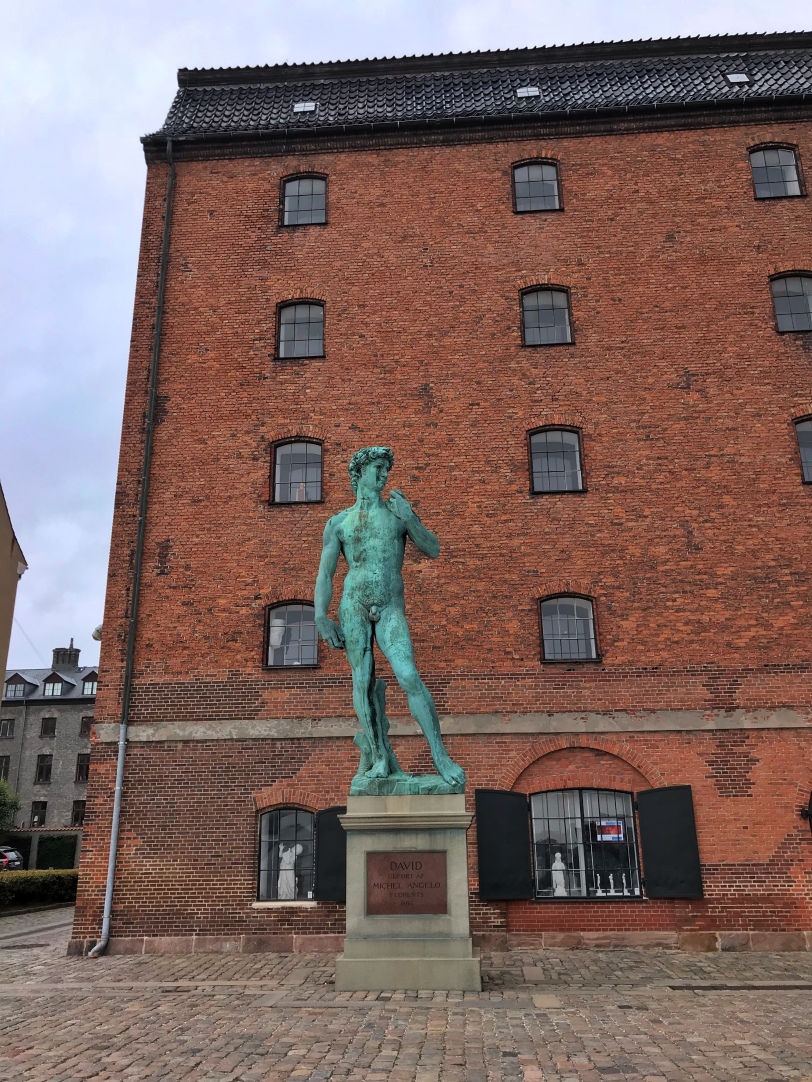 Was not expecting to see David!

Amalienborg Castle Complex – the stone buildings are all palaces 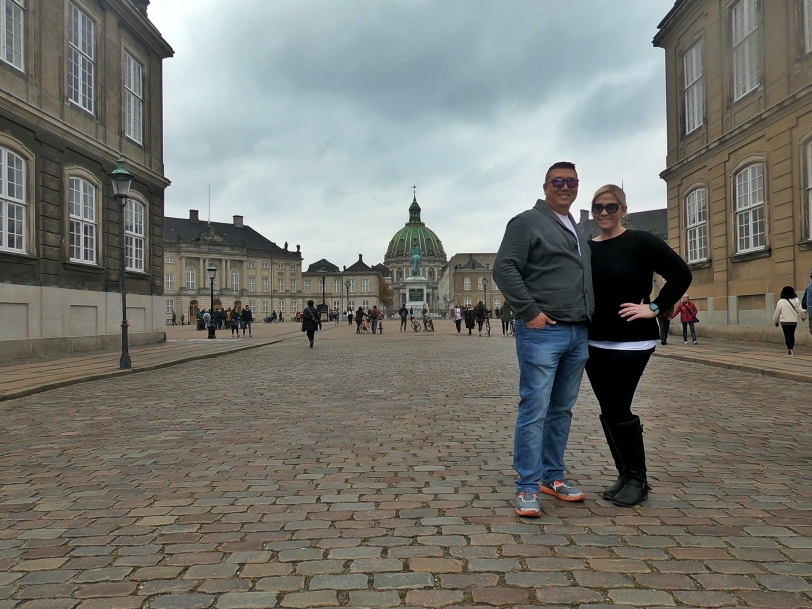 Heading into Amalienborg with the Marble Church dome in the background

One of the palace guards 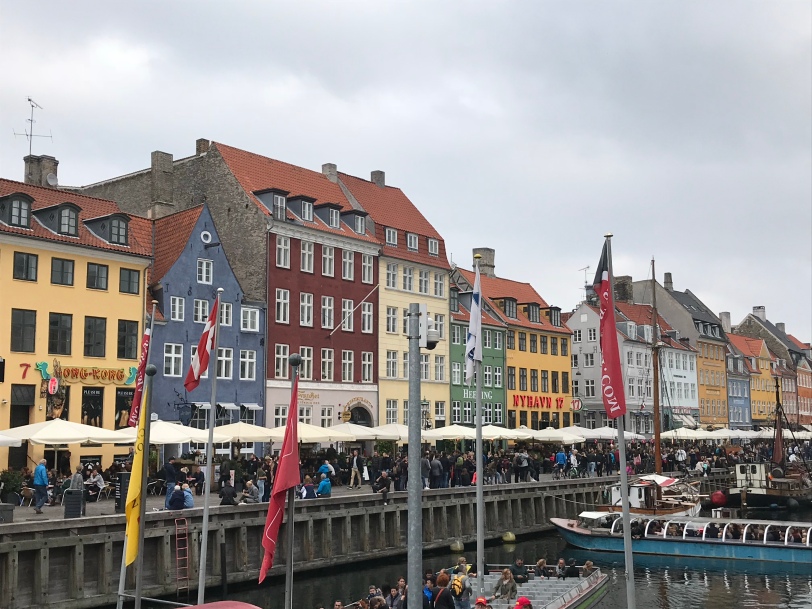 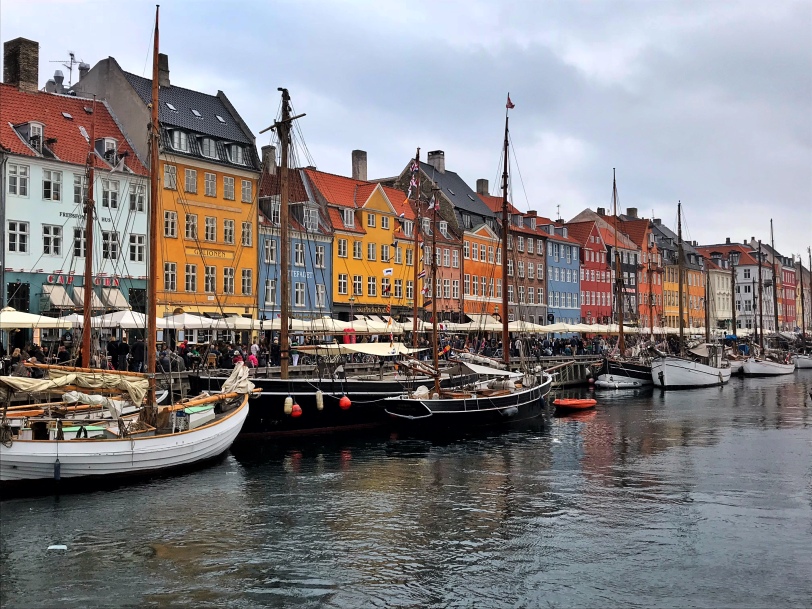 We jumped on an abandoned boat for this picture!

Super popular, even in chilly weather 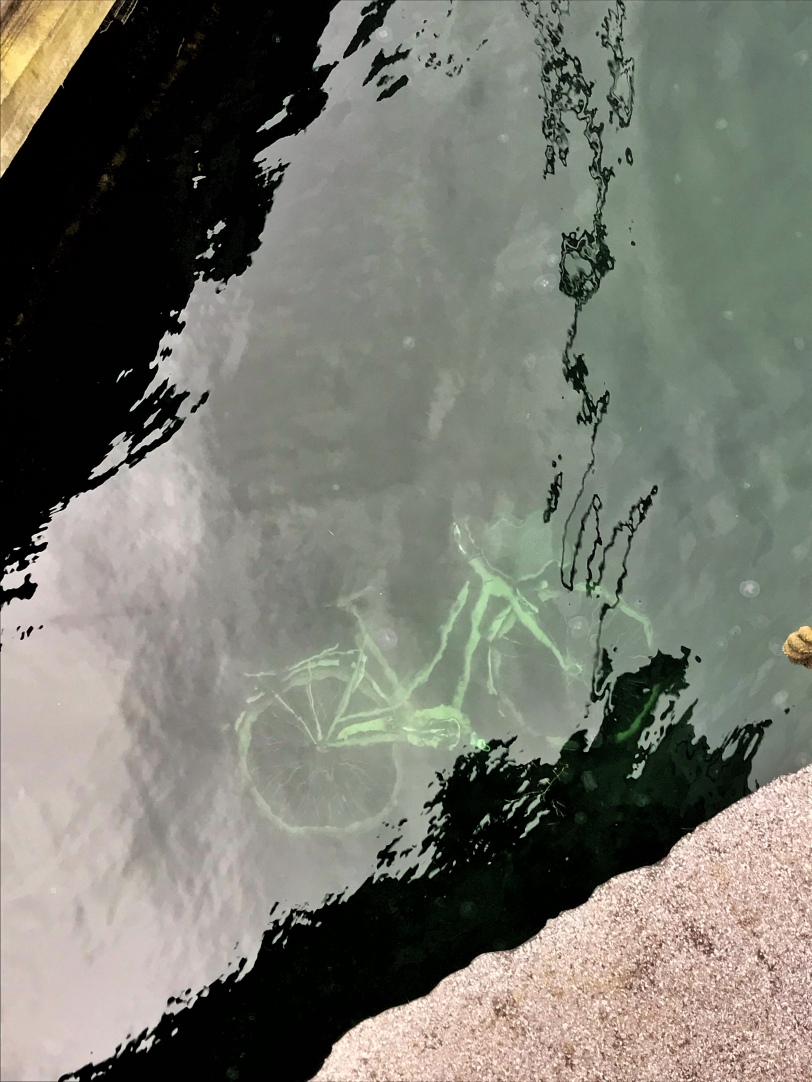 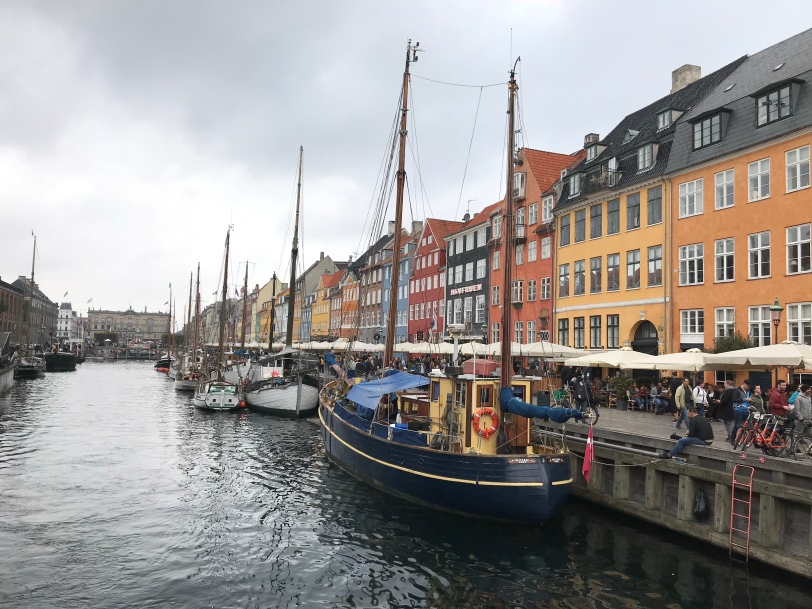 The other side of the canal

From there, we took a stroll down Strøget, the pedestrian zone and shopping area. It, along with the one in Heidelberg, is one of the longest shopping streets in Europe, and in addition to the shopping has a lot of tourist attractions throughout. It definitely took us some time to make it back to our hotel as there was a lot to see and do (my favorite was the lego store!)

Our hotel was located in the Vesterbro neighborhood, former meat packing district turned hipster hangout, but it was crazy cute. It had “prizes” on each level for folks that took the stairs, and my favorite – the wine Hygge hour. Hygge (pronounced “hooga”) translates to creating a warm, cozy time, and is a mainstay in Danish culture. The lobby had comfortable couches and oversized stuffed bears and created a cozy place to relax. The Hygge lifestyle is definitely not so bad. 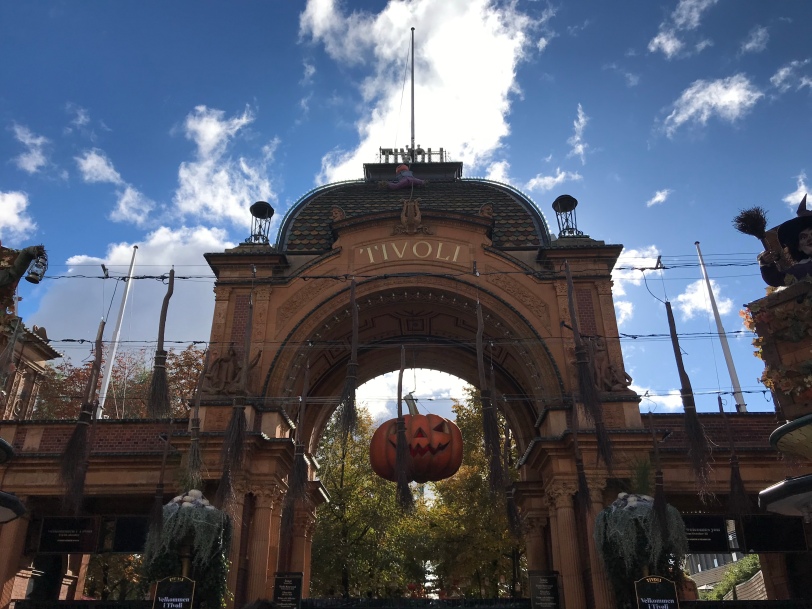 The entry to Tivoli Gardens…sad we couldn’t go in!

The Lego Store was super fun…and gave me the chance to get on a bike in Copenhagen! 🙂

Hans Christian Andersen, the famous fairy tale author, is Danish, and his statue is right in the main square of Copenhagen.

He also sits right next to Tivoli Gardens.

The Copenhagen City Hall on the main square

I love this feature in our hotel – such a cute idea!

The Giant Bears to relax with during Hygge! 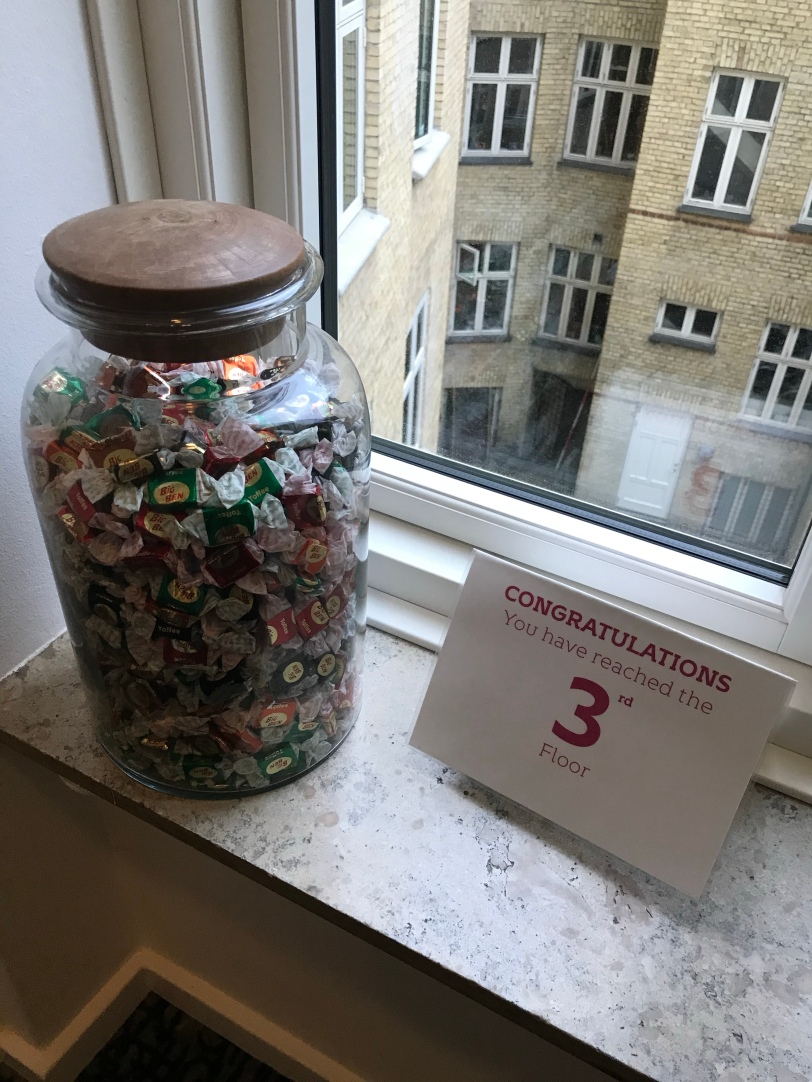 These features were adorable!

This hotel was so great – and the people so friendly!

Sampling the reds and whites – those were some pours!

Our hotel recommended we go to this collection of restaurants in old warehouse buildings but they were packed! Copenhagen has so many food halls, and we found the Tivoli Food market and ate there. Tivoli Gardens is a major attraction in Copenhagen, but  it was sadly closed for the season. I was super bummed we missed out on it as it look so cute!

The next morning we headed down to the Rundetaarn, or the Round Tower. It was built in the 17th century as an observatory, and has a great observation deck at the top. The best part – no stairs! Just lots of circling to the top. It has beautiful views over the town, and is definitely a must-see.

I didn’t plan the route to the Round Tower very well – it took us right by a comic book shop that we were in for quite awhile!

The aptly named Round Tower

Little benches to relax on! 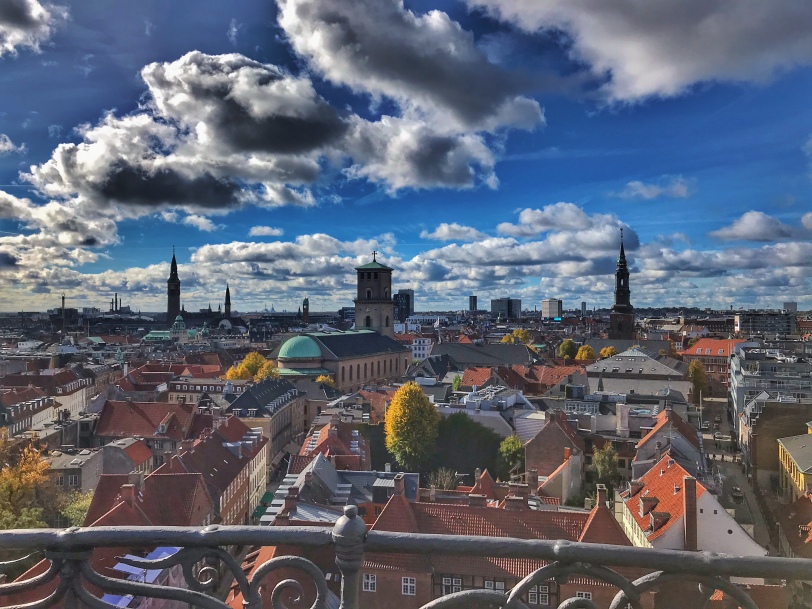 Another church available for climbing (but only on non-windy days!)

The church attached to the tower

If there’s a good viewpoint, we will definitely find it! 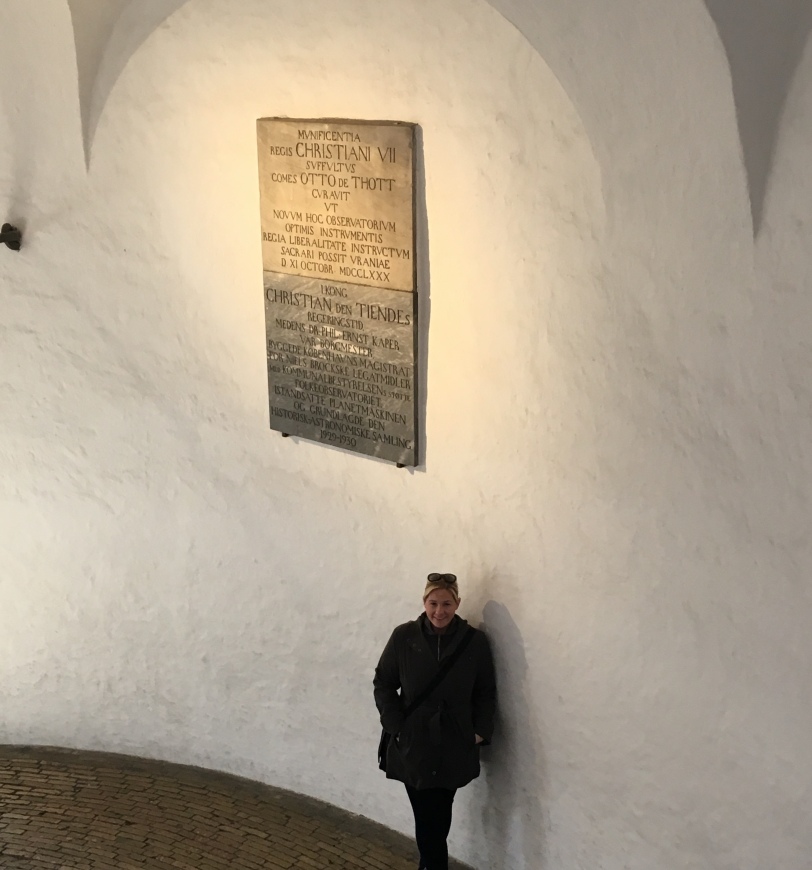 From there, we were going to walk to Freetown Christiana. This is by far, the weirdest place in Copenhagen. And to be honest, I didn’t totally feel comfortable there so we didn’t stay long. It was established in 1971 by a bunch of hippies who settled in to abandoned military barracks. They set their own rules – to include selling cannabis, which is against Danish law. Since its creation, there has been tension between the government and the close to 1,000 residents in Christiana, but it has remained relatively stable the last few years. It is a hodgepodge of homemade houses, eateries, art shops and an entire section dedicated to selling weed. You can take photos everywhere but that section as it is still technically illegal, but even taking pictures felt a bit uncomfortable. Other rules include no running because it could mean a police raid and incite panic, and no weapons or violence. The discovery for John and I was that we are not hippies and living in a commune is never going to be on the list of things to do.

Walking one of the streets in the Pedestrian area

Looking back to the Round Tower 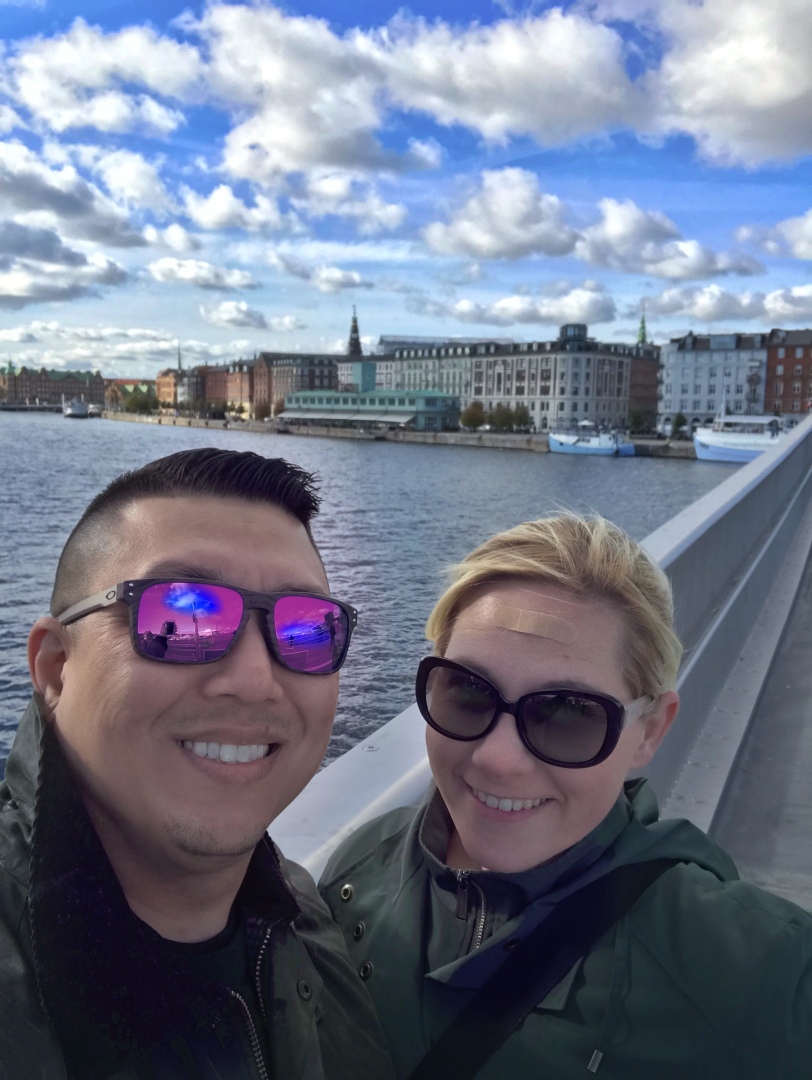 Christiana sits on its own island, so you have to cross a few bridges to get there – this was the best part of the trip there. 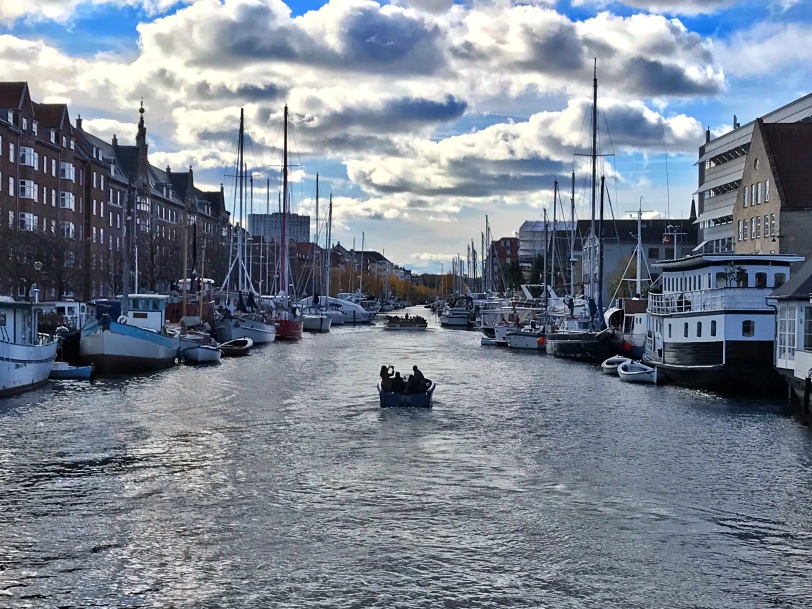 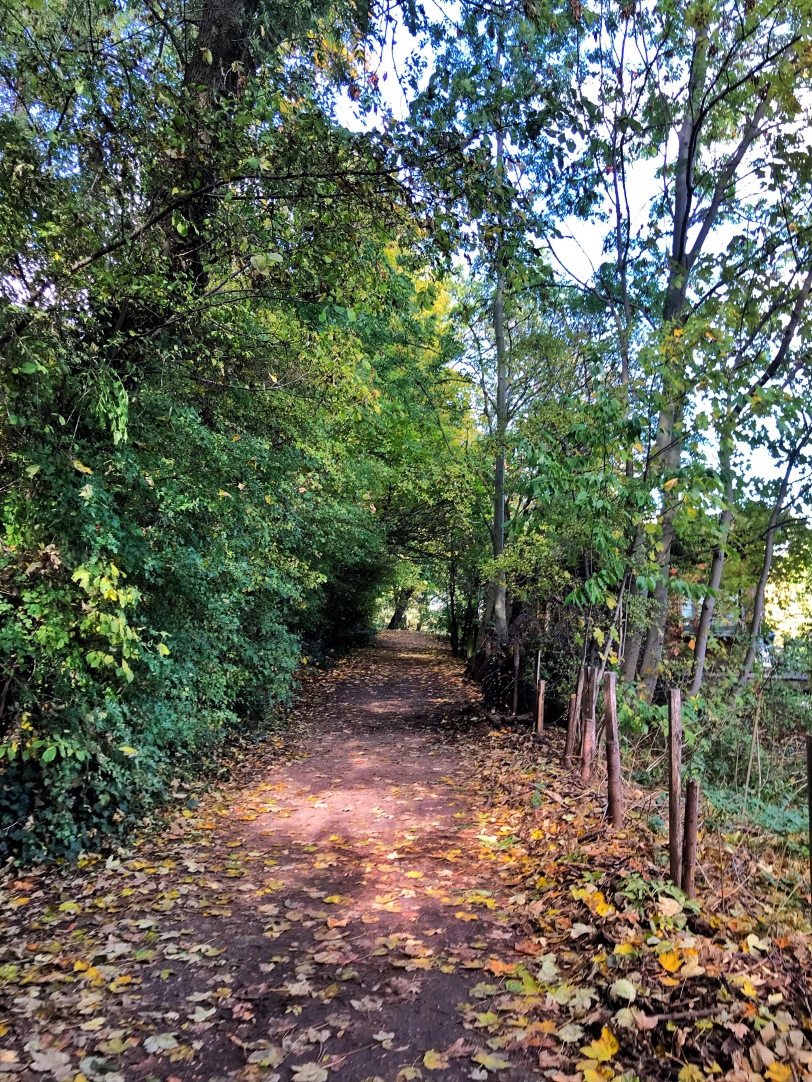 I got us a little lost (terrible at navigation!) but at least the walk was pretty! 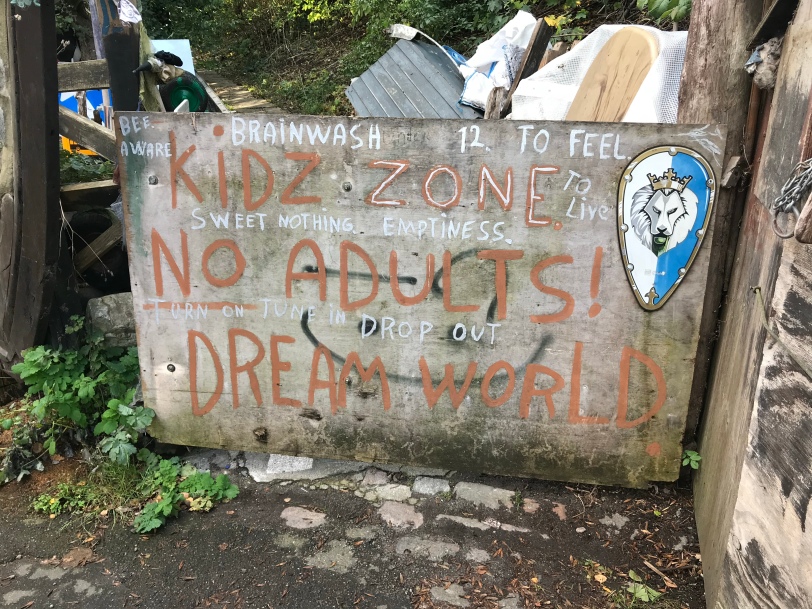 I would NEVER let my kids play here.

The murals were cool though. 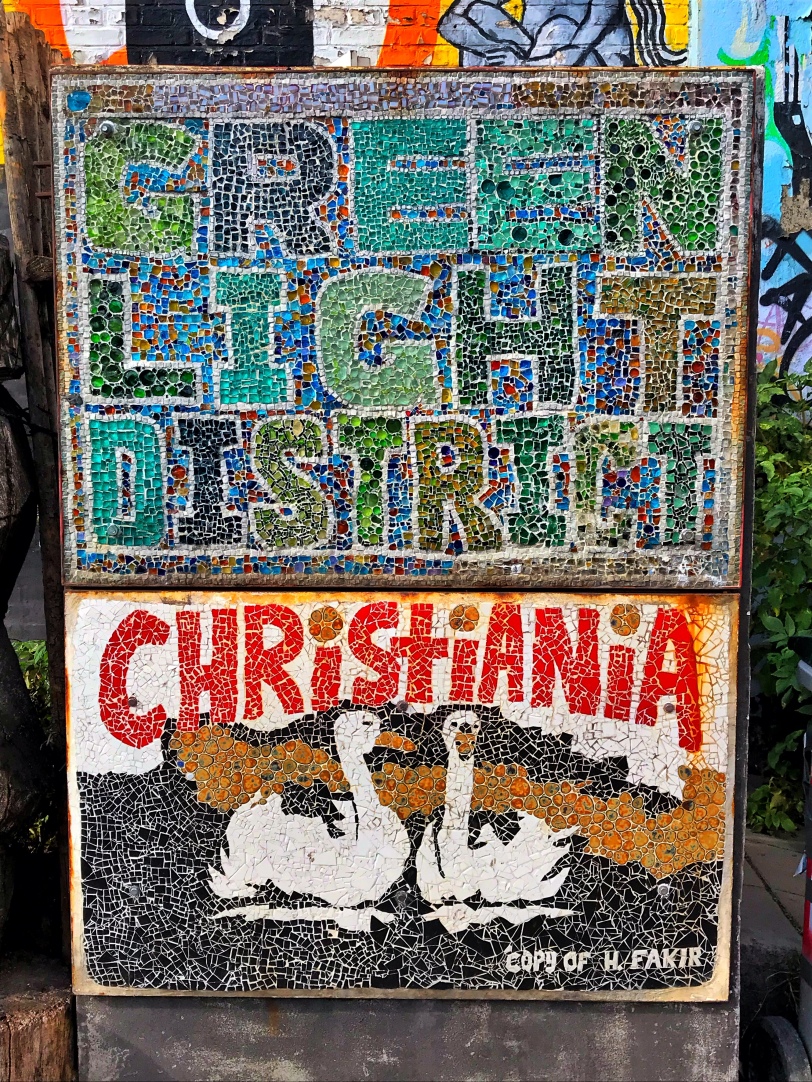 We walked very quickly through this area – I did not trust our luck that this wasn’t the cops would bust in.

The entry to the Green Light District

One of the restaurants

My favorite part, honestly, was the walk to and from there. Copenhagen is a really pretty city with cool little pockets of colorful buildings and interesting looking restaurants. It’s a great place to wander because you’ll just happen upon a fun neighborhood and want to look around more. We had an early flight the next day, so we turned in early after one more Hygge wine hour!

Church of our Savior

Walking over bridges and canals – this one was one of my favorites with the vibrant colors. 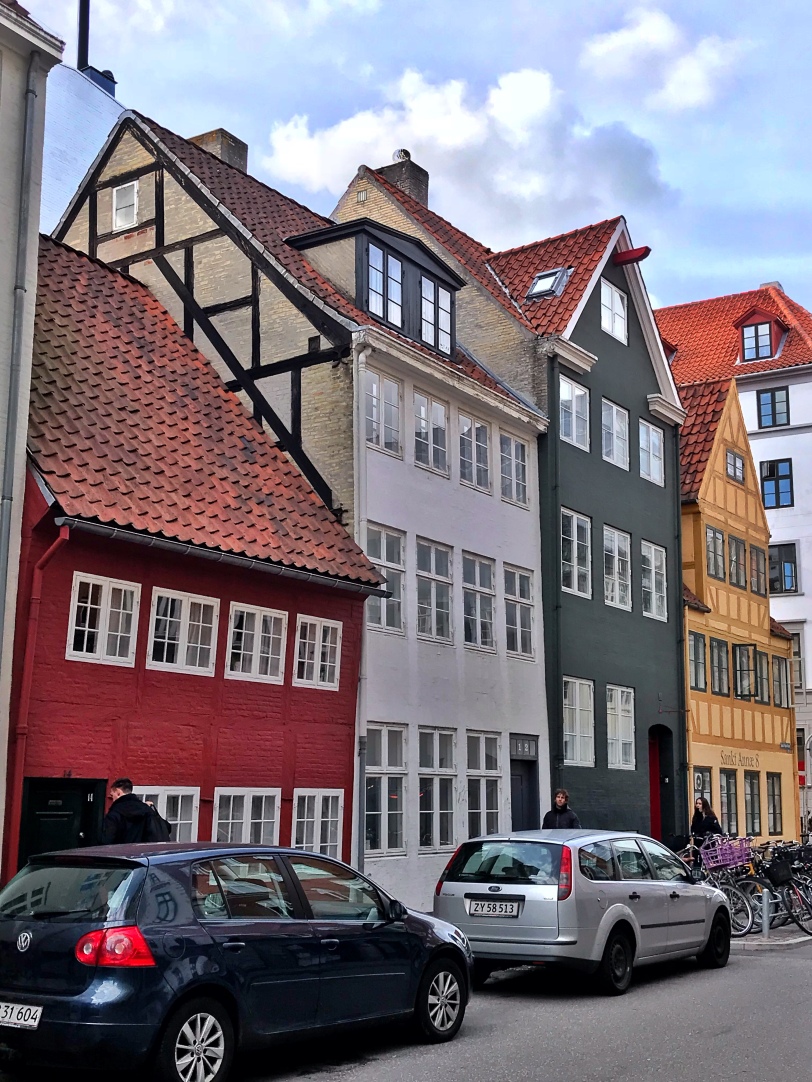 I loved the quaint houses! 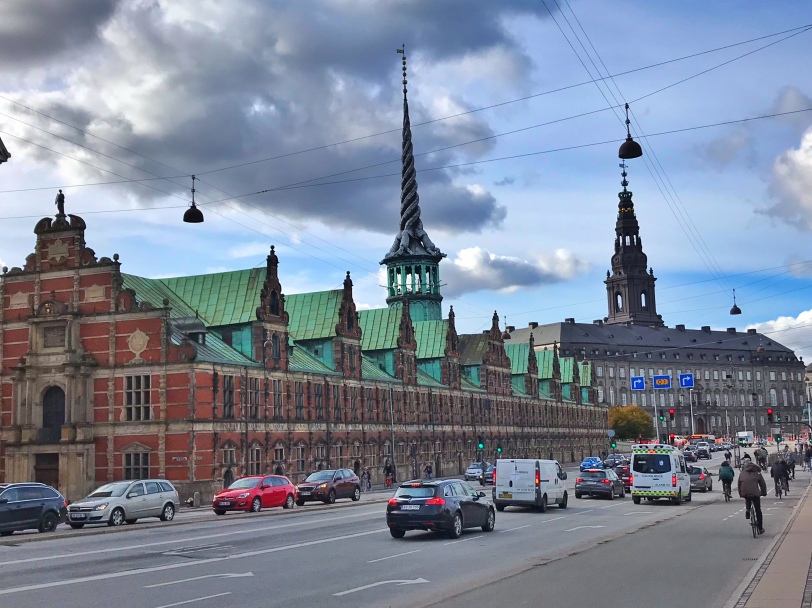 The Chamber of Commerce building with the Christiansborg Palace behind it. 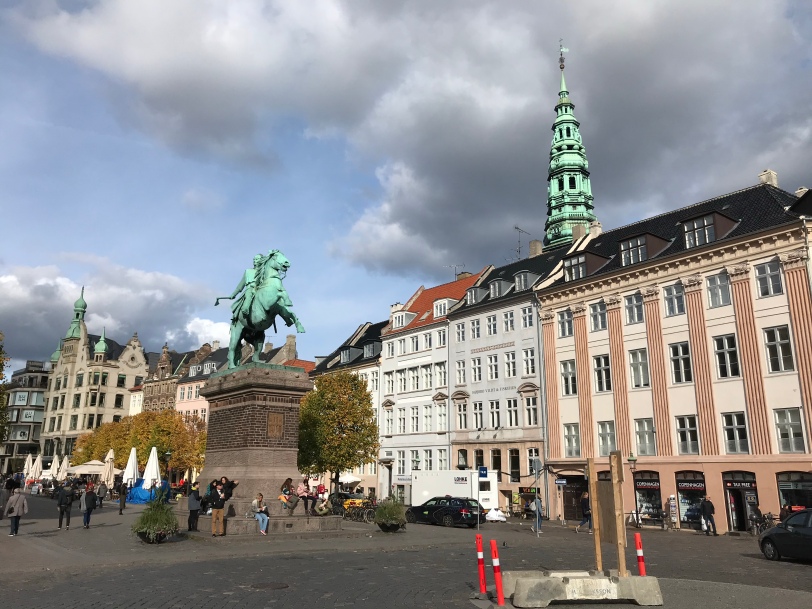 The large square that leads to the Pedestrian shopping street

So many cobblestone streets!

The Trip: Copenhagen was a fun place to walk around and only needs a couple days to really get the feel of the city before it would be time to wander out and explore more of the city. I still enjoyed Stockholm more – just in terms of things to see and do, but Copenhagen definitely deserves a visit. There are ways to budget – but definitely know it is still going to be more costly than any Eastern Europe country and most Western and Central locations, and that should definitely be a factor when planning your time.