Where: Stockholm, Sweden
When:  July 2018
Hotel: Hotel Hellstens Malmgård
Why Stockholm: Full disclosure – we went to Stockholm because it was the only city that wasn’t sold out of tickets to the Ed Sheeran show in minutes. I’m not kidding. I was looking for tickets in Munich, Zurich, Warsaw and Stockholm because they all had weekend shows. And the only Ticketmaster site I could get through to ticket selection was Stockholm’s. I now can say it was “divine intervention.” It’s take over five years to get to Scandinavia…which was, in hindsight, way too long.

The Trip: I should have known it was going to be a good trip when I was offered a 40E upgrade to business class deal for our flights. (Hint – spend the money…totally worth it!) It led to a very relaxing trip to Sweden, which was nice after an exceptionally stressful couple of weeks at work.

The first order of business when starting to plan any trip is figuring out the best way to get from the airport to our hotel. Arlanda Airport is about 45 minutes by car outside of Sweden, but everything I read said to NOT take the taxis because even the registered ones are outrageously priced. The next option was a bus…which I tend to try to avoid if possible. The third option was the Arlanda Express, which is only a 20 minute ride but at a cost – it was about 3x the price of the bus. However! There was a huge deal online that cut about 70 percent of the cost for two people…so obviously the choice was a no brainer!

Landing in Stockholm after 11 p.m.

Tired, but excited to be in Sweden!

It was close to midnight when we finally got to the hotel after a switch to the local train at the main station and a four minute walk to the hotel (trains in Stockholm are clean and efficient…staying near one will save time and money!) So our first night was basically get to the hotel and sleep. 🙂

It took awhile for me to figure out where we should stay in Stockholm. Gamla Stan is the popular old town, but at a price. I chose a hotel in Södermalm, which was described as the “trendy, hipster” area. The location near a train was key and the price was much closer to what I was interested in spending. On that note…all I had heard, prior to coming to Stockholm, was how expensive it was…but honestly, after Iceland (to be discussed in a different blog), anything seems cheap. And with the exception of the hotels, I really didn’t find the prices all that outrageous.

I had booked this trip over a year before we actually went, so I didn’t really try to do any planning before then. I did not know at the time that I would get insanely busy at work and with my master’s classes and be unable to properly plan. A quick glance at some personal blogs and an online travel book, told me that we had to see Gamla Stan, the oldest neighborhood in Stockholm, we had to spend some time on the water, we had to look around the same neighborhood we were staying in, and we had to see the subway stations. We were limited on time given the concert and our late flight Friday/early flight Monday, so I did something I never, ever do – I bought the Stockholm Pass with the intent to use it for the Hop On, Hop Off boat tour. It turns out, it paid for itself! (Nothing against the Hop On, Hop Off…it’s just usually not our thing!)

We walked through Gamla Stan on our way to the water to hop on our boat to visit the Vasa Museum. If you know John and me at all, we are NOT museum people, and it has to take a very special museum to get our attention. Seeing the world’s only almost fully intact 17th century warship definitely qualified. We only had a short wait before hopping our boat (be careful which one you wait for – there are two, both red and pretty much with the same name!) Taking the boat was definitely the best idea. The views on the water were gorgeous and it was a great way to see all of the inner parts of Stockholm!

Our breakfast food was interesting…I stuck with toast! 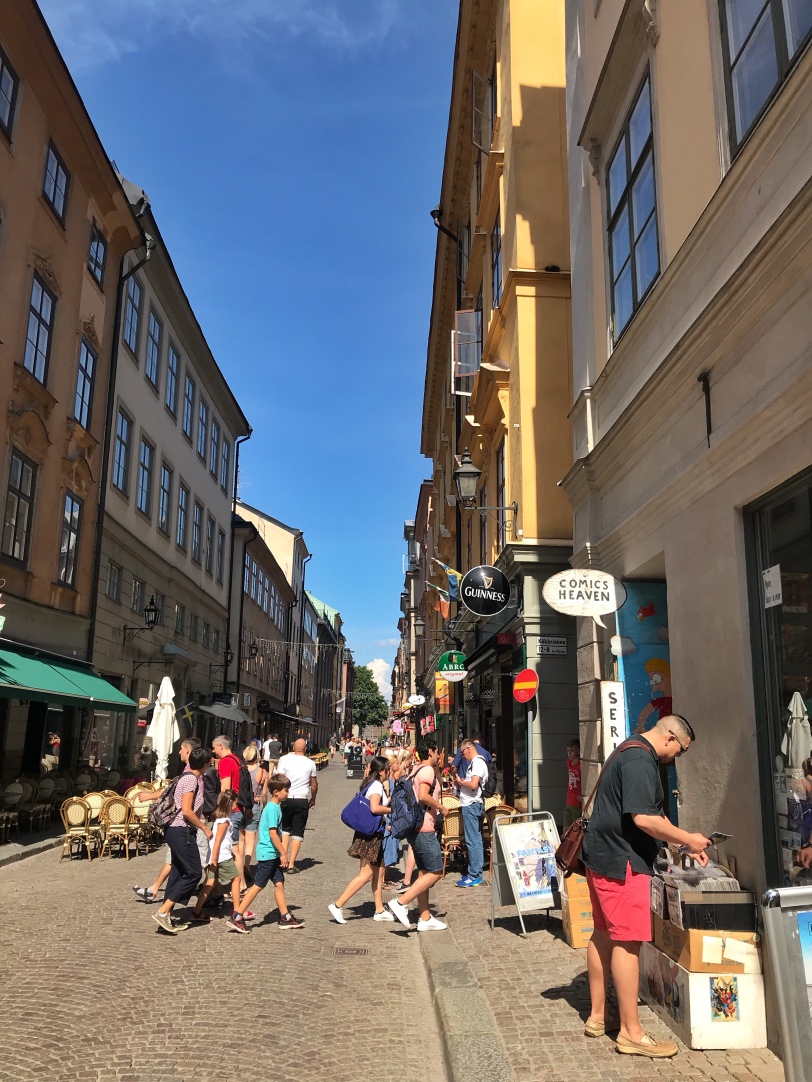 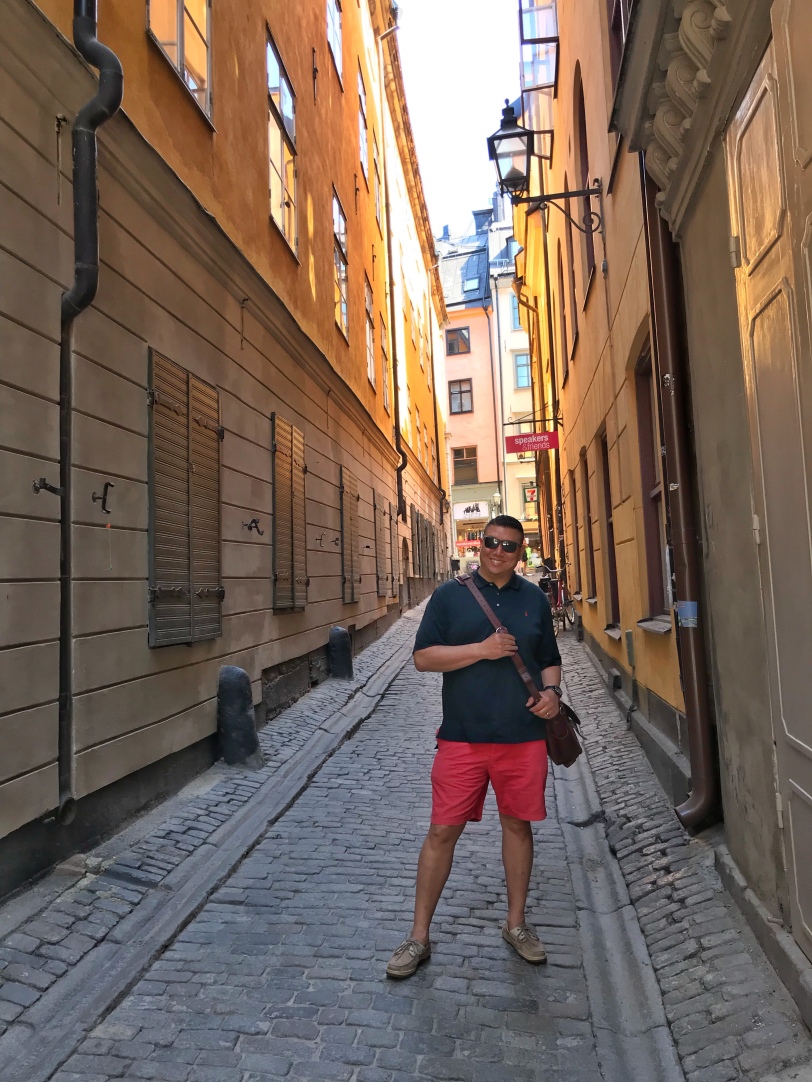 Lots of cute side streets!

Heading down to the water!

Stockholm is a network of a bunch of little islands, and the Vasa is located on Djurgården, along with Stockholm’s amusement park, Grona Lund, and the Nordic Museum.

We spent almost two hours in the museum. It is so well done – you can view it from about five different levels (and you want to see it from all of them). In addition, they have an area where you can watch how they raised it (which was truly impressive), and a place where they display the skeletons found along with stories based on research. It is well worth the visit.

Heading to the Vasa museum! 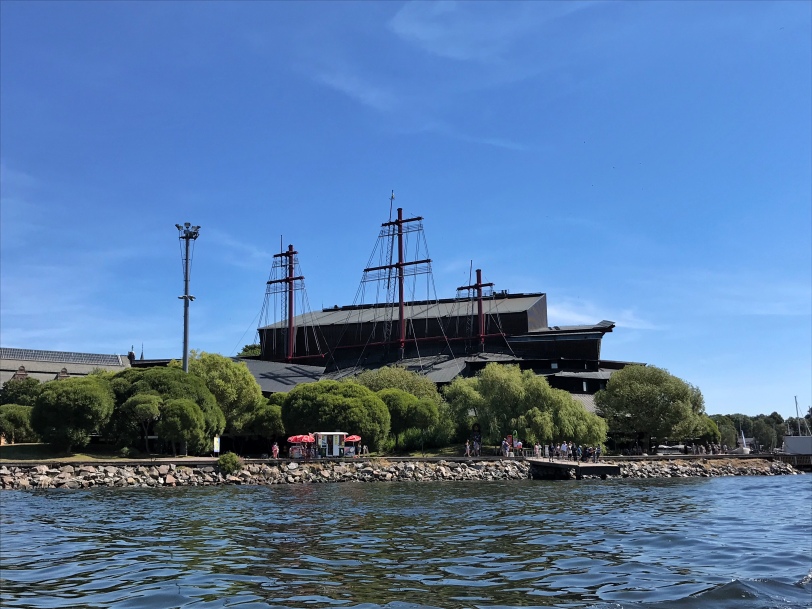 The Vasa Museum from the water

Waiting for our next ride.

After the museum, we decided to ride the boat around until it stopped on the island where we were staying. It was a wavy ride the closer we got out of the bay and closer to the Baltic Sea…so it was a good thing our stop wasn’t too far away! Södermalm, the island where we stayed, offers the best views of Stockholm…which comes at the cost of lots of stairs! 🙂

We made our way back to our hotel (by way of Starbucks…of course I needed my mugs), but we were drawn in by the Mexican food sign. Now, we’ve been burned a couple of times in Germany by so-called Mexican food, but the tacos and the margaritas were pretty close to the real thing! 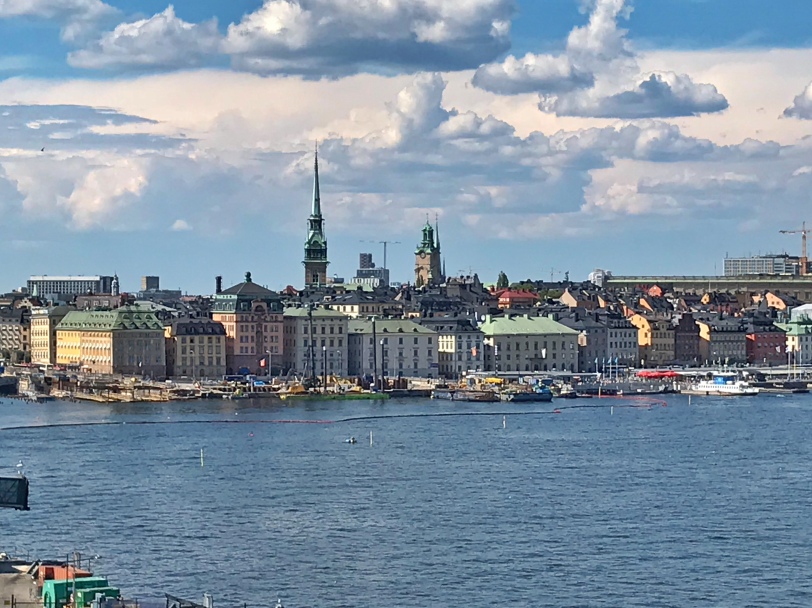 Lots of stairs, but worth this view of Gamla Stan!

At the top of the stairs.

Walking back to our hotel.

That night, we made our way to Ed Sheeran – who is fantastic in concert and definitely worth seeing if you get the chance. The even happier surprise is that we hit two of the subway stations I really wanted to see after the show. Solna Centrum, the main stop to the concert was this insane red design. It almost looked like fire – so very, very cool. 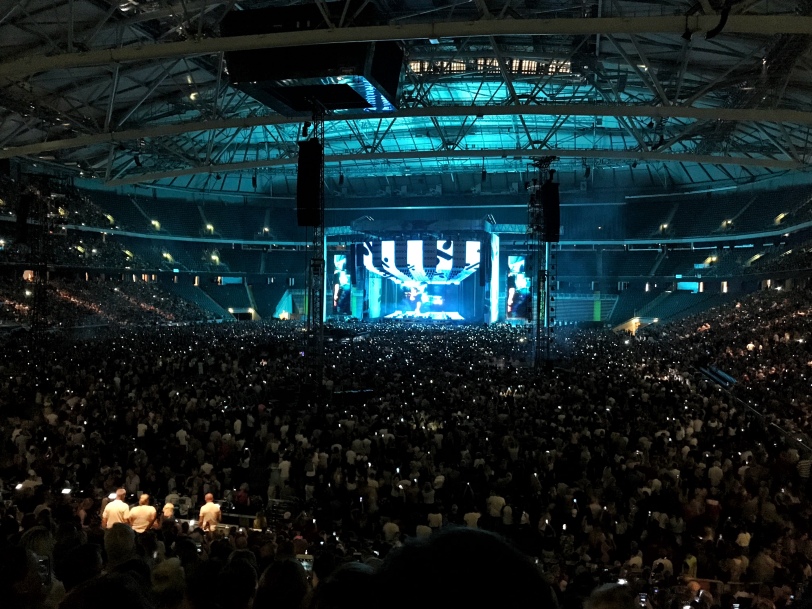 The subway stations are crazy cool. 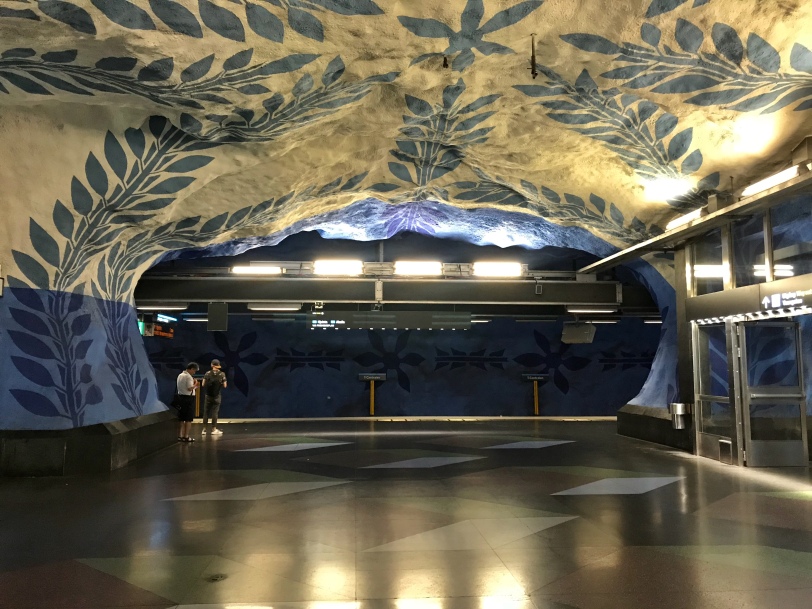 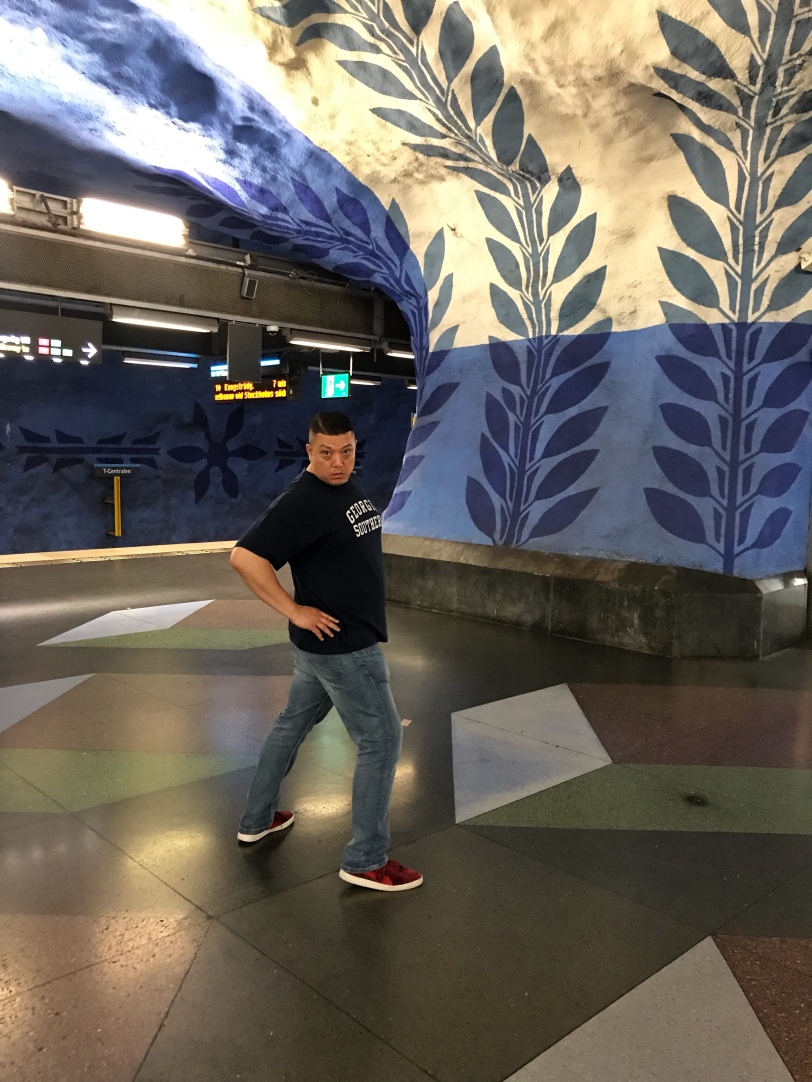 I can’t take him anywhere.

We slept in a little longer than expected the next day and while visiting Drottningholm Palace was on the initial agenda, a very friendly barista told us it wasn’t worth it if we didn’t have all day to spend there. It takes an hour one-way to get there and the last ship of the day was at 4 p.m. We decided to just take the Hop On, Hop Off bus around and see all of Stockholm. We got off the bus at Norrmalm, a very trendy, commercial district (I found a Lululemon store!) We enjoyed the shade of the pretty streets and parks – Stockholm really is a pretty and clean city. It’s quite spread out, so you have to take public transportation between neighborhoods, but each neighborhood is worth a walkabout.

After riding the bus and walking around in the heat, we decided to head back to the hotel for a rest before dinner. We are definitely not in Georgia anymore – the Swedish heat wore us out! It was a good plan too, because we got to see another cool subway station on our way back!

The last thing I really wanted to do was walk up to one of the lookouts I read about for pretty views of Stockholm, and one such lookout was literally right around the corner from where we were staying. It was pretty hilarious – we asked the front desk clerk about the look out and she warned us that young kids liked to go up there and we should be careful. There were teenagers..with their fast food. And a family with a portable grill. Nothing at all I would consider unsafe. Maybe her warning was to keep the tourists out…either way, we were not in danger. 🙂 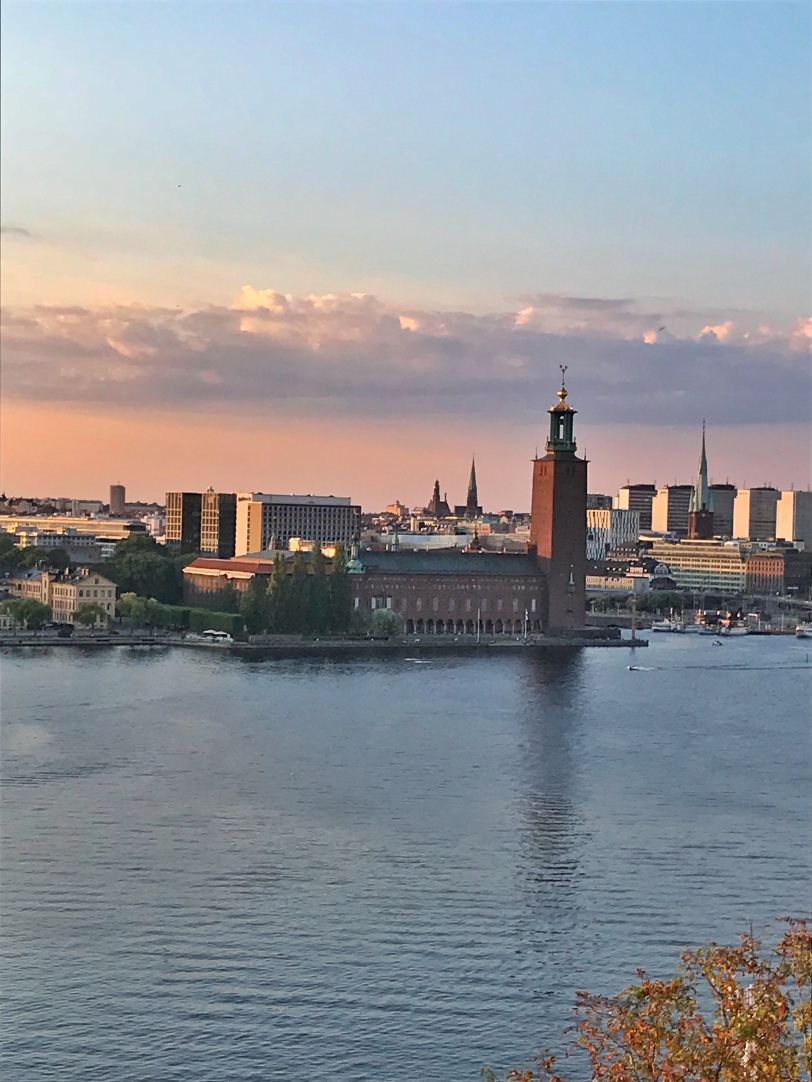 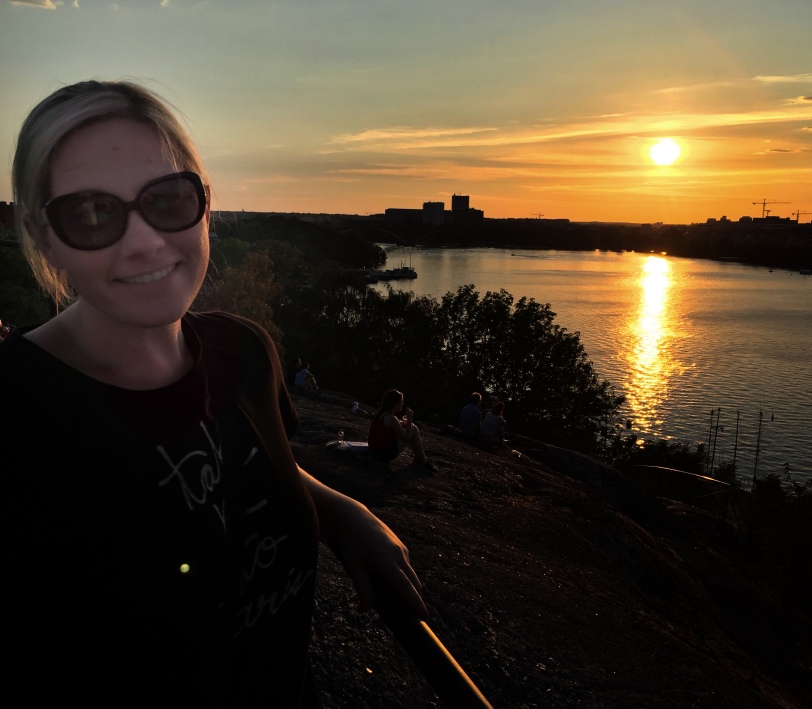 I love a good sunset 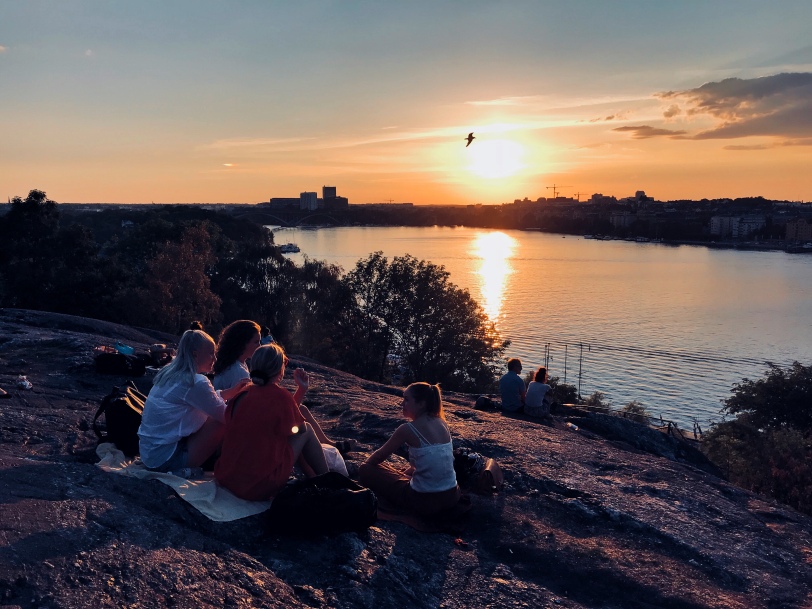 The cute street leading to the lookout.

We had a 6:15 flight on Monday morning, so we were up early…which even then was after the sun came up! We took an Uber to the main central station, then caught the Arlanda Express back to the airport. We left the hotel at 3:45 a.m…10 minutes before the official sunrise time, apparently.

Final Thoughts: We’re heading to Copenhagen in October, which, along with Norway, was pretty much the only Scandinavian location we really didn’t want to miss. Now, however, I can’t wait to explore more of the countries. Stockholm was a really pleasant surprise, and I’m so glad we sent two full days there. I would definitely recommend it.

Stockholm was a wonderful surprise!