Where: Helsinki, Finland
When: August 2019
Hotel: Hotel Rivoli Jardin (it sounds like it should be in France!)
Why Helsinki: Finland was the last Nordic country we still had to visit, and it is close to Tallinn, Estonia, so it would be easy to knock both of them out at the same time. The plan was to spend two nights in Finland and one night on Tallinn, which is honestly the perfect amount of time to spend in each place. Neither are very big cities, and it is not hard to see everything you want to in a short amount of time.

The trip: There were no direct flights from Stuttgart to Helsinki, which meant we did not get in to Finland until super late (11:30 p.m.), so there were no plans for a night walk that first night. Thankfully, Finland is a country that does have Uber, which is not present in all European countries yet. It’s not as cheap as a bus, but at that time of night, it was easier and less expensive than a taxi. Our hotel was in a super central location, right down the block from the Esplanade, a main park lined with shops that leads down to the water, but was tucked away enough to be quiet. And it had an adorable little courtyard to hang out in with a glass of wine if one wanted to.

Our hotel entrance – thankfully tucked away from the construction in the front.

Finland can often be found at the top of the list naming the world’s happiest countries. It’s the 8th most expensive country in Europe (and ironically also the 8th largest) but only has just under 6 million inhabitants. Helsinki itself doesn’t seem to get a lot of love in terms of tourists, as most folks seem to wait until the winter months to visit the Northern parts of the country for a glimpse of Santa and reindeer. It was definitely not crowded when we went, even though it was the high season for travel.

Heading out on the boat!

The white and orange tents are all market stands

The itinerary for us was light during the day – take a boat trip around the 330 Helsinki archipelagos (islands), and play it by ear if we wanted to get off at Suomenlinna, an 18th century sea fortress. Then, I had us taking a walk through two markets on the water, before heading inland to see the Church in the Rock, before heading past the Helsinki Central Station (for the architecture), the Senate Square, and down the Esplanade back to our hotel to rest up for the star attraction – a night at a Finnish sauna! It wasn’t an overly packed itinerary, so we wouldn’t be exhausted, but would still get to enjoy the town.

Our hotel had a great, and filling, breakfast – which is key in the more expensive countries – because if you are like us, that will hold us over until dinner with maybe a snack in between. We made our way down to the water, where we hopped on the Stromma – Sightseeing by Boat. The entire trip takes 90 minutes, and you go by the Suomenlinna, the Helsinki Zoo, the fleet of Icebreakers (those things are huge!), and some really gorgeous homes. The one thing that stood out to me was that pretty much all of the homes had a sauna on the water. After reading more about it, it turns out there are over 2 million saunas in for a country of 5.5 million. Crazy!!

So many big and little islands! 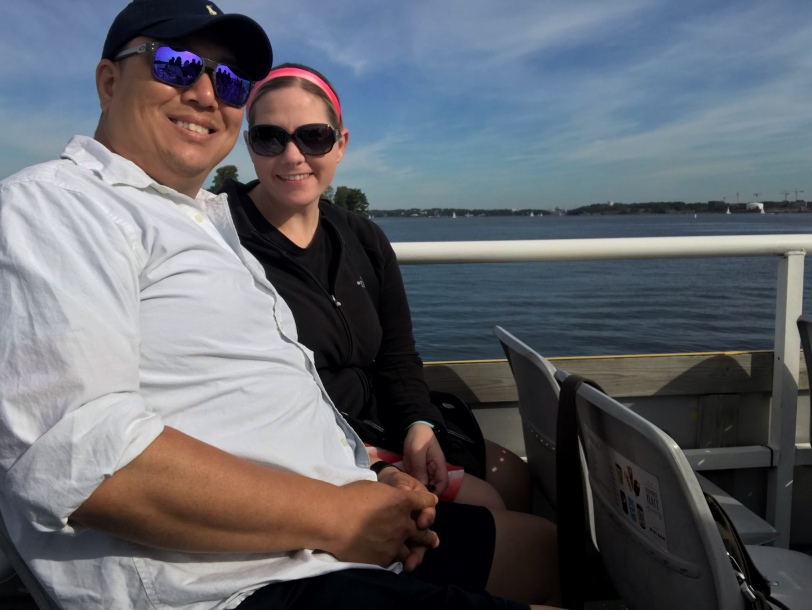 One of the many gorgeous homes. That little building by the water (the red one on the right) is a sauna!

So many boats were on the water

Not sure if there was a race, but it was super fun to watch these boats go by

I honestly thought this guy was going to tip over!

Poor Johnny – it got a little chilly on the water

SkyWheel Helsinki and the Uspenski Cathedral

Pulling back into shore

We wandered through the outdoor farmer’s market, the Kauppatori, before making our way to the indoor market, the Kauppahalli, which was ADORABLE! There were little, old-time wooden stands lining the inside and it was so fun to wander. Although there were a few too many reindeer food items for sale for my taste. Our next stop was going to be the Rock Church, so we hopped one of the cute trams for the trip out there. We had a bit if excitement as there was a medical emergency happening on the tram, but it was resolved quickly. On our trip out, the one thing that stuck out about Helsinki is how incredible clean it is!

This stand was not for me at all! 🙂

Inside the market – it was so cute! 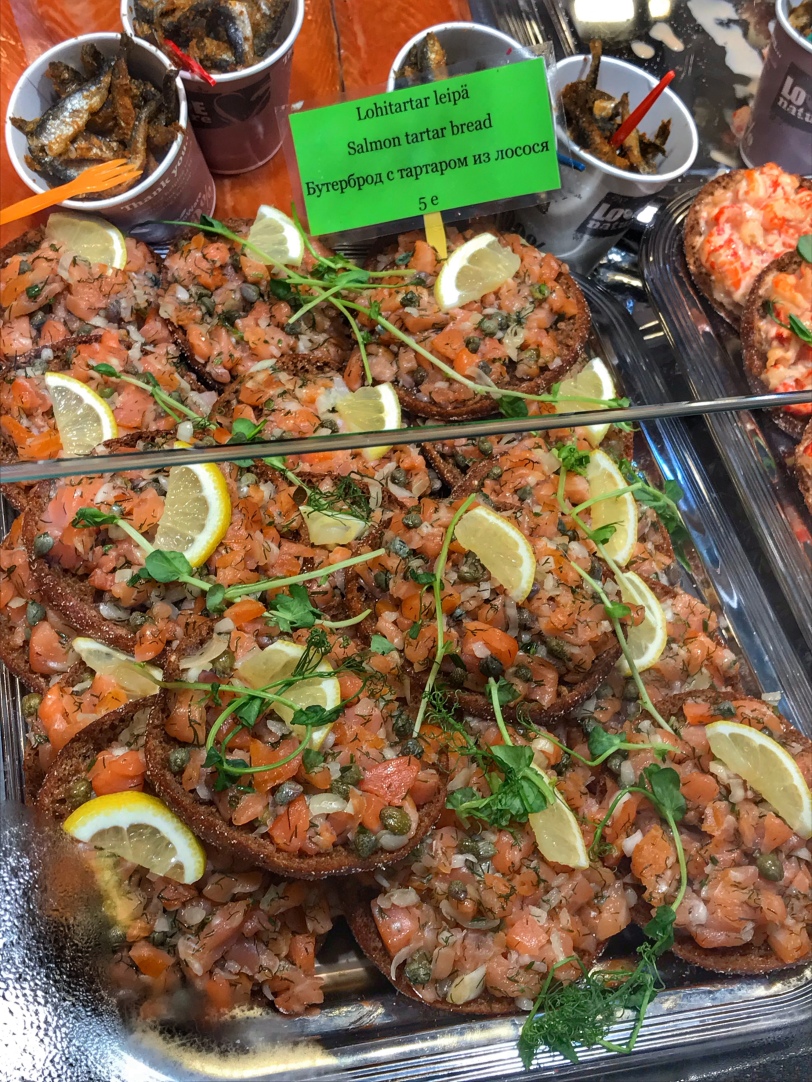 Finnish food wasn’t necessarily for me.

So much reindeer…I just thought of Rudolf the whole time!

Even the outside is cute!

The official name of the rock church is Temppeliaukion Church, and the way we walked from the tram station actually took us to the back of the church, and we climbed up the hill and the rocks around it, only to realize we were on the roof of the church! 🙂 We made our way inside (pre-book tickets! This is key, as always), and we were just in time. There was a wedding that evening so we only had about 30 minutes before they closed the church.

Right about now, we realized we were on the roof!

Inside of the church 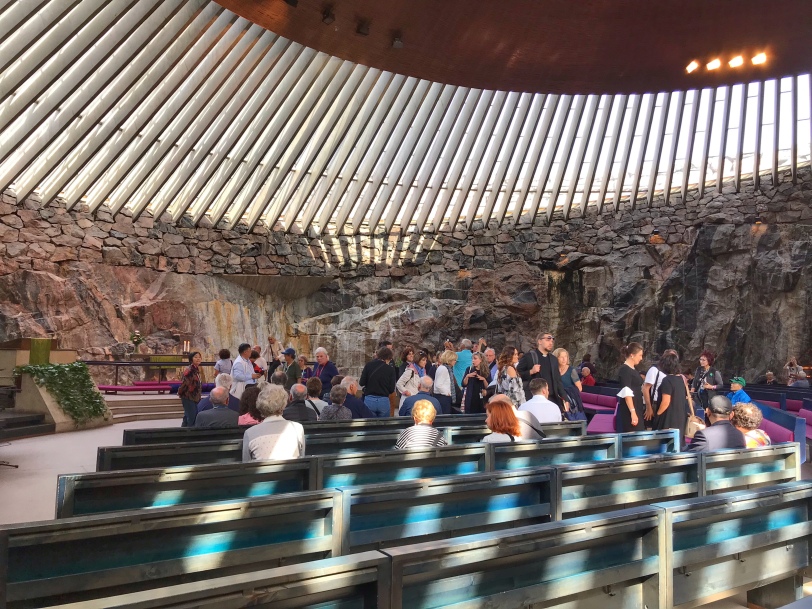 It’s actually smaller than it looked!

We found the entrance on the way out. 🙂

We wandered back to the center of Helsinki, and another striking thing about the city is how modern it is – but then you read about the history of Finland, and how the country had to revolutionize to pay its debts after WWII. Our next stop was the Kamppi Chapel, a contemporary church built for silent reflection. No pictures or talking aloud inside (I didn’t last long). It’s location is baffling as well – it’s a quiet chapel in the middle of a busy square with a lot going on. Definitely different, and worth a quick stop in.

The fun square right next to the quiet chapel

Helsinki trams are so cute!!

My husband is adorable…we stopped for a snack and he got mea unicorn milkshake.

Our walk continued past the Helsinki Central Station, whose design earned it the title of the most beautiful train station in the world by BBC. It’s got giant statues holding lanterns, and it’s almost daunting looking at it. We wandered through the cute pedestrian area, and up a steep hill (which was a bit unexpected) to the Senate Square and the Helsinki Cathedral, which sits so high up, it is for sure the most recognizable sight in the city. As we were there, they were setting up for a running race and I was hugely disappointed I hadn’t seen it was happening or I would have signed us up (John wouldn’t have been thrilled…but he would have done it. After that, we took in the sites of the Esplanade and back to the hotel for a quick rest. 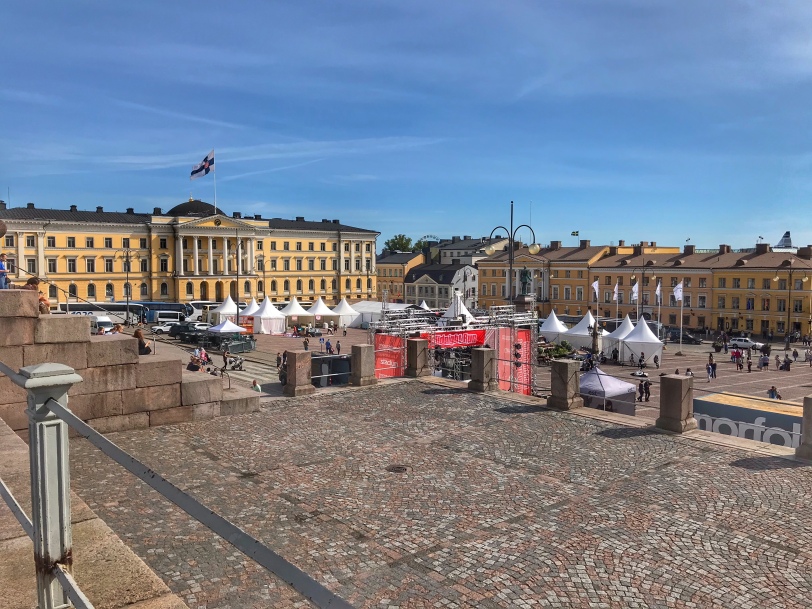 Senate Square, setting up for the race. The Grand Palace is the yellow building at the end. 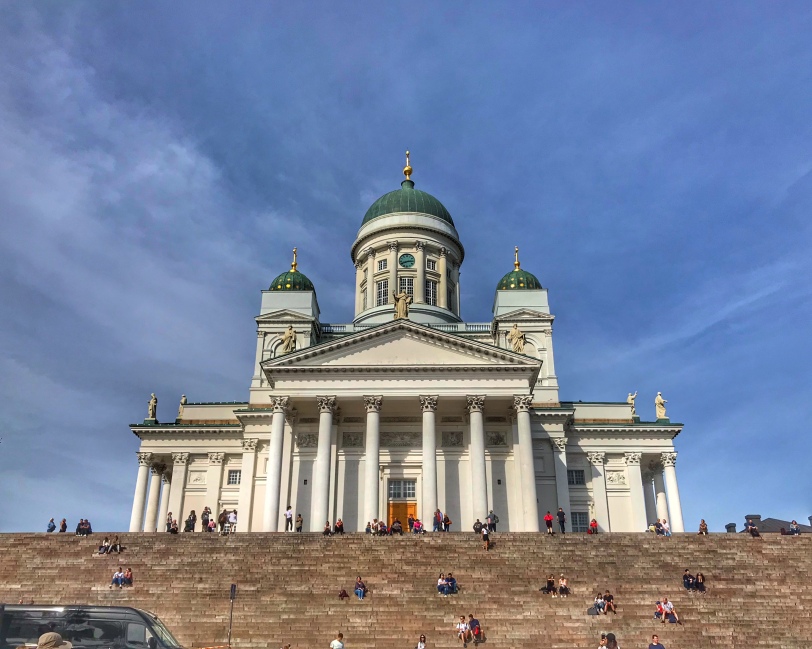 Having a really good day!

I absolutely knew that we could not go to the land of saunas and not visit one, and there are a ton of options. While I was doing a search, however, one kept coming up. The very stylish Löyly. It is located in the former industrial area of Helsinki, and sits right on the Baltic Sea. Because nearly everyone in Finland has their own sauna, public saunas aren’t actually that popular. But Löyly is open to the public (with reservations! Don’t try to get in without it!), and so we were able to make a reservation around sunset – which was super lucky! They were turning people away when we got there!

If you have been to a European spa before, the process is very similar. The men and women go into separate dressing rooms to change, and then you shower before you head to the sauna area. Löyly (which actually means when the stones are hot enough to evaporate the water thrown on them into steam that rises to the bathers) has two types of sauna – smoke and wood burning. The smoke one was insanely hot, so we stayed in the wood burning one…which is bearable until they throw water on the rocks and it gets suffocating. Right about that time, you leave the sauna and you have the option of cooling off with a cold shower, or (and this is what sold me on Löyly, you can take a swim in the Baltic Sea. There is a wooden staircase into the sea and then you climb a ladder down into it. It was SO COLD – and actually took me a couple of tried to get off the ladder and swim in the sea. All the while a Finnish man was telling us how warm the water was! 🙂

The view of Helsinki from Löyly

The restaurant and bar deck of Löyly

Heading into the sauna

After a dip in the Baltic Sea!

Löyly also has a restaurant and bar area that is roped off from the sauna section, as well as multiple large terraces where you can relax. After a couple of rounds of sauna and Baltic Sea, we ordered a couple of drinks and relaxed on the terrace. It was a great way to end our time in Helsinki. 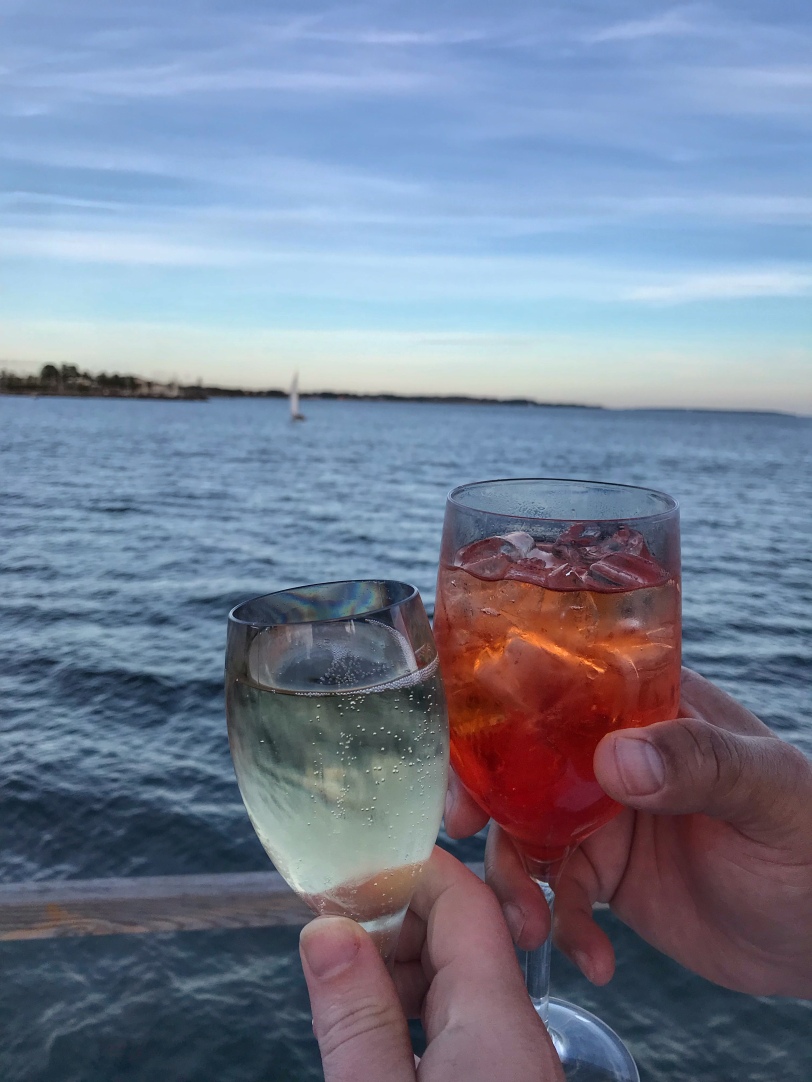 It was a good day Helsinki!

Final Impressions: I liked Helsinki, and I am sure we only scratched the surface of what it had to offer. We definitely did not get to see more than a tiny smidge of the country. Helsinki doesn’t need a lot of time, but it is definitely worth a visit. After our day there, we were hopping on a ferry to Tallinn early the next morning. More on the second half of this trip in a later post.

One thought on “Helsinki, Finland”