Where: Sintra, Portugal
When: January 2018
Hotel: My Story Hotel Rossio (Lisbon)
Why the Sintra: There was a lot to do in Lisbon, but we had covered all we wanted to see in one day. Only an hour outside of Lisbon is Sintra, a UNESCO World Heritage Site with hilltop castles that proved to pretty in pictures to pass up. 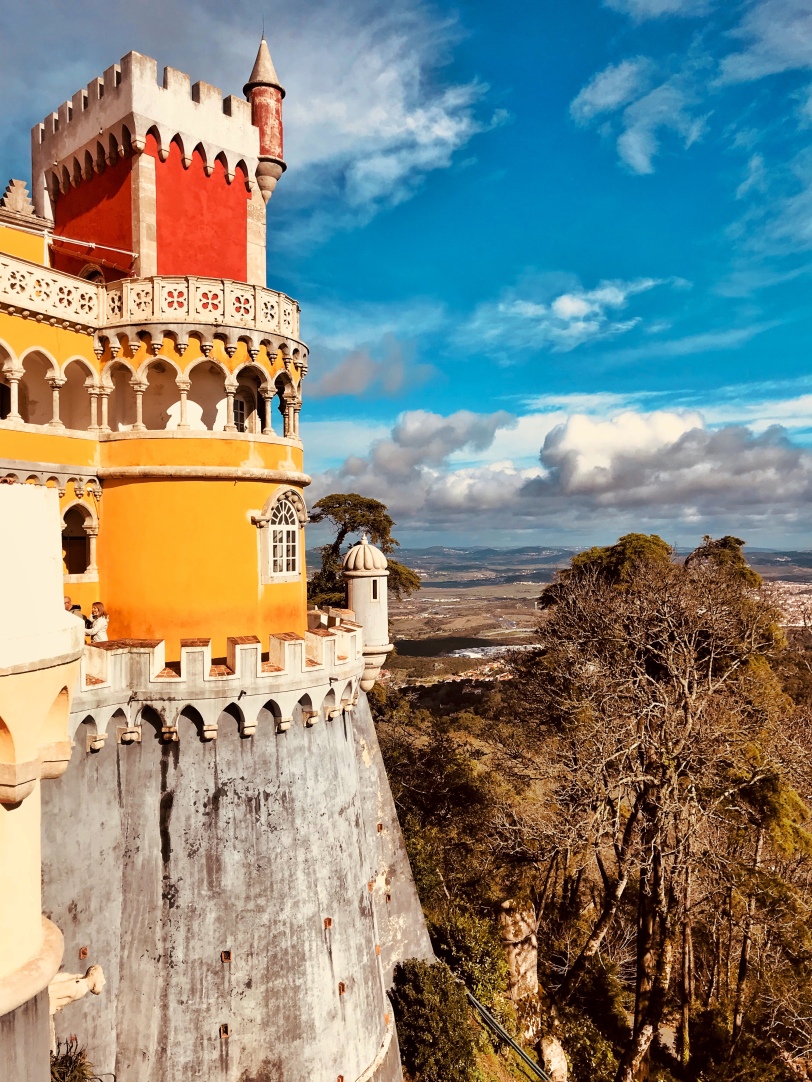 The Trip: We had been out later than expected the night before with our friends Allie and Brian, so we got kind of a late start to Sintra. While easily connected by public transportation, we opted for Uber just because it was faster and we needed to make up some time from sleeping in.

There are a lot of things to see in Sintra, but at the top of my list was the colorful Pena Palace and the gardens at Quinta de Regaleira. Seeing both of those in one day is manageable, but if you want to explore all of the castles and sites, you’d probably need another day, especially if you don’t want to rush. The Uber could only take us so close to the Palace, which sits on a hilltop, and we switched to a Tuk-Tuk and then a bus on the grounds of the palace itself to take us up to the gate.

View from the back of the Tuk-Tuk

Pena Palace sits on one of the highest peaks in Sintra and is recognized by its crazy vibrant colors that aren’t a result of any filter. The colors really are that bright and pretty. There are crazy bright yellow, red and orange walls, as well as blue tiled walls, bringing all the prettiness of Portugal together in one setting. The ornate design is fun with turrets and cutouts to enjoy the crazy good view. We spent so much time walking around the outside – and that is where you’ll spend most of your time. Because traveling in January is the off-season in Europe, the crowds were minimal, which only added to the charm. We did go inside the castle, but to be honest, it wasn’t that memorable. The real star is the outside of the castle itself. 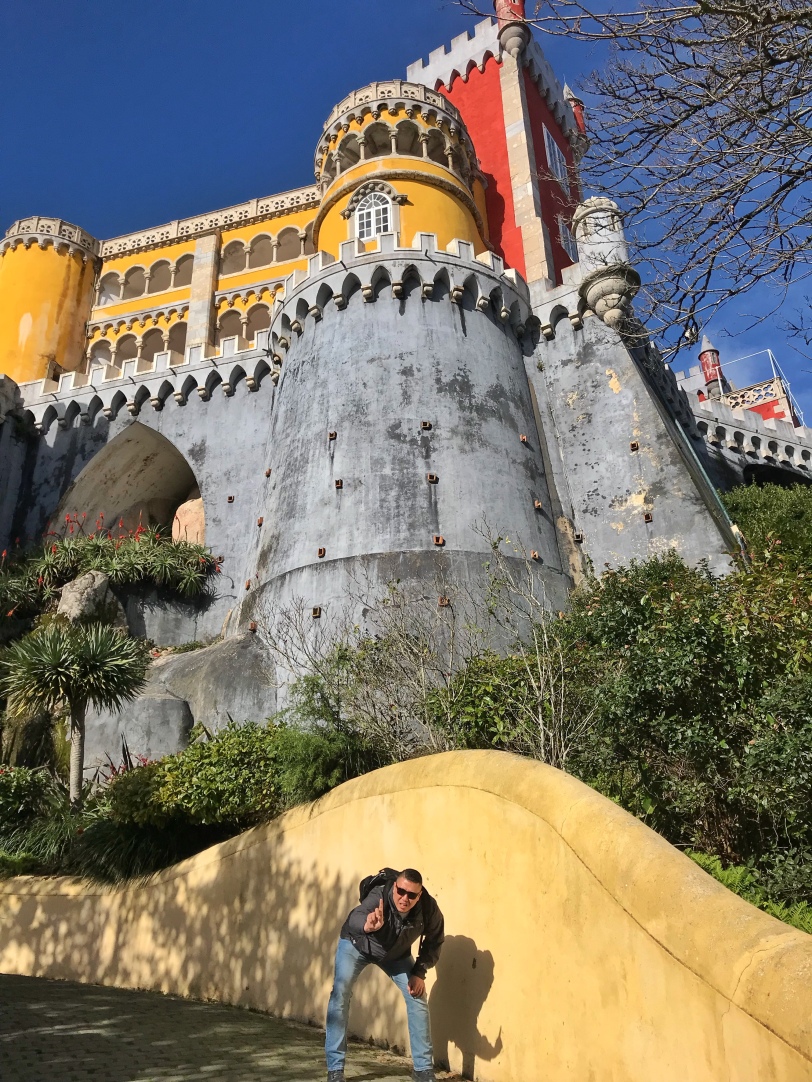 He was dramatic, the walk from where the bus takes you to the palace wasn’t that bad. 🙂 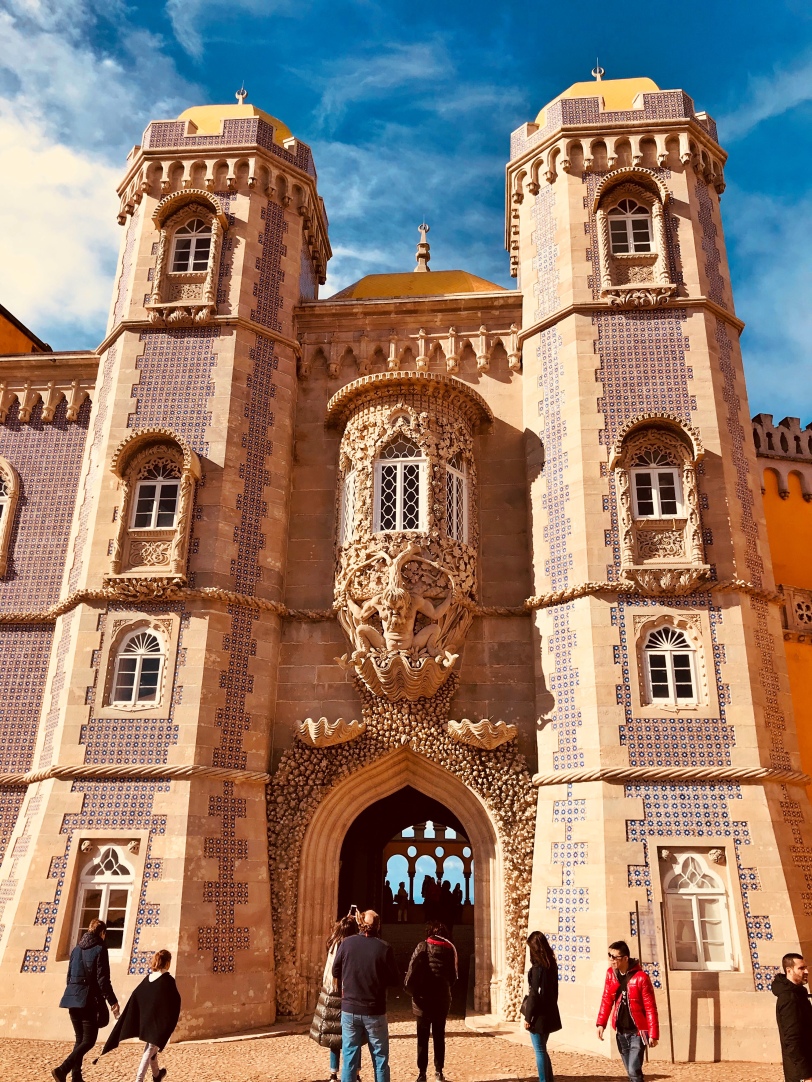 The tiled walls at one of the entrances

We spent so much time outside admiring the palace! 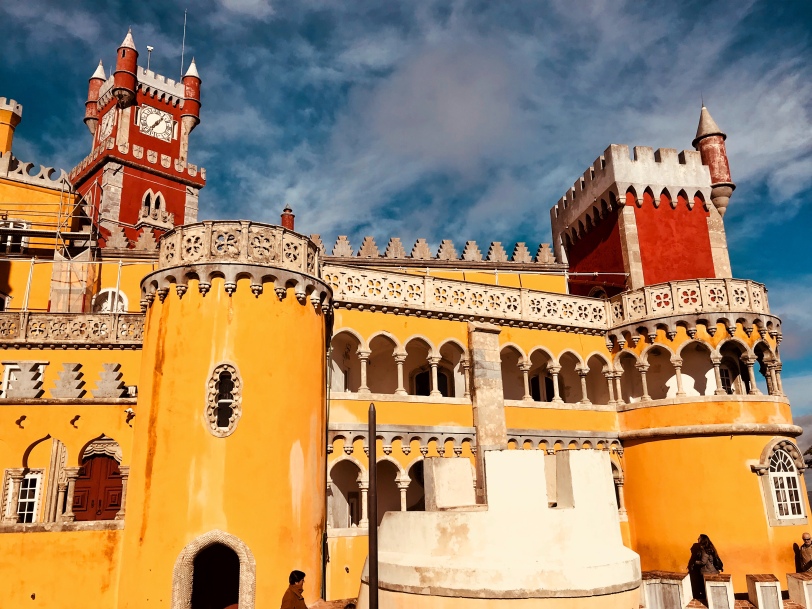 The colors and designs were awesome! 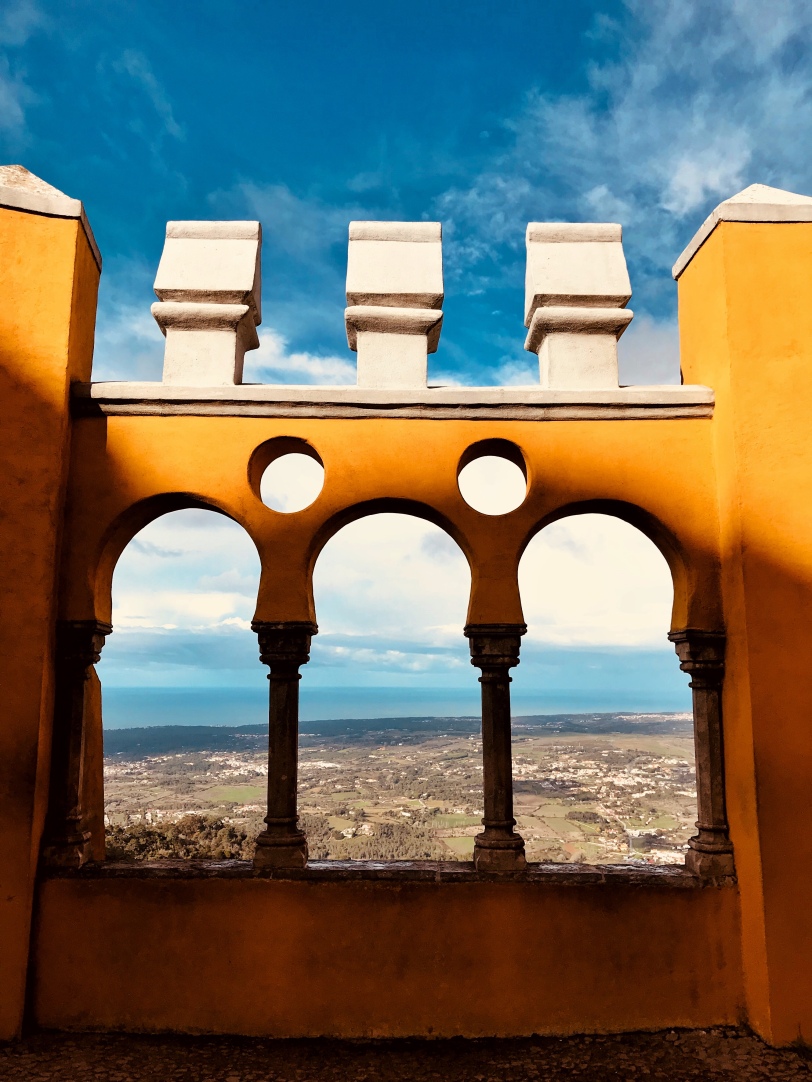 Another view, on the backside of the palace from the entrance. That’s the Atlantic Ocean in the distance.

It was so windy! But so fun!

That is Castelo dos Mouros – we admired from afar but didn’t have the time to walk the walls.

Near the front of the palace

Instead of catching the bus back down the hill, we opted to walk down through the elaborate gardens underneath the palace. The grounds were super pretty – almost fairy tale-esque – and we were able to follow the trail all the way into the cute town of Sintra. It’s not a super big town, but it has adorable windy streets and lots of souvenir shops. We opted to have lunch here in a tiny café before heading on to Quinta de Regaleira. The meal wasn’t memorable, but it was capped off with a shot of Ginga – a Portuguese liqueur that has a cherry flavor, and is served in a chocolate cup.

The cobblestone streets of Sintra

Our next stop was Quinta de Regaleira, by way again of a cute Tuk-Tuk and a sweet old Portuguese man who gave us some good tips as we enjoyed the ride. (If you have a lot of time, there are trails in Sintra that connect all the sites. We just didn’t have time to walk any of them).

Quinta de Regaleira is a large property with a palace and chapel, as well as an extensive garden that was the main attraction for us during our visit. It was a real-life fairy tale setting come to life and shouldn’t be missed. We again lucked out because the crowds were at a minimum, so we had many of the tunnels and sections to ourselves!

This was my favorite part!

To get to the tunnels and the famous well on the grounds you have to walk on the stones!

From inside the cave!

Walking into the caves! 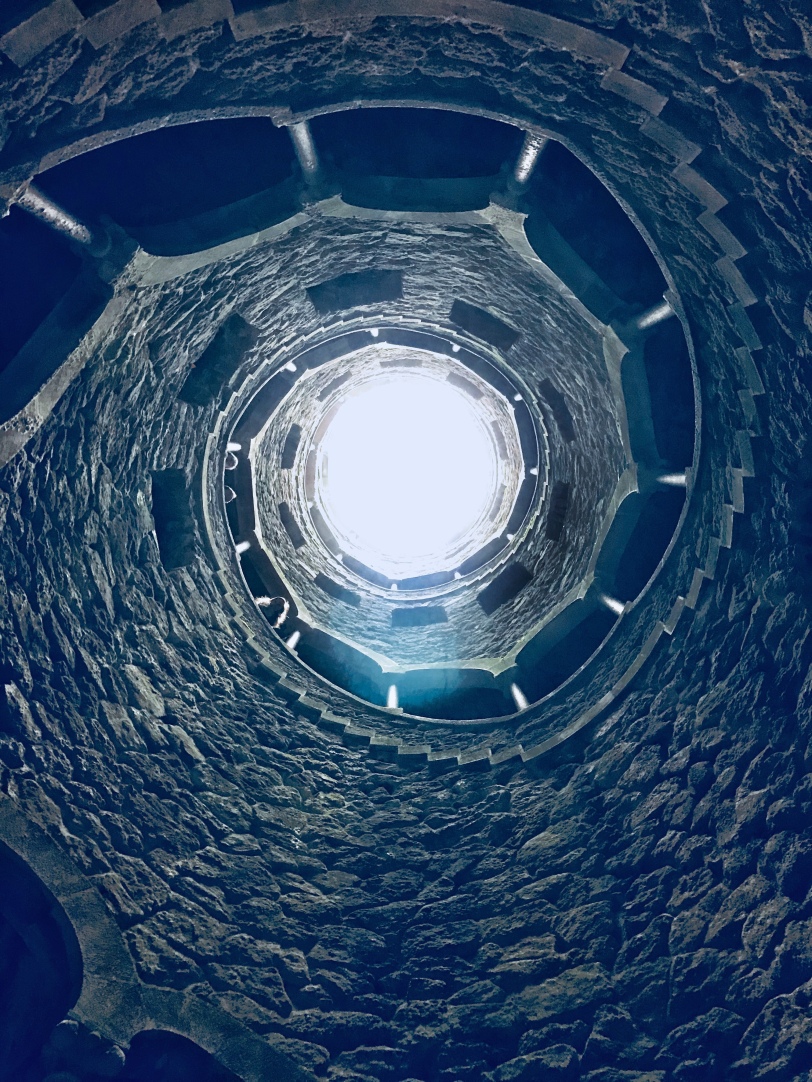 The famous well! Looking up!

It was hard to get a good picture, but I like it! 🙂

You walk inside the winding well walls to the top! 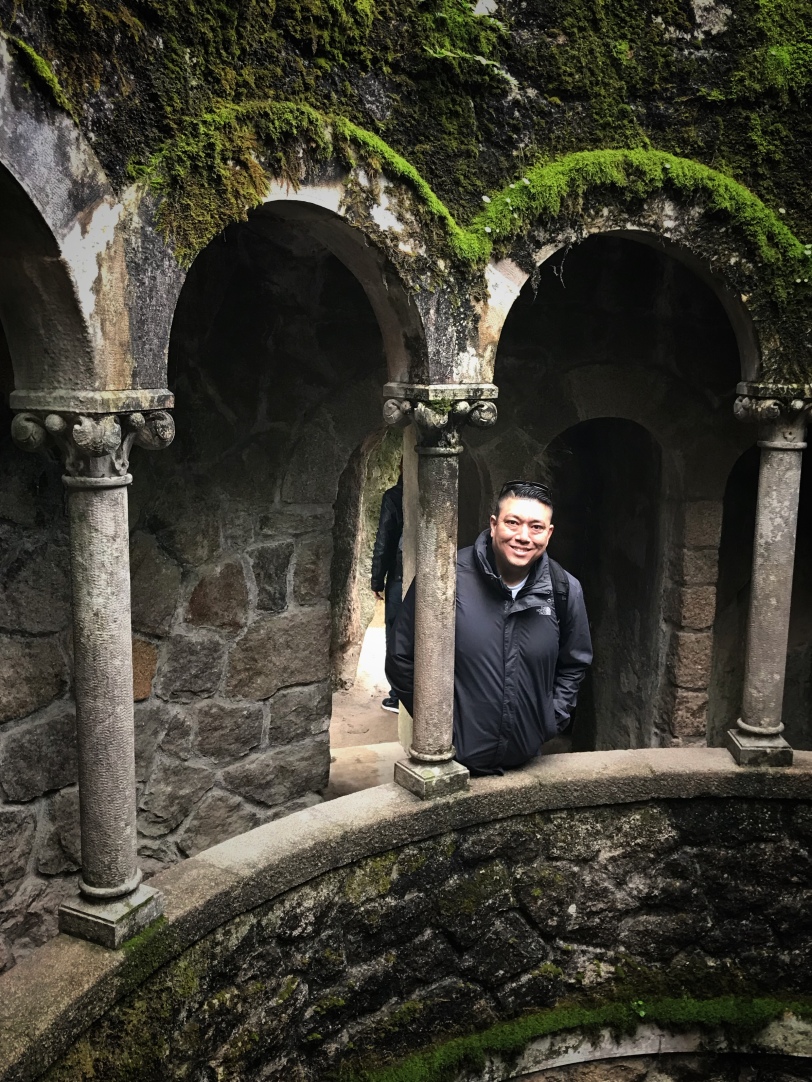 Walking in the walls 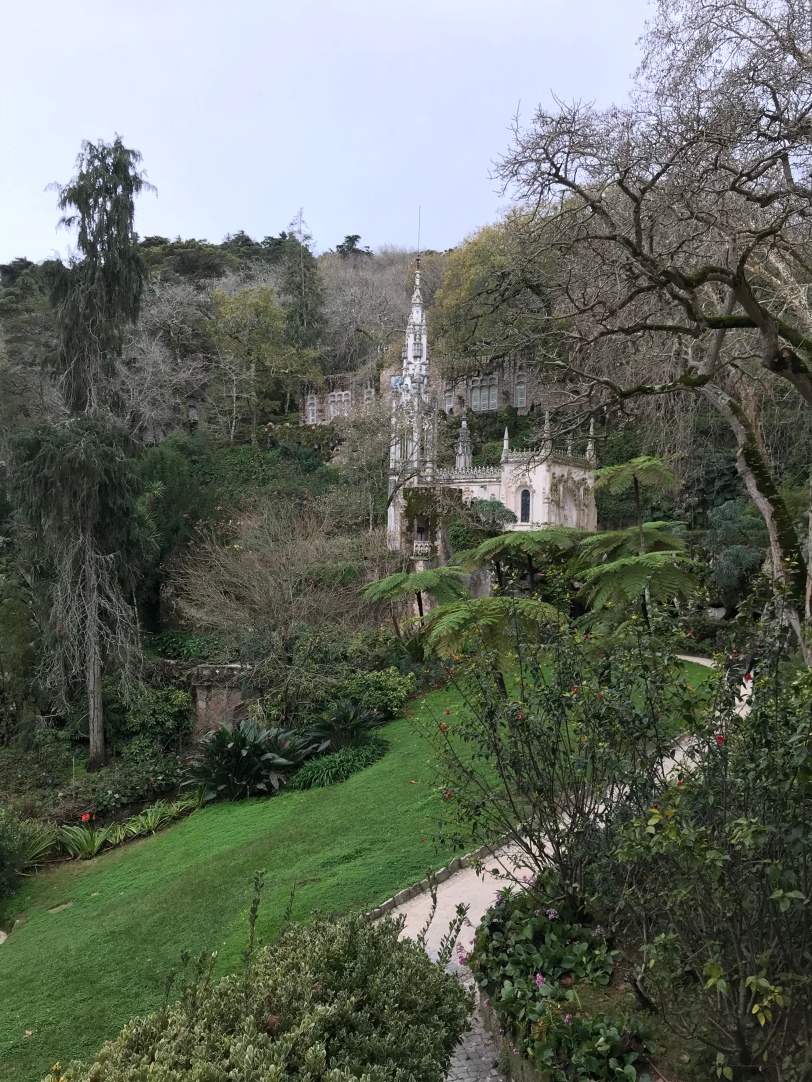 One of the gazebos!

Final impressions: The Pena Palace and Regaleira were awesome, and so completely worth the day trip from Lisbon. Both places lived up to my expectations and I’m so happy we didn’t miss it.

Inside the caves at Quinta da Regaleira!