The Trip: After a rough start to our first full day (that did end on a good note), I was excited about our second full day but definitely had a bit of trepidation because we were going to have another guide take us to both the Marjorelle Garden and the camel ride. While he was more of just the driver between the two sites, it still could have set a not-so-great tone for the day. 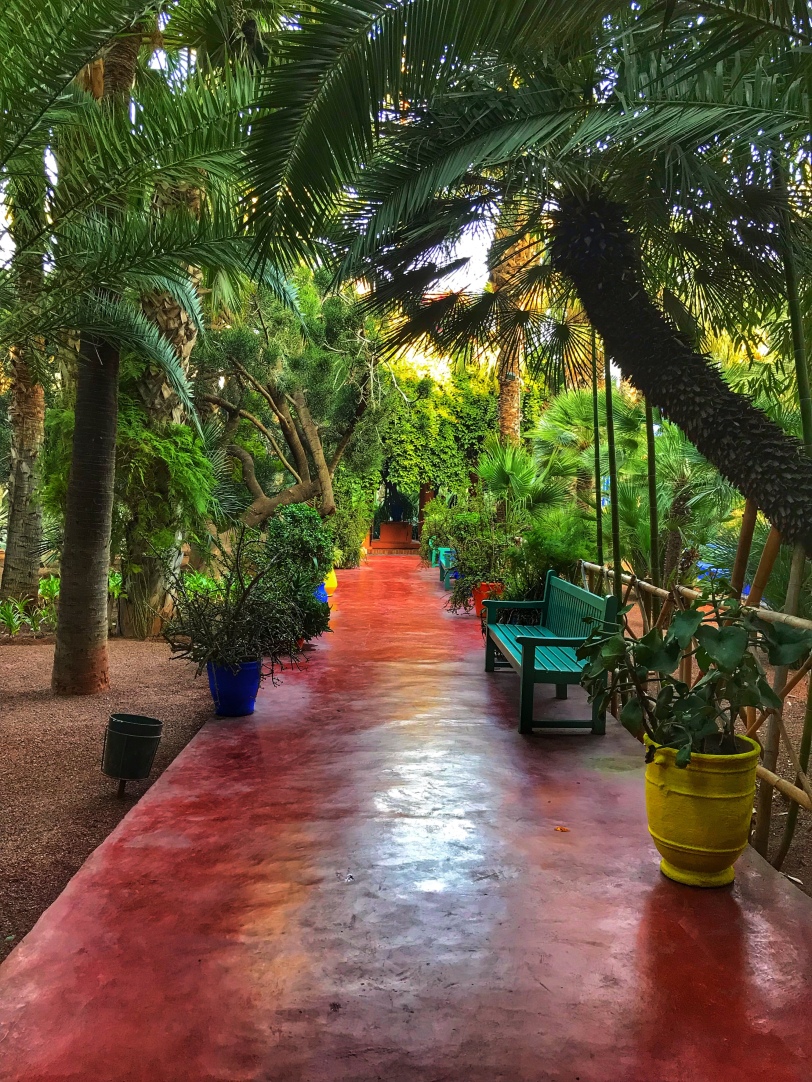 Going early meant we had the gardens mostly to ourselves!

I had booked this through Viator.com, and it was the “Majorelle Garden and Palmeraie Camel Ride from Marrakech” tour. I picked the morning tour, which did mean a bit of an early morning, but in hindsight, was the best time to go. We met our guide in front of the Café de France at 0830, who greeted us with a big smile and immediately put us at ease. I had chosen to do the private tour again, so it was just us and our guide, Shareef. We drove through the quiet streets to the Marjorelle Gardens and were happily surprised that we were among the first in the Gardens. This is key because the grounds are not very large and it was easy to see how the grounds could be overrun with tourists, which would make it not quite as enjoyable or even seem as impressive as it was.

The Marjorelle Garden has become an Instagram-favorite and is among the most-shared pictures in stories about Marrakech, and for good reason. The two-acre garden was bought and restored by fashion designer Yves Saint-Laurent in the 1980s, and along with the garden area itself, is home to the Berber Museum, the Islamic Art Museum of Marrakech and the Yves Saint-Laurent Museum – none of which interested either of us. 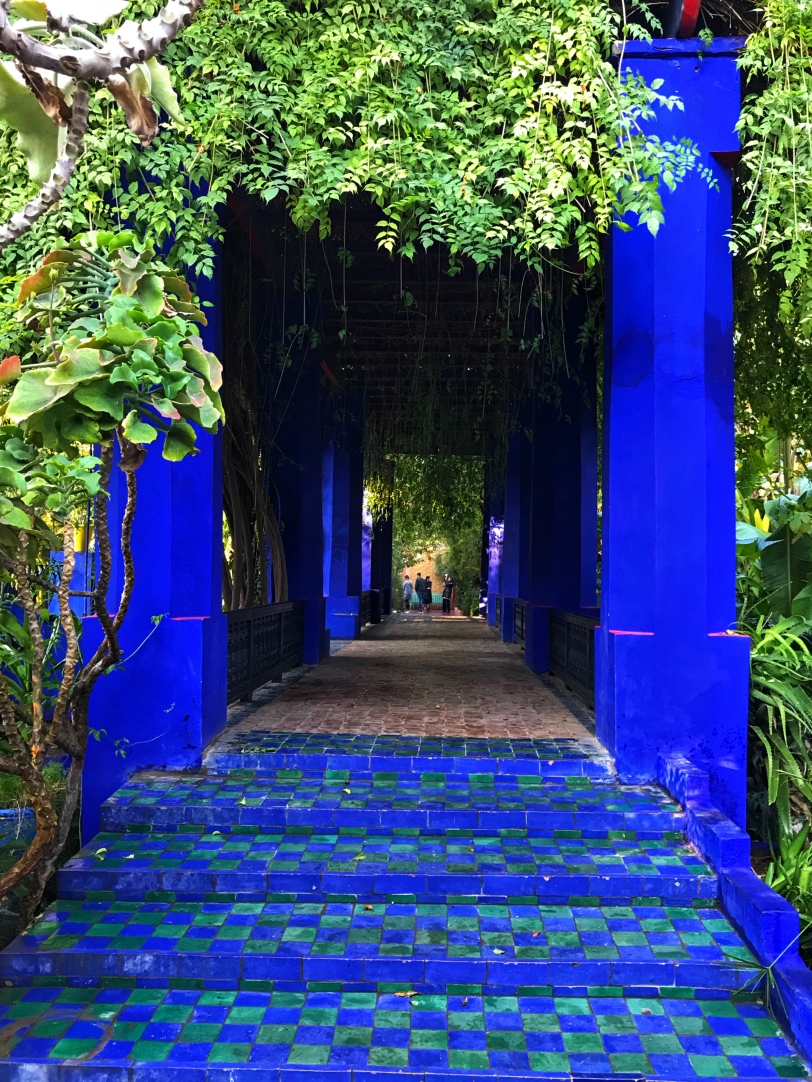 The blues mixed with the garden greens were so pretty and vibrant!!

We had an hour to explore the garden area, which was honestly plenty of time, unless you were trying to get the perfect Instagram picture…then more time is for sure needed. (Honestly, there might not be anything that is equal parts entertaining and annoying then watching the Instagram models take 20 pictures in a row, look at them, and then start over again while other people just want to take one picture that doesn’t include the model in some weird pose.) The blues are as vibrant as it appears in the pictures and the gardens just as green. We enjoyed wandering around, making our way into the little nooks and crannies, but felt we had seen all of it by the time we were walking out 50 minutes later.

One of the gorgeous overlooks 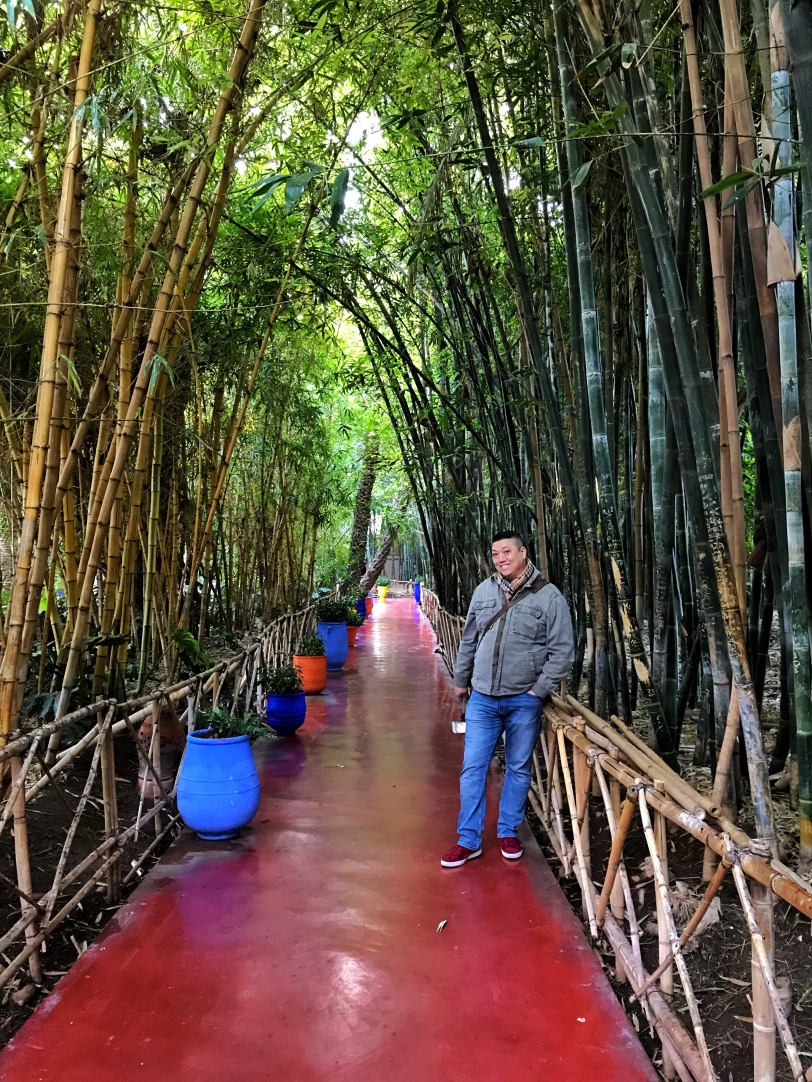 Johnny in the gardens 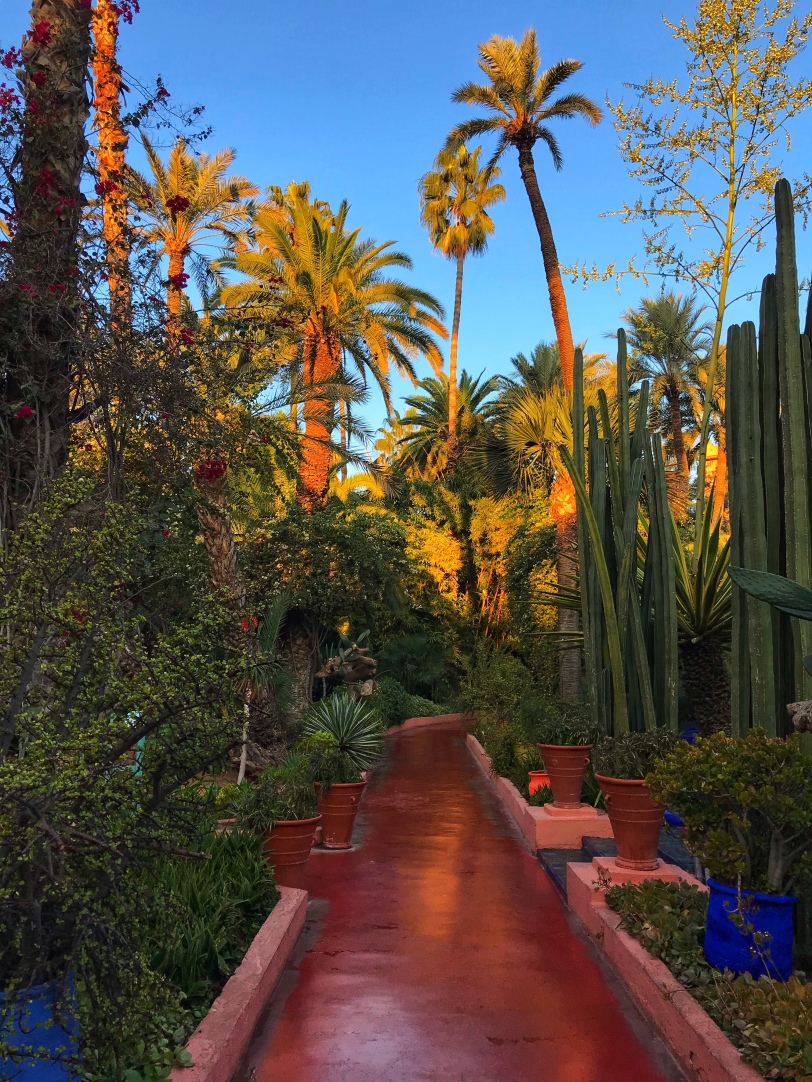 It really was so pretty.

One of the many fountains in the gardens. 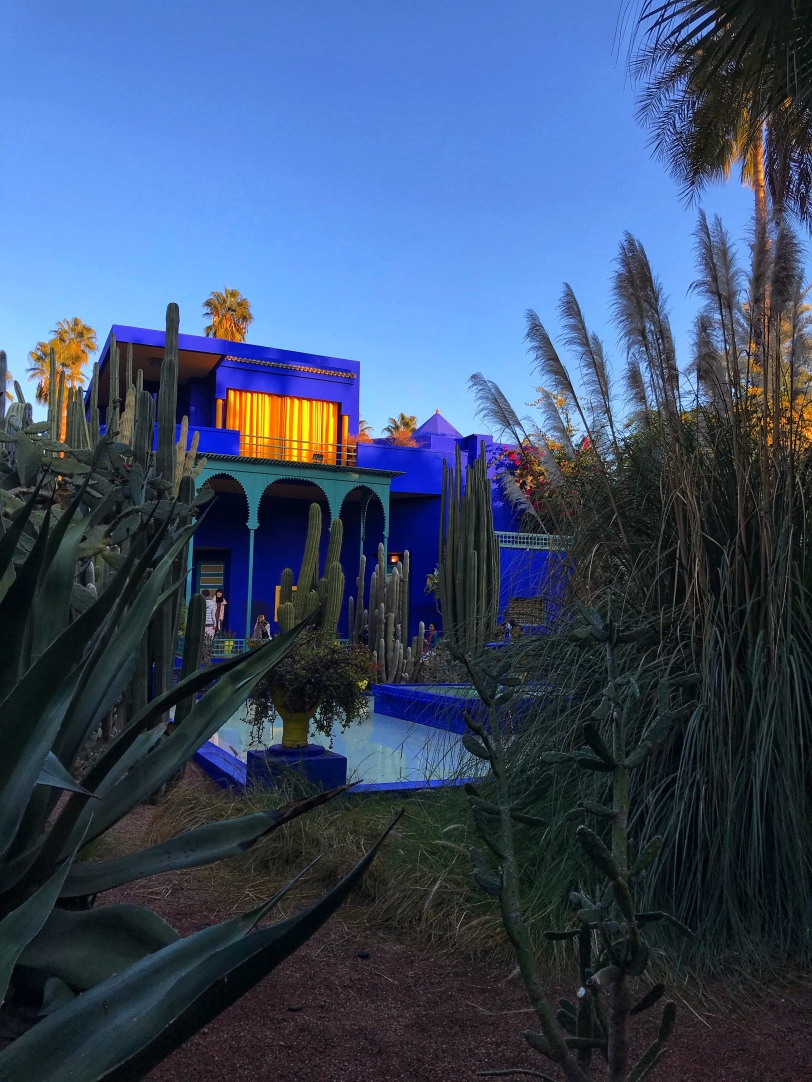 This is the Instagram star of the gardens – even early, we were dodging the models!

I loved the blues!!

The next stop was the Palmerie, which is a park…kind of. It’s hard to explain as there is a very exclusive neighborhood sitting right in the middle of it (where the likes of Leo DiCaprio owns a home) and is surrounded by just a garden of palm trees. In this area, camel rides are given around the park which is both sandy and has palm trees. Honestly, I don’t know if I would have enjoyed it nearly as much had we come in the high-tourist months. I imagine it would be quite crowded – but as only a handful of us out there, it was actually really enjoyable. (Although, if I had longer time in Morocco, I would definitely have opted for a camel ride in the Sahara!)

Before you ride, they wrap you in a head scarf and put on a kind of robe. It was fun to be outfitted for a little while. And also telling that I should not buy one – they are absolutely beautiful but I would never be able to wrap it properly.

In my scarf…unfortunately, I had just gotten two forehead moles removed a couple weeks prior…ruins the photo a bit. Oh well!

I’ll be honest – getting on the camel was a bit unnerving. The camel starts from a sitting position and you climb on, then the camel awkwardly stands and you are waaaayyyy off the ground. I remember a bit about riding a horse, and you are definitely higher on the camel. We started off and it was a lot smoother of a ride then I expected, and because it was a private ride and there weren’t a lot of folks in the park, it was actually quite peaceful.

After about 45 minutes, we stopped a typical Berber house for tea and snacks. The Berber’s are indigenous to North Africa, and mostly live in the mountains of Morocco. We stopped in the stone hut, where we were greeted with Mint Tea and Bourjeje – a pancake containing flour, eggs, yeast and salt. It was interesting, if not a little bit awkward given that we didn’t speak the Berber language and the sweet old lady who let us into her house didn’t speak English. She refilled our tea and pancakes and sat with us smiling (and occasionally talking with our hands – it’s amazing how much can be understood with just gestures!)

Tea time in the Berber house.

After our snack, we got back on the camel for the final 30 minutes. I honestly don’t know how people travelled by camel…after about an hour, I was sufficiently sore and ready for solid ground. I will say this, the guide that led our camels around was awesome! He took the best pictures, knew all the angles and got us some of my favorite pictures from the trip! I would definitely recommend this tour agency again!

Our guide took the best photos!

One of my favorites of us!

John is an animal whisperer. Camels in Morocco, horses in Iceland, etc.

After we said goodbye to our guide (and our camels, named Madonna and Shakira!), we were back in the van with Shareef. And this is where he went from a good driver to the best one. We asked how far the Marrakesh Starbucks was from the Medina, and then asked if it was on our way home. Getting a yes to both, we asked if he wouldn’t mind swinging by for me to get one of my beloved mugs and he agreed! It wasn’t too far out of the way, but definitely wasn’t scheduled – so I was super thankful we had him as a driver as I didn’t want to bother with the taxis.

Mug in hand, we made our way back to the Riad (we couldn’t miss the delicious afternoon cakes and tea!) to rest up for the afternoon that was going to be spent shopping in the endless maze of souks. I was excited for shopping but was also a bit nervous…I am TERRIBLE at bargaining! I just planned on letting John do the talking…but at the first store where I wanted to buy a couple of Hamsa’s, I felt right at home! The key in the souks is to get the initial price, and then offer 75 percent less as a counteroffer. It seems like a staggering amount, but the initial prices are SO inflated, you have to haggle more than you may feel comfortable with. 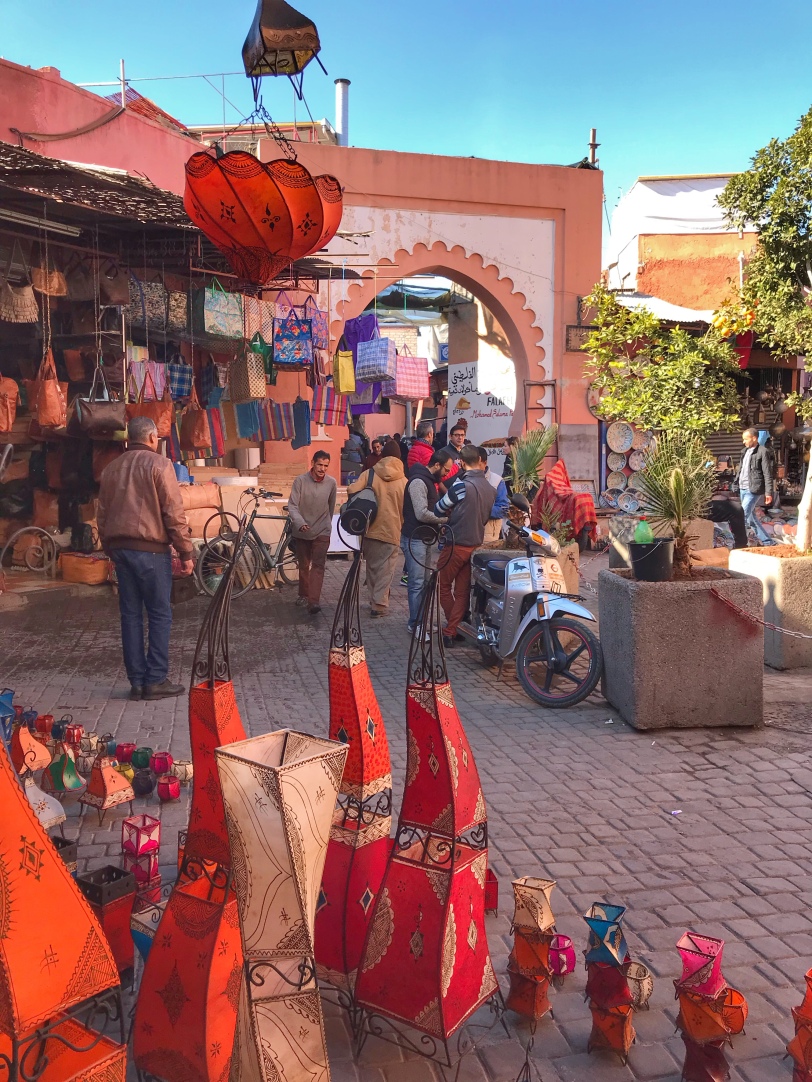 Shopping in the souks! It goes in and out from mazes to outside areas.

I didn’t really go in with any big idea of what I wanted to buy – mainly I just figured we would wander (and get lost) and go from there! John really wanted these brightly colored tajines (it is a food and a dish in Morocco), but thankfully we had told our Riad owner this and he suggested we find the wagon in the main square and could get them for the equivalent of $.10 each. Yes, 10 cents each. We found the wagon and after rooting around some broken ones (these are pretty fragile), we found a couple we liked.

With those purchases in hand, we headed for the Souks. I really liked these canvas-like candle holders with patterns on them and picked up five brightly colored ones (I love, love the colors of Morocco!)…but not before we had to pretend to walk away before the guy gave us our asking price. By the time we wandered (but didn’t get lost!), we had these gorgeous bronze and multi-colored glass candle holders and four brightly colored pillow cases. All-in-all, a success!

Those brightly colored dishes are typical Moroccan serving-ware. We came home with ones similar to these.

I loved this area of the souks. So gorgeous…and fruitful! We found two of the lanterns John wanted to buy here. (Seen in the middle shelf on the lefthand side).

We didn’t go with these wall hangings, but found table candleholders in the same design.

That night, we didn’t venture far and went back to the same restaurant. It really was that good. And, the more we travel, the more comfortable we are with going with what we like. We don’t get FOMO and we don’t pretend to be foodies – plus, each time we have sought out a restaurant, it’s been a bit of a letdown. Our tanjine chicken, however, never let us down. And once again, it was delicious!

I can’t explain the goodness that was this dish.

Final impressions: I liked Morocco a LOT more than I expected. We read a lot about Marrakech and Morocco before we went, which I think really prepared us for what we were getting ourselves into (blogs, not guidebooks, people!!) I never felt unsafe, there was a lot of hidden pretty spots and the people were friendly. I wouldn’t mind going back to explore more of the country…especially with the cheap flights and knowing what we know now. Overall, would definitely recommend it!