Where: Plitvice Lakes National Park, Croatia
When: August 2015
Hotel: Plitvice Ethno House
Why Plitvice Lakes: Thanks to Pinterest and various travel magazines, I kept seeing pictures of these amazing waterfalls that were located in Croatia, of all places. After coming across these lakes on multiple occasions, I really wanted to see them for myself. There are actually two popular waterfall parks in Croatia – Plitvice and Krka. I’d heard good things about both, but was also told that doing both was a bit unnecessary. The only difference, really, is that you can swim in one of the waterfalls in Krka’s park, but swimming is not allowed in Plitvice. However, I’d been told that Plitvice (Plit-veet-say) is prettier. Given that, as well as the fact that I had always wanted to see it, deciding which one to do was a no brainer. 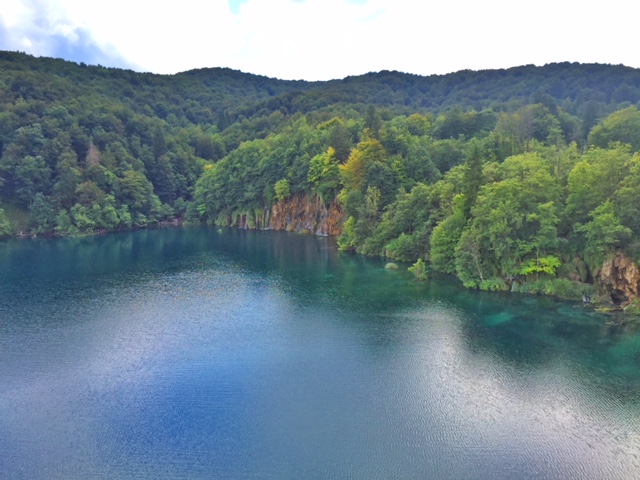 The Trip: Both John and I were pretty nervous about having to get back in the car so soon after our nightmare journey the day before. The good part of this was that it seemed like pretty much everyone was driving to the Croatian coast, while we were headed more inland. Plitvice Lakes is a little over two hours away from Zagreb, and minus the traffic, it was a fast, easy trip! Our hotel let us check in early, so we dropped our bags and Caesar and headed five minutes up the road to the park.

Everything I had read said to get there at 9 am before all of the tour buses started rolling in, but I figured we would probably miss the big rush by getting there after lunch, when most of the morning crowd would have thinned out. Parking was easy – there are three lots to choose from, and we used Park 2, which I believe is the most central of all the lots. It’s a really good place to start when you aren’t sure what you want to see.

The park itself is huge, spread over 73,350 acres, and is split up into Upper and Lower lakes. You can do either, or both, but to do both means spending the entire day at the park. On your ticket is a map of the park, along with suggested routes labeled A through K. Path A is the shortest, estimated to last only 2-3 hours, while K is expected to take 6-8. Not quite sure of what to pick, we asked one of the park guides for her suggestion and she pointed us to path “E,” which explores the upper lakes with an option to see the lower lakes after. With her suggestion, that’s the way we went. To get to that path, you ride a very short boat ride across one of the lakes. From here, the park is best described in pictures. 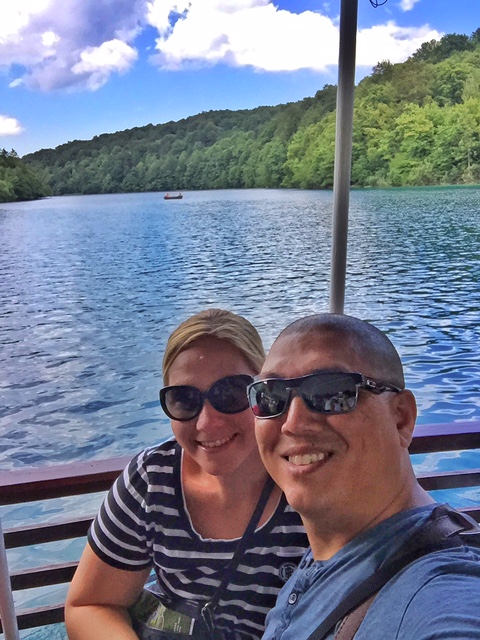 So happy to be there! 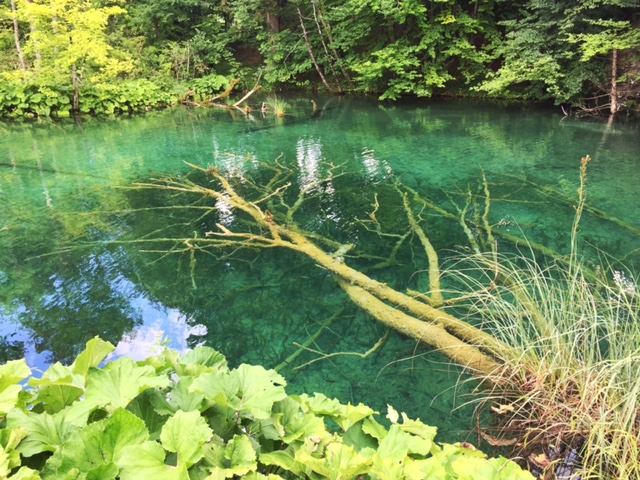 The water throughout the park was so clear! The land is protected, so no swimming or fishing. 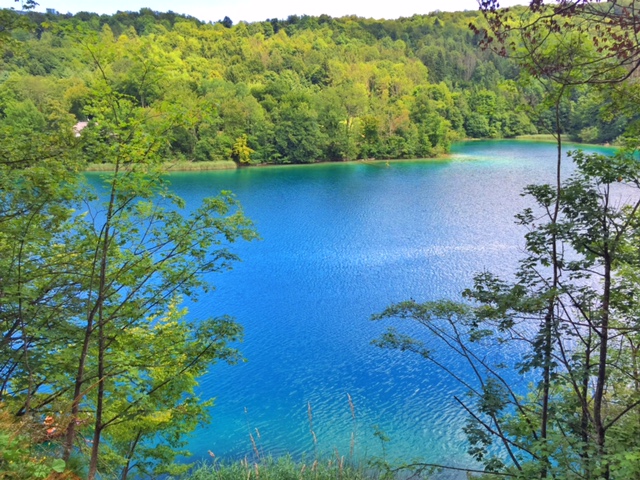 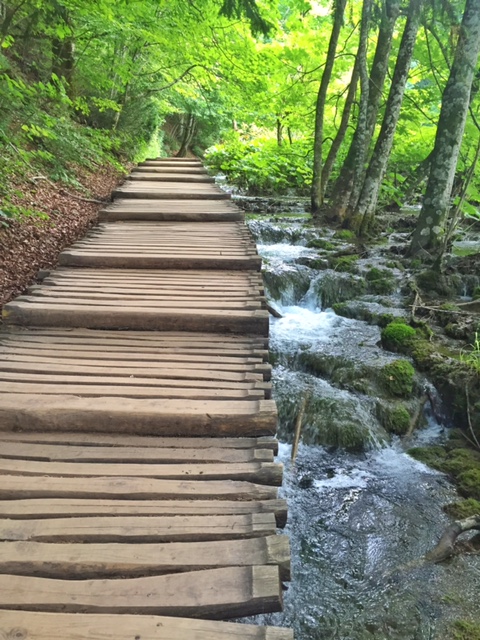 The landscape changes from big lakes to small streams to waterfalls everywhere. 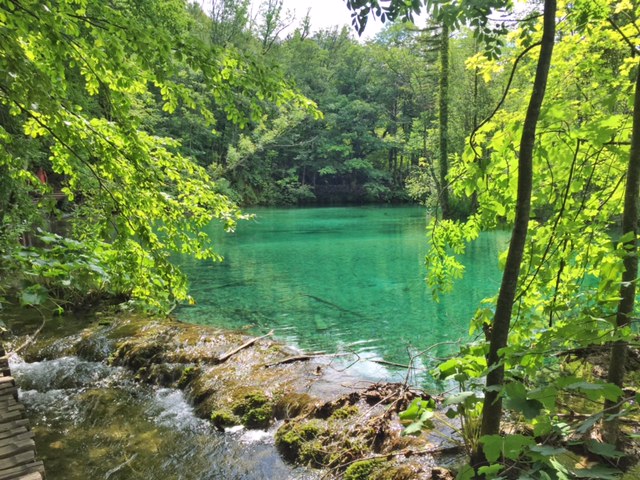 This was right off the path in the previous pictures. 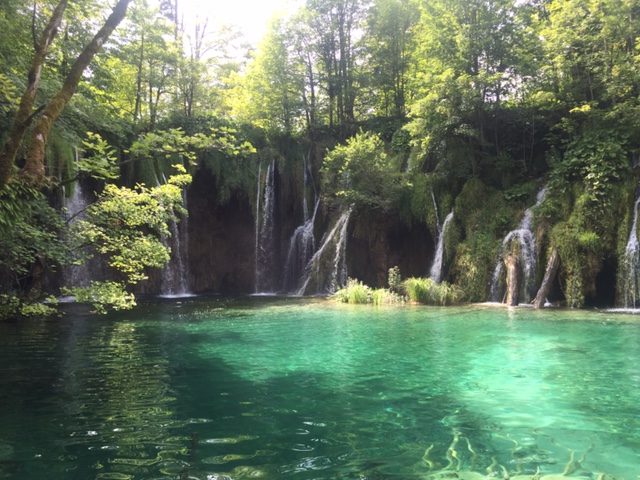 We walked a long for awhile looking at the pretty lakes, but were ready for the waterfalls…and then we found an amazing array of falls, linked by overwater wooden bridges. 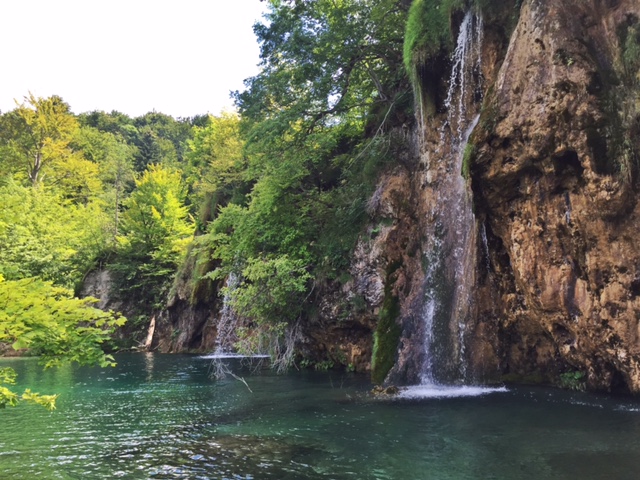 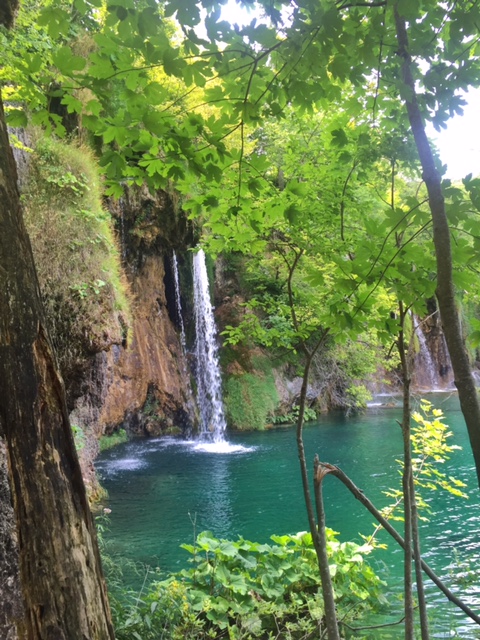 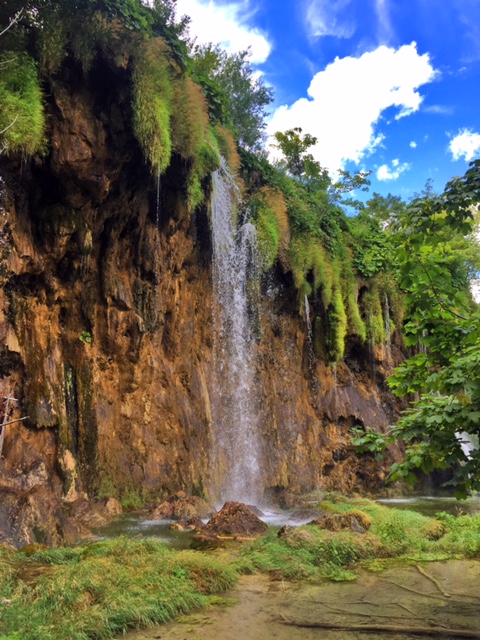 Even though you can’t swim, you get misted by the falls which is really welcome on a hot day!

We continued to follow the path around the upper lakes and were given really pretty overhead views! 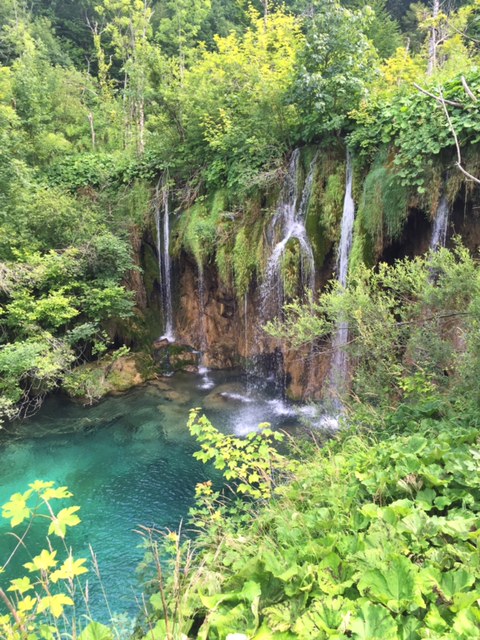 I didn’t get tired of the falls at all!

After we got to the end of the path, we were a bit exhausted – so it was handy that there was a rest area with a restaurant to relax a bit and plan out our next move. 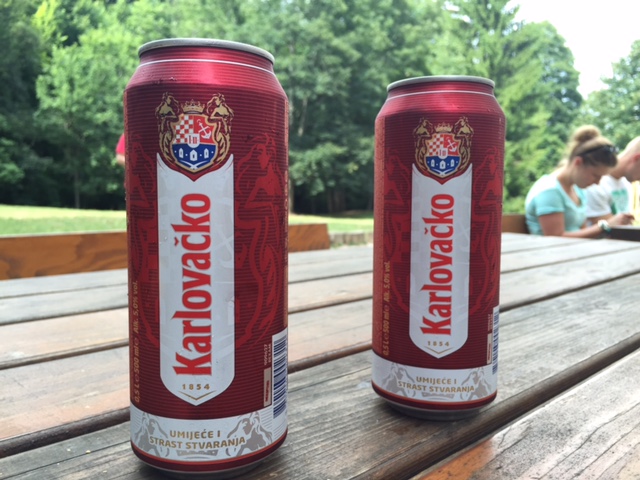 We decided we wanted to see the grand view of the lower lakes, but were nearing the end of our desire to hike a lot. We took the shuttle (which is absolutely necessary – again, the park is HUGE and thankfully, the shuttle and boats help eliminate some of the walking!) 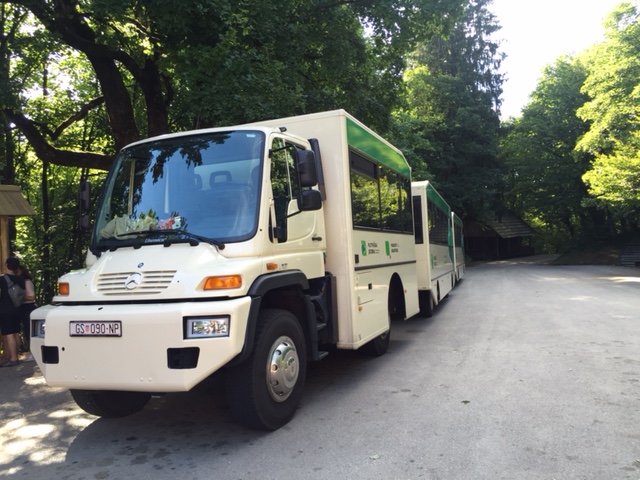 The shuttle busses…which held a lot of people so there was no waiting!

The lower lakes looked just as pretty as the upper lakes, but hiking all the way down, and then all the way up, was not in the books for us after our already long hike! Thankfully, you can see the best view in the park even if you stay at the top of the canyon. 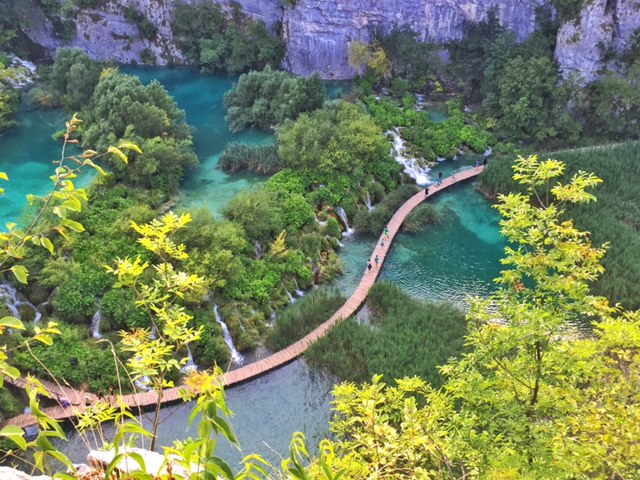 The view of all views!

There’s not much in the area around the park besides hotels, so thankfully the place we were staying had an on-site restaurant. Even better, it was really, really good! AND it was the first time I tried Croatian red wine…and it is delicious!! (Unfortunately, the bottles I brought back didn’t last long thanks to back to back Sunday dinners with friends. The good news? This is one red wine that WON’T give you a terrible headache the next day, even if you drink a little more than you should. So not only is it delicious – it is magic!) 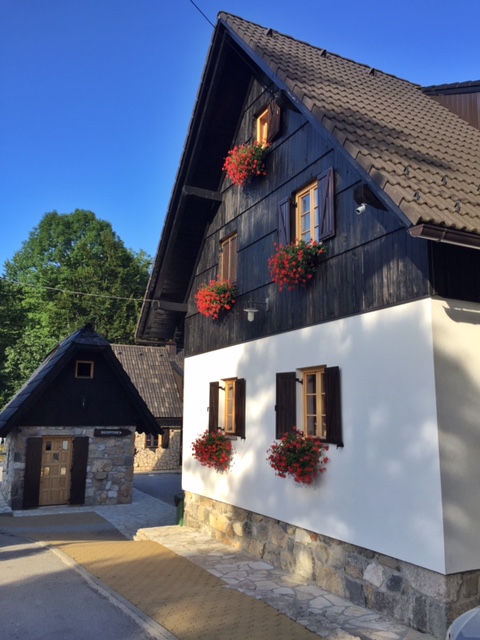 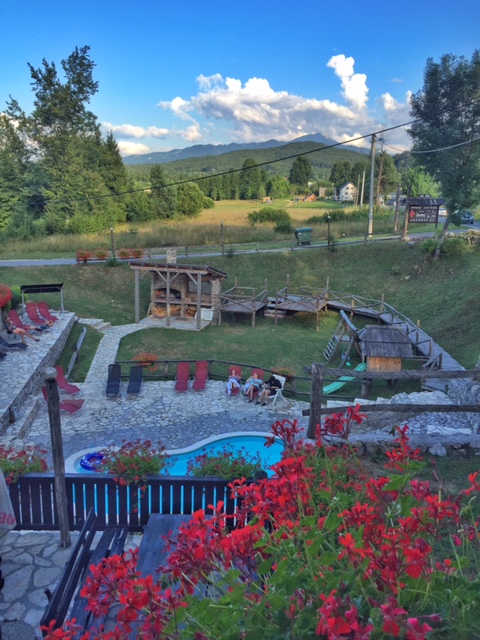 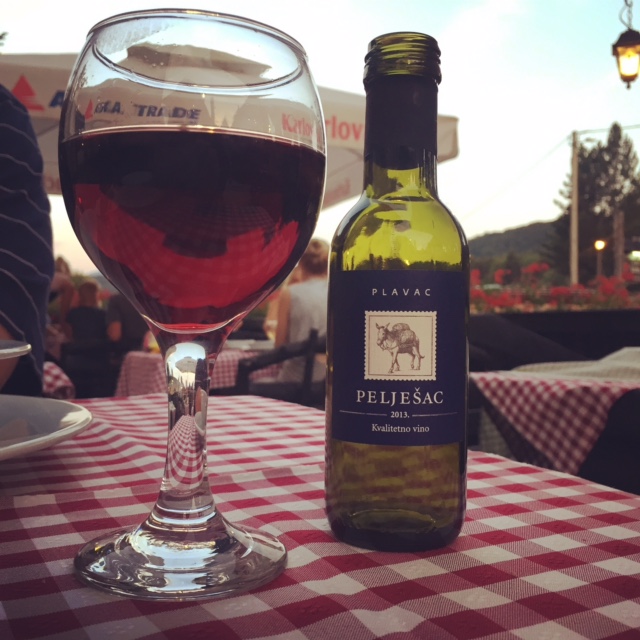 Final impressions: If you do get a chance to visit Croatia and will be anywhere within a 3-hour radius, I absolutely suggest visiting this park. It is breathtakingly beautiful and more often than not, you will look around and wonder how in the world this is in hiding in Croatia. We weren’t as prepared as we should have been, but if you do go – pack as if you are going on a long hike. Equip yourself with water and snacks, because even though there are snack stands, they can get few and far between. In the summer, wear light clothes, bring a hat and make sure to put on your sunscreen. And definitely take your time – really taking in the incredible journey that is Plitvice!