Where: Rome Italy
When: July 2014
Hotel: Cernaia Suites
Why Rome: Despite everything I had heard about visiting Rome in July being a bad idea, when RyanAir offers up $50 round-trip plane tickets – you don’t pass it up! Rome was at the top of my Europe Bucket List, so I was excited to go, even if John and I were facing stifling heat and over-crowding thanks to an influx of tourists. With that in mind, we were off to spend 4th of July in the Eternal City! 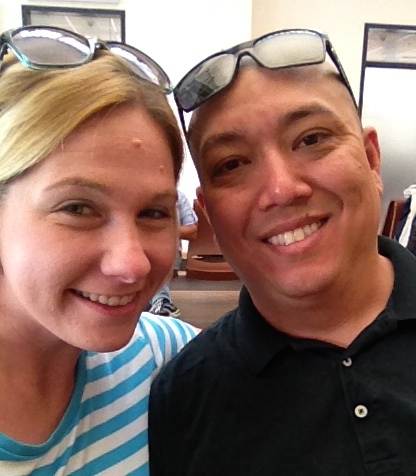 The Trip:  We flew from Memmingen to Rome Ciampino, and almost immediately after we exited the airport, a fellow American walked out and we overheard him talking about how his wallet had been stolen…and that was our introduction to Roma! Of course we had heard all about the skilled pick pockets of Rome, and we knew better than to do anything that left us open to thieves, and that included leaving our wallets out where anyone could grab it – a lesson one poor guy learned the hard way.

After that excitement, we rode a cramped bus (best and cheapest option) to a stop right outside Termini, the main train station. The good news was that our hotel was about a five-minute walk away. Prior to heading to Rome, I had heard the area around Termini was sketchy. But those reports are for the streets immediately surrounding the train station and even those weren’t terrible. Our hotel was on a side street close to a Metro and bus stop – quietly tucked away and perfectly safe. We didn’t have much on the books for the first night, which was good because we were both a bit exhausted. So a disappointing dinner (explained here in my Top 5 Surprises of Rome post) later, we were tucked in our air-conditioned room.

Rome is like any other big city – so overwhelming when starting to plan! But I knew we wanted to hit the big stops – Piazza Navona, the Pantheon, Colosseum, Roman Forum, Trevi Fountain, Spanish Steps and the Vatican. Then, the more I researched, the more I wanted to see other parts of the city – Trastevere, for one and I definitely wanted to do a food tour! So, Georgia-like heat or not, we had a lot of ground to cover! 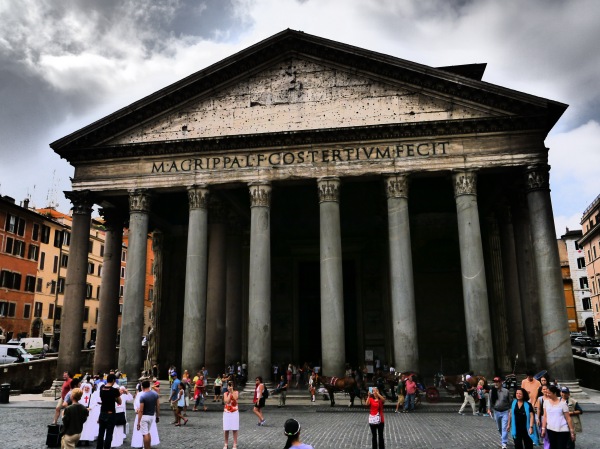 Stop one – the Pantheon!

John inside the massive complex – so impressive.

The busy square outside

A short distance away – Piazza Navona, a gorgeous square with Bellini fountains! 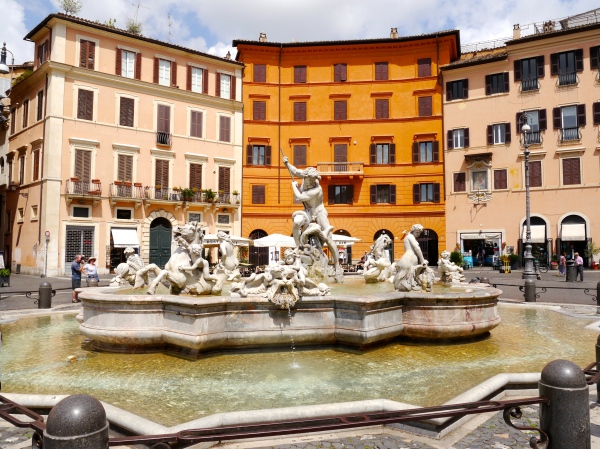 One of the Bellini fountains.

The main Bellini fountain in the square.

We worked our way over to Vatican City, and right past the line wrapped around the entrance. It STILL shocks me that people don’t buy tickets in advance whenever possible. These people were standing in the sweltering heat, around the large wall surrounding the building dealing with beggars and peddlers while we walked straight in. No wait whatsoever. So easy. (One note – ladies and gents, make sure to read up on the dress codes before visiting! I carried a sweater in my bag and put it over my bare shoulders and John had pants that covered up his knees while inside.) 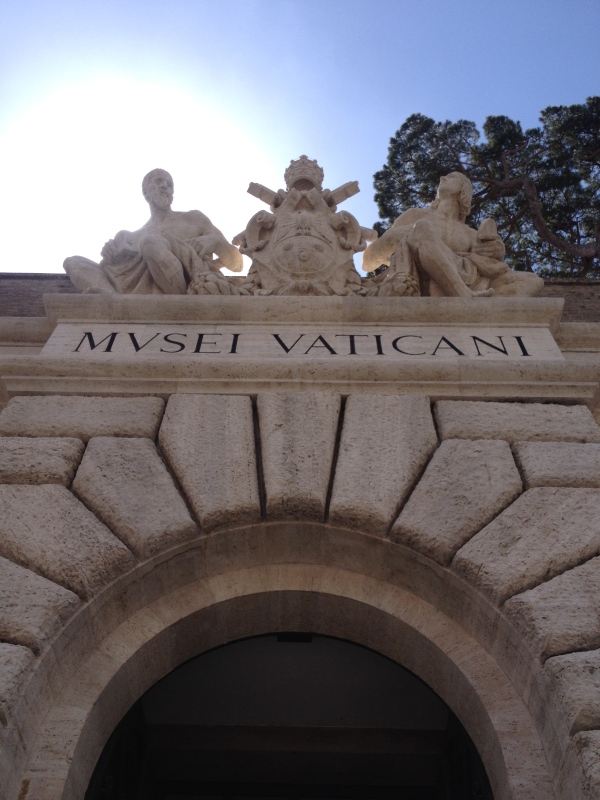 Catholic or not – this should be a stop.

The Vatican museum is well-marked and you have several path options to take. As we are not big museum people and didn’t want to contend with the crowds anymore than we had to, we opted to fast track it to the Sistine Chapel. 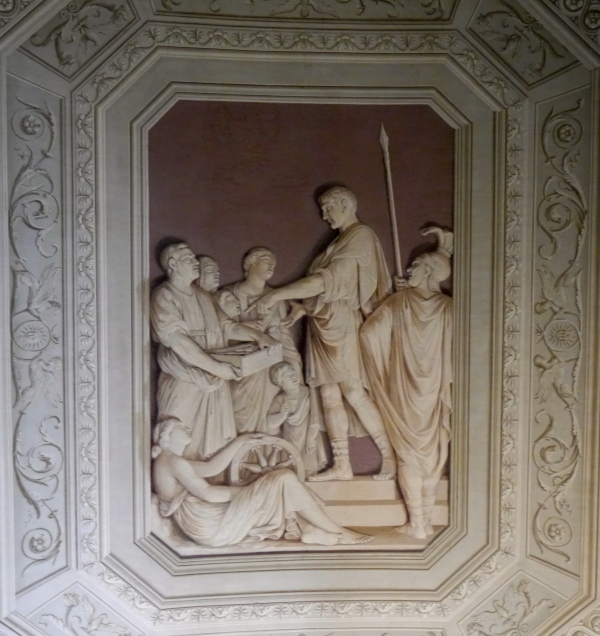 I loved this painting on one of the ceilings. Think it’s 3D? Think again!

The hall of tapestries was equal amazing. How they got this much detail, I have no idea!

The Sistine Chapel. It was amazing to see it in person.

Quick note – pictures are NOT allowed in the Sistine Chapel, and normally – I would abide by such rules. But it was almost overwhelming to be in there and pretty much everyone was taking pictures even as the guards repeatedly called out no pictures. Even though I know it was wrong, I couldn’t help myself!

Another note, as you pass through the Sistine Chapel – head to the back right-hand corner and exit there to make a quick getaway to St. Peter’s Basilica. Saves time and walking!

The cut-through between the Sistine Chapel and the Basilica.

St. Peter’s Square from the entrance into the Basilica

The entrance into St. Peter’s Basilica.

One of the prettiest churches I have ever seen! 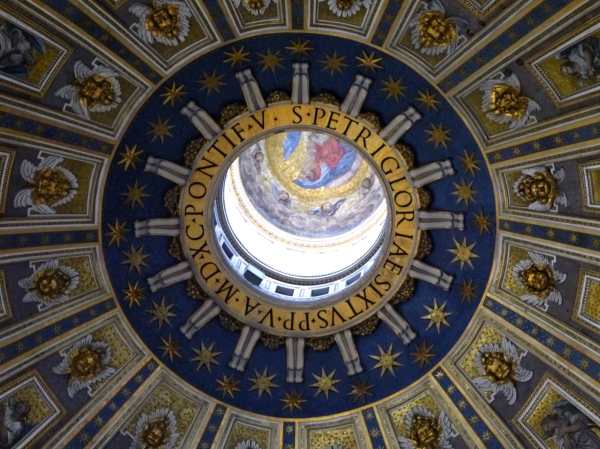 St. Peter…John and I both rubbed his foot because it is said we will be granted a blessing. 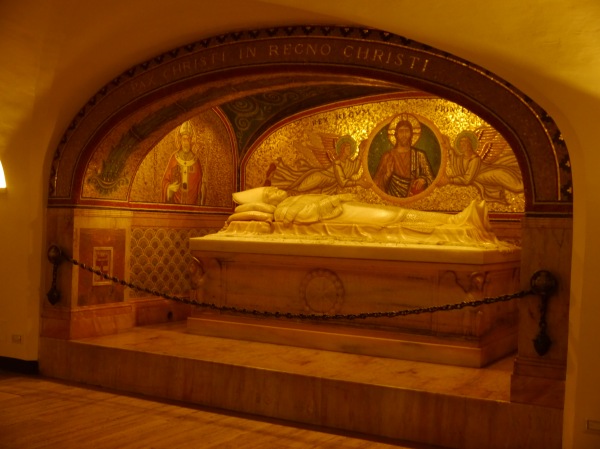 Former popes lying in wake in the crypts.

In front of St. Peter’s Basilica 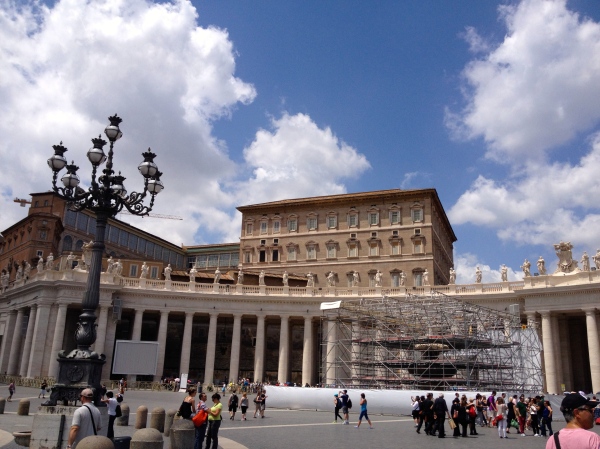 Yes, it was quite warm and as we had been walking around for a majority of the day – it was time for a mid-day siesta before we went on out much-anticipated food tour! If you go to Rome, you MUST do this…it was awesome and the food was amazing! We went on the Food Tours of Rome, and it was fantastic. As described on the website the tour, “begins in the Jewish Ghetto, a charming area densely packed with cultural and culinary treasures. See the Theatre of Marcellus, the Temple of Apollo, the Portico of Octavia, the Jewish synagogue. Then, the Campo de’ Fiori and Piazza Farnese, Piazza Navona, the Pantheon, the National Assembly, the Senate House and many more beautiful places including the Theatre of Pompey, where Julius Caesar was murdered.” What it doesn’t mention is the amount of food…seriously, it’s probably best to skip lunch. I was in PAIN by the end of it! But we’d had so much good food it was worth it! Oh yeah, and did I mention unlimited wine??

Smiling on the tour but our stomachs were SO full! 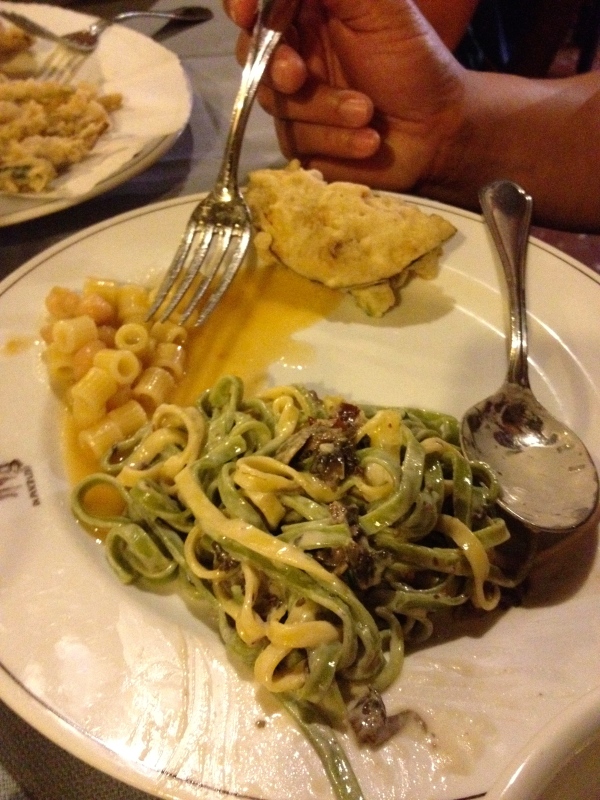 I believe this was stop three…yummy! 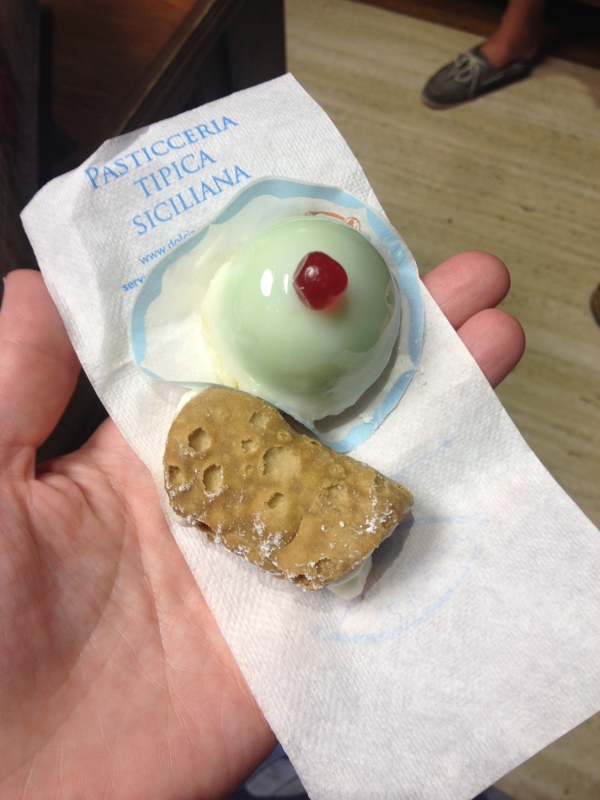 The green thing was weird tasting, but that cannoli…of man…so good! 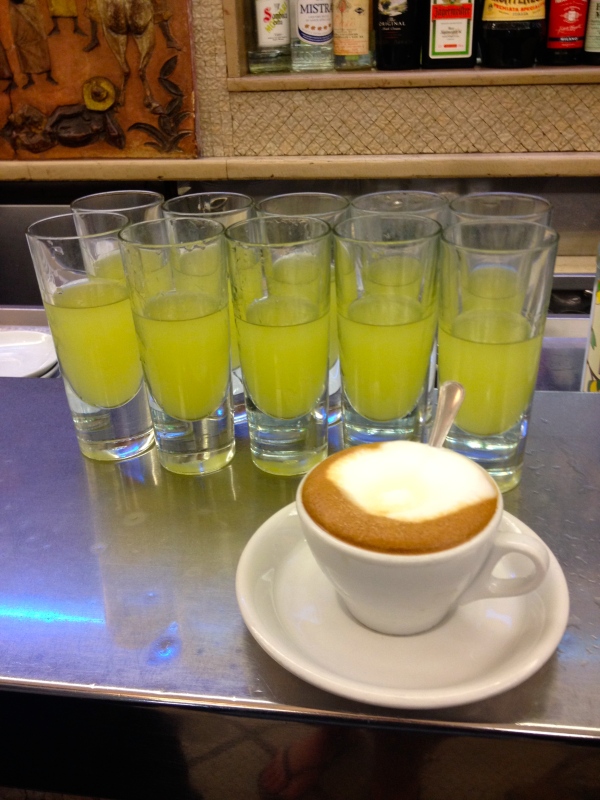 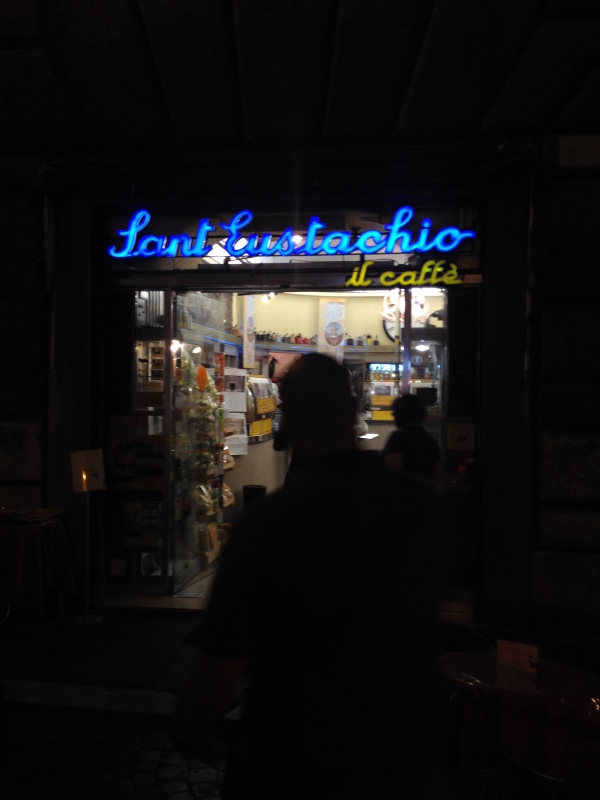 If you like cappuccino, do NOT miss this place while in Rome. Best cup I have ever had!

Ready to see the incomparable Colosseum!

If you want to see the underground areas, book MONTHS in advance! It’s quite difficult!

The Roman Forum from the Colosseum!

Entrance into the Roman Forum

Full disclosure? I didn’t really love the Roman Forum. It was a lot of ruins that was hard to imagine how it looked in its full glory. I really just wandered through but it didn’t enthrall me like the other sites of Rome.

Columns inside the Forum.

It was time for another break – Rome heat in the summer is exhausting! I wouldn’t let it discourage you from visiting if it works in your schedule, just make sure to add breaks into your itinerary!

Post break we made our way into the Mouth of Truth, made famous in the movie, Roman Holiday. Clearly I needed to visit it! There was a small wait to put your hand in the mouth, but it was small and the whole thing was silly so it was completely worth it!

The “Bocca della Verità,” whose legend says that if you tell a lie with your hand in the mouth it will be bitten off. Mine are fully intact! 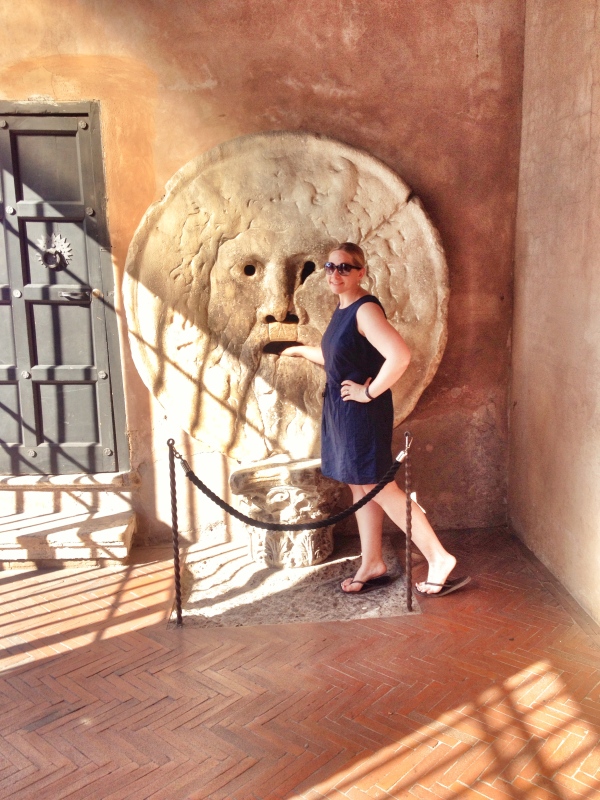 We headed for dinner in the Trastevere neighborhood, which is a must visit – not just for food but for the experience. It is a lively small neighborhood tucked away and a great way to spend a evening!

Dinner at a cute cafe off the main square!

Behind the scaffolding is the Trevi Fountain.

Oh well…onto the next one! The lively Spanish Steps…a good place to have a glass of wine and people watch!

Boo…more scaffolding! But the scene was fun!

Climb the stairs for this view of Rome! 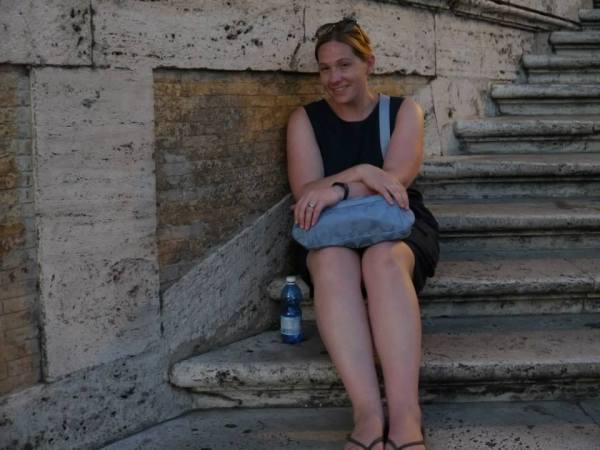 The steps are a good place to rest your legs!

We had one more stop before making our way to the hotel!

The Colosseum by night. Gorgeous! 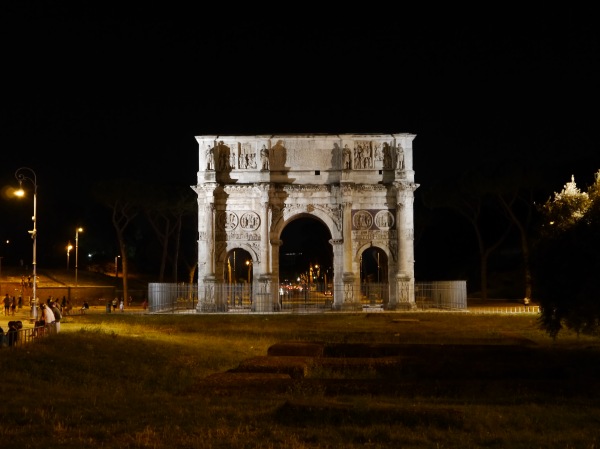 The Arch of Constantine.

Final Impressions: As with all of the cities in Italy I have visited, I loved Rome. I could put the heat and the crowds aside to really take in the entire city. You can easily get lost in the side roads, and visiting the many squares that just draw you in. We barely scratched the surface, but it was perfect and I knew I wanted to go back. I didn’t realize it would be so soon, but I can’t wait to experience Rome at Christmas under twinkling lights! I’m sure it is going to be just as amazing!