I adore Paris – and I didn’t realize just how much until we made our return trip to the city. I was more comfortable getting around, we weren’t on a crazy schedule and we were just able to enjoy the city – and it was amazing. More than that, it offered many surprises that I either forgot about last trip or didn’t even notice the first time around, making the return trip even that much more fun.

In no particular order, here were a few of the surprises:

1. Parisians are not early to rise. If there are people walking the Parisian streets before 9 a.m., they more likely than not are tourists. This is especially true Friday-Sunday, when the streets are empty with the exception of the occasional couple with a tell-tale map in their hands. This is actually an amazing time to get a feel for Paris – it’s quiet and peaceful and is the best time to really fall in love with the city. The only stores open are the patisseries (bakeries), the fromageries and the markets that have just opened their doors.

The empty streets at 8 a.m…what you can’t see right around the corner is the pub and restaurants that were rowdy until late in the evening…which may explain the quiet mornings!

2. Speaking of patisseries, Paris knows how to make a croissant. This must be something else I just didn’t pay attention to last year, because I completely forgot how delicious the breads were. Germany has amazing pastries, but Paris has the secret to creating buttery and light and flaky croissants and bread that simply melt in your mouth. Our hotel included breakfast, but it didn’t hold a candle to the corner patisseries that we visited every morning. It’s a good thing we did so much walking every day! 😉

The Viennese Chocolate bread was delicious!

3. Paris is exhausting. We figured out last year just how big Paris really was when we accidentally walked 10 miles the first day because we took a wrong turn. This year, however, I realize why that happened – Paris sucks you in. It is so big and vast but there is something new to see around every corner that you ignore your aching feet and keep walking! John and I were smarter this time and took daily afternoon breaks and used the metro regularly to rest up but it only slightly helped ease our tiredness. We also stayed in a different area this time around, putting us in the middle of the Latin Quarter and 10 minutes from Notre Dame, which clearly lent itself to us walking more than we planned. Totally worth it – we saw parts of the city we had no idea existed! And there is still so much more to see…

We took a much-needed wine by the Seine River break our first day…there are many ways to incorporate breaks! 🙂

4. Yes, Parisians can be that rude. John and I were majorly disappointed when we realized we couldn’t take our bikes on the TGV train with us to Paris, but were optimistic that biking was still an option as Paris has a vast rent-a-bike program. The problem came in, however, when neither our debit cards nor our credit card worked on the system (by the way – the only way to rent a bike as a tourist is with an American Express). Seeing as it was in French, John asked a girl who was renting a bike for help. Not only did she not acknowledge him, she didn’t even look at him. Completely ignored that he existed (and I would understand if he was a strange guy by himself trying to talk to her, but it was 10 a.m. and I was with him!) We encountered various attitudes but nothing that would ruin the trip – they really just, sadly, reinforced the long-standing stereotype. I don’t want to make sweeping generalizations, because there were friendly folks too, we just experienced a few more attitudes this time around. 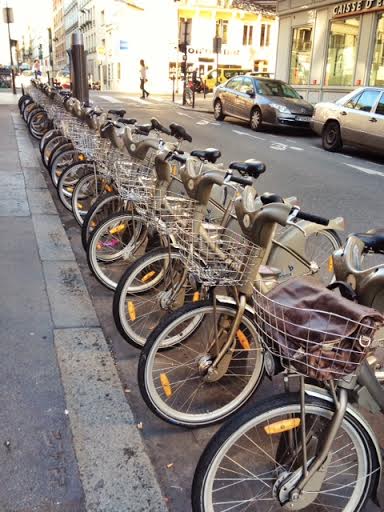 These bikes were almost taunting us by the end…come equipped with an American Express to ride one!

5. Even with the exhaustion and the less-than-friendly folks, Paris is amazing. John and I often discuss which places that we have visited that are our most favorite/least favorite and I always said Paris was in my top 3 although I couldn’t quite explain why…after this visit, Paris is absolutely one of my favorites (it switches positions with Cinque Terre often – it’s probably a tie) because it has adorable cafes and neighborhoods throughout, surprises around every corner and no matter how many times I see the Eiffel Tower, it is still cool. Last year, we were definitely on more of a set schedule to make sure we saw all the major sites (necessary because it’s better to buy tickets to a lot of them ahead of time!) but this year, we weren’t really held to any schedule – we did what we wanted and wandered, while mixing in a few attractions. And it made me LOVE Paris even more. I was sad to leave today – and already talking about a return trip. Because in the eight total days we have spent there, we have done some damage to the city but still have a lot more to explore! 🙂

We had a wonderful trip to a fantastic city…can’t wait for trip 3!