10 Dishes to Try in Germany!

1. Wurst (prounounced Vurst) – Germany LOVES its wurst (sausages)…so much so that there are more than 1500 different varieties made here. Personally, I’m partial to the Bratwurst. It originated in Nuremberg in 1313, and has grown since then. The “Nurnberger” consists of three small brats on a small brotchen roll, although there are many variations. And of course, if you don’t like the brat, you have 1499 other types of wursts to pick from! 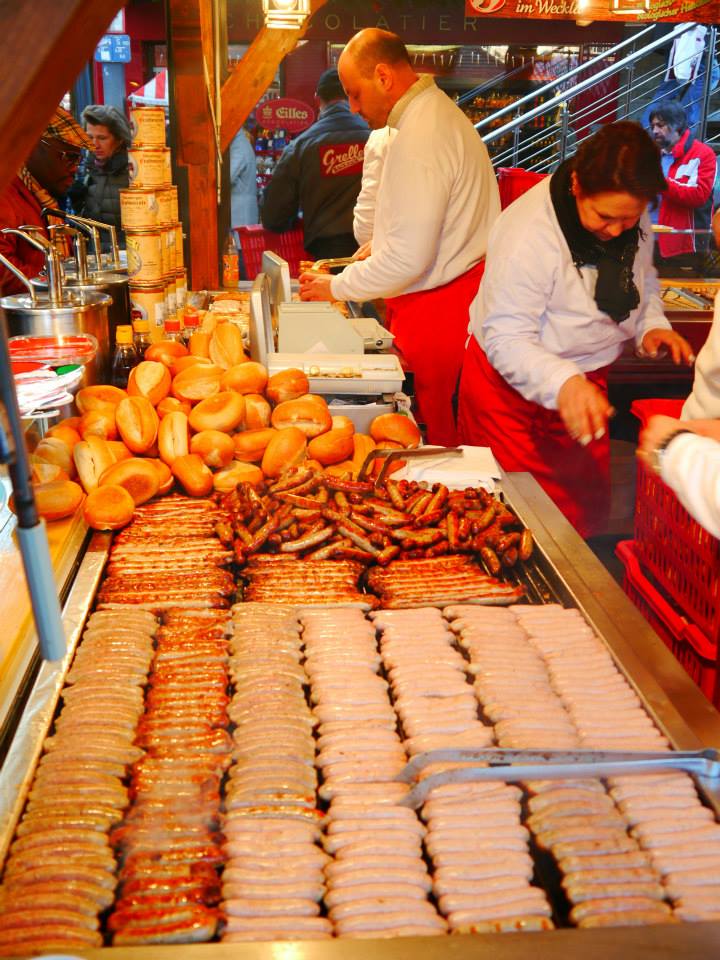 German wursts – so many to choose from!

2. Spatzle (prounounced Shp-ate-zel) – It’s really just fancy macaroni noodles, but tastes so much better. Add cheese to the dish and it is even better! 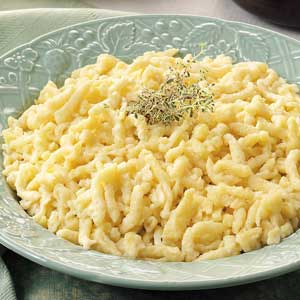 3. Donor/Youfka (prounounced Doe-ner/You-f-cah) – Depending on whether the owner is Greek or Turkish, the name changes but the dish is basically the same. I don’t eat these because the big slab of meat scares me a bit – but this is Germany’s version of fast food and everyone who eats them seems to really enjoy them.

This one classifies as a Donor.

4. Nuss Schnecken (prounounced News Sh-neck-in) – Or really any German pastry will do. This is one of my favorites, it’s a sweet roll with a type of nuts – but you really can’t go wrong with any of the options. German bakeries are wonderful and absolutely worth a visit. The pastries are yummy and even better, inexpensive!

Breakfast at a German bakery…so good!

5. Schnitzel (prounounced Vee-ner Schnizel) – I tend to avoid “Wiener” schnitzel because that is a veal tenderloin and stick with the pork variation instead. It is a thin, breaded and fried slice, normally served with “Pommes Frites” and a lemon slice. It is a good meal on a cool night!

6. Schweinehaxe (pronounced Sh-vine-a-hack-sen) – This is a ridiculously large fried pork knuckle that is especially popular in Munich/Bavaria. According to my husband, who has eaten this monstrosity, it tastes a lot like a pork rind with meat in the middle.

If you like pork rinds and meat – this will probably be your favorite!

7. Pizza – So, it may seem odd to go to Germany to eat pizza, but let me tell you – it is some of the best I have ever eaten! And so, so cheap! A quick google search revealed that in the late 1920s Germany experienced an influx of immigrants from Northern Italy. Italy’s loss is Germany’s gain! Look for the “Eiscafes” and treat yourself to a gelato afterwards!

Pizza Margerita…so simple and yet so yummy!

8. Brezeln (prounounced Brets-eln) – Handmade, fresh Brezeln (Preztels) are a staple in Germany and can be found in the beloved bakeries at a ridiculously inexpensive price. If you really want to eat it the “German” way, ask for a Butterbrezeln – a pretzel with butter in the middle. 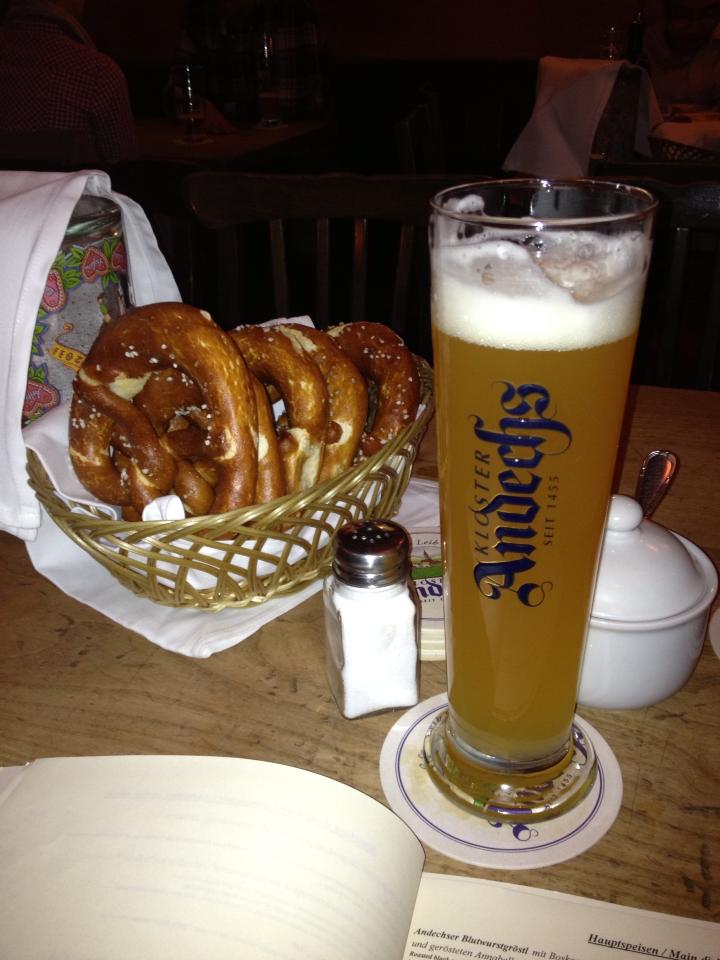 Pretzels and beer – the best appetizer!

9. Maultaschen (prounounced Mowl-tosh-in) – This is Germany’s version of ravioli, a pasta noodle filled with meat, spinach and veggies and was recently recognized as a regional specialty. I’ve had it once – in a soup form – but it can be found as a standalone dish or also in a sandwich.

In its standalone dish form.

10. Spaghetti Eis – I had seen this advertised in all of the German Eiscafe’s but wasn’t quite sure what it was and remained clueless until I finally ordered it one day. Basically, it is vanilla gelato in noodle form, topped with strawberry sauce and sprinkled with white chocolate flakes. Looks weird, tastes great…and apparently, according to a recent article I read, has started gaining traction in the states as well. 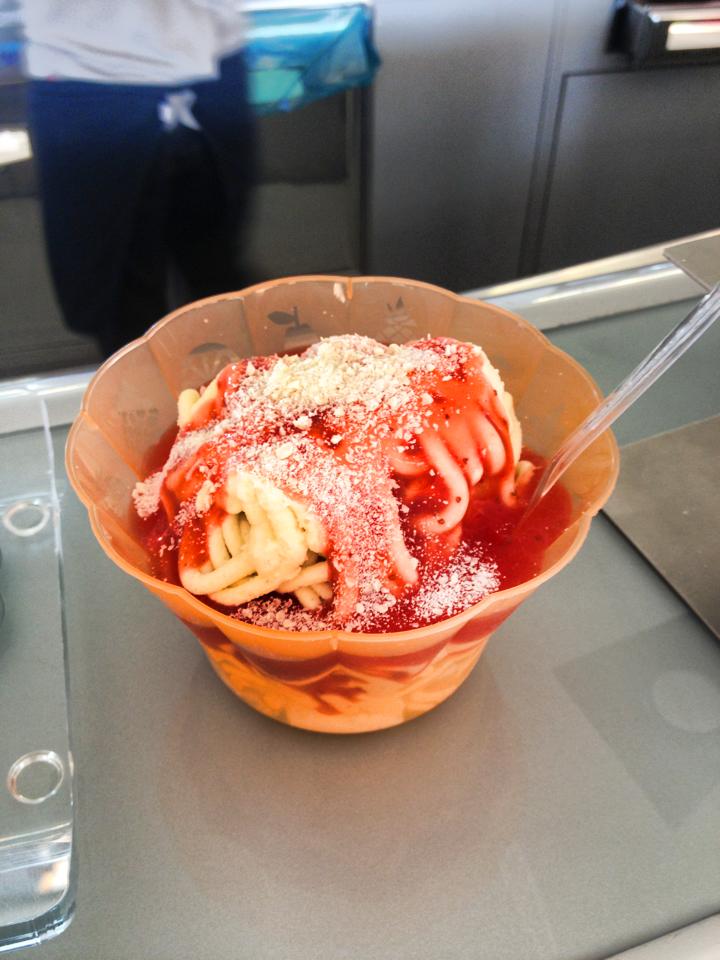