Where: Budapest, Hungary
When: February 2014
Hotel: K9 Residence
Why Budapest: To be honest, I’m not entirely certain why I wanted to go to Budapest, but it kept sticking out in my brain as a place to visit. So, I have no good reason other than it seemed like a cool city to visit, and it had a reputation for being fairly inexpensive.

One of our favorite trips by far! 🙂

The Trip: Being the road warriors that we are, an 8-hour road trip to Budapest seemed absolutely doable. This winter was surprisingly sans-snow and we rented a car for better gas mileage – throw in some snacks and we were all set! Road trips don’t bother John or I, but it’s always good to plan a stopping point to get in and stretch your legs, and since John had never been to Vienna, it seemed a logical choice.

The Palace-turned-museum in the main area of Vienna!

Vienna is about six hours from us, and although I had gone there in November for the Christmas Markets, I actually enjoyed it a little bit more this time around. It was probably because it was a Monday night outside of the tourist season, we’d been in the car for a while, and of course, John was there with me this time which always makes the adventure that much more fun. (It didn’t hurt that I also knew my way around so a 7-mile “we’re lost” situation did NOT happen this time!)

Vienna is a gorgeous place, and once you know where everything is – fairly compact. One of the prettiest churches that I have seen yet is in Vienna and is right in the main area so it is easy to find. It is a beautiful church to just sit and look around in awe at the amazingly ornate features that make up the inside. 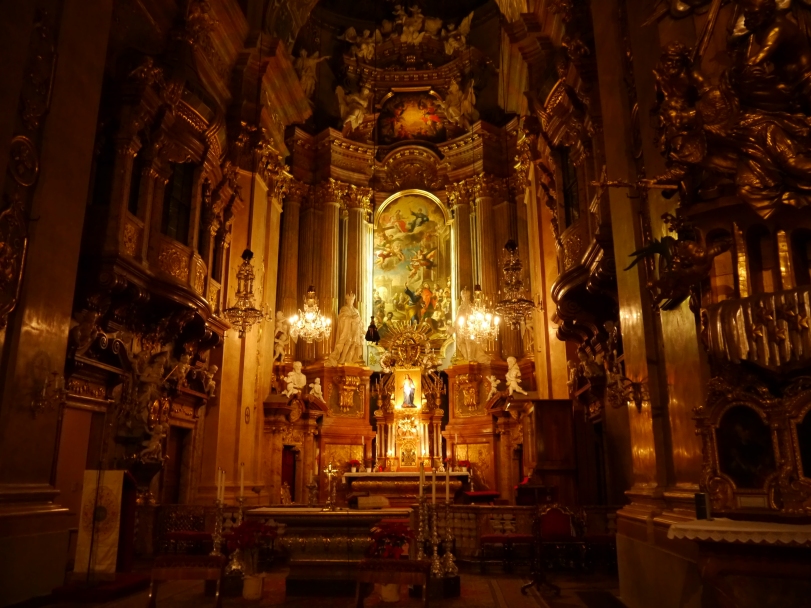 So incredibly pretty inside!

Of course, this popular site isn’t too shabby either: 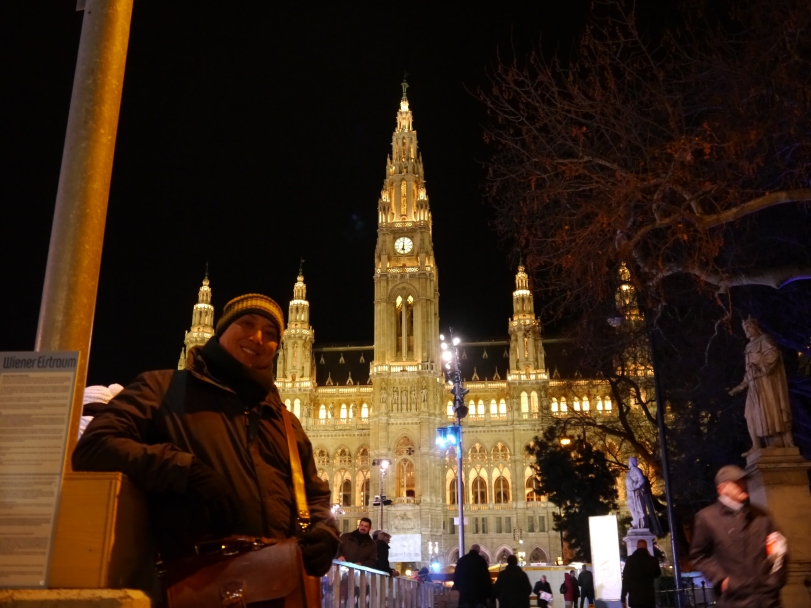 John in front of the incredible Rathaus, or City Hall!

Before heading to Budapest, I had picked up a city map from our local USO, printed a copy of the Metro Station and had my trusty Tripomatic walking plan – all of which proved exceptionally handy, especially the Metro map which was key when our first plan of walking from place to place got rained out. It was a double-bonus when we found out that the hotel we were staying in was close to pretty much everything we wanted to see. A note about accommodations in Budapest – the hotels get a bit pricey but most of the places you can stay are actually apartments, which is the way to go. We only paid $129 for three nights and we were in the main part of the city near all the historic sites. With free internet and off-street parking, the apartment option was unbeatable! 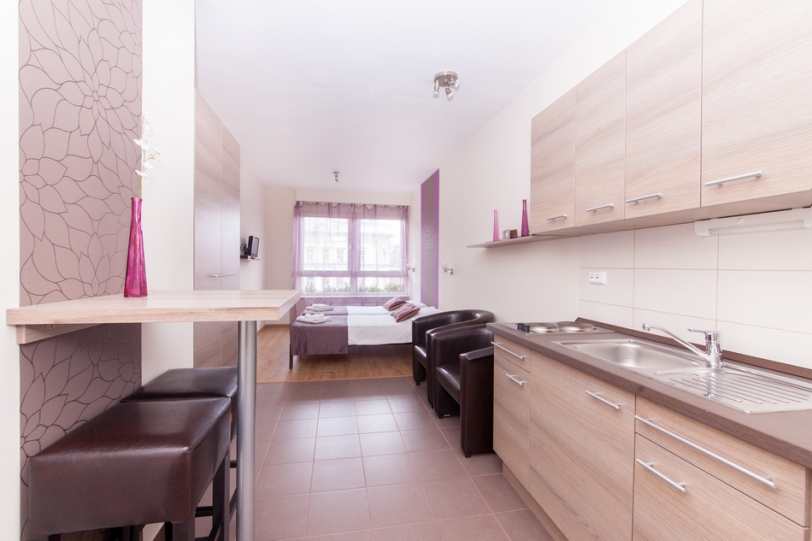 The inside of our hotel/apartment

The first order of business was hitting the Historic McDonald’s, which sits in the middle of the main pedestrian area of Budapest. This McDonald’s was the first McDonald’s to appear in the Communist-controlled countries and therefore was visited by many behind the Iron Curtain.

Probably one of the cleanest McDonalds we have ever been too – and surprisingly, there was nothing marking its place in history. If you didn’t know before, you would have never know!

Looks like a hamburger, no? Well, it’s a sausage patty made up to look like one! Weird!

The downpour picked up as we ate breakfast and didn’t let up as we started to head toward the Parliament building. The key to any trip – be flexible when something doesn’t go exactly to plan. Had it all worked out, we would never had discovered the super cheap Metro pass and would never have gotten to take a ride on the adorable Metro Line 1, which is the second oldest underground railway in the World and a recognized UNESCO World Heritage Site! 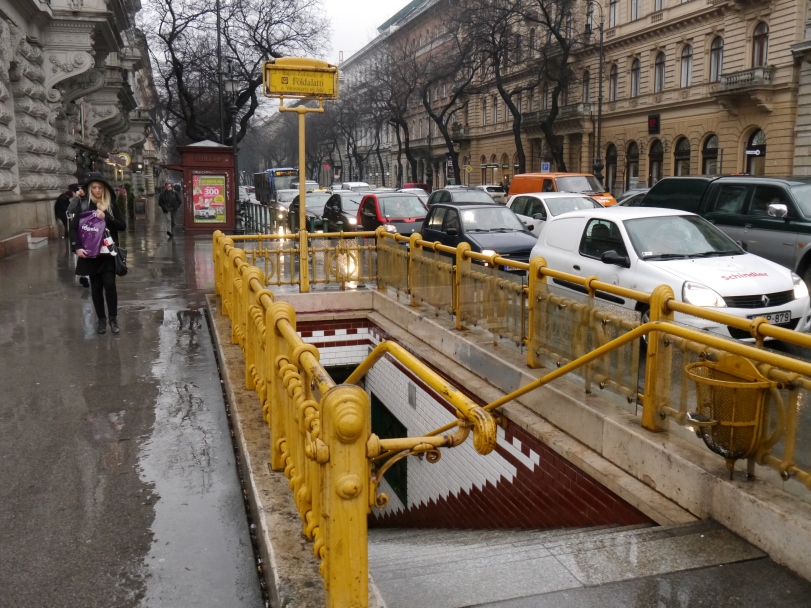 Entrance into the historic subway!

Definitely one of the quaintest subway stops!

One of the not-to-be-skipped experiences is enjoying one of the Turkish baths, and although we were going to wait until after we’d spent the day site-seeing we made a game-time decision to instead escape the rain and make our way in that direction! We found our way to Heroes Square at the end of Andrassy Avenue – Budapest’s answer to the Champs Elysees – which leads into the park where the Vajdahunyad Castle and the Szechenyi Bath can be found. 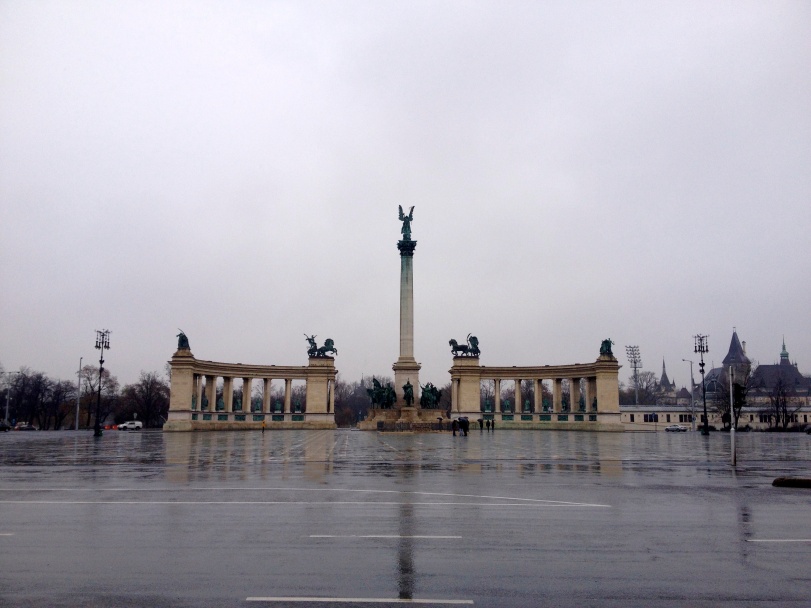 Heroes Square – quite impressive, even on a rainy day! 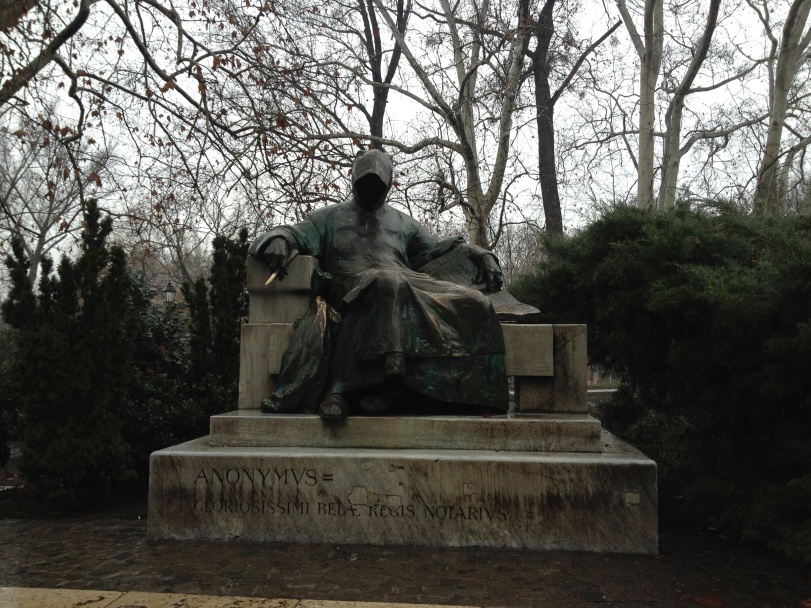 The Anonymous statute in the City Park behind Heroes Square – legend has it that if you touch the pen, you will have the gift of writing…so we did!

Our main destination! The Szecheni Baths!

Amazing on a cool day! The water was so warm that the steam was so thick at times you thought you were in by yourself!

Do NOT plan on going to Hungary if you are not prepared to eat Goulash. And if you want good Goulash, go to Café Kor. It is around the corner from the beautiful St. Stephen’s Basilica, which is absolutely worth the 1,50E entrance fee and was so yummy and cost so little that we actually ate there two days in a row!

I had no idea Hungary was known for its red wine – and it was so, so good!

If you really want to see Budapest at its most amazing, take a night cruise. And then end the night in one of the famed Ruin Pubs – probably the coolest bar I have been too yet!

Heading out on our river cruise, through the Legenda Cruise Line!

The Buda Castle at Night…so pretty! 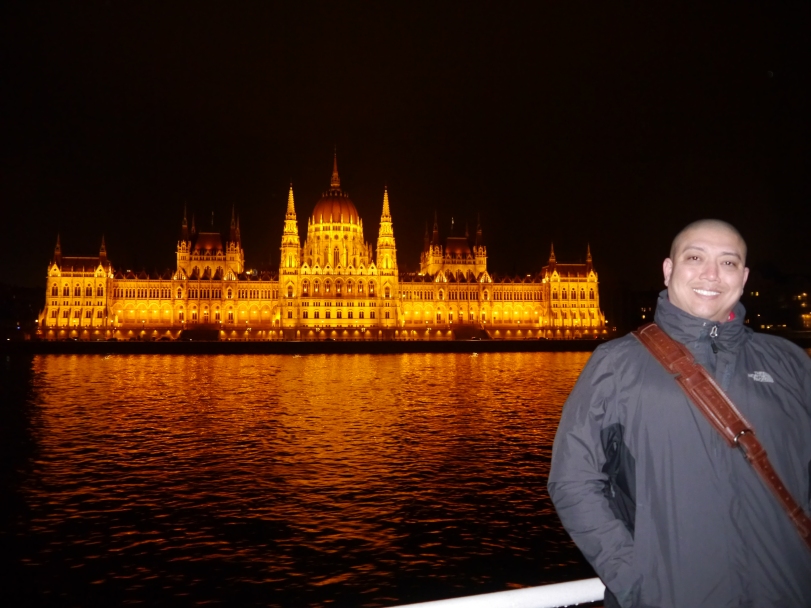 John in front of my favorite building in Europe! There is honestly nothing like it!

Inside the Ruin Pub – which was created out of old Communist buildings that were never renovated. Instead, people “squatted” by building bars and decorating with random things in various rooms!

Budapest is actually two sides – Buda and Pest, and it’s best to plan to spend one day on one side, and one day on the other. The Pest is the flat side where we spent our first day and we headed to the hilly Buda for day two. Now, once we got a handle on the Metros, that was our mode of transportation for exploring Buda – save your legs because there is a LOT of walking.

The Buda Castle – our destination for Day 2!

Starting day 2 admiring my favorite building from across the Danube River! 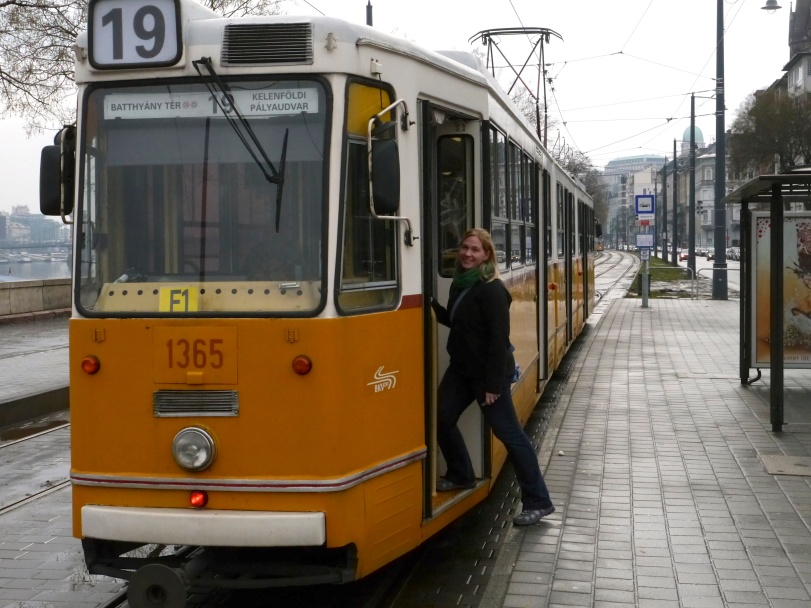 Hopping one of the above ground trams to get us to the Buda Castle! 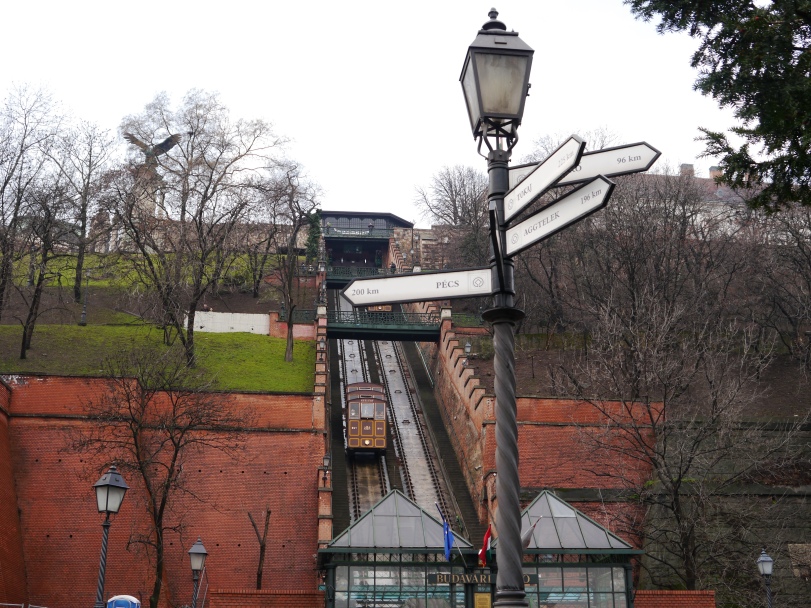 Save your legs, take the funicular!

Pretty view of the Chain Bridge and the St. Stephens Basilica!

Even the gray skies couldn’t ruin the view! 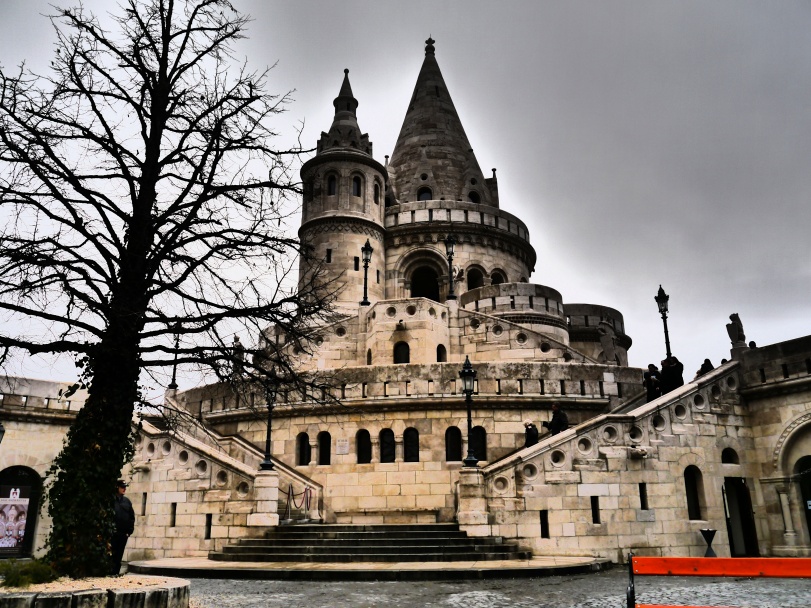 The Fisherman’s Bastion, which is a short walk from the Buda Castle! 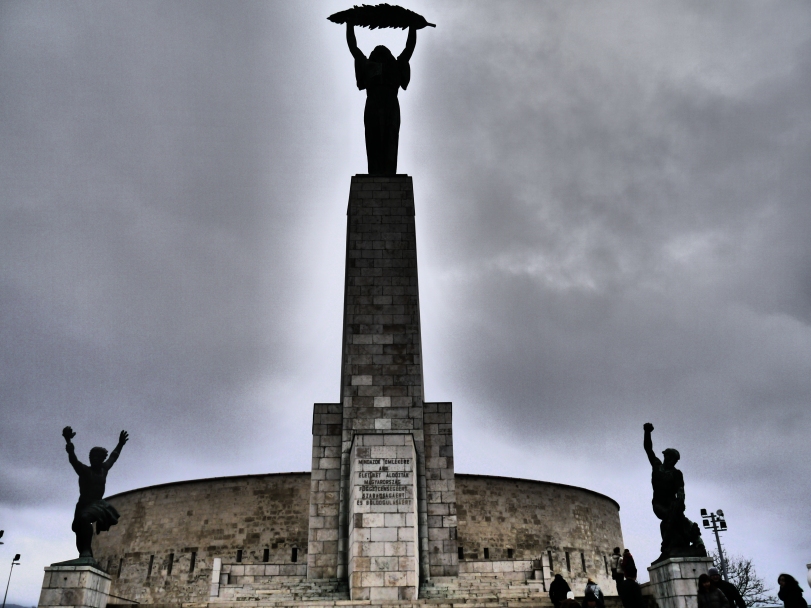 Millenium Statues at the Citadel on top of Gellert Hill…the monuments and the views were unbeatable!

I was so sad to leave the next day because I wanted more time there! Both John and I agreed that Budapest was one of our favorite trips, and if we get the opportunity, we would definitely go back!

Final Impressions: Take advantage of the METRO, eat some Goulash and drink some Hungarian Red Wine, soak in a Turkish bath and converse with the friendly locals. And if none of that appeals to you, take a look at this: 29 Reasons Budapest is the Most Beautiful City in Europe. It truly is a beautiful city that is only recently starting to get the recognition it deserves – and as it is well within driving distance of Prague and Vienna, a trip to three of the prettiest cities in Eastern Europe is not out of the question. Bonus!