Where: Cinque Terre, Italy
When: August 2013
Hotel: Ca da Iride (B&B)
Why Cinque Terre: Thanks to Pinterest, I kept seeing these pictures of this place in Italy that I had never before heard of before but that I put on my “Must See” list almost immediately. The water was so incredibly blue and the towns looked so colorful and pretty built into a mountain on the Italian coast. I was dying to go and knew I would love it even before we decided on a weekend to go! 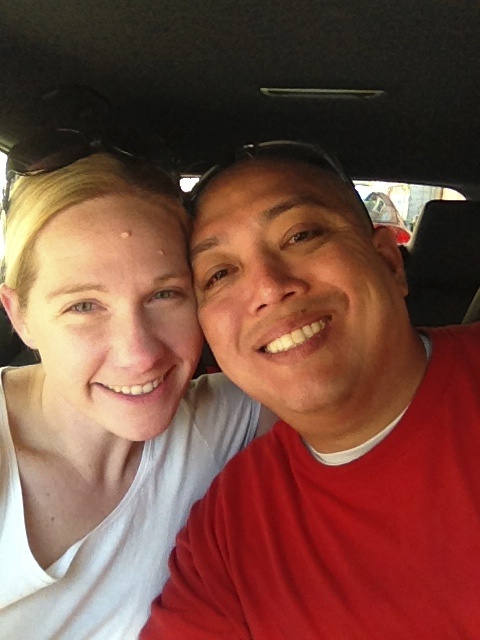 On our way to Italia!

The Trip: I’m going to say it right away – no matter what I say about Cinque Terre, it won’t even come close to truly describing what an enchantingly wonderful place it is. I’m going to have to really scrape my brain and use thesaurus.com to a maximum for all of the different ways to say “wonderful” and “amazing” and “magical.” But even then, it won’t capture the experience of walking around the towns, swimming in the Mediterranean Sea and eating some of the most delicious food I have had in recent memory.

The drive from Stuttgart to Riomaggiore, the town in the Cinque Terre area that we were staying in, is about a 7.5 hour drive if you listen to Google Maps. In Europe, though, add at least 90 minutes to two hours to any Google Map estimate. Especially when the drive takes you through Switzerland, because you will inevitably want to get out and take pictures. We got a late start to the drive, which in the summer isn’t a big deal because it stays light until nearly 10 p.m. here, and I was happy the drive took us through Switzerland. John was back in the States when I went with work friends and I knew he would think it was beautiful. 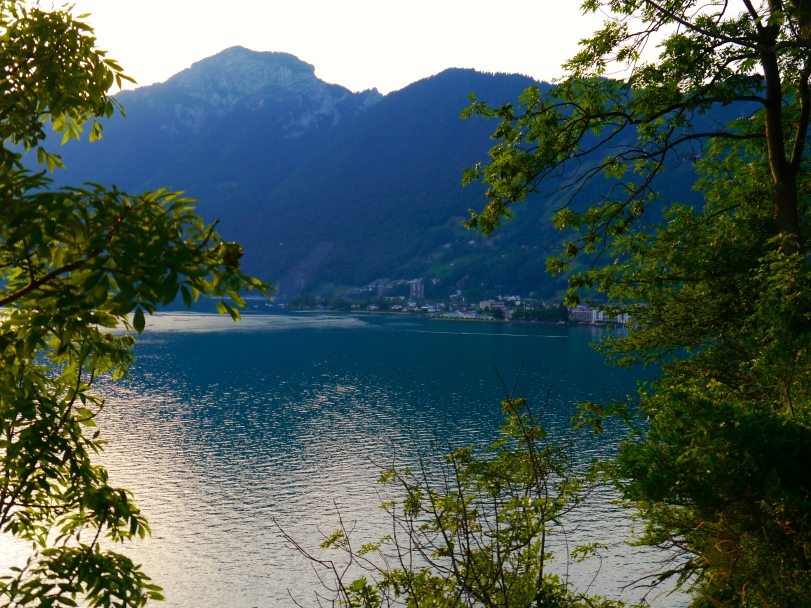 More Switzerland. John and I were curious what people who live there get excited about because the country is so beautiful.

We hit Switzerland late in the afternoon and it was just as gorgeous as I remembered. It is truly a breath-taking country. Unfortunately, the late start combined with our stops in Switzerland meant that we didn’t cross over into Italy until very late in the evening and from there, still had about a three hour drive to our destination and by the time we pulled into Cinque Terre – there wasn’t much to see! 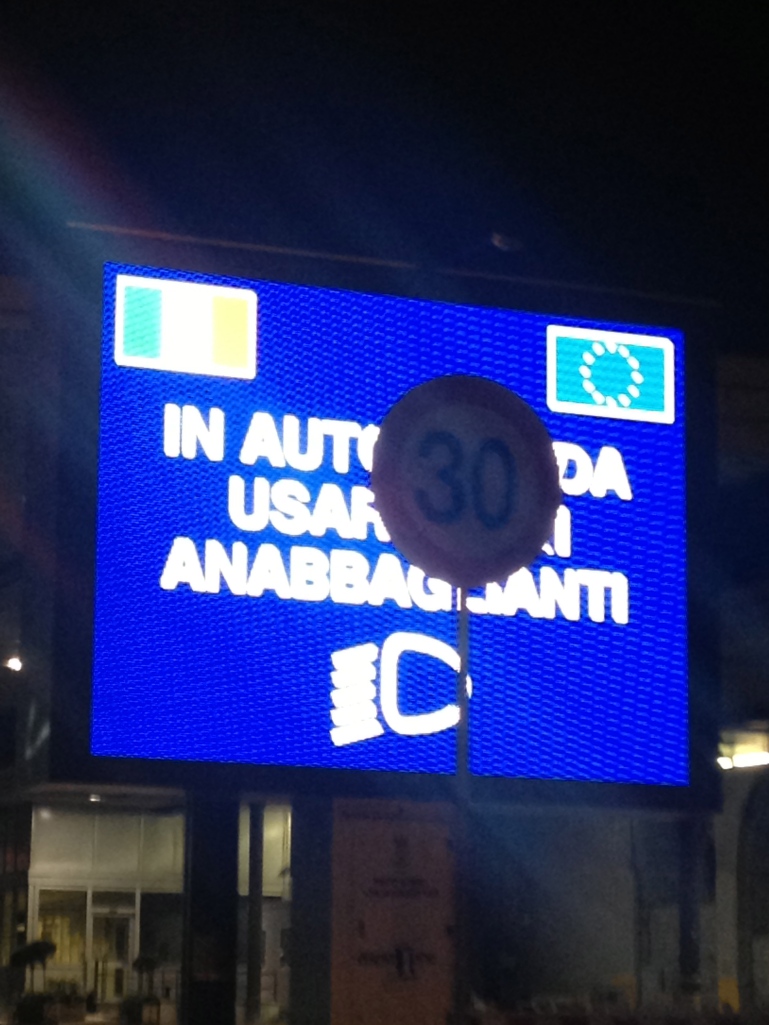 Crossing the Italian border – this was the best shot I could get!

The next morning made for an amazing day – and was a pretty spectacular introduction to Italy!

Cinque Terre is a UNESCO World Heritage site, made of five towns that are linked together through trails and railways. We stayed in Riomaggiore, which is the first town of the five. It, along with the next town over, Manarola, were our favorite towns. We found what we considered the best swimming hole in Manarola and spent hours there for two straight afternoons just relaxing in the Mediterranean Sea – which was saltier than expected, which meant we could just tread in the water without getting tired. We met a group of Americans the first day and spent time talking while soaking up the sun in the crystal clear water. It was heaven on earth. 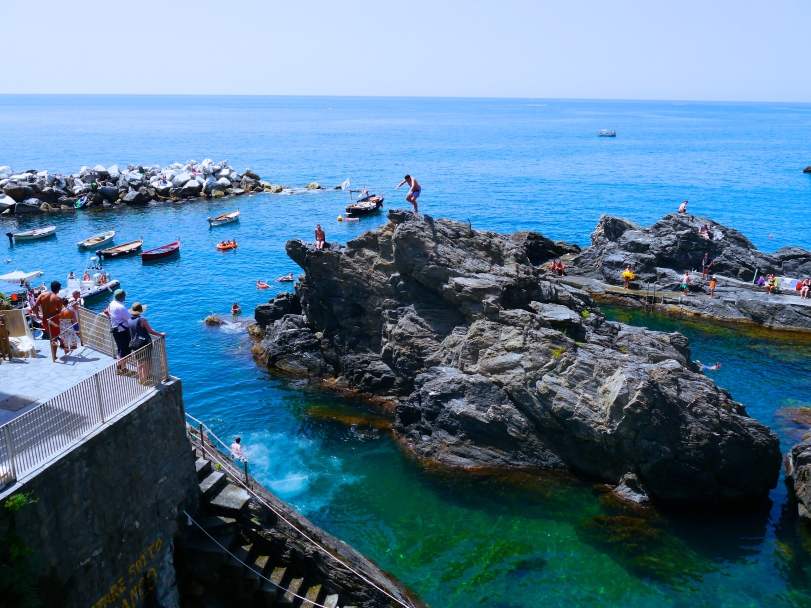 We spent two afternoons on this “beach” – I have to admit, I prefer the rocks to the messy, get everywhere sand!

We visited this Gelateria in Manarola twice. It was the perfect treat after swimming! 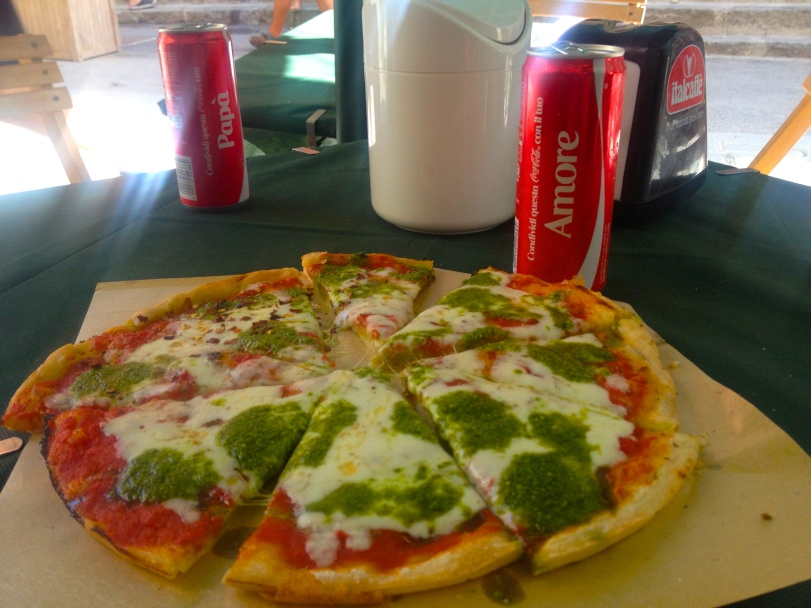 The pizza, oh the pizza…it alone was enough to make me want to go back! 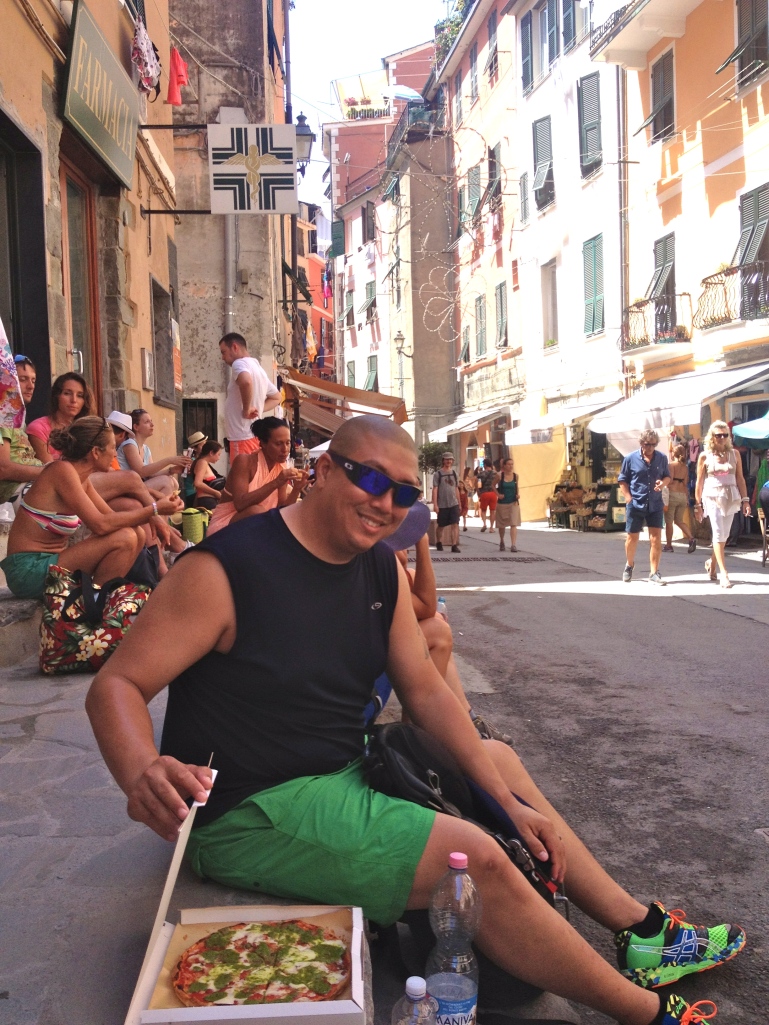 One of my favorite memories – eating a to-go pizza on the street corner and people watching!

The region surrounding Cinque Terre created Pesto…and it was the best pesto I had ever had. Here’s a tip – buy it in the grocery store and when the grocer asks how many people you want to feed with the pesto, double the number! You will want more than what you get! 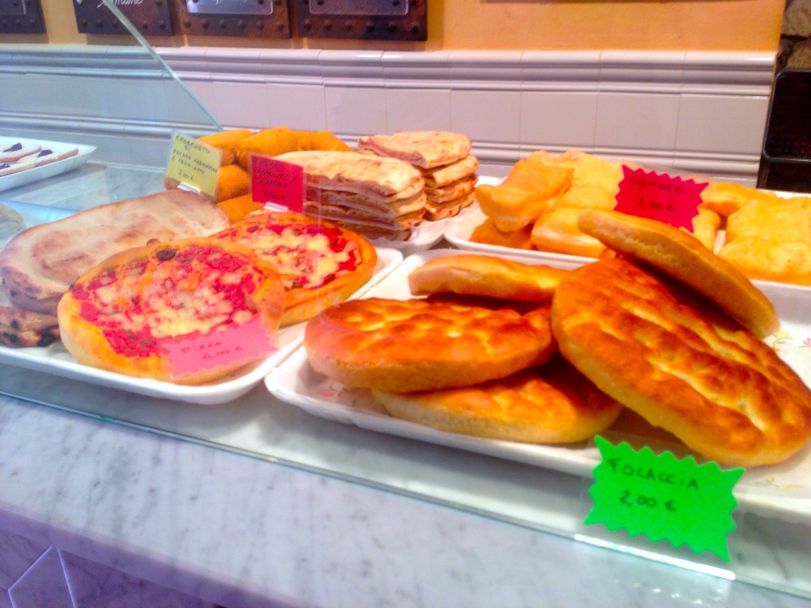 The foccacia bread also originated in the Cinque Terre region and makes an excellent companion to the pesto!

Limoncello! It was everywhere – although we still haven’t tried the bottle we bought while there!

We opted to use the railway as two of the five trails were closed because of recent mudslides. Unfortunately, the two that weren’t open were the ones we would have hiked…the others were much more strenuous than we, or our shoes, were prepared for, and so the dependable railway became our good friend as we bounced from town to town. After Manarola, there is Corniglia, which we opted to bypass as it is the only town without direct beach access and our innkeeper seemed less than enthused about the town that even after taking the train to get too still requires a hike up hundreds of stairs. We adored Vernazza simply for the Pesto Pizza with Foccacia crust that we ate two days in row, and Monterosso, the last town in Cinque Terre, was fine – but much more commercialized and touristy than the other towns and so we spent less time there.

Riomaggiore! The town we stayed in – one of our favorites. The 20-minute trail that led from Riomaggiore to Manarola had been closed down because of an landslide. 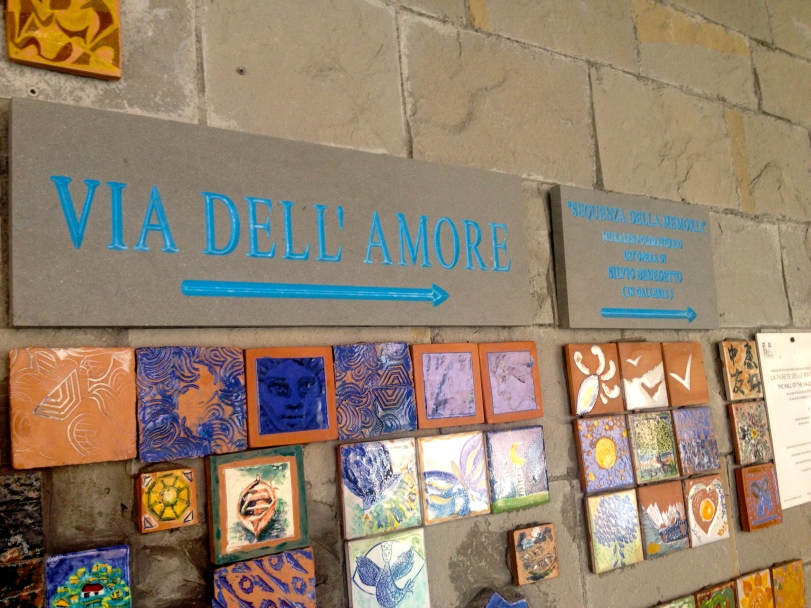 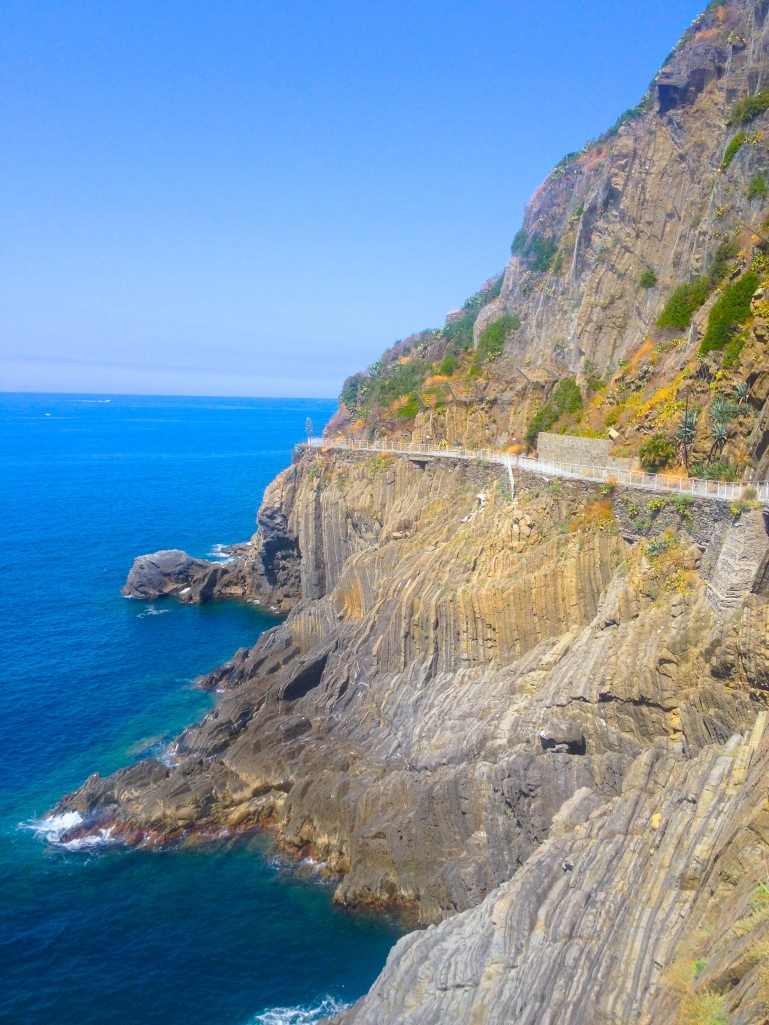 Amazing. So sad this trail was closed – it would have been great to walk it! 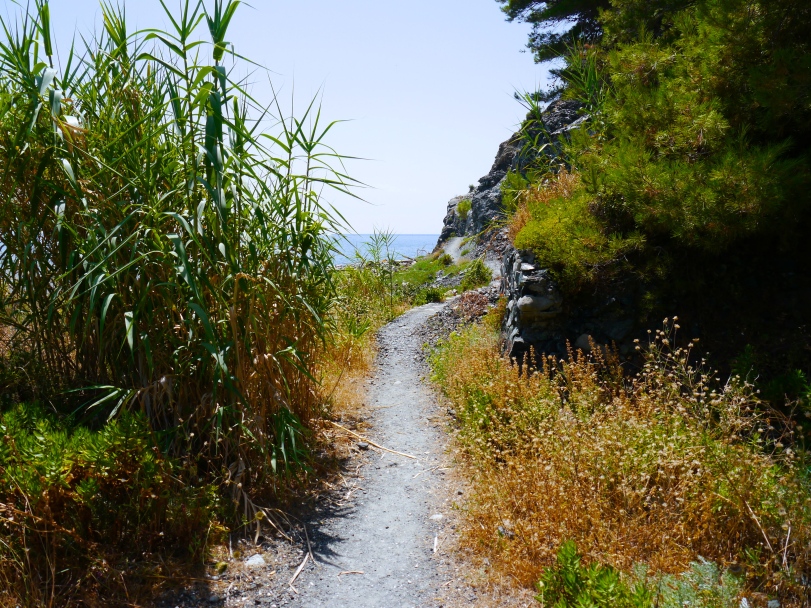 A lot of the sections of the trails looked like this, so we only did a mini-hike around Monterosso.

Vernazza, which was devastated by mudslides in 2011, has managed to rebuild. We found the best pizza place here!

A view of Monterosso from one of the trails.

John hiking. It was a good way to work up a sweat before swimming! 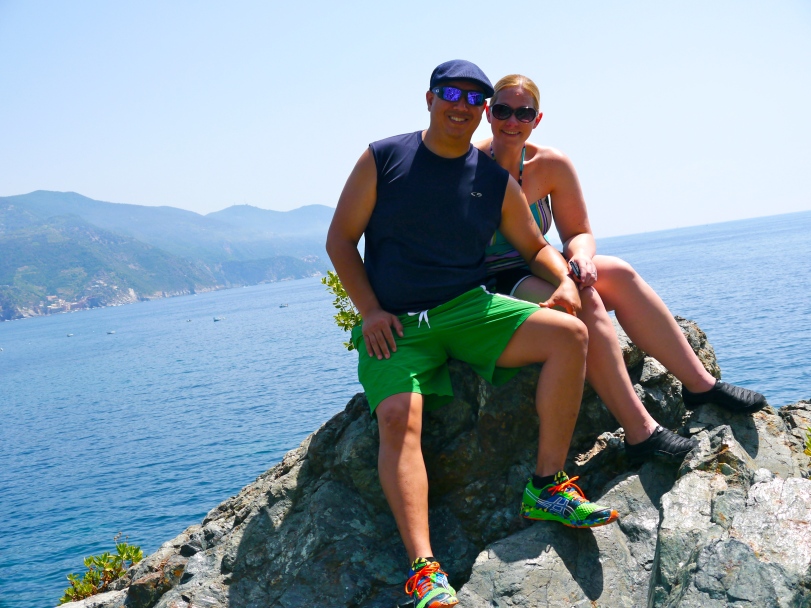 First time getting the self timer on our camera to work! I love it!

My absolute favorite picture – it captures the stunning, colorful, inviting place that is the Cinque Terre region. This is a view of Manarola.

Our last night, after a dinner of foccacia, pesto and wine, we strolled around Riomaggiore, enjoying the sunset with awe and taking in the town one last time. One part I truly loved was that because it was a UNESCO site, that means very little new construction can be completed in hopes of keeping its natural and historic beauty – therefore there are no weird buildings among the beautiful, colorful ones and there isn’t a ton of commercialization. Cinque Terre is just a place to experience, to relax and to enjoy what is around you instead of rushing from one place to the next. It is simply amazing.

There is truly nothing that can beat this sunset. 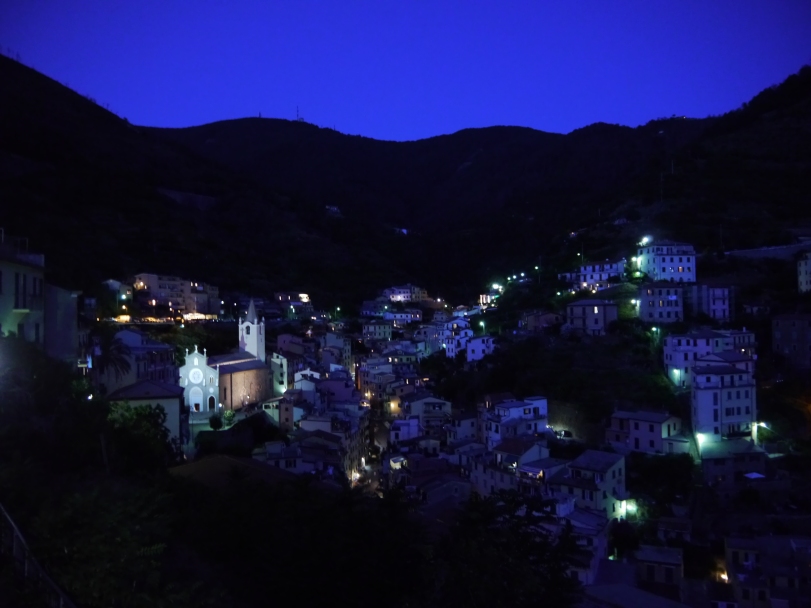 Riomaggiore was so peaceful at night.

The next morning I woke up truly sad to leave. I would have loved more time there!

On our last day, we decided to make an hour detour from our trip home to see the famous Leaning Tower of Pisa. It really does lean – the pictures don’t lie! And on our way home, we got to see the the Italian countryside that we missed on the way down – news flash, it was gorgeous.

Doing my best to hold it up!

Final Impressions: Even as I write this, I’m trying to figure out a when we can go back. Cinque Terre is one of the handful of places that I can say truly stays with you after you leave. I know how cheesy that sounds but unless you have been there, you won’t understand – which translates into go, immediately. You will stay in a B&B type place because overpriced hotels haven’t hit a majority of the town, you will meet the laid-back Italians and you will eat food just as good as everyone says. You won’t rush, you won’t worry, you will simply relax and enjoy everything that Cinque Terre has to offer. It is magical and we will go back!