Where: Prague
When: Late April – Early May 2013
Hotel: Cloister Inn Hotel
Why Prague: Why not Prague? Again, Prague, like Munich, Prague was a city that I had no feelings toward one way or another. But in throwing around different names of cities, it seemed like a good choice to visit. Prague is an easy five hour drive, and without a good handle on what we would be seeing we planned a 2-night trip to what is now the capital of the Czech Republic! Looking up the history of Prague, the easiest way to explain what the city has been through is to say that it was an oppressed town, mainly by German rule through the end of World War II until it was under communist control through the demise of the Soviet Union. It split from Czechoslovakia in 1993, and is now the capital city of the new country. Still, and luckily for everyone who visits, it has maintained much of its beauty

Prague is beautiful, easily accessible and a town I would most definitely visit again. It’s an easy drive that took us to the northern part of Germany that we hadn’t seen before. This was still in our early travel days, so it was (and let’s be honest, still is) exciting and a little unbelievable to just be driving to Prague (or Praha) that we had to get a picture of the sign. 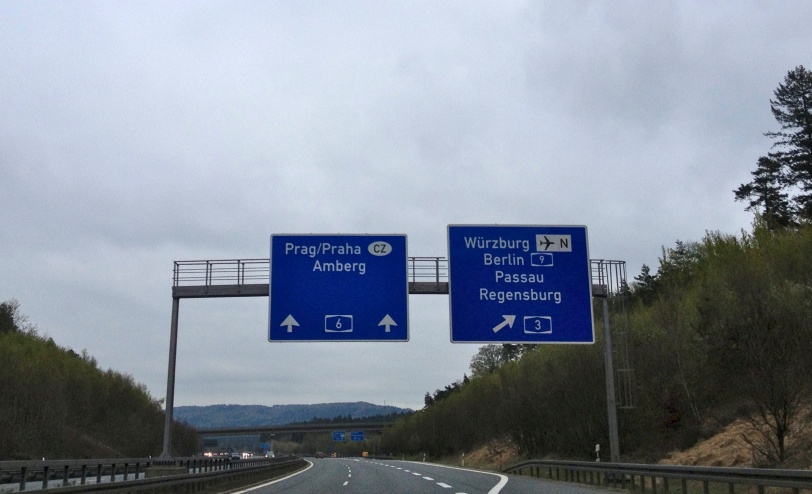 We had gotten a little bit later of a start than we wanted, so we didn’t get into Prague until late in the evening. Upon driving into the city, (after buying a Vignette – 18E for a sticker that is good for a year, guaranteeing you won’t get a 160E fine for driving in the Czech Republic), John and I both looked around in awe, agreeing that Prague was probably one of the prettiest cities we had ever seen. 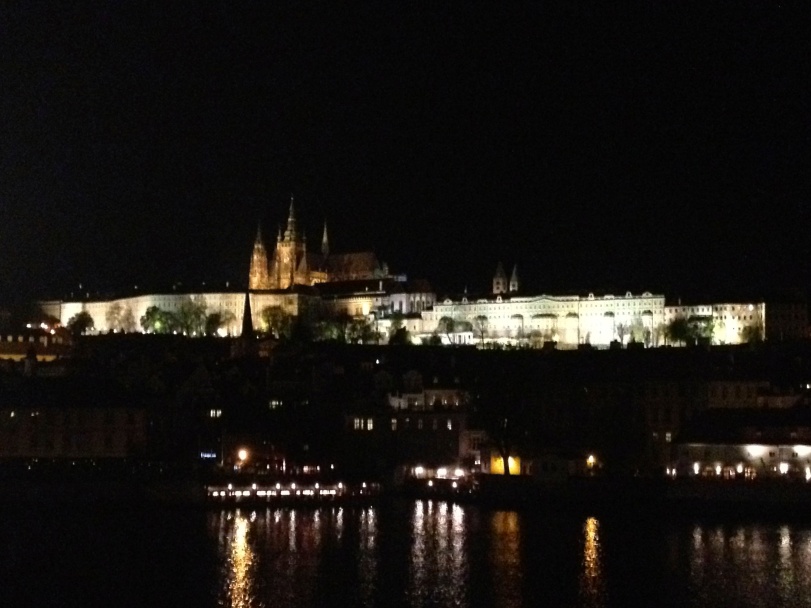 The Prague Castle at night.

Prague is a fairly affordable city – they still use the Crown instead of the Euro, and the exchange rate was 1 Crown = 18 dollars when we were there, which meant we could stay in the Old Town for not a lot of cost. Again – an important feature, always try to be in walking distance.

The Cloister Hotel – on a seemingly quiet side street until a gaggle of drunk older ladies wakes up their friend in the room next to you by singing, loudly, at 3 in the morning. The hotel was nice enough to move us to another room!

The next day, we were greeted with a bit of a surprise…a nice, loud “BOOM” that honestly felt as if a bomb had gone off. Our hotel shook, and the change in air pressure could be felt in our room. I walked out of the bathroom, looked at John and we were both like, “So, time to go!” We traveled to Prague the week of the Boston Bombings, so we were a little on edge. In fact, we were supposed to go to London, but because it was the same weekend of the London Marathon, we changed our plans to be on the safe side. Possibly overly cautious, until the explosion in Prague. We looked out the window, and saw no one running, heard no screams so we thought we would see what happened and make a decision from there. As it turns out, it was a gas line explosion around the corner from our hotel. Thankfully, no one was hurt and we could enjoy the city as planned.

This building was one of those caught in the gas explosion – literally around the corner from our hotel. You can see the windows blown out.

The best place to start in Prague is the Wenceslas Square and move to the Old Town Square,  a five minute walk away. Its main feature is the beautiful Astronomical Clock. 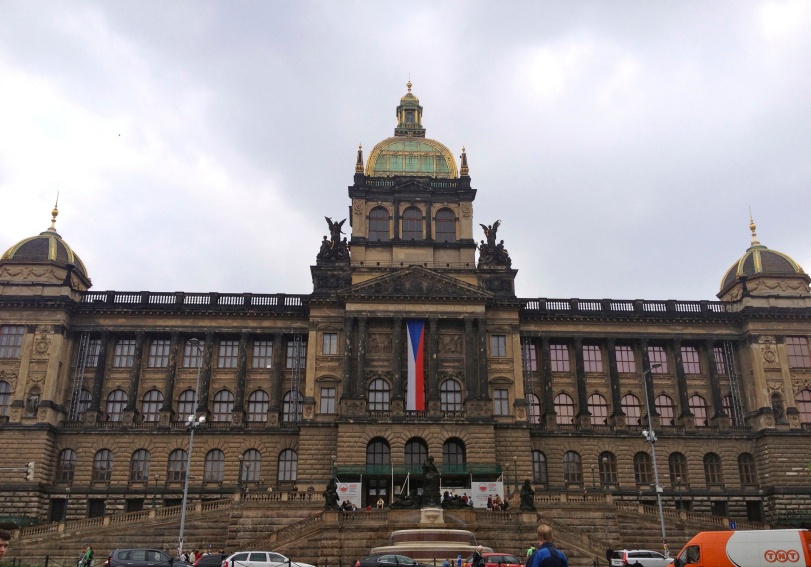 Moving on to Old Town Square:

The Astronomical Clock – that still runs, although we didn’t make it to the see the show!

The Jan Hus statute in the middle of the square. He was a famous Prague reformer.

We had planned on taking one of the free Prague Walking Tours (free until the end when you give a tip), but both John and I lost a bit of interest after 45 minutes of not moving from the square – so, we bought our own guidebook and went on our way!

The main attraction – aside from the castle, which being on a large hill is hard to miss – is the Charles Bridge. It is a pedestrian only bridge that runs from New Town to “Lesser Town” (yes, that is the translation!). It is lined with religious statutes and vendors have set up shop along the route.

With the Charles Bridge in the background. 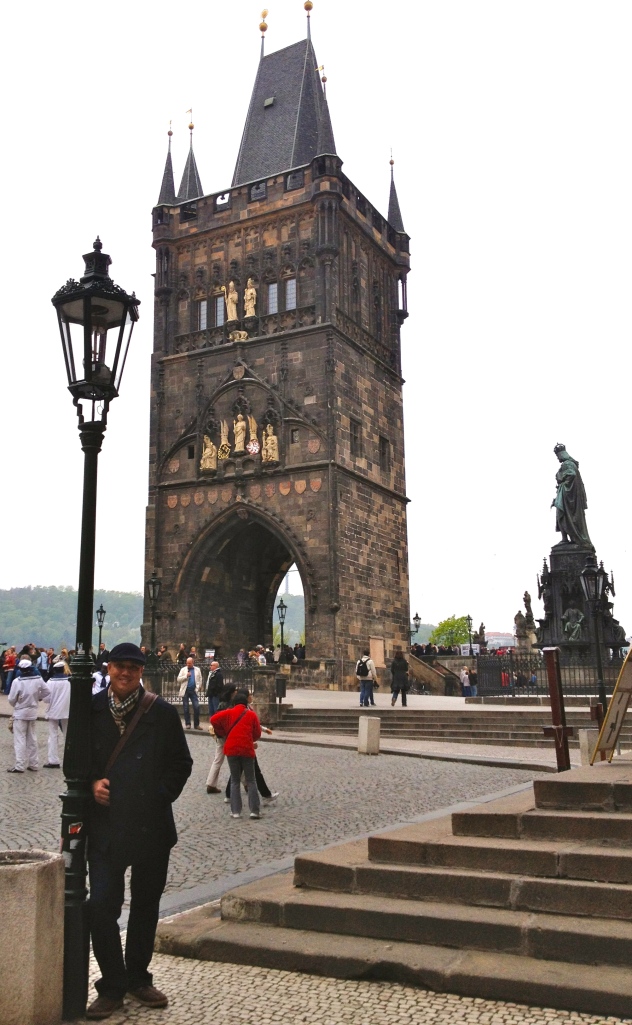 The entrance to the Charles Bridge. 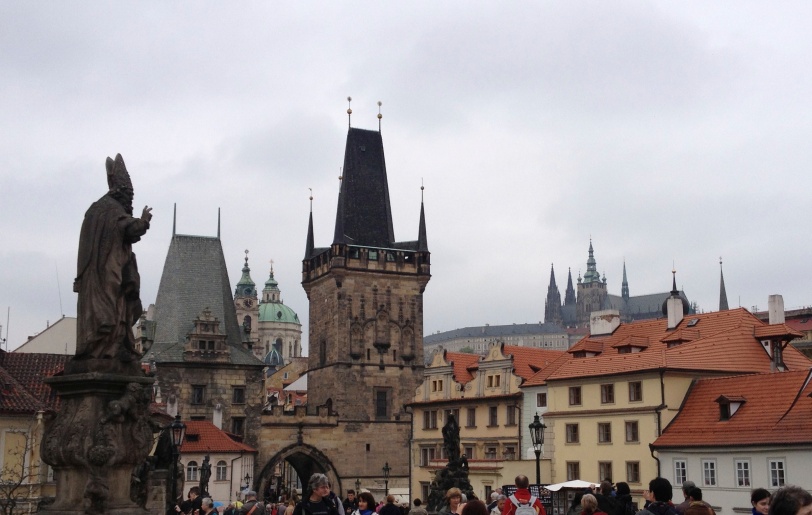 On the Charles Bridge looking at the Lesser Town and the Castle.

If you are going to buy souvenirs, buy them in Lesser Town – it’s amazing how much the prices dropped just crossing the bridge but it really was much more affordable. Prague is one of the less expensive towns we visited, but they have still figured out the exchange ratio, so just make sure your math is right before buying anything! (I collect Starbucks mugs, and the conversion turned the normal $10 mug into $18!!!)

The walk up to the Prague Castle is a little bit of a hike, but nothing that isn’t manageable! Plus, it is so worth the trip up!

The Prague Castle from the Charles Bridge

According to the Guiness Book of World Records, the Prague Castle is the largest ancient castle in the world, which is believable. It is a compound like, with several stops within the gate, including the castle itself, a large cathedral, a couple of chapels, and converted servants row houses, now called, “Golden Lane.”

The gates into the castle…only slightly intimidating! 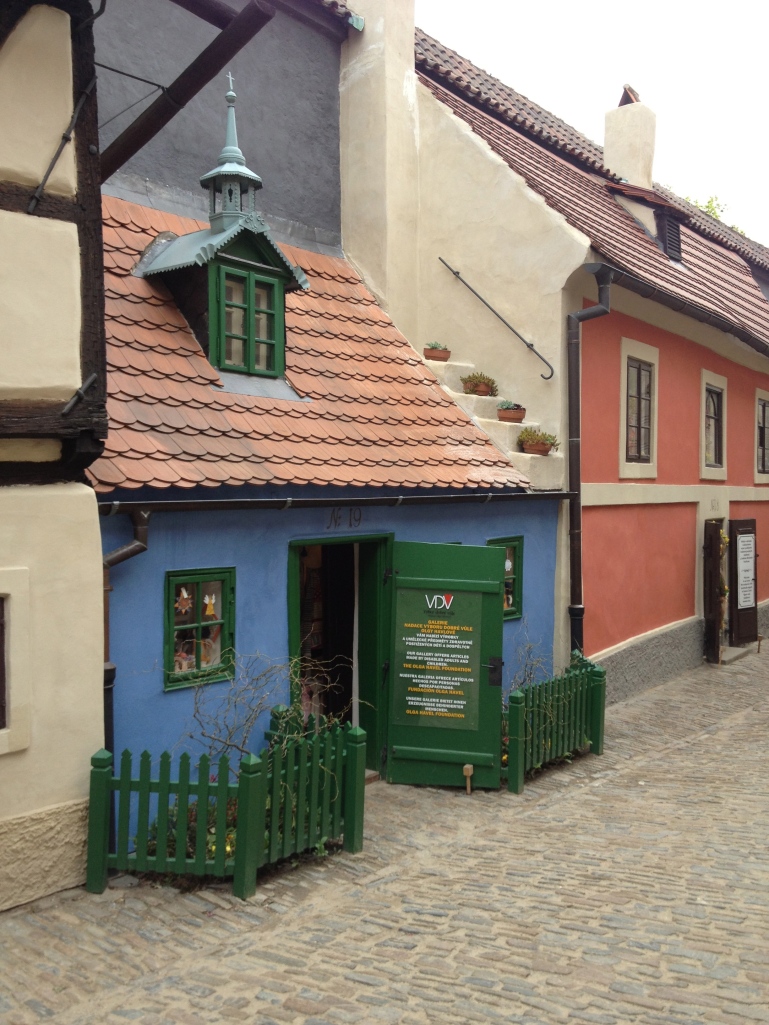 One of the cute little houses on Golden Lane. Most are now stores. 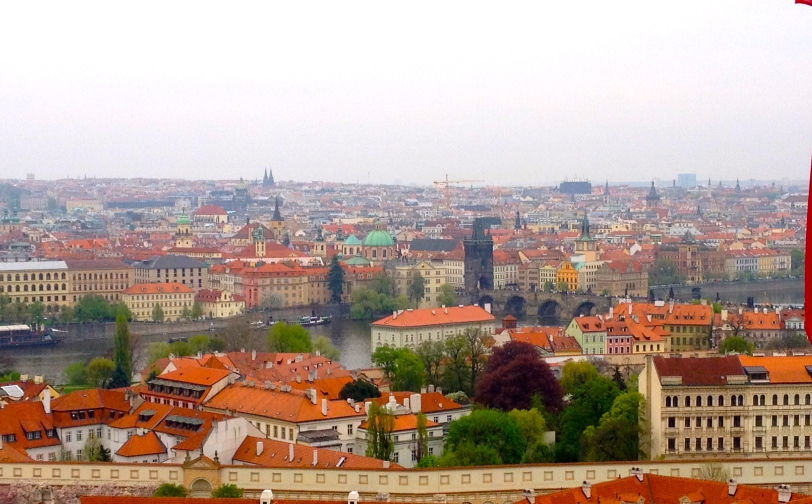 A view of Prague from the castle

We found Prague to surprisingly be a very English-friendly town. A lot of the menus automatically came with English underneath so we didn’t have to ask for the English menu, and pretty much everyone there spoke English, so it was not hard to get around! Case in point, the U Vejvodu, a wonderful restaurant so yummy, we ate there twice!

A restaurant so yummy, we went to it twice!

It would be criminal to go to Prague and NOT have a Pils, considering Plzen, where the beer is brewed is just about an hour up the road!

The beer came in fun glasses and had the oddest pours I had seen – a lot of head at the top, which apparently is the proper way to do it!

Our last day, we just kind of wandered – which is easy to do in a city that has so much to see. The architecture alone is enough to keep you occupied, and you are always looking up to see what original marking each building has! 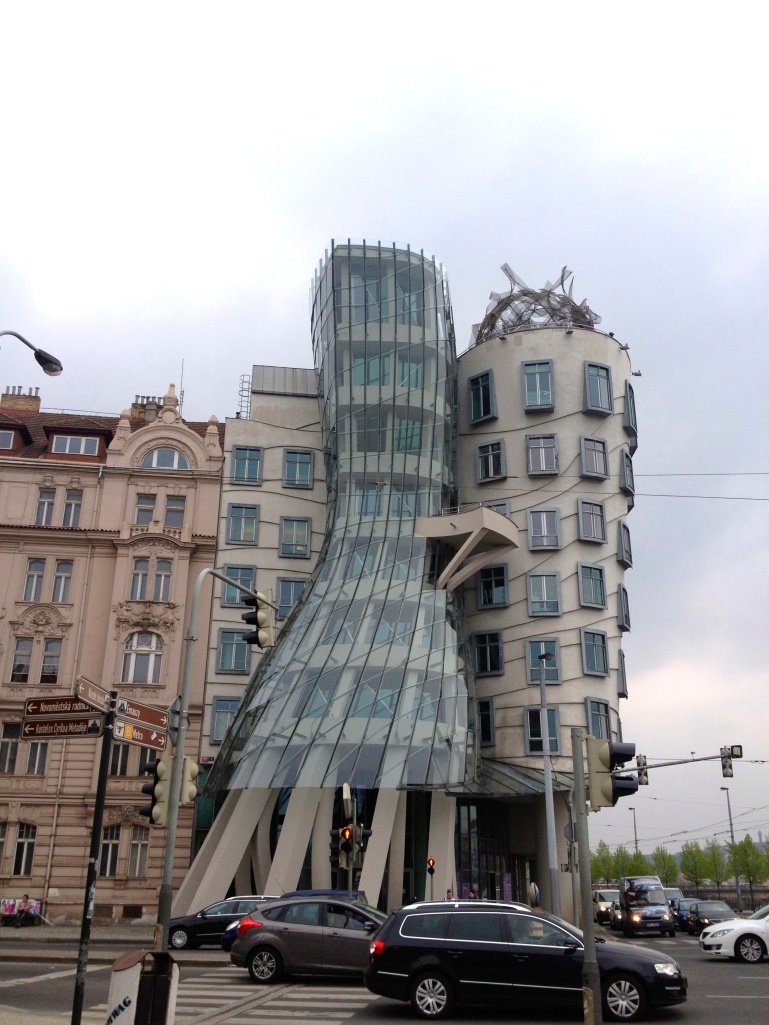 The “Dancing Building” cool – but didn’t quite in to the Prague architecture!

Final Impressions : I would go back to Prague. Apparently, pick-pocketing is pretty rampant, but that’s about as far as the crime goes. I never felt unsafe, nor did I feel anyone trying to reach in my bag or pockets. It’s like in any town over here, just remain cognizant of your surroundings, and you will be fine. The city itself is gorgeous, and a great stop on any European tour.