A look back to John and I’s first major trip in Germany!

Where: Munich
When: April 2013
Hotel: King’s Hotel First Class
Why Munich: John and I discussed a few ideas of where we wanted to go for our first trip together in Germany, and Munich was on both of our lists. To be perfectly honest, I wasn’t as excited about Munich at first because every time I heard that city name, my first thought would go back to the 1972 Olympics and scary images of crazy terrorists in stocking masks on balconies. Unfair to hold the city against that one memory? Absolutely – but because that was really all I knew about the town, aside from the fact that it was also the host for Oktoberfest, I wasn’t really sure what we would find. But, the unknown sometimes holds the best surprises, so I thought – why not see what Munich had to offer?

Regardless of my “iffiness” on what Munich would be like, I was super excited to have my husband in country with me (he had just arrived a couple of days before) and was even more excited to be taking a road trip with him! Munich is about a two-hour drive from Stuttgart and we got on the road! Now, of every wonderful thing you hear about the Autobahn – no police, no speed limits – you never hear about the horrible traffic jams, or “Staus” in German, that occur fairly regularly and most of the time for no apparent reason at all. So of course, as we were driving down, making great time and excited to get there – boom, we hit a Stau. It was a complete standstill – which in Germany, is really just an opportunity to turn the car off, get out, stretch your legs, have a smoke and walk the dog. It’s actually quite entertaining and a great way to distract yourself from the fact that you are sitting in a parking lot instead of the wondering why in the world we aren’t moving.

The Autobahn is great until you get caught in the nightmare that is a German traffic jam.

After sitting for 45 minutes for no apparent reason but getting a nice chance to take pictures, we were back on our way to Munich and thankfully hit no other issues along the way! After dropping our bags off at the hotel, King’s Hotel First Class (which hit my three hotel musts: affordable, good location and good reviews on TripAdvisor), we set off to explore the town!

German hotels are funny – instead of having a traditional bedspread, the double beds come complete with individual covers. Great news if your spouse tends to steal them during the night! 🙂

Munich is in the heart of Bavaria – which means beer (bier), pretzel (bretzel) and sausage (wurst) are king – which means our destination, Andescher am Dom, was the perfect spot for dinner. The Kloster Andechs sits outside of Munich, and is fully operated by Monks at a monastery where they also brew their own beer. Luckily, they opened a restaurant in the heart of Munich, next to the beautiful Frauenkirche.

The Andescher am Dom is the perfect place to get beer, pretzels and sausage! All staples of Bavaria!

No trip to Munich is complete without a trip to the Hofbrauhaus, which is entrenched in Munich’s steep history. Dating back to the late 1500s, it was also one of the beer halls used by the Nazis to hold rallies before being almost completely destroyed in WWII.  Most of Munich was destroyed in the war, but thankfully, the residents choose to rebuild it as it looked pre-war as opposed to making it look more modern. The city is too charming to imagine it any other way.

The Hofbrauhaus is a must-visit! This was the first time I had ever seen, let alone drank a 1-liter beer. But the energy is amazing and it was such a fun time!

Day 2 was a full day of site-seeing:

The Munich Residenz, a former palace of the Bavarian Monarchy, was heavily damaged by Allied Bombing in WWII, but the massive building was beautifully restored by the 1980s. 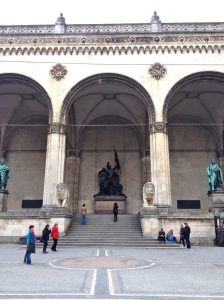 Right across from the street from the Residenz are the stairs where Hitler was arrested and sent to jail where he wrote “Mein Kopf.”

Lunch at the “Haxnbauer” the next day was trying out another Bavarian staple – the Schweinshaxe (Pork Knuckle); John ate it. Final report – the skin reminded him of pork rinds and the rest was, well, pork.

John with the Schweinhaxe – I opted for the Kase Spatzle, which is really just fancy Mac & Cheese. I still think my choice was better! 😉

While walking around, we noticed a bunch of people  on a lookout at the top of a steeple in the middle of the historic section. Let it be known that it was John’s idea to climb up the stairs!

From the ground, it really didn’t seem like the top would be too bad too get to, and for 1,50E each with promises of amazing views – we were all in!

We had no idea that there were more than 300 stairs to climb to get to the top (I counted on the way down, and while the exact number I can’t remember, I do believe it was around 350!) – and not just any stairs, tiny and windy stairs that were so cramped, you had no choice but to climb single-file…which made for especially interesting situations when people were coming back down! But I have to admit, the views were definitely worth it!

The Frauenkirche from St. Peters

Final Impressions: I have to admit, Munich is one of my favorite places. We have been back there twice since our first visit – once with my mom, and more recently for Oktoberfest (more on that later – when we cover the amazing German festivals). The people are friendly, the energy of the city (or more specifically, the beer halls) is contagious and every time I have gone, I have discovered something new. There are still parts I want to go back for – to see a soccer game in the crazy space ship Allianz Stadium, watch the people who surf in the river that runs through the English Gardens in the middle of the city and to visit their Christmas Markt. Munich is  just a fun and fascinating place. I am already looking forward to going back!